In The News - Trying to Sue the Scientific Method

An Article over at Cracked.com lists some people who have tried to sue the Scientific Method (and thankfully lost).

If you don't feel like reading the entire article here is a brief synopsis.
The lawsuits include:

1. A lawsuit stating the Large Hadron Collider was going to destroy the Earth by a botanist.

4. A lawsuit stating that water retained all the medicines that have been diluted in it, no matter how diluted the water was.

5. A lawsuit that vitamins cure AIDS. (you have to check out the picture on the page, it is classic)

6. A lawsuit by scientists against the government to change the status of polar bears from threatened to endangered and a counter-suit by oil and steel companies to get it removed all together.

7. And a lawsuit against NASA for putting a 300 kilogram bullet into a comet which caused changes in the natural balance of the universe. (Best quote from the article "Which was awesome, because not nearly enough space missions are directed by Michael Bay.")
at December 26, 2008 No comments:

Email ThisBlogThis!Share to TwitterShare to FacebookShare to Pinterest
Labels: In the News

Since I have such an awesome view from my work-space for once, I figured I would post it. I have been here since August but this is the first time I thought to bring my camera and take a picture of it. Those are the Wasatch Mountains in the background. 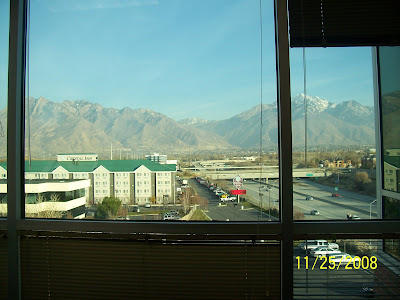 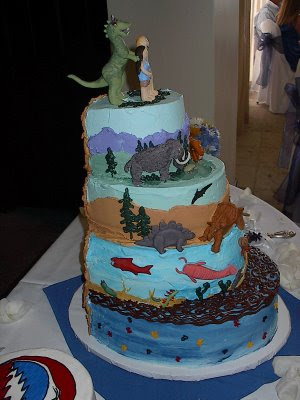 I love it. This is the Wedding cake from my Grad School friend over at DinoChick.com. Needless to say this would never have flown at my wedding but I love it none the less.
at November 11, 2008 1 comment:

In The News: VP Debate and the Environment

One of my major concerns as a geologist is the environment. In regards to that, Governor Palin has come across as not only ignorant but down right backwards on her thinking. I think Biden's comment of "drill, drill, drill" hits the nail right on the head. Personally I think that instead of wasting time and money on more drilling we could spend the same time and money on renewable resources and get the return not only sooner, but then we would be sustainable.

However, the main focus of this rant is on Palin's comment about global warming at the VP debate:

IFILL: ... Let's talk about climate change. What is true and what is false about what we have heard, read, discussed, debated about the causes of climate change?

PALIN: Yes. Well, as the nation's only Arctic state and being the governor of that state, Alaska feels and sees impacts of climate change more so than any other state. And we know that it's real.

I'm not one to attribute every man -- activity of man to the changes in the climate. There is something to be said also for man's activities, but also for the cyclical temperature changes on our planet.

We have got to clean up this planet. We have got to encourage other nations also to come along with us with the impacts of climate change, what we can do about that.

As governor, I was the first governor to form a climate change sub-cabinet to start dealing with the impacts. We've got to reduce emissions. John McCain is right there with an "all of the above" approach to deal with climate change impacts.

We've got to become energy independent for that reason. Also as we rely more and more on other countries that don't care as much about the climate as we do, we're allowing them to produce and to emit and even pollute more than America would ever stand for. So even in dealing with climate change, it's all the more reason that we have an "all of the above" approach, tapping into alternative sources of energy and conserving fuel, conserving our petroleum products and our hydrocarbons so that we can clean up this planet and deal with climate change.

How does that even make any sense? If somehow McCain wins, he better not die.
at October 03, 2008 No comments:

Email ThisBlogThis!Share to TwitterShare to FacebookShare to Pinterest
Labels: environment, global warming, In the News

Dino Pic of the Week - For the week of Sept 14th 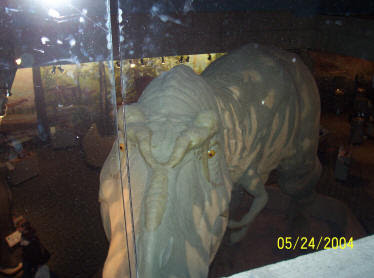 This picture was taken at the Museum of Science at Boston, MA. The T-Rex is on the floor below in the dino section but you can get a pretty cool view of it from the upper floor.

Dino Pic of the Week - For the week of Sept 7th

I figured since the title of my site is "Dino Jim" I should actually represent some dinos. Well I am starting a Dino Pic of the week segment here on my blog. 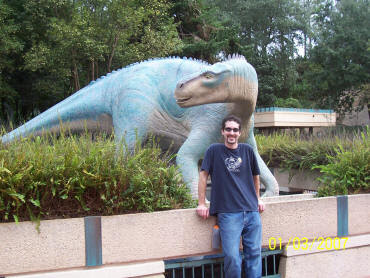 This picture was taken outside of the dinosaur ride in the Animal Kingdom at Walt Disney World. The dino depicted is the same one from Disney's Dinosaur, the Iguanodon Aladar.
at September 11, 2008 No comments: