Geology of the National Parks Through Pictures - The Jefferson Memorial 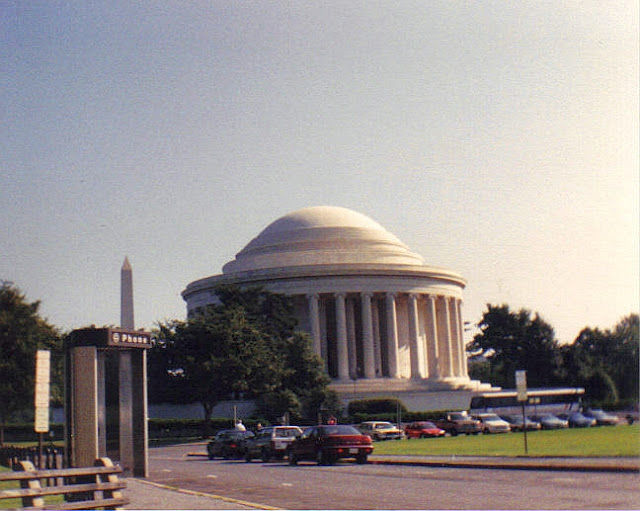 View from the front (circa 1990). Like the Lincoln Memorial, the Jefferson Memorial is comprised of at least seven different build stones from across the country.

1. The memorial itself is constructed of white Imperial Danby marble from Vermont. Imperial Danby marble is actually the Lower Ordovician, Columbian Marble member of the Shelburne Formation. The Shelburne Formation includes three different rock units; the Sutherland Falls marble, the Intermediate Dolostone, and the Columbian Marble. The Shelburne Formation formed from the metamorphism of Cambrian to Ordovician age limestones that were metamorphosed during the Early Ordovician. Located on Dorset Mountain in Danby, the Danby Quarry is the world's largest underground quarry and is one of the largest producers of marble in the world. The Columbian Member is roughly 500 to 600 feet thick and is a white, massive, medium-grained marble that is composed primarily of calcite. There are also small instances of pyrite, chalcopyrite, muscovite, and chlorite that give the marble some green or dark streaks. The marble usually weathers white, but can vary to dark grey. Due to the strong similarities between the Sutherland Falls Marble and the Columbian Marble, it is often difficult to differentiate between the two, but unlike the Sutherland, contorted forms are not conspicuous within the Columbian and the markings usually have a linear pattern.

2. The dome is constructed of Indiana limestone, also known as the Salem Formation and also used in the Lincoln Memorial. The Salem Formation is a Middle Mississippian age (335-340 million year old) light-grey to bluish-grey pure calcarenite limestone that crops out between Bloomington and Bedford in the south-central portion of Indiana. Quarrying of the stone began in 1827 and has continued up to the present day with nine different quarries all mining the same formation. Indiana Limestone is a "freestone", which means that there is no preferential cracking, jointing, or splitting. This also means that blocks of the limestone can be planed, hand-worked, or otherwise manipulated without fear of the rock breaking in a preferential direction. The limestone is 97% pure calcite with microscopic foraminifera and bryozoan fossils found throughout. 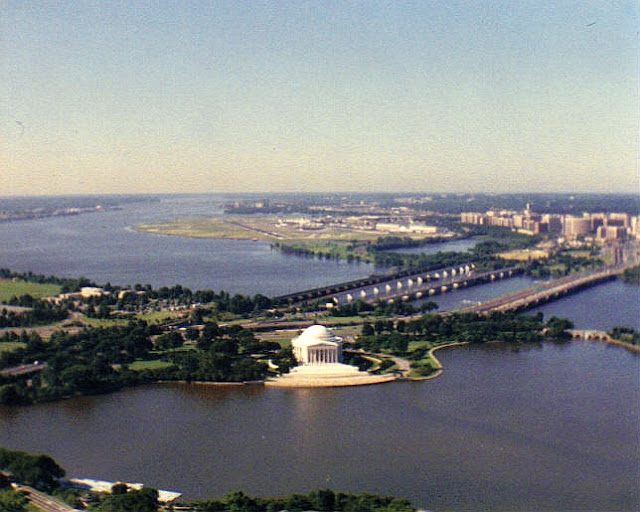 View from the top of the Washington Monument.

3. The foundation and circular terraces are made from Georgia granite. Despite the enormous amount of data regarding almost any other piece of stone in this memorial, or most of the other Washington D.C. memorials, there isn't much information regarding which "Georgia granite" was actually used in the construction of the memorial. My assumption (and it is only an assumption) is that the granite in question is the Elberton Granite. Elberton Granite is a "monumental grade" granite, meaning that the granite has a "uniform texture and color, freedom from flaws and general suitability for polishing and carving as well as resistance to weathering". It is also one of the few granites to be actively quarried in Georgia during the 1930's, when the Jefferson Memorial was constructed. Elberton Granite is part of the Lexington-Oglesby Blue Granite Belt that extends southwest past Lexington, over an area 25 miles long and 15 miles wide. The granite has a blue-grey appearance and is predominantly made up of three minerals, white felspar, greyish quartz, and the black flecks of biotite. The Elberton granite formed from an igneous intrusion within the Georgia Inner Piedmont region of eastern Georgia during the Mississippian, ~320 million years ago. 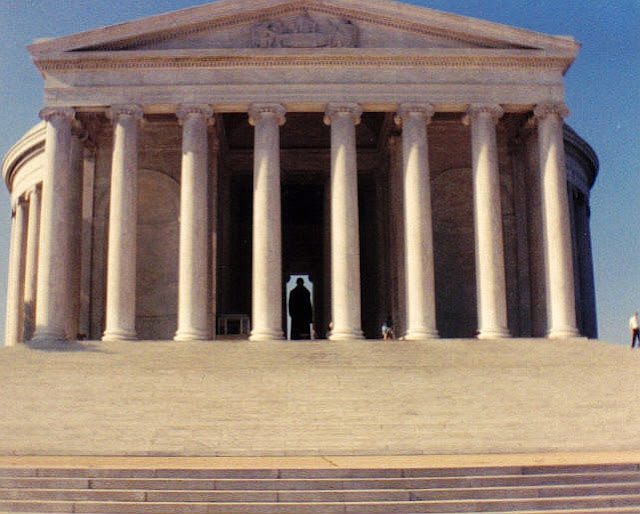 4. The interior walls of the memorial are constructed of white Georgia marble that is also used in the Lincoln Memorial. Although there are several different "varieties" of marble within Georgia, they all seem to be variations of the same marble deposit, Murphy Marble. The Murphy Marble Belt runs from North Carolina down through Georgia and centers on Tate, Georgia, where the Georgia Marble Company mines the marble. It is the Georgia Mining Company that provided the marble for the Lincoln statue. The specific variety of marble for the Lincoln statue comes from the Cherokee White Quarry, which is mixed in among folded gneisses and schists within the Murphy Marble Belt. The Cherokee White Marble is a partly dolominitic but nearly pure calcite marble. These marbles have been extensively quarried since 1840. The Murphy Marble started off as a Lower Cambrian limestone that was eventually metamorphosed and folded numerous times during the lower Paleozoic from the Middle Ordovician through the Early Mississippian.

4. The floor is made of Tennessee Pink Marble. Also used in the Lincoln Memorial, the Tennessee Pink Marble is interesting in that it actually isn't a marble, it is a limestone, meaning it was never metamorphosed like the Yule Marble. The "marble" even includes such sedimentary structures as cross bedding, bryozoan fossils, crinoid fossils, and stylolites. The stone is part of the Holston Formation, which formed 460 million years ago during the Middle Ordovician, along the continental shelf of Laurentia (the northern continent). The Tennessee Pink Marble is found along the eastern part of Tennessee, near Knoxville. 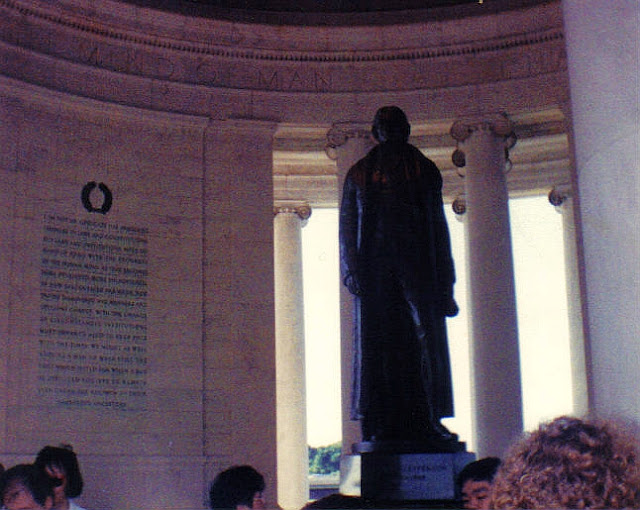 The bronze statue of President Jefferson

6. The statue of Jefferson is composed of bronze and rests on a black Minnesota granite. Like the "Georgia Marble" listed above, there are no specific references for the "black Minnesota granite", especially considering that granite is very rarely, if ever, found "black". The best assumption I can make about which building stone was used for this (without seeing the rock in person) is that the pedestal is actually composed of a gabbro. Gabbro, like granite, is a course grained, intrusive, igneous rock, so in essence they will have a similar appearance. Unlike granite though, gabbro is composed of mostly dark colored minerals without any quartz, unlike granite which has mostly light colored minerals and is predominantly quartz (a light colored translucent mineral). Within the state of Minnesota, the main gabbro being quarried at the time of the construction is the Duluth Gabbro Complex. The Duluth Gabbro Complex began intruding into the Minnesota host rocks approximately a billion years ago during the Late Precambrian. The Complex is made up of several different rock types from repeated igneous intrusions over a ~200 million year time span. These rock types include anorthositic gabbro, normal gabbro, ferogranodiorite, and granophyre. The oldest rock of the complex is the anorthositic gabbro, which is made up of 75-90% the mineral labradorite, a black colored mineral, making this a very black rock indeed. It is my hypothesis that the Jefferson pedestal is composed of this anorthositic gabbro (until I am able to get more information).

7. The statue of Jefferson also has a gray Missouri marble ring surrounding the base. Similar to the Tennessee Pink Marble above, the Missouri Marble not really a marble, but a limestone. One of the ways that this can be identified is the presence of fossils and stylolites, both of which would have likely been destroyed if the rock were to be metamorphosed. Unfortunately the specific rock used in the Memorial is not identified and limestone is found all across the state of Missouri. However, the Missouri state capital building used limestone in its construction and it was noted that once the interior limestone was polished, it gained the distinction of being called "marble". Based on the time period of the Capital Building's construction (1915-1917) and this common misnomer of the rock, I feel that the same rock was used for the Jefferson Memorial. The Capital interior stone is known as "Napoleon Gray marble" and can be found not only in the state capital but also in the NY Stock Exchange and the Legion of Honor: The Fine Arts Museum in San Francisco. The Napoleon Gray is more commonly known as Phenix Limestone, from the nearby town of Phenix, or geologically it was called the Burlington and Keokuk limestones. These limestones (the Burlington and Keokuk) are difficult to differentiate and are typically grouped together as part of the Osagean Series. The Burlington and Keokuk limestones formed during the flooding of North America 325-360 million years ago during the Early Mississippian. This flooding produced a shallow inland sea, called the Kaskaskia Sea, which allowed for the deposition of many fossils including crinoids, brachiopods, corals, and bryozoans. 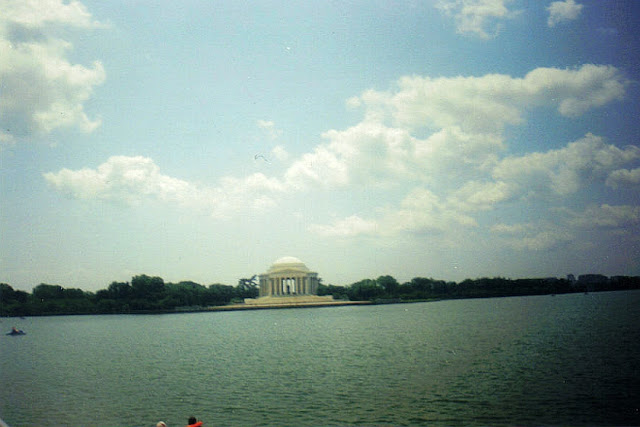 View of the Memorial from across the Tidal Basin. From this angle you can see straight through the memorial.