This article is an update of an article I wrote for my website. The links and grammar have been updated and all references to Wikipedia have been removed (I have included links to more reputed websites instead.) I soon hope to have the entire article updated on the website but for now this is the only location.

Disclaimer - This is going to be a geological overview of the movie Dante's Peak. I am not going to focus on the plot, the acting, the directing or anything of the sort. This is purely a scientific critique on the movie and one from my own mind, so do not take that into effect on whether or not you are going to like this movie. In "science fiction" movies the role of the science advisors are often outranked by the director or other people in the movie and the science gets left out. This means that the bad science of the movie is often not a result of a bad advisor. So do not take my critique of the science as a direct shot at the advisor.

Of all the Geological Movies that I have seen this is actually the most accurate that I can think of. This critique will be more of a confirmation and helpful understanding of the facts than a ripping apart of the movie to expose the plot holes. Now onto the geological review. I will also make some time notes so that you can coincide when that comment is for in the movie.

- Geological Critique -
- The Story Basis -
The basis for the story is actually the eruption of 1980's Mount Saint Helens, which was used as a backdrop for the erupted mountain at the end of the movie as well for a scene within the crater of the mountain. The current status of several other mountains located within the proximity of Mount Saint Helens also played a part in the science of the movie (University of Maryland).

- Columbian Eruption -
- The Eruptions Itself -

0:01:30 - The first sequence of the movie depicts an eruption in a foreign country. The eruption results in a lot of damage and the girlfriend of the main character, Harry (Pierce Brosnan), dies. There are two main activities that are associated with this eruption, mud rain and lava bombs. Later we find out that these events took place 4 years before the events of the main story and in the country of Columbia. Since the movie was made in 1997, the latest this eruption could be is 1993, but it was likely earlier than that (time for writing the script). Also there are several possibilities for volcanoes in Columbia. The picture on right shows 6 of the major Columbian volcanoes (USGS). Going through them can help narrow down which eruption is depicted in the movie:

Galeras - One of the most active of the volcanoes. The last major eruption was in 1886 but a smaller eruption did occur in 1993 which resulted in the deaths of several scientists. Although, the scientists died because they were sampling in the crater when it erupted. The main town near the volcano is Pasto about 18 km from the volcano, although there is a closer town about 11 km away. The scientists were killed or injured by lava bombs.

Dona Juana - Very little activity of this volcano. The only known historical eruption is an extended eruption from 1897 - 1906. Nothing since.

Purace - This is another of the more active volcanoes in the region with the most recent eruption in 1977. Although, very little information is recorded on this eruption and it was only classified as a VEI 2. This is not likely the eruption in the movie.

Huila - Last known eruption was around 1555. The only activity since is a constant steam column and hot springs.

Nevado del Tolima - Last known eruption was in 1943 with the last major eruption occurring 3600 years ago. The eruptions in the last 2 centuries have all been minor, but explosive.

Nevado del Ruiz - The last known eruption was in 1991, but the eruption in 1985 was one of the most devastating in South American history. The eruption completely buried the nearby town of Armero and cause lahars that traveled more than 100 km. In 1984, the early days of volcanic activity, there was no team of volcanologists that could be sent out, but by the time of the eruption a team was constructed that could go anywhere in the world (USGS).

So the most likely result for the eruption in the movie is the 1985 eruption of Nevado del Ruiz. A second possibility could be Galeras, since several scientist did die and it takes place in the right year, but the scientists that died were in the crater and it does not seem as dramatic or even as active as the volcano is portrayed in the film. That type of drama and activity more closely relates to Nevado del Ruiz.

- Columbian Eruption Products -
So now the question is, since the eruption is likely based on actual events, are mud rain and lava bombs typical of large scale eruptions and what are they anyway? First off, some definitions for volcanic ejecta:

Tephra - Is any air-fall material the gets erupted out of a volcano.
Lava Bomb (AKA Volcanic Bomb) - This is a lump of molten rock that gets shot up into the air and solidifies on its way back down. Typically they form aerodynamic shapes while in flight.
Mud Rain - Is rain that falls through or from an eruption cloud.

First off, the mud rain. When a volcano erupts with a large tephra cloud, the particles in the cloud act as water condensation points. This is essentially the beginnings of a rain cloud. These tephra clouds commonly produce rain with the tephra mixed in causing it to rain mud. So most eruptions, especially in humid climates will often have some if not a lot of mud rain (synapses.co.uk). 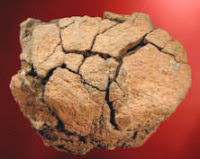 Volcanic bombs are named by the shape they produce. The shape is a result of viscosity of the magma, where the more viscous the magma the more defined the shape. Now very few of the bombs are visible in the movie but what we would expect from this type of eruption would be a bread-crust bomb (picture right) which is most of what Mount St Helen's erupted. This is because the outside cools quickly but since there is so much gas and lava still on the inside, the bomb continues to expand, cracking the outer crust, and making it look similar to bread (gc.maricopa.edu).

0:03:51 - So looking back at the movie if you look at the lava bombs that are actually visible, you can see most, if not all, of them have this general shape and appearance.
Now the variety of sizes in the movie include small ones, entirely possible, to ones large enough to destroy the front of the pickup truck. These lava bombs also hit things so hard as to leave major dents in them and even destroy the ground (or the pickup truck) where they land. In real life all these things can occur. Lava bombs can grow to become over 5 meters in diameter and can be shot several kilometers from the vent depending on the force of the eruption (Geotimes). Also, they are usually traveling at such a great rate of speed that they can damage and possibly destroy anything in their path (pictured left are impact holes) (LCC).
at May 04, 2009