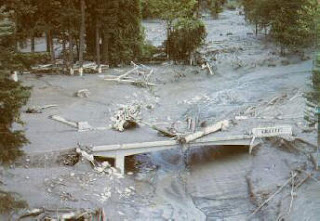 1:18:48 - So now we get the lahars. First off, what is a lahar? It is a rapidly moving mixture of rock, debris and water originating on a volcano (pictured on left). They form from large amounts of rainfall, the rapid melting of snow and ice off the volcano, or displacement of crater lakes (USGS). So far so good, this seems to be exactly what is happening in the movie. The volcano warms up the snow and ice built up on the volcano and sends it down into the town as a lahar. Lahars can develop anytime after an eruption, but usually due to rainfall from the eruption itself the lahar usually occurs soon after. The rainfall then mixes with the ash in the air and on the ground and forms this debris flow with the density of concrete.
My only problem is that shouldn't the source of the lahar, the ice and snow, have melted the previous day with the scorching hot lava flows and all the heat being released from the volcano then? Like I said, most lahars are produced by rainfall, like the Mount Pinatubo eruption, but many are produced by melting, which includes Mount St. Helens. Unfortunately, we can not compare this one to the Mount St. Helens eruption, since that was a one time, blow your top, eruption, not an extended eruption like this one (SDSU). Also, since this crater does not have a lake that is not a possible source, although it does mix with a dammed lake further down the mountain which increases its outflow (size). So unless the lava flows were isolated to just the region that Harry was in before and not along the entire top of the mountain, and assuming that when it erupted the eruptive material only came out one side vent of the volcano, instead of the top, then this scenario is possible. Even still, most of the snow and ice should have melted the previous day with the eruption and the gas and ash released. So, I give this as another problem with the movie.
- Pyroclastic Cloud - 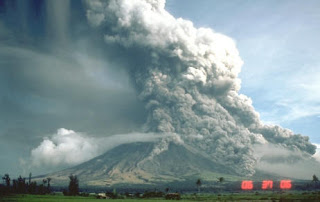 1:27:30 - So finally we have the last major eruption of the mountain. This produces the pyroclastic debris flow, which is usually the most destructive part of a volcanic eruption. The cloud consists of high density, hot and dry rock fragments and volcanic gases, which can move at over 200 kph and range up to 700oC. The cloud is usually so hot that it can burn anything in it's path instantly (USGS).
Pyroclastic clouds form from the eruption cloud that is spewed into the air. The eruption cloud then forms into a mushroom shape, which eventually collapses. This collapsed structure is what forms the leading edge of the pyroclastic debris flow. The debris flow consists of two parts, the basal part, which contains the rock debris, and the upper part, which contains the gas and ash. The formation of the debris flow can occur within seconds of the eruption and completely decimate everything in its path (USGS). So in Dante's Peak the formation of the pyroclastic flow occurs pretty much exactly as it is seen in real life.
The speed that these can move varies widely with each volcano and even within each debris flow but typically the speed ranges between 80 and 200 kph, which corresponds to about 50 to 125 mph. So a truck driving away from these can escape a slow moving pyroclastic flow, but can a truck with no tires escape? Well essentially, they are already halfway across town when the pyroclastic flow started and they could likely move at least 20/30 mph, so I see no reason that this is not plausible at all. Their main goal was to try and get to the mine, which they reach, just when the pyroclastic flow arrived. This is seemingly impossible but when it is laid out I think they could have done it.
at June 09, 2009