Demonstrating a Volcanic Eruption with a Soda Bottle

A soda bottle is an enclosed space with a cap. It contains liquid soda as well as carbon dioxide (CO2) added into the mixture. When shaken up the CO2 is mixed into the soda producing higher amounts of pressure on the bottle. When the pressure is release, either through removing the cap or puncturing the bottle in some way, the gas and the soda are forced out of the bottle. 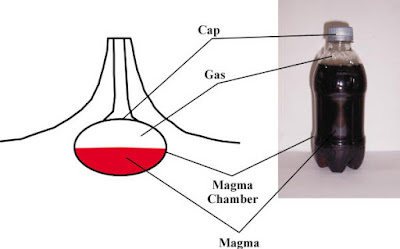 So, a magma chamber is a lot like a shaken soda bottle. The shaking produces the same effect of having the gases dissolved in the magma. Although, there have been recent studies that have shown that the number of volcanic eruptions increase the following year after a major earthquake.

Step 1: Use a small bottle of soda. Shake the bottle up for a little bit (roughly around 5 minutes). Describe the similarities between a magma chamber and a soda bottle while you are shaking this up.

Step 2: Place the bottle on the ground and puncture the cap with something. I find a Phillips head screwdriver the best. You don’t want to open the cap because then the soda will explode sideways, instead of upwards.

Here is a video of the demonstration as well.
You can check out other Out of The Box teaching ideas as well as a downloadable pdf of this one at my website by clicking the link.
Posted by Jim L. at 9:00 AM

Email ThisBlogThis!Share to TwitterShare to FacebookShare to Pinterest
Labels: Out of the Box, Soda, volcano