0:14:42 - While Bruce Willis was attempting to blow up his oil rig with a shotgun, the people at NASA were trying to figure out a way to prevent certain disaster from befalling the human race. Some of the ways to destroy an asteroid that I found on NASA's NEO website seem to be the same ideas that the movie was mocking, including "firing nukes at it" and using large sails to deflect it (NEO). In the movie several methods were brought up to deflect and/or destroy the asteroid. The methods include:

1.The first method uses a spread-focus laser, which is rather odd since I can not seem to find the words "spread-focus laser" anywhere on the internet except under the context of the movie. This usually means that nothing of the sort exists. Ok, so they made up technology, that is not new, we will just focus on the purpose of the laser. The purpose is to heat the asteroid to the point of fracture, and then what? Disintegrate the asteroid? This is one of the worst idea that they could have come up with. So you shatter an asteroid t

he size of Texas and get what? Instead of 1 asteroid the size of Texas you get millions to billions of still very large asteroids hitting the Earth at roughly the same time (Figure above). This result is possibly worse then doing nothing, if not just as bad.

2. The second method is to use large sails that collect solar winds to move the asteroid like a sailboat (Figure to the right). OK, this is feasible and NASA actually has thought of this one. The problem here is that the asteroid is only 18 days away and the sail would literally do nothing in that time. The sail is useful only over a long period of time since a little change adds up to a lot of change over time.
3. The third method is to fire a whole arsenal of nuclear weapons at the asteroid in the hopes to deflect/destroy it. In regards to destroying it see #1. Also all the nuclear weapons in the world fired at a chunk of rock the size of Texas moving at ~22,000 mph is going to do nothing. In deflecting it you have a similar problem. Except to deflect it, the nukes need to be fired at an angle compared the trajectory, which is directly towards Earth. In 18 days we do not have enough time to get the nukes off planet and still hit it at an angle where it is far enough away to move significantly out of Earth's path. 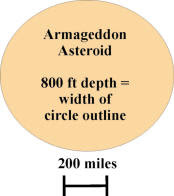 4. The last method is the one they decide to go with. To blow up the asteroid from the inside out. There are several problems and they are pretty much ignored. The problems that they did not take into effect include:
A. The asteroid is 780 miles across, a 800 ft deep hole is not the center of the asteroid (Figure left). 800 ft is actually only 0.02% into the depth of the asteroid. An explosion at this depth would produce the same effect as if it were a surface detonation. 800 ft is so shallow in fact that in the Figure to the right 800 ft is equal to the thickness of the line around the outside of the asteroid.
B. The explosion then creates two halves that would clear the Earth (in the movie) but any fracture created in the surface detonation is not going to run the remaining 779+ miles through the center of the asteroid and still have enough force the deflect the two halves around the Earth.
C. The remaining debris from the explosion is still going to decimate the Earth since the asteroid is not going to break evenly in half and several large pieces are still going to hit the surface.

So in conclusion for this section, the main way to save the Earth from certain destruction is find the asteroid earlier because nothing they do here will have any effect. Although if the asteroid was smaller, by several orders of magnitude, you know a feasible size, then drilling and blowing it up might actually be possible but then there are still problems B and C. So pretty much the solution they have come up with, is to blow apart a make believe asteroid (since nothing of that size exists) with a method that would not work on something that large. So far so good.
Posted by Jim L. at 7:00 AM