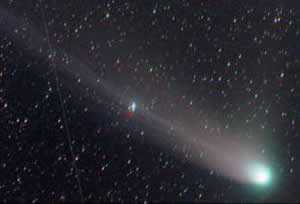 0:23:50 - So eventually it is revealed that the rogue asteroid about to crash into Earth was caused by a rogue comet, how fitting. Essentially what happened was a comet hit the asteroid belt displacing the asteroid, as well as several smaller asteroids, pushing it right in our path. This is what I described above as the optimal situation for NASA to not know about the path of asteroid destined to hit Earth far in advance. So at least that makes sense. Now on to the fact that a comet knocked an asteroid the size of Texas out of the asteroid belt. How big must the comet have been and would it have been possible?

First off, what is a comet? Using the definition above, a comet is a ball of ice and gas that has an eccentric orbit around the sun. Most comets known have an orbital period of greater than 200 years and some if not many have an orbital period greater than 1000 years. So it is possible for there to be comets out there that we know nothing about and that their orbits in the future will take them directly into the path of the asteroid belt. In fact, it is likely (Encyclopedia of Science).

There are 3 main parts to a comet. The nucleus, the coma, and the tail. The nucleus is the solid part of the comet usually made of frozen gas and water. The coma is evaporating water and gas that comes off of the surface of the nucleus that gives the nucleus a cloudy appearance, similar to the asteroid effect in the movie. The tail is formed when the coma is pushed away from the nucleus by solar winds (NASA). The nucleus is the only part that we are going focus on since it is the only solid part and therefore the only part that will have an effect by hitting an asteroid. Most comets average about a 10 mile diameter but some have become much larger then that. Recent evidence has shown that some distant comets might have a diameter as large as our sun (Space.com). The comets we want to focus on are the distant ones with either very long orbital periods or the ones that get captured by the solar system causing them to enter with an unknown orbit. This type of comet would cause the problem seen in the movie.

Would a comet, even a very large comet, cause a relatively stable asteroid to suddenly and dramatically go off of its normal orbit and fly into Earth?  Typically comets have a very low tensile strength, meaning they fall apart easily, and the only thing holding them together is a rocky crust (NASA). But get one of those things moving fast enough and with a large enough diameter and I believe that is is possible to dislodge an asteroid into the Earth's path. Although it is very very unlikely, it is still possible. And since an asteroid the size of Texas is not a problem (see previously) this is likely to happen on a smaller asteroid that would still have devastating effects on the Earth. But in regards to the movie I don't think that even a very large comet will knock the Armageddon asteroid so far off course that it would come straight for us. If anything the comet would hit the asteroid, altering its orbit slightly and eventually the asteroid might hit Earth some years or more likely centuries in the future.

I found this website at Arizona.edu that can predict the effects of an asteroid impact based on some information from the asteroid and how far from the impact you are. Here are the factors that I put in for this asteroid:

Distance from impact - 12,451 miles (20,038 km)
This is half the circumference of the Earth, or in other words as far away from the impact as you could get.

Projectile Density - 2,000 kg/m3
This is a density midpoint between porous rock and dense rock which is what the asteroid likely is.

Impact Velocity - 7 miles/s (11.3 km/s)
This is based on an initial speed of 22,000 km/hr which is then increased due to the combined activity of the Earth and the moon.

Impact Angle - 65o
This is just a generic angle.


Target Type - Water of depth: 3,900 meters
This is the average depth of the Atlantic Ocean

The results from the website indicates that the impact produces an earthquake at the opposite side of the Earth with a magnitude of a 13.6. Combine that with a devestating air blast. So, in essence, the Earth will be wiped clean, if not much worse. You can check out the results, and play around, for yourself.
Posted by Jim L. at 9:00 AM