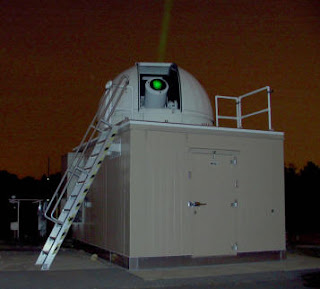 0:04:47 - The initial discovery of the asteroid was by an amateur astronomer looking through a rather large personal telescope. Most people would wonder why an amateur would be able to discover the asteroid far sooner than a professional whose job it is to detect such things. Well in actuality more amateurs discovery asteroids and comets than professionals. The reason for this is simple. Professional are usually more caught up in teaching, research, and verifying discoveries while the amateurs have the time to just search the skies. And most amateurs search with the intent of discovering the next comet so that they could name it (SpaceWar). 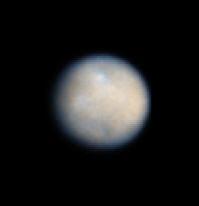 0:10:27 - During the discovery of the asteroid they move the Hubble Telescope to take pictures of the "anomaly". Hubble typically is used to view any object in space. It has been used from visualizing the Big Bang to scouting possible settlement locations on the moon, so this is not out of the ordinary. Also the images produced resemble those already available from the telescope (pictured left is Ceres) where there is no clear definition but colors are possible (NASA). The only problem I can see is that they seem to move the mirror rather quickly, but since they already know the location of the asteroid it might not take very long to locate it.
0:11:02 - When describing how NASA could "let" this happen the director states that the "object collision budget" only lets them track about 3% of the sky. In actuality there is a program called the Near Earth Object Program, which automatically tracks asteroids and comets that pass near Earth and hence might cause a collision somewhere in the near future (100 years) and most objects that pose a possible threat are detected years in advance (NEO). Also, only being able to study 3% of the sky is not terribly accurate since you are studying only the most important regions. Asteroids will not be coming from just any direction, most of them are concentrated within the Asteroid Belt so that narrows the search down considerably. So what ends up being only 3% of the sky in actuality is 15, 20 or even 30% of the danger zone. Something catastrophic would have to occur to cause such a change in an asteroid's trajectory for NASA not to have known about it in advance.
- Size - 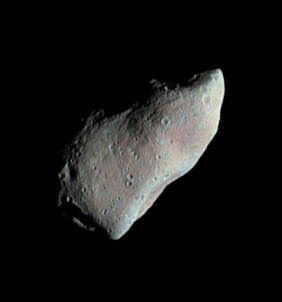 0:10:54 - When describing the size of the asteroid they state that it is about the size of Texas. Texas is roughly 780 miles across while the largest asteroid in the asteroid belt, Ceres, has a diameter of only 588 miles at its widest point (NASA). The second largest asteroid is Vesta, which has a diameter of about 330 miles, about a quarter the size of Texas (NASA). So what does this mean? That either the description of the asteroid size is ridiculous, since nothing is even close to the size of Texas in the asteroid belt, or the movie made up an asteroid to make this more dramatic.
The interesting thing here is that they started to say a more exact description of the asteroid's size indicating that it was "97.6 billion..." and the guy got cut off. So what could he have been referring to? Size? Mass? Something else? Size does not seem logical since I can not think of anything that would be listed in billions. Mass is typically referred to in kilograms and using Ceres as an example, the asteroid has a mass of 8.7 x 1020 kg which is about 11 factors larger than a billion (NASA). So that is not it either. My guess is something else but I have no idea what this might have been. 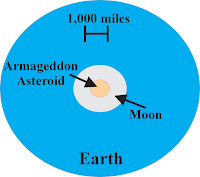 The asteroid is specified as a "global killer", where not even bacteria will survive. Even though an asteroid of this size does not exist lets pretend that it does. How big must an asteroid be to be considered a global killer, because eventually something is large enough to wipe out all life on Earth? The asteroid mentioned previously that wiped out the dinosaurs was 6 miles across. This is about 0.8% the size of the Armageddon asteroid. A similar sized asteroid is thought to have contributed the Permian extinction as well, which wiped out about 95% of life on Earth (Space.com). So if a 6 mile asteroid could cause a 65-95% extinction of all life on Earth, a 780 mile asteroid would pretty much rip the planet in half. I would imagine that an asteroid twice that size would cause the extinction of most life on Earth, but it just might spare the bacteria. So lets just say that an asteroid about 30 miles across will be the smallest asteroid considered a "global killer", but that is just my own estimation.
At the end of the scene the asteroid is mentioned as being only 18 days away from Earth. Considering the speed that asteroids travel and the proximity that several asteroids get to Earth, this at least, is both logical and possible.
Posted by Jim L. at 1:07 PM