"October's theme is going to be "Desk-crops." This can be any rock or other geological* specimen that you have lying around your office/desk/lab that has a story to tell. The spookier the better. Photos and/or illustrations are very important (although not absolutely required)."

The main post is already up (linked above) but I hope to be added late.

So here is my sample for this Trick-or-Treat surprise. Most geologists would be able to identify this off the bat but let me go into it's story before I give away the surprise ending. 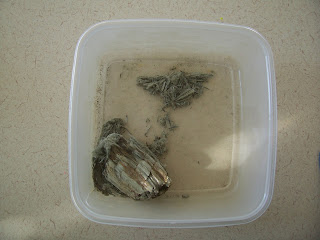 It all started when I moved down to Texas to go to Texas Tech for my Masters degree. My friend from undergrad, Steve, also was going to Texas Tech at the same time. We got moved into offices next door to each other in a very very old building (one of the oldest on campus I believe). My current office mate had another office in the seismo lab and Steve hated his office mate so I got Steve moved into my office with me. Well we were in there 2 years together before I moved on after my Masters. Steve decided to stay at TTU to do his PhD so I had to move all my stuff out and give him a little more free space. Well it turns out there was a bunch of stuff already in the office when we moved in, we just never paid it much attention. So we decided to split it up among ourselves (since it was basically free) and add some extra rocks and maps to our collection. Well in the back of this one cabinet I pull out this tray with the pictured above mineral on it just sitting in the open. And Steve and I both go "S*#T!!", we have been sitting in the office for 2 YEARS with an open specimen of chysotile basically open to our breathing air.

And now for those of you who don't know what chrysotile is, it usually goes by its more common name of Asbestos.

Well now we have this open thing of asbestos in front of us and we do what any good geologist would do. We both wanted it so we split it in half, stuck it in a tupperware container and added it to our respective collections.

So that is how I happened to have and keep this cancer inducing agent in my drawer at my desk.