You might encounter a real Stegosaurus if you can go back to the late part of this geological period, a good one for dinosaurs

Until the recent discovery of the Gigantotasaurus fossil, 3 tons bigger, T. rex was thought to be the largest dinosaur of this dietary class... aaaagh!

Named for its cattle-like horns, this 9-tonner whose name means "bull lizard" had the largest head of any known land animal

If a bite that could puncture a car roof wasn't enough, T. rex's teeth have recesses where these live; if the bite didn't kill you, the infection would

All the answers as well as any other previous GeoJeopardy! questions can be found over at my website by clicking the link.  Videos used in the questions are the ones originally presented in the clue and have been obtained from the Jeopardy! archive site j-archive.com.
Posted by Jim L. at 9:48 AM No comments:

When a substance is known as “naturally-occurring,” we have a tendency to think of it as something that is possibly beneficial, or at the very least benign – certainly not harmful. However, many metals and minerals that occur naturally in the Earth’s crust are toxic to humans. In some cases, their deadliness was known from the beginning; in others, their usefulness obscured or outweighed the symptoms that warned of their toxicity.

Asbestos
Asbestos was once considered a “miracle mineral.” Ancient Greek writers told stories of tablecloths that could simply be tossed in the fire after use, emerging not only unscathed, but cleaner and whiter than before. Medieval alchemists were so entranced with this material that they hypothesized it came from the hair of salamanders, which could walk through fire and survive. By the time of Marco Polo, however, people knew that asbestos was mined from the earth.

In 1820, an Italian scientist became the first to run a successful business based on asbestos products – fireproof clothing sold all over Europe. Soon after, many items began to incorporate asbestos into their design: stage curtains, gaskets and packing for steam engines, paint and tar paper, and cement. The inclusion of asbestos in construction materials would continue into the 1970s for the simple reason that asbestos was an incredibly effective flame retardant. No doubt countless lives were saved from fire.

However, this “miracle mineral” was not the safety boon it appeared to be. When asbestos-containing products sustain damage, tiny, needle-like fibers are released into the air. Once inhaled, these fibers can cause serious health problems, including lung scarring, asbestosis, and mesothelioma, a rare and deadly form of cancer. One reason this cancer is so dangerous is that mesothelioma symptoms can take anywhere from 20-50 years to surface after exposure, by which time the disease is often in its final stages. Because of these dangers, asbestos has largely been replaced with alternative fire-resistant substances in newly-manufactured construction materials.

Lead
A soft, malleable metal, lead is useful for its low melting point, high density, and resistance to corrosion. It was accessible and easily worked with, and therefore made the ideal medium for the famed plumbing system of the Roman Empire. Lead was not only used for pipes, but also as a component in coins, flatware, cosmetics, spermicide, and food seasonings.

However, even the ancient Romans understood that exposure to lead had serious health-related consequences. As we now know, even low levels of exposure can cause chronic lead poisoning. The dangers of acute lead poisoning were apparent in Renaissance Europe, where it may have been used in some royal assassinations. In modern times, lead was used as a fuel additive, despite early evidence that the vapors were toxic to the workers producing it.

Though lead was removed from gasoline – as well as other products like pipes and house paint – beginning in the mid-1970s, the metal continues to be used in products from car batteries to radiation shielding. Unlike asbestos, lead can still be found in many construction materials because it usually has to be ingested to be poisonous. Initial symptoms of lead poisoning – including headache, abdominal pain, memory loss, and kidney failure – may be confused with other conditions, though more severe neurological problems soon follow. Like asbestos, there is no amount of lead ingestion, however small, that is considered “safe.”

Mercury
Mercury is notable for being one of the few metals that exists as a liquid at room temperature. Historically, mercury had a wide variety of applications, from the practical (preserving wood, developing daguerreotypes) to the recreational (handheld games, fishing lures). Amazingly, both the ancient Chinese and the ancient Greeks thought of mercury as a substance that promoted good health and long life, and doctors continued to use it into the 20th century to treat conditions ranging from depression to constipation to syphilis.

In modern times, most people know mercury as the liquid in thermometers, though it is also found in other measurement devices such as barometers (air pressure) and sphygmomanometers (blood pressure). Thimerosal, an organomercury compound, has been used as a component in dental amalgam and a preservative in vaccines. The latter use triggered a controversy over the possible role of thimerosal in the development of autism, though the most recent studies do not support a link between the two. Regardless, the FDA reports that thimerosal has been phased out of nearly all vaccinations required for young children.

However, parents are right to be concerned about exposing their children to any form of mercury. The substance is extremely dangerous if ingested, inhaled, or absorbed through the skin. Like lead, mercury poisoning affects the central nervous system, resulting in symptoms as diverse as sensory impairment, lack of coordination, hallucinations, and social phobia. Despite the dangers, small amounts of mercury can still be found in certain cosmetics, fluorescent lamps, neon signs, and telescopes.

If you would like more information about any of these substances, please visit:

http://www.fda.gov/BiologicsBloodVaccines/SafetyAvailability/VaccineSafety/UCM096228
Posted by Jim L. at 1:47 PM No comments:

I finally have time to post some of the Quotes of the Week that I have been stockpiling. This one seems a rather odd quote in general. But to top it off, it was completely out of nowhere. This has absolutely nothing to do with the material preceding it in the paragraph. The last part of the article that this may have been in reference to was at least 10 to 11 pages previously. So it was rather out of nowhere, making it even more bizarre.


"A cyclops will always have the nostrils above the single eye."

You can also check out all my other Quotes of the Week over at my newly created page for them by clicking this link.
Posted by Jim L. at 2:30 PM No comments:

Some woman to my wife: "Nobody wants coal in their stocking." 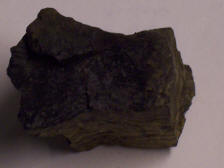 Here is to the holiday of geologists. Where we all wish for coal in our stockings.
Posted by Jim L. at 9:00 AM No comments:

Time for GeoJeopardy! Fridays, because it's a holiday. At least for some of us.

Geologists dig up and study these organic remains, whose name is from the Latin for "dug up"

Until it's cooled, the object seen here was this substance

All the answers as well as any other previous GeoJeopardy! questions can be found over at my website by clicking the link.  Images used in the questions are not the ones originally presented in the clue but are my interpretation of what they might have been and still get across the intent of the clue. Images used are linked to their sources.
Posted by Jim L. at 1:33 PM No comments:

It is that time again for GeoJeopardy! Fridays, because I am so busy I almost forgot it was Friday.

The ancients called jade lapis nephriticus, as they thought it a stone that could cure this organ's ailments

A beryl named for a New York financier isn't johnite or pierpontite, but this

All the answers as well as any other previous GeoJeopardy! questions can be found over at my website by clicking this link.
Posted by Jim L. at 5:02 PM 4 comments:

A follow up to my pevious news of th day, which states that the NASA scientists discovery of arsenic based lifeforms may not have been entirely accurate

Global warming (global climate change?) strikes again. And this time it may be fatal.

If an island state vanishes, is it still a nation?
Posted by Jim L. at 9:30 AM No comments:

It is that time again for GeoJeopardy! Fridays, because those of us in school need a distraction from Finals Week.

Montana's state fossil, the Maiasaura, had this type of mouth, like the platypus

The teeth from Maryland's Astrodon were cut open in 1858 & revealed this pattern, hence its name

All the answers as well as any other previous GeoJeopardy! questions can be found over at my website by clicking this link.
Posted by Jim L. at 1:58 PM No comments:

Apparently the sealevel rise following the melting of the ice sheets was not as steady as originally though. Looks like it could have jumped up to 2.5 meters/century.

Global Sea-Level Rise at the End of the Last Ice Age Interrupted by Rapid 'Jumps'
Posted by Jim L. at 2:37 PM No comments:

Scientists find that not everything is as simple as we thought. Apparently life can form even in the absence of life forming minerals.

Arsenic-munching germ redefines "life as we know it"
Posted by Jim L. at 10:24 AM No comments:

Time for GeoJeopardy! Fridays, because why not.

The modified Mercalli scale ranks these 1-12: 1 - not felt except by few, 12 - total destruction

Basalt is an igneous rock & rock salt is this type

All the answers as well as any other previous GeoJeopardy! questions can be found over at my website by clicking this link.
Posted by Jim L. at 12:23 PM No comments:

I have another Quote of the Week for ya from my readings. This one I think is self explanatory.

"Although we have referred to relatively few examples, and with differing degrees of confidence, our model for climate distribution of shallow marine trace fossils appears to be robust."

You can also check out all my other Quotes of the Week over at my newly created page for them by clicking this link.
Posted by Jim L. at 12:16 PM No comments: