Last year I had posted a series of updates going into a geological movie review of Armageddon in depth (You can go here for a link to all the individual updates). One of my readers has recently made a discovery that answers an unsolved question I had about the movie. In the post I state:


After the boosters separate, they then state "single engine (ok), press, demi-go." Now demi-go is another phrase that does not seem to have made it anywhere in the greater world. So whatever that is I also do not know. 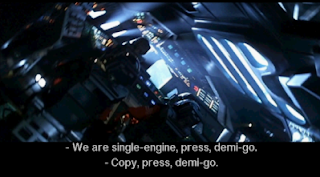 A recent contact by Brian Pontz has suggested that the "single engine (ok), press, demi-go" is not actually what they were saying. The subtitles clearly show them saying "demi-go" but this may be made up by the script-writers to mimic what is actually said by astronauts. Brian suggests that they are actually saying "Single Engine Press to MECO". NASA explains this phrase as meaning "that orbit can now be reached on only one main engine". Since this makes much more sense in context of the movie, especially at this particular point in the movie, and it actually being a real-life phrase, I would say that Brian is right and the subtitles are wrong.

I would like to thank Brian for bringing this to my attention and I welcome anyone else who finds out something I missed or made a mistake on to contact me with the correct information.
Posted by Jim L. at 1:13 PM