This isn't a post about a specific topic but more of something I have been thinking about for a while. I recently came across this one graph (directly below) and no matter what the article said (because what I initially thought is NOT what the article said) I had one opinion on the subject:

The graph above (Veron, 2008) illustrates the growth of large reefs and their relationships to extinction events. If you add on the current extinction event to the far right side of the graph, I think it will be plainly obvious that reefs are the cause of mass extinction. What? No? How could that be??? Well, it's not. And that is not what the paper was trying to say, but that is how it looks upon first viewing of the graph (at least, to me). The point of the paper was to show that reefs are good places to study mass extinctions because they build up then dissapear across an extinction event. But, again, that is not how it looks to me as I scan across the article.

And this is the problem with science. Both as people doing the science and those reading the science. Sometimes, your first impression is wrong. Step back. Reanalyse what you are seeing, and try to think what else it could be. Sometimes the obvious answer is the correct one. Sometimes it isn't.

Another case is that of people misreading data. This is from the perspective of someone reading the paper but I think the writers missed something. The below graph (Hoffmeister and Kowalewski, 2001) is my case in point: 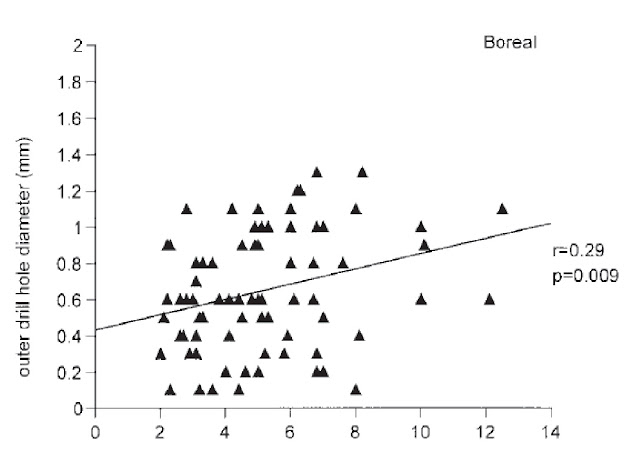 The authors stated this about the graph (as well as some other associated graphs):


"Spearman rank correlation shows a significant positive correlation in ..." (emphasis added by me)

Now , I don't know about you but I don't see significant, I don't even really see positive, I see a whole lot of random dots with a line that shouldn't have been place through the data. This is my point. Sometimes there is no correlation. Step back. Look at the data with new eyes, what you see is not always what is there. Take your time.

Science is a slow process. It takes a lot of man hours to do even simple experiments. Don't mess it up by throwing bad or missinterpreted data out there, because that is all people are going to see. They aren't going to notice your 100's of hours in the lab or the countless field hours. They are going to see one bad dataset and assume the rest of the information is junk as well. Don't let that happen to you.