Calling for Researchers - Measure your Earth the Oldschool Way

This is a call for people to get out there and try some science the way it was done in the olden days before Columbus screwed us all up (BTW: Side note - Columbus thought he was in India because he had the size of the Earth wrong by about half even though someone calculated it out long before he was born). In my previous post (My failures in science part 3 - Measuring the Earth) I gave an in depth review of my attempts at measuring the Earth last Summer Solstice as well as the history of Eratosthenes who actually did calculate it out. Well the time has come around again for the next Summer Solstice (June 21st) and I will be trying it again (more like on the 20th and the 22nd).

And I call on you all to try it too.

I will reiterate the story a little here.~2200 years ago a man named Eratosthenes measured the size of the Earth by using shadows in Egypt. It turns out he was only off by less than 10%. I tried the same thing and was off by 60%. I feel I have to do better than someone 2,200 years ago, so I am trying it again.

It doesn't matter if you are wrong or don't have fancy equipment all you need is a stick and a ruler to measure the length of a shadow and a car to get some distance between your measurements. You can use Google Earth to measure the distance between the points as well. The more accurate you are the closer you can come to an actual value (theoretically).

This is fun (I swear) and it is calling back to the basics of science.

Email ThisBlogThis!Share to TwitterShare to FacebookShare to Pinterest
Labels: Eratosthenes, Failures in Science, Size of the Earth

My failures in science part 3 - Measuring the earth

The most recent of my science failures involves me trying to measure the size of the Earth in the method of Eratosthenes. If you don't know his tale, basically it was this: ~2200 years ago a man named Eratosthenes lived in Egypt. He noticed that the shadows were different lengths based on his location at the same time of day at the same time of year (the summer solstice). He saw that at noon in one location (Alexandria) there was no shadow and at the same time and date at another location further south (Syene) there was a shadow. This indicated that not only was the Earth round, but he could calculate the size of it. Since he knew the distance between the two locations he used the angular difference to calculate the circumference of the Earth.

Eratosthenes found out that the difference in his angles was 7.2 degs and the distance was 5040 stades. So the size of the Earth was:

This is where I come in. I wanted to measure the size of the Earth this way as well. I realized several things quickly:

1. I needed two locations north and south of each other because the angle of the sun would be the same along lines of latitude.

2. I needed a measuring stick that was perpendicular to a board to measure the length of the shadow.

3. I needed to find out when "noon" was, since daylight noon (the highest point of the sun) is not the same time as clock noon.

4. I needed two locations that fell along the same longitude so that I could calculate a direct polar circumference.

1. Well, I started out. First thing is I constructed a measuring device. 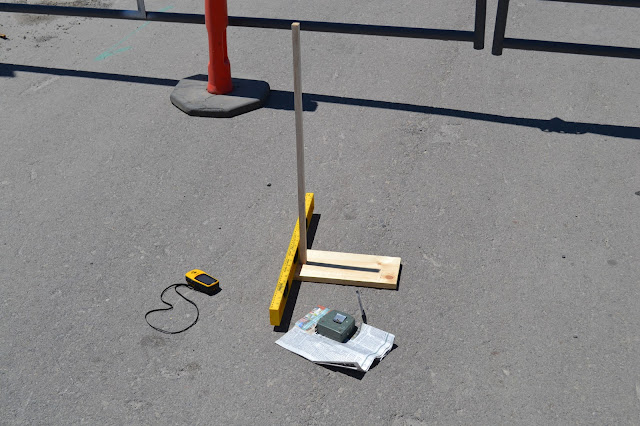 And this is where my problems start. The board was warped. I thought this might have been a good thing since I could then level out uneven terrain easier. But it made the board much more unstable. I used the newspaper to level out the board as best as I could.

2. Calculating out the time was pretty easy. I found out when the sunrise and sunset were and figured out halfway between them. It tuns out it was about 1:30 pm.


3. The way Eratosthenes calculated out the circumference is that one of his locations had no shadow, so I wasn't entirely sure it would work for me where I had two shadows and I was subtracting the angular difference between the two. (A vs B for Eratosthenes, B vs C for me). But I think there should be no real difference. 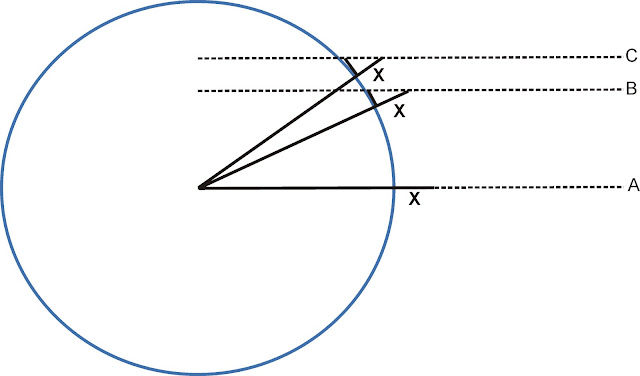 4. I also figured I couldn't measure the two different locations on the same day so I did one the day before the summer solstice (June 20th, 2012) and one the day after (June 22nd, 2012). That way any differences would average out. I picked my first location as outside my geology building. The second location I drove south for an hour or so and when the time got near to high noon I drove towards the same longitude. The second problem I ran into was I didn't realize that the lake south of Salt Lake City (Utah Lake) was directly south of the city, not off to the west like I imagined. I had to take a measurement as close to the edge of the lake as I could get since I obviously couldn't drive to the center of the city. 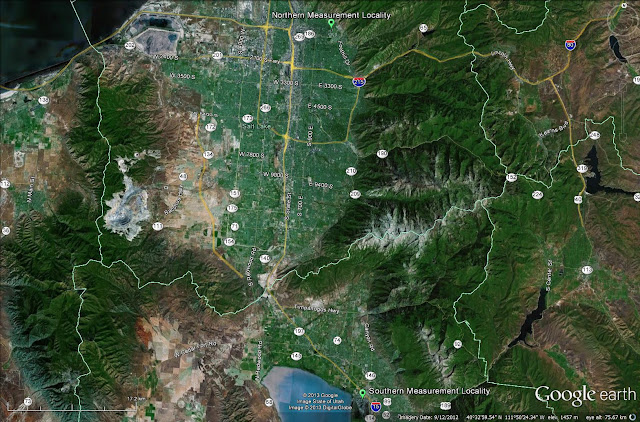 5. So I went out and measured the shadow at the almost correct time. 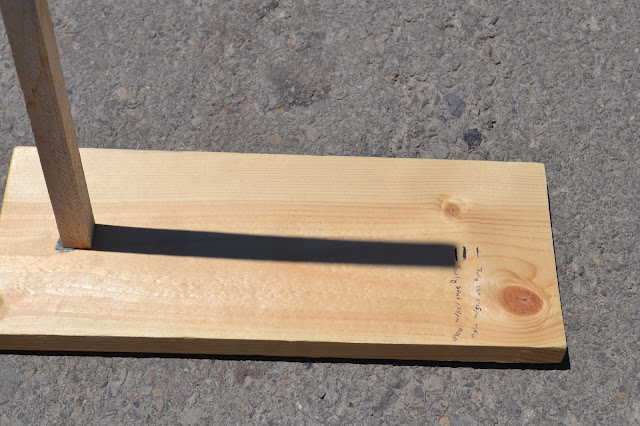 I marked them on the board and you can see I had some error based on wobble of the board. A little wobble means that the shadow doesn't go directly down the board as I liked, so it took a little work to get everything lined up.


The board height was 752 mm, the same at both locations. It was the shadows that changed slightly between sites. With the changes in shadow lengths, I was able to calculate out the angles.

Now where did I fail and how do I fix it:

1. The system that I had built was clearly unstable. Making a newer and better one would surely fix the problems. I was going to add the legs that you can unscrew making it easier to level out and keep it leveled out.

2. Measuring from 2 locations which were clearly not directly north and south of each other added unneeded errors. Figuring out locations ahead of time should fix this. Also maybe some locations further apart.

3. I ran into slight problems besides getting to the localities in that I couldn't measure the angles at precisely the high noon mark. Getting to a site earlier and setting up will fix this hopefully.

4. I don't think there was anything wrong with my math but I could double check that that was all done correctly.

So this year we are going to make another attempt at it and hopefully get better results.