Geological Movie Review of The Day After Tomorrow - Part 6 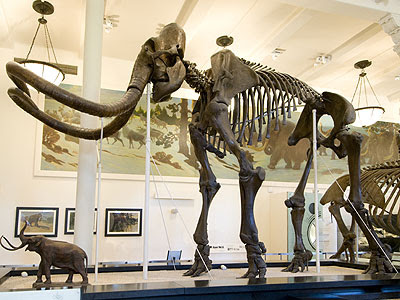 0:38:10 - Our first introduction into flash freezing comes from the mammoth in the American Museum of Natural History (AMNH), which was said to be "perfectly preserved in the Siberian tundra with food still in its mouth and stomach, indicating that it froze instantly which grazing". First off, as far as I am aware there are no preserved mammoths in the AMNH. They do have at least one skeleton though (pictured right). From the looks of it, in the movie they were in one of the Mammal Halls, which displays modern mammals that have been stuffed and posed among a backdrop of their environment. So obviously the movie made up some more information. Moving on.
Besides this, is it possible to 'flash freeze' a mammoth. There are a few examples of mammoths being frozen and preserved to the present. The best preserved example is a baby mammoth which fell into a river and was frozen there (Guardian). There are other animals that have been frozen as well including a cave man with food in his intestines (eScienceNews) and a bison (Atlas Obscura). None of these have evidence of being 'flash frozen' though. Should this frozen mammoth be real, one possible explanation was that the animal fell within a crack in the glacier, (a crevasse if you will) which are usually in abundance and can be tremendous in depth, and the animal was either killed from the fall or injured to the point that death was imminent. After that, the cold weather preserved the remains of the animal intact, hence no flash freezing necessary. And the death is quick enough where food is preserved in the gut. I doubt there has been any remains of a mammoth, or any other prehistoric beast, found frozen with food still in it's mouth. That borders on ridiculous. So this is partially possible, however their analysis of the facts led to bad conclusions.
- Helicopter Popsicle -
0:39:36 - As the storms intensify, we find ourselves in the midst of a flash freezing craze focused on some helicopters. The reason that is given for the helicopters going down was that the fuel in their lines froze. The temperature quoted in the movie as being able to freeze jet fuel was -150°F (-101°C). For military purposes, the jet fuel used in helicopters is either JP-5 or JP-8 (ExxonMobil). JP-5 has a freezing point of -50.8°F (-46°C) and JP-8 has a freezing point of - 52.6°F(-47°C). Jet fuel can, however, even be used beyond this temperature, where the fuel is still able to flow. The limit of this flow temperature is about 6°C below that of the freezing point (iasa.com). So, although the freezing point of jet fuel is much warmer than what they were stating (why make something like that up?), it stands to reason that IF (and that's a big if) the temperature were to drop to -150°F the fuel in the helicopter would likely freeze almost instantly. I don't know if that would take the helicopter down, but at least the fuel lines would be frozen.
- Frozen Air -
0:52:07 - Our main question with the freezing is, how fast can the temperature drop within the center of a storm? It appears that in the movie, the extreme cooling is due to the storm "pulling super-cooled air down from the upper troposphere". One of the main problems with this is that as air descends, it warms up (as stated in the movie). So descending air shouldn't be able to be that cold. And not only that but it is happening in three different storms at the same time. Alright, assuming that air can be brought down from the upper troposphere without warming up because it descends so rapidly (a physical impossibility based on the law of thermodynamics, but moving on), what is the temperature of the air up there? The temperature in the upper troposphere can get down to -50°C (Soich and Rappenglueck, 2013), which is barely above the freezing point of jet fuel as mentioned above but nowhere near the super freezing temperatures that are mentioned as happening in the movie. So could cold air be brought down from the upper troposphere, possibly. Could it be super cold, possibly. Would it be the super freezing -101°C as mentioned in the movie, no way.
1:36:32 - The comment is made in the movie that the temperature is dropping in the eye of the storm at 10°C per second. I like someone's comment on another page (ClimateSight) which stated that in under a minute the air would reach absolute zero. Absolute zero is the temperature where all movement stops (-273.15°C). Let us assume that we are dealing with -10°C as a starting temperature, since people were traveling outside. A bit high maybe but whatever. Starting at -10°C, it would take 27 seconds to reach absolute zero. That is beyond ridiculous, I don't even know what to say about it.
Posted by Jim L. at 11:54 AM