Geological Movie Review of The Day After Tomorrow - Part 3

Geological Movie Review of The Day After Tomorrow - Overview 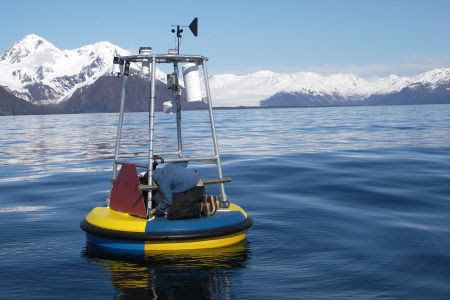 0:08:13 -  This next part of the movie shows some random weather events occurring across the planet. The first one is snow in New Delhi, which is mentioned as being "the coldest weather on record". Since the conference took place in real life from October 23rd to November 1st in New Delhi, we will use that time of year as our indication of what the weather would be like. The average high and low for the end of October is 87°F and 65°F (30.5°C and 18.3°C respectively) (Weatherspark.com). So if it was snowing this would be far outside of the norm. The record cold weather temperature for New Delhi is 30.9°F (-0.6°C), which could produce some nice big fluffy snow. This shows that any snow producing weather would be considered "the coldest weather on record". So in this instance the movie would be correct, if it were indeed snowing.
- Hedland Climate Research Center -
0:09:23 - Monitoring some of these weird weather events, in particular the oceanic temperatures is the "Hedland Climate Research Center, Scotland". Contrary to the UN Conference actually existing, the Hedland Climate Research Center was a made up name. It likely represented the Met Office Hadley Centre which is one of the UK's foremost climate change research centers (Metoffice.gov.uk). Although, the Met Office is in Exeter, UK (Southeastern England) so it is not terribly close to Scotland. They do however monitor ocean temperatures via a system of buoys that are deployed across the world's oceans and ships in the Voluntary Observing Ship Programme (Metoffice.gov.uk). The buoys that are used in real life vary greatly but comparing it to one of the climate change buoys used in Alaska (figured right), they are roughly similar. 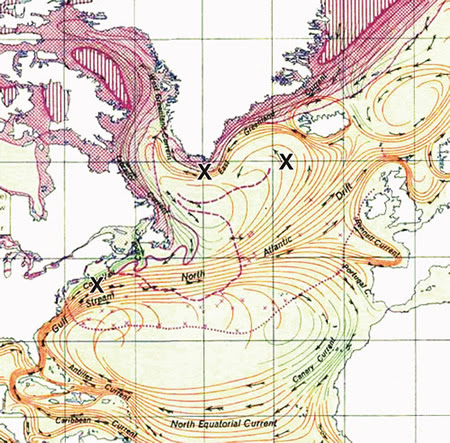 - Dropping Ocean Temperatures -
0:09:55 - The monitoring station in the movie records a temperature drop of 13°C with one of the buoys in the North Atlantic. Although it is blown off at this point of the movie as "rough seas", we later find out that these are accurate. In real life, it has been reported that during the roughest of weather the sea surface temperature (SST) has dropped on average 1.3°C due to storm activity. Hurricanes in particular can drop the SST up to 6°C with the record being held currently with a drop of 9°C after a typhoon (Zhu and Zhang, 2006). A drop of 13°C in this case would either be a cause for extreme alarm or more likely, as is done in the movie, written off as a malfunction with instructions to check it out and keep an eye on it. If the trend continues, then something needs to be done.
0:19:08 - As more buoys are showing the 13°C temperature drop, the scientists are starting to assume that this is not a malfunction and is the result of the Gulf Stream getting shut off as was predicted. It is hard to tell how fast the drop needs to occur to set off the alarm, however it could be assumed that it was over a relatively short period of time. Even in the winter, the water will not cool down that fast with currents and everything maintaining the heat trapped in the water. Even if the Gulf Stream is cut off, which is a must be for the temperature to drop that quickly, the water would basically have to stop flowing and convecting for this to occur. Not a likely scenario. To highlight the buoys shown in reference to the Gulf Stream, the three buoys shown are illustrated on the map to the left (the X's) (GoGreenCanada). It appears that the movie makers picked nice spots for the buoys though since they all appear to be directly influenced by the Gulf Stream. Should the Gulf Stream be shut off then the temperatures of the northern two would definitely be effected. The southern one though I am not sure about. If the Gulf Stream is cut off in the north by Greenland, what happens to the southern extent of the stream? Does the whole thing collapse or does it just get redirected? That I am not sure about. 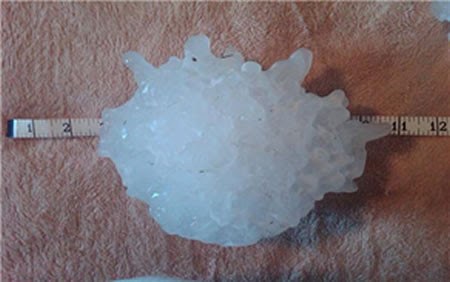 - Hail -
0:11:18 - The next weather anomaly we get is softball- to basketball-sized hail in the Chiyoda District, Tokyo, Japan. Hail forms from the supercooling of water droplets in thunderclouds that instantaneously freeze to debris in the air (dust, bugs, other ice crystals).The hail then travels up and down through the storm gathering layers each rotation through the storm. In essence this means that the larger the storm, the larger the hail (UCAR). Hence a gigantic storm with incredible strong winds can make super sized hail. The hail in the movie looked to range in size from softball-sized up to basketball-sized hail. The largest hailstone ever recorded was 8 inches across (20.3 cm), which is just about the size of the super hailstones seen in the movie (Wunderground). So, although the large amount of these supersized hailstones being rained down at one time is unlikely, the size of the hailstones is possible. I call this one plausible, although unlikely, even with a superstorm.
As for the large amount of hail that was deposited at one time, having lived in West Texas for a couple of years I have seen cars that looked they were pummeled with hammers due to the amount and size of the hail that fell. It is also known that large amounts of hail can fall in an individual storm (NBCNews, Weatherwise) although that is typically smaller particles of hail falling over a prolonged period of time. The more hail that a storm contains requires a steady source of moisture, in the case of the movie, since Japan is an island it should have a ready supply of moisture. A storm would also need to be strong enough to cycle the hail stones enough to make them as large as they are seen in the movie. So, given the conditions in the movie, I see this as unlikely but plausible. 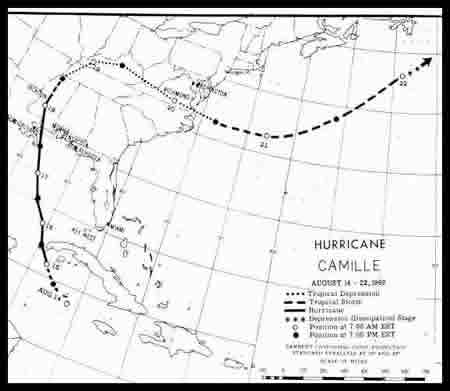 - One Big Hurricane -
0:12:40 - Continuing the weird weather, the news reporter on the TV is talking about Hurricane Noelani, which is possibly the strongest hurricane ever recorded. It is mentioned as hitting an 'island chain" but no more specifics are mentioned. Although the strength of a hurricane can be measured in several different ways (wind speed, amount of damage, central pressure, etc.) the most common method is wind speed. In that regard, the current strongest hurricane on record is Hurricane Camille in 1969 with a wind speed of 174 knots (200 mph, 322 kph) (NOAA). The exact wind speeds are unknown though due to the fact that it destroyed all the measuring devices (Yahoo! News). There are not many Category 5 hurricanes in recorded history but it is possible that there could be a new "strongest hurricane ever recorded", especially considering that 3 of the Top 5 strongest hurricanes were in 2005, one of which was in the middle of October. So, although the end of October is a bit later in the hurricane season, this is still possible.
- NOAA -
0:13:44 - Continuing with the agency name dropping, we come to the "National Oceanic Atmospheric Administration", which if you add an "and" in the middle, is an actual government agency more commonly known as NOAA. This brings up the question though as to why did they make up the Hedland Climate Research Center if they were actually going to pull from real sources on other things. That doesn't make much sense to me, but whatever. In the movie they show the ice core storage room, which is assumed to be housed at NOAA, however I can find no indication that NOAA actually stores any ice cores. From what I have found, it seems as if the U.S. National Ice Core Laboratory (NICL) is the one in charge of the US ice cores and most of the ice cores that are not stored on site in Antarctica or Greenland seem to be stored at the USGS National Ice Core Laboratory in Washington (USGS). It could be assumed though that they are at the USGS in the movie and they just identified it wrong. Simple solution.