Geological Movie Review of The Day After Tomorrow - Part 5 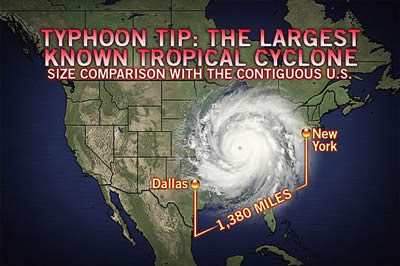 0:31:40 - In the movie, the northern hemisphere is being consumed by three continental sized storms. One is located on North America where "Canadians are reporting tremendous circulation moving down from the Arctic". The second is in Russia where "there's a low pressure system unlike anything we've seen". The third one is over Scotland. They also mention Australia, which has recorded the strongest typhoon on record. This brings up the question, can the Earth sustain three-four continental sized storms, that are in essence one global storm with 3-4 separate aspects of it (pictured in the movie below right)? When looking at other planets in the solar system this does not seem too to far fetched, at first. In 2001 a dust storm encompassed half of Mars (NASA), although Mars does not have any oceans which would interfere with such a storm. On Earth, the largest storm systems that our planet sees on any given year are the Atlantic hurricanes and the Pacific typhoons. The largest storm ever recorded was 1979's Typhoon Tip, whose diameter could stretch from New York City to Dallas, a total of 1,380 miles, with wind speeds up to 190 mph (Scientific American). It would take a storm at least four times that size to equal the one of the continental storms in the movie. The largest storm to have formed in the Atlantic was 2012's Hurricane Sandy, which reached a 1,000 miles in diameter (Huffington Post). The problem with storm formation on Earth (or the benefit of it depending on how you look at it) is that the mix of oceans and continents break up air currents that flow around the globe. The extreme differences between the temperatures of water and land make circulation of air currents nearly impossible to predict (have you listened to your weather forecaster lately?). These differences are what would also limit the size of the storms that the Earth could sustain. The Earth goes through a see-saw type effect where rains in one part of the globe occur as the same time as droughts in another part (USA Today). The atmosphere needs to counterbalance itself. It can not be raining everywhere at the same time, as well as it can not be sunny everywhere. So I would have to say that a global storm made up of 3-4 mini global storms is impossible due to these differences as well as air currents moving these storms around the globe. One of these mini-global storms (for instance only one of the big storms happening, like the North American storm) is entirely possible, however unlikely to occur.
- Climate Influencers -
0:31:57 - It is stated in the movie that the only force strong enough to effect global weather is the sun. There are actually many variables that effect the Earth's weather patterns, the sun being only one of them. As stated in the movie, a shut off of the North Atlantic current also has an impact on the global climate. And although it is true that the ocean has a strong effect on the climate, it is an unequal relationship. Air patterns can shift much more quickly than ocean patterns. Changes in the ocean currents takes 10's-1,000's of years to take place, making it's influence on short term atmospheric changes minimal (USA Today). Man-made influences also play a role in the climate including increasing carbon dioxide in the atmosphere and heat generation by major cities (LA Times). But again, these are slow build ups (at least in the terms of a human life-span). They take 10's of years to influence the atmosphere. One last source of climate influencing factors is the Earth itself. Volcanoes can deliver a tremendous amount of heat, chemicals, and ash to the Earth's atmosphere over a very short period of time. These chemicals and ash stratify within the atmosphere blocking out the sun for most of, if not all of the Earth within days of the eruption producing a nuclear winter. These eruptions have the potential to alter the Earth for millions of years following an eruption (Berkeley.edu). 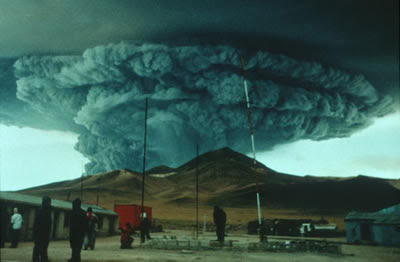 Besides a volcanic eruption, which was not mentioned in the movie so we can assume there was none, the only thing that could influence our atmosphere over the short term (days to weeks) would be extraterrestrial. Should something happen to the sun, like it going out, that would severely effect out global climate almost instantly. Other solar effects like solar flares and solar output do have an impact on the strength of storms and weather patterns but nothing that could be altered over a period of days or weeks. These fluctuations are cyclic and slowly build up and wind down with the solar output. They are also somewhat predictable based on these patterns (Science Daily). The extraterrestrial influence most likely to effect our climate almost instantaneously would be a large meteorite impact. A large enough impact has the same effect as a large volcanic eruption, which would be to put dust and debris into the atmosphere with atmospheric circulation distributing the particles across the globe. An impact along with the volcanic eruptions are what are cited as the main downfall of the dinosaurs (Berkeley.edu). So, in the movie, without a volcanic eruption or a meteorite impact, I would say that anything altering the climate of the Earth within days is near-impossible to impossible.
- Cold Weather Hurricanes - 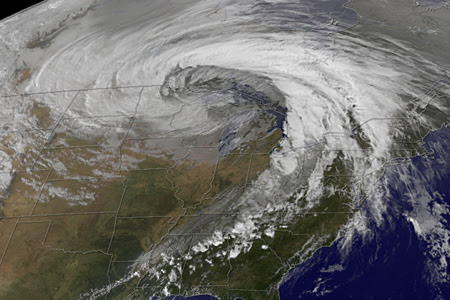 0:41:58 - The movie goes on to state that the weather in Scotland is looking like a hurricane. The major problem with this is that hurricanes don't form over land. They also don't form in cold weather. Well, let us first remove the use of the term "hurricane" since a hurricane has a specific definition of a cyclonic storm that forms in the western North Atlantic ocean. Since these storms did not form there, they are obviously not hurricanes by definition. They are cyclonic storms, cyclones, and cyclonic storms can form over land or water. Cyclones that form outside of the tropical regions are often referred to as mid-latitude or extratropical cyclones (aos.wisc.edu). As in the movie, they are areas of low pressure with winds that flow around the low pressure center, counterclockwise in the northern hemisphere and clockwise in the southern. They occur at a strong temperature gradient where there is a boundary between a cold air mass and a warm air mass. The cold front comes into a region of already warmer air and then starts to rotate around. The storm can then either strengthen or weaken depending on the differences in the gradient. Extratropical cyclones are also known to travel more over land than their tropical counterparts which are associated with water (xweather.org). In the movie, the drastic changes in temperature were directly responsible for the storm formations. So in theory, it could be possible that one or two of the these extratropical cyclones could have formed due to the sudden changes in temperature, which would result in a cold weather front coming into an already warmer area. I am not saying that these could have been super storms that froze everything in site, just that they could exist as a possibility.
- Complete Cloud Cover -
1:30:10 - Reaching the end of the movie we are shown the perspective of the guys in the space station again. But this time, all they can see are clouds of a storm with a 50 mile diameter central vortex. I won't go into the size of the vortex since we have already determined the size of these storms was a little exaggerated, but in regards to the cloud cover, current estimates state that the Earth has about a 70% cloud cover on any particular day (NASA). Even assuming that these super storms could whip up some more moisture, it has already been stated that these storms are forming over land. Storms get their energy and moisture by forming over the oceans. So without the moisture supply of the ocean it is impossible to obtain enough moisture to create complete cloud coverage over a significant portion of the planet, which would be however much the astronauts could see at any one time.
Posted by Jim L. at 1:59 PM