Guest Post: Geology Equipment - It’s Not All Hammers and Shovels

I haven't been doing guest posts lately but this one sounded intriguing, especially given the dearth of posts I have been able to give as of late. Hopefully my posting numbers should pick up again shortly. Enjoy.

Basically, GPR is used like a metal detector, analyzing what is underneath the ground. It uses radar to create an image of what is below the surface. This can help make digs more efficient, as you can avoid hitting objects you want to preserve, and you can tell if there is anything inconsistent beneath the surface. Radar can detect both conductive and non-conductive materials. Although it can easily see conductive materials such as metal and salt water, it cannot see through them.

When it comes to geology, we often think of earth, rocks, and scientists. Some geological tools are pretty basic: rock hammers, shovels, plane tables, rope. We know theoretically that the scientists use some fancy tools and methods in discovering, unearthing, and examining their findings, but we don’t often think about what that equipment is. One of these fancy tools, Ground Penetrating Radar (GPR), is commonly used in bigger projects and it’s important to understand what makes it such a useful tool for geologists to have in their belt.

A great example for the use of this technology is a recent project in Egypt where archaeologists explored the Saqqara Necopolis. A 500 MHz system was pulled across parts of the Sahara in a 0.5 meter grid pattern. This produced images that led to the discovery of buried ruins along the Nile.

Though GPR reveals targets in their exact locations, there are a number of factors that can affect the accuracy of the depth measurements. The speed of the radar signal depends upon the composition of the material being penetrated. GPR calculates depth of a target based on the amount of time it takes for the radar signal to be reflected back to the antenna. Radar signals travel at different velocities through different types of materials. The moisture or clay content of the material also affects the velocity of the signal and thereby giving unexpected results.

But GPR isn't solely used by geologists and archaeologists. Perhaps, a more novel use of GPR's surface measurement capabilities is for law enforcement and national security. Scientists at the Department of Homeland Security have applied an extensive research to what they call the “Tunnel Detection Project”  -- a project that assists the Border Patrol with finding entrances and exits to tunnels that have been created to smuggle drugs, weapons, and people. 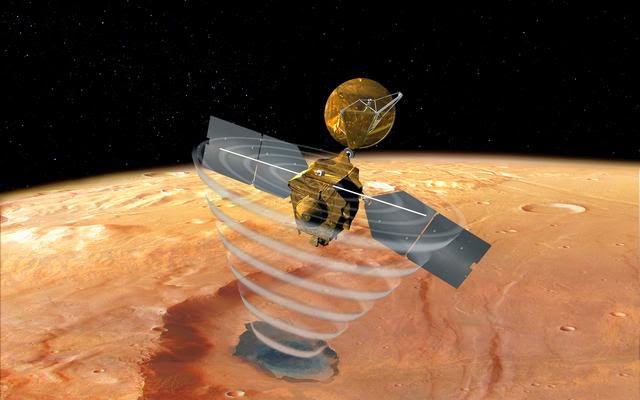 The benefits of GPR even extend beyond our own atmosphere. Since 2005, NASA has been using a surface penetrating radar technology called SHARAD on board the Mars Reconnaissance Orbiter probe to better understand Martian geology.  SHARAD actively observes and records the vertical structure of the upper subsurface Martian layers and has been extremely helpful in locating liquid and ice deposits for further study.

Ground Penetrating Radar is a tool that any scientist should become more familiar with because it can lead to more efficiency and accuracy in discoveries.  Even this basic technology like Radar waves can be used to in different ways to help us advance further in cutting edge breakthroughs.  I wonder what other simple means we can employ out there to better humanity.  What do you think?
at June 12, 2014 No comments: