Geology Through the Radio - Pompeii

Here are a set of the lyrics for instance:

And the walls kept tumbling down

In the city that we love

Gray clouds roll over the hills

Bringing darkness from above

Some questions that could be asked of this song:

1. What event is the song referring to?
2. What are the "great clouds" composed of?
3. What happened to the city that the song is referring to?

Email ThisBlogThis!Share to TwitterShare to FacebookShare to Pinterest
Labels: Geology Through the Radio, volcano

Geology of the National Parks Through Pictures - Dinosaur National Monument

My next post about the Geology of the National Parks Through Pictures is a fairly local park. 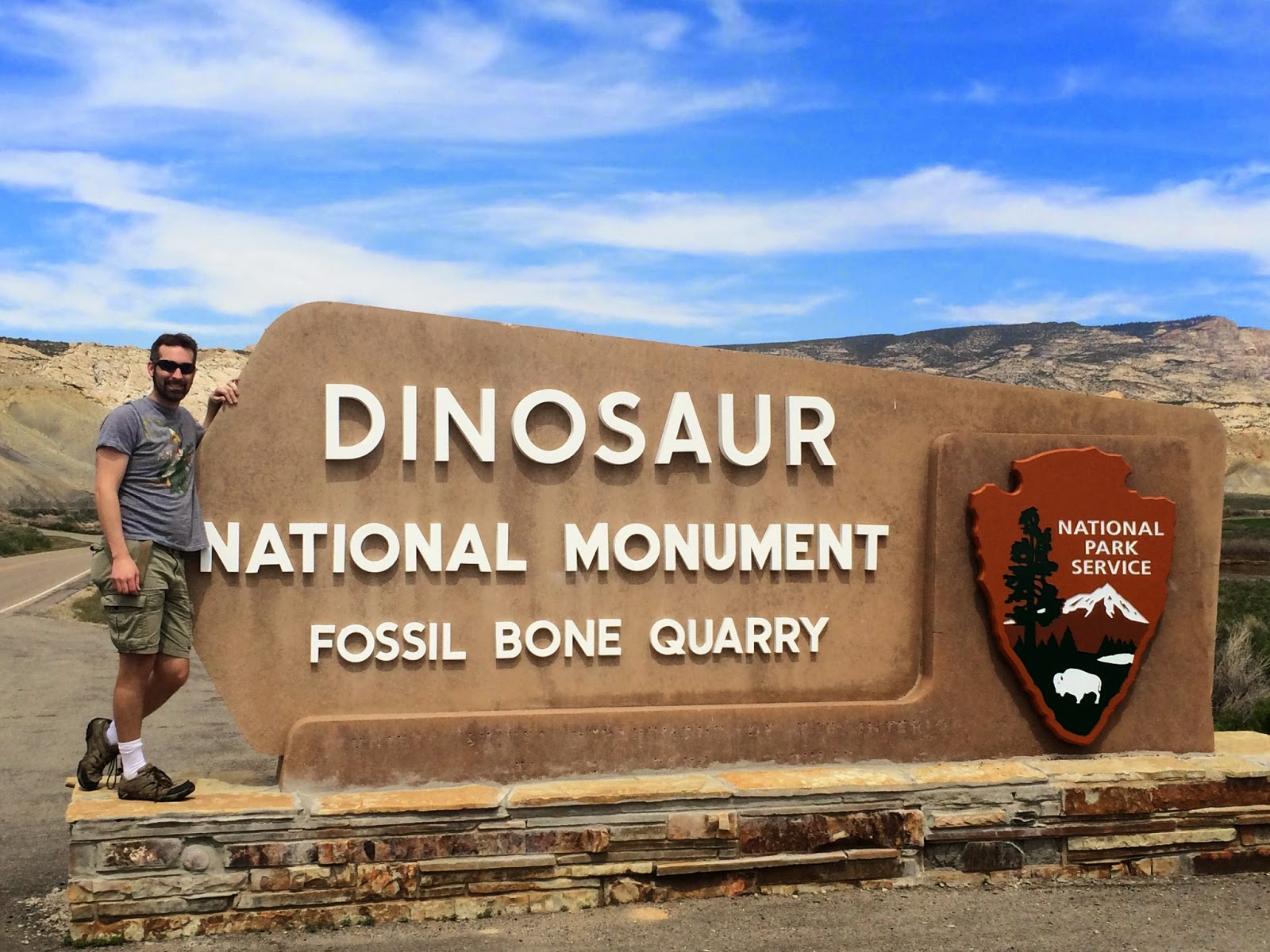 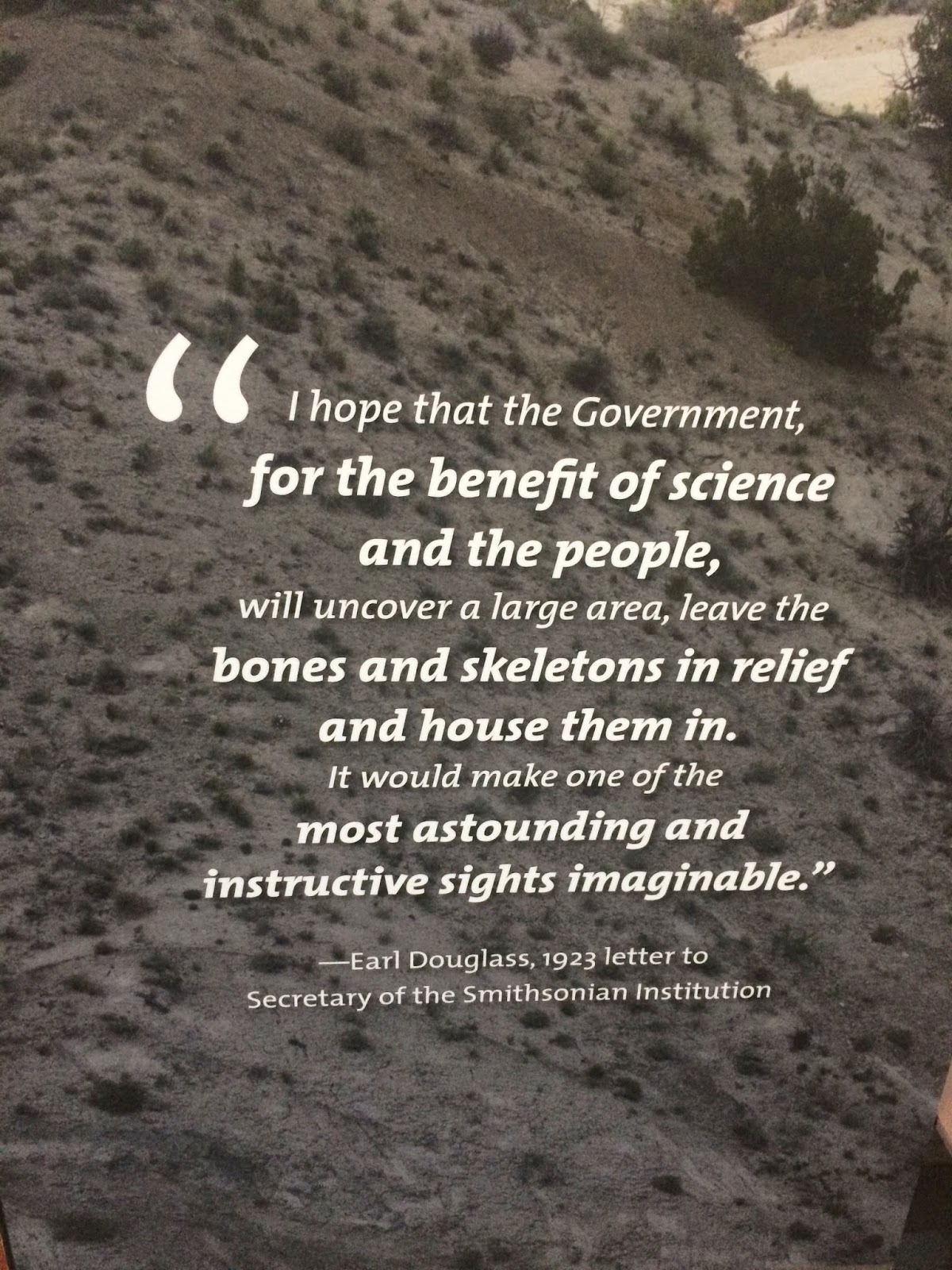 "I hope that the Government for the benefit of science and the people, will uncover a large area, leave the bones and skeletons in relief and house them in. It would make one of the most astounding and instructive sights imaginable." - Earl Douglas, 1923

Earl Douglas discovered the quarry in 1909.

And here is the main attraction. The fossil wall in panorama form. The Fossil Wall is part of the Carnegie Quarry that was the original quarry from which the park was built around.

The northern end of the fossil wall. The Fossil Wall is in the Morrison Formation, a rock unit that is the Late Jurassic in age, approximately - 155-148 million years old. The Morrison Formation represents a large variety of environments, with mostly terrestrial rivers and lakes containing the most fossils. It is thought by scientists that the dinosaurs of Dinosaur National Monument accumulated within a local river, where the animals went to get water, but a drought cause all the water to dry up and the animals died. This was then followed by a return of the water, burying the animals in sediment and preserving them for all time.

And the southern end. Although dinosaur fossils are found in many different rock units, it is the Morrison Formation where most of the dinosaurs discovered in Dinosaur NM have been found. 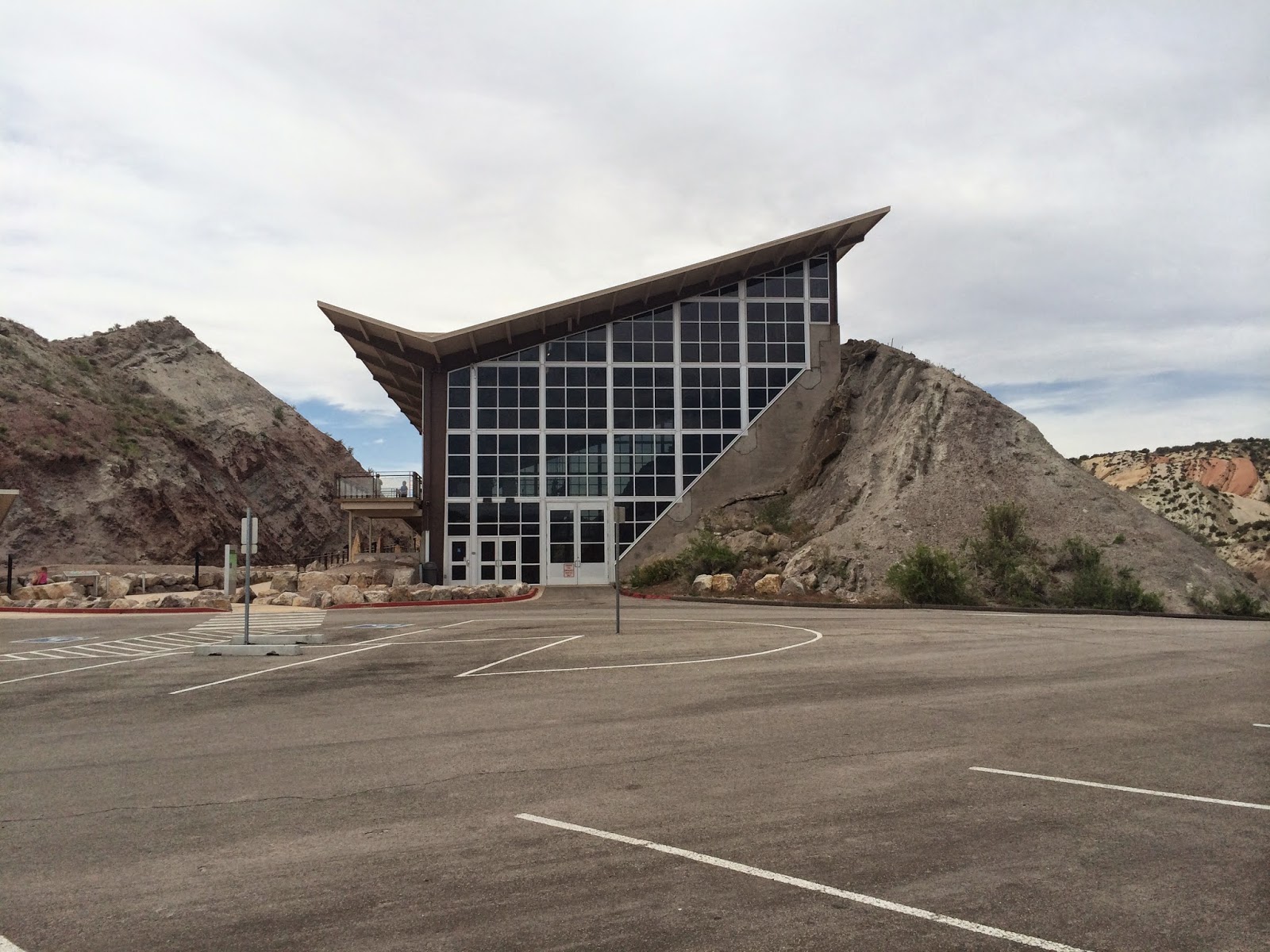 View of the outside of the main exhibit building. The building is newly rebuilt (since the other one basically fell off the wall) and rests right on top of the fossil layer. The next picture is a shot in the opposite direction from the building. 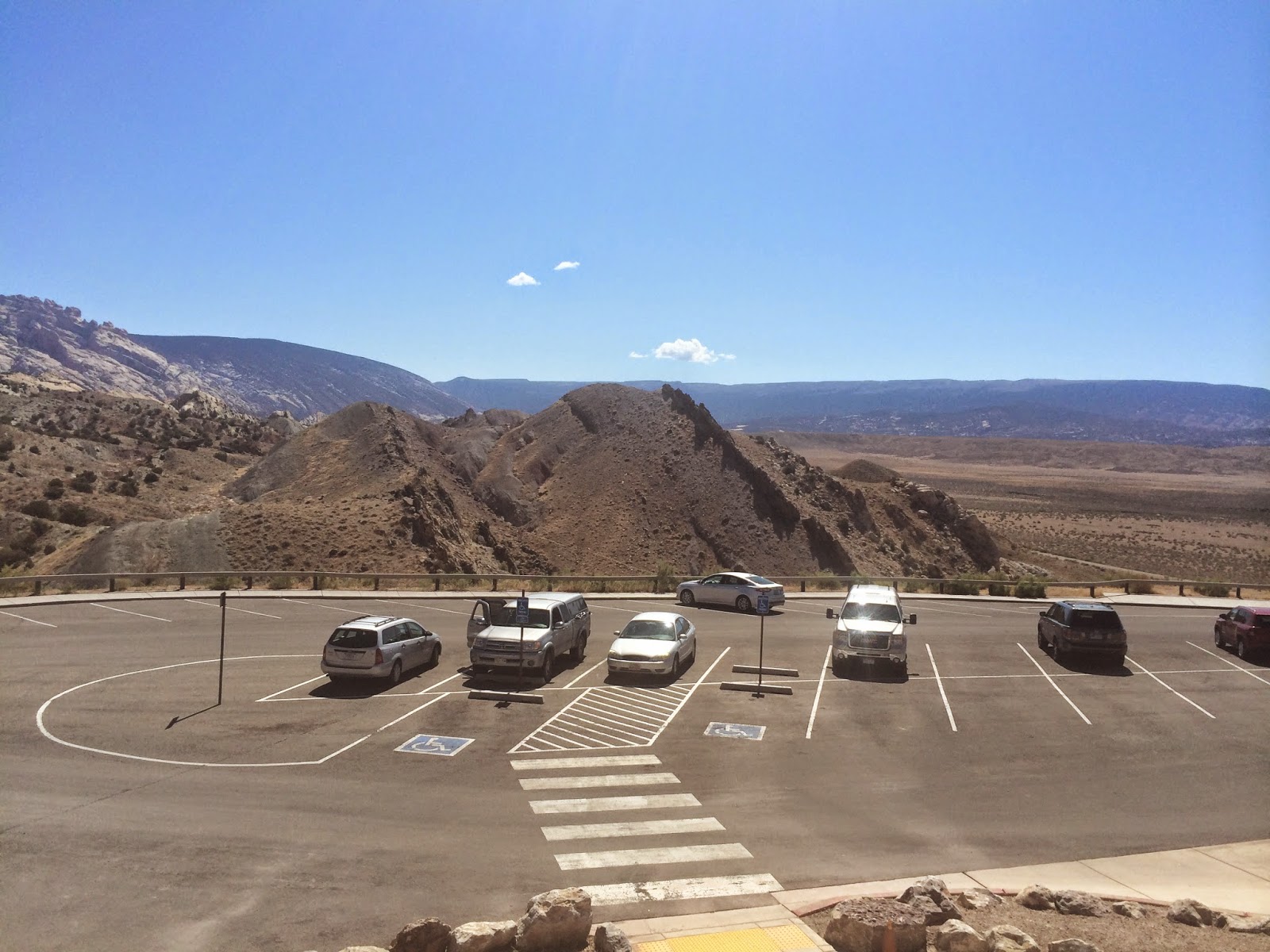 Picture from the fossil wall in the northern direction (away from the building) where you can track the Morrison Formation fossil layer across the parking lot. 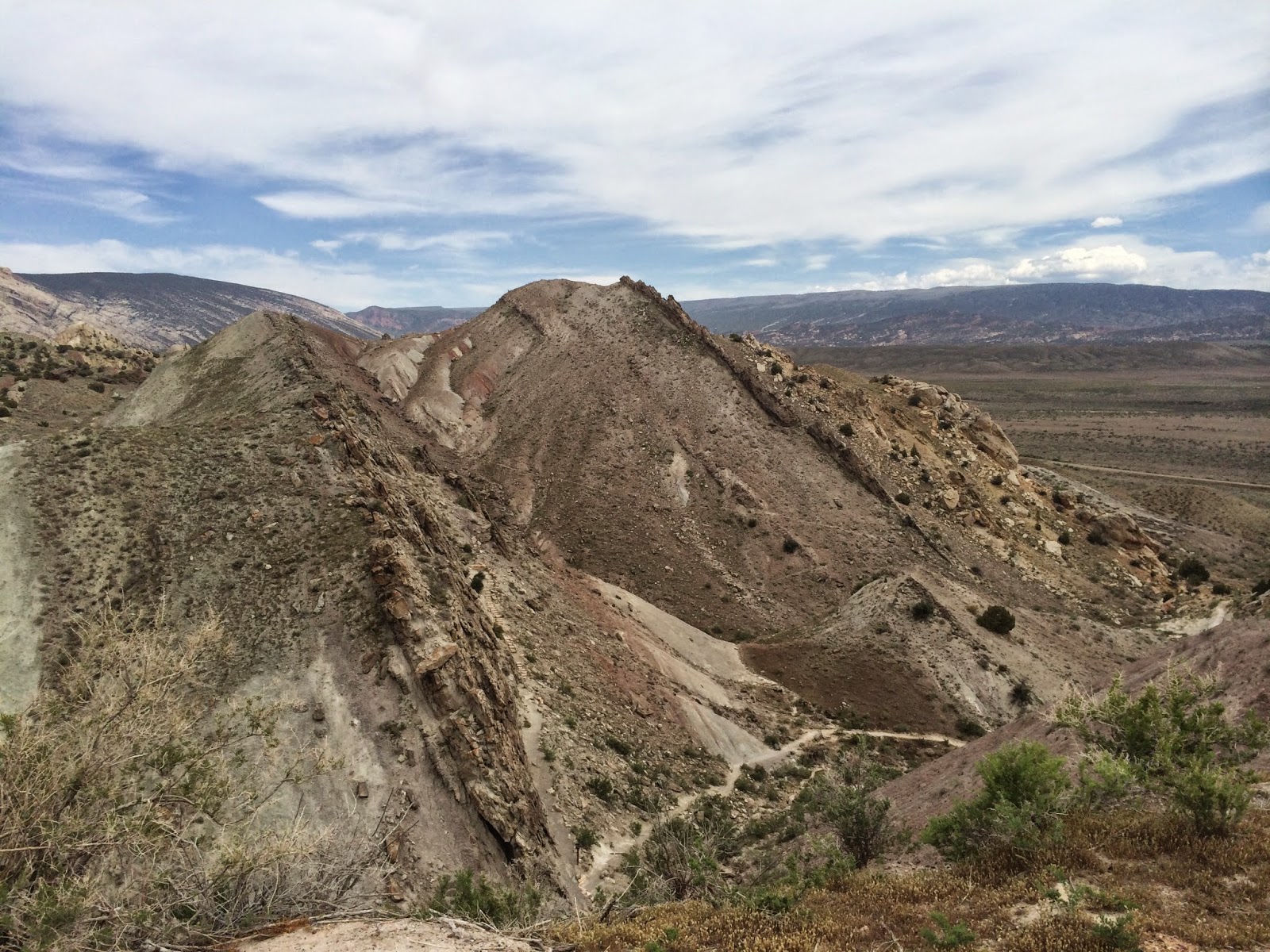 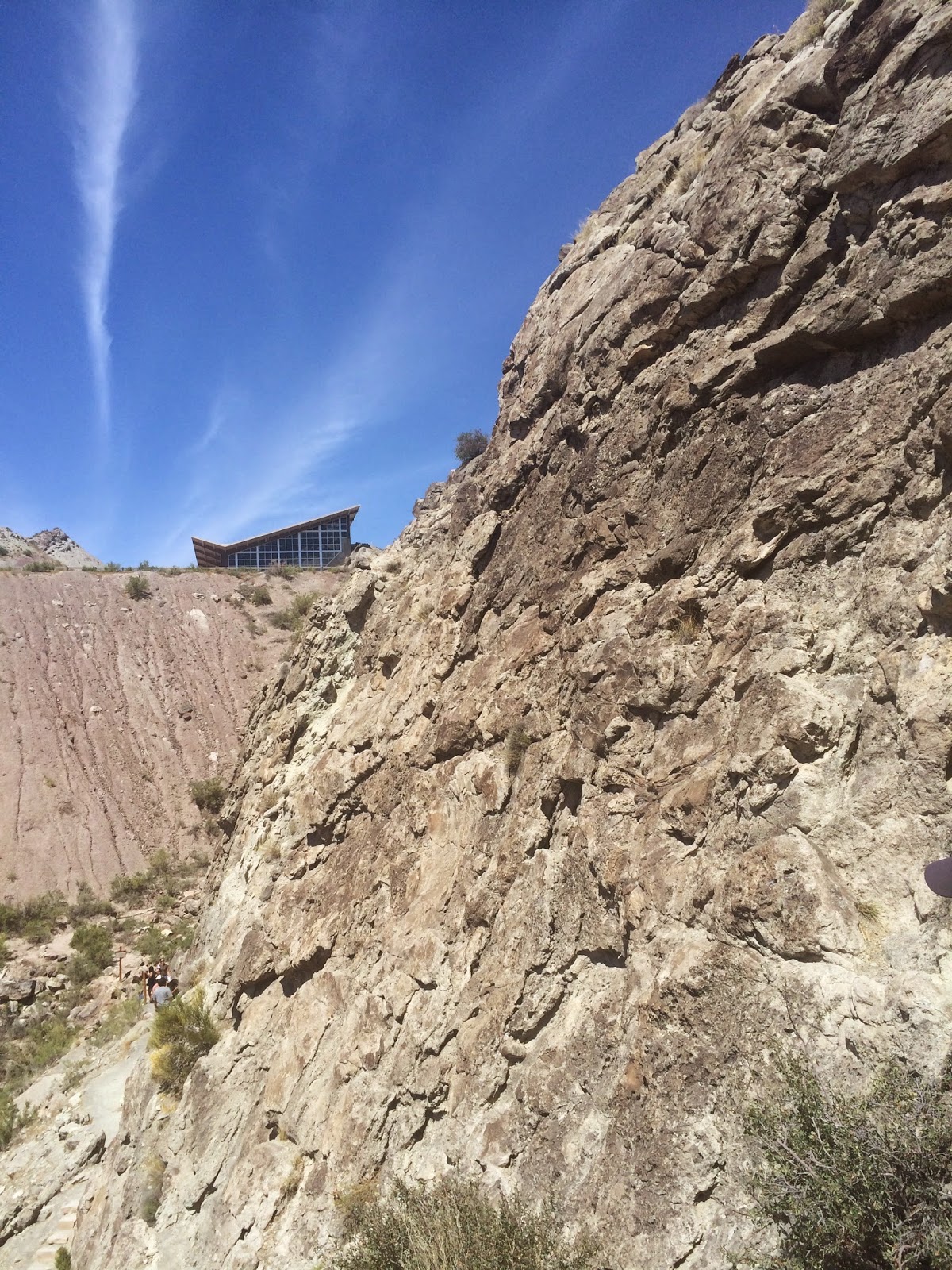 View of the fossil layer looking back up at the building. Most of the best fossils were all up within the building but most people found it exciting to discover fossils "out in the wild". 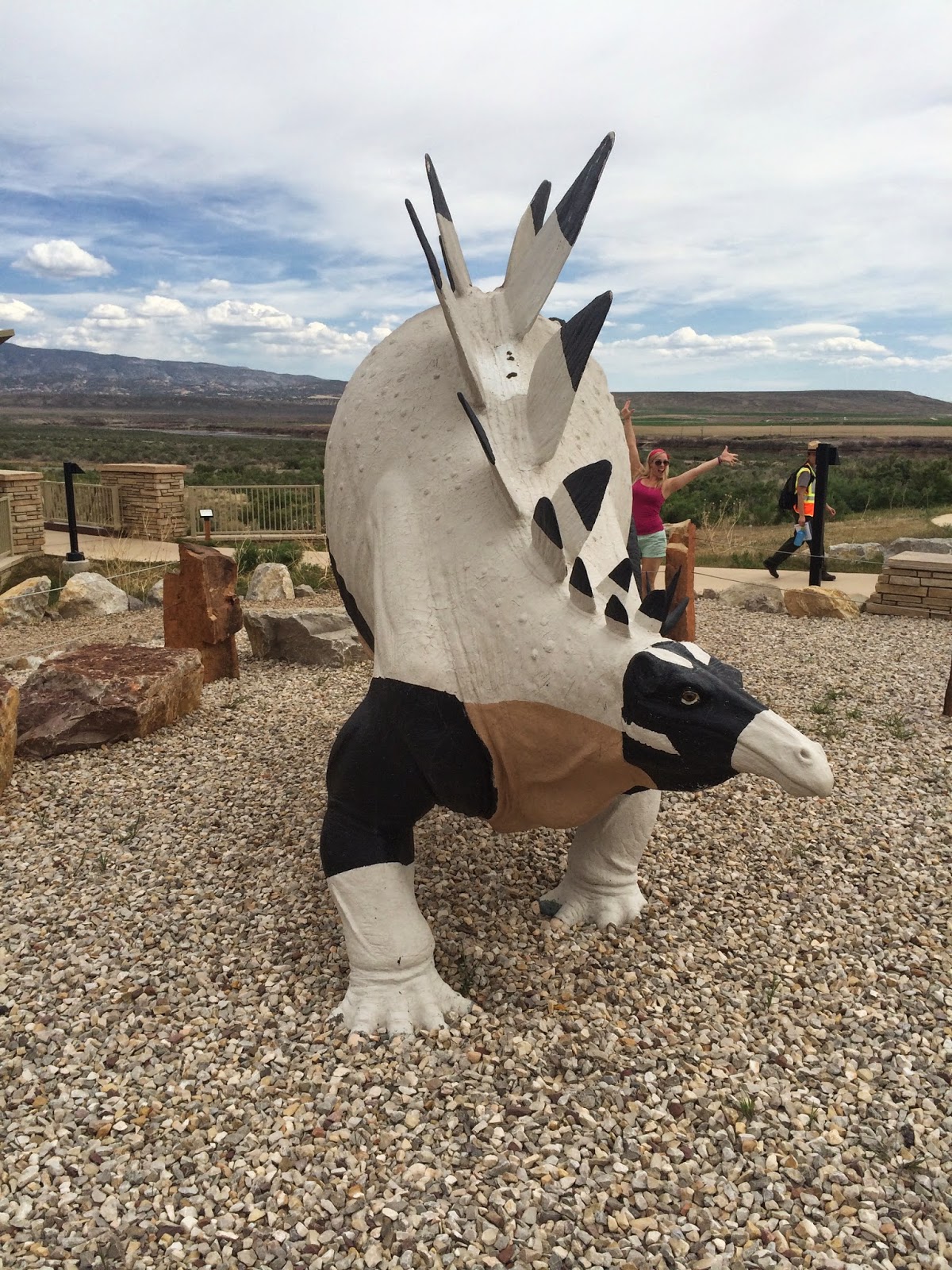 Departing dino shot. The Stegosaurus represented here is one of the many fossils that have been found within the park along with Camarasaurus, Diplodocus, Apatosaurus, and Allosaurus, among others.
at September 17, 2014 2 comments:

Geology Through Literature - The Way of All Flesh

The next story up in the Geology Though Literature thread is The Way of All Flesh by Samuel Butler.


"It must be remembered that the year 1858 was the last of a term during which the peace of the Church of England was singularly unbroken...I need hardly say that the calm was only on the surface. Older men, who knew more than undergraduates are likely to do, must have seen that the wave of skepticism which had already broken over Germany was setting towards our own shores (England) - nor was it long, indeed, before it reached them. Ernest had hardly been ordained before three works in quick succession arrested the attention even of those who paid least heed to theological controversy - I mean Essays and Reviews, Charles Darwin's Origin of Species, and Bishop Colenso's Criticisms on the Pentateuch."

As a little bit of a background, On the Origin of Species was originally published November 24th, 1859, while events during the first paragraph take place during 1858. Even though The Way of All Flesh was published in 1903, Butler began working on it in 1873. This shows that, the upheaval due to the publishing of several works like On the Origin of Species still would have been fresh in his mind. Although, the ideas of evolution were slowly gaining hold, even before Darwin's publication, the Church of England firmly held the beliefs as posed in the Bible. Mainly, that species were created by their Creator and have remained unchanged since creation. Darwin's (among others) theories flew in the face of that, hence the paragraph describing the breakdown of the Church of England's hold. Very fitting for a book that seems to be very anti-established church.


I like this passage because it shows how "descent with modification" (i.e. evolution) works in the context of society. My personal point of view is that many people take the term "evolution" out of context, where it simply means "change over time". Also, Darwin never stated the term "evolution" within the Origin of Species. He just used "descent with modification", so I feel that the author's phrasing in the last sentence as a hat-tip to the original term.
at September 16, 2014 2 comments:

Email ThisBlogThis!Share to TwitterShare to FacebookShare to Pinterest
Labels: Darwin, Geology Through Literature, origin of species

Unlike last years Salt Lake Comic Con, there was not much in the way of dinosaurs (or geology really) that I could find. I did see one person dressed up as a female Dr. Grant from Jurassic Park but I never was able to get a picture of her. So, in lieu of that, we have Smaug from The Lord of The Rings. Dragons are based on dinosaurs, so essentially dragons are the descendants of dinosaurs, like birds.

Therefore, dragons can be considered the cousins of birds. And in that case, here you have a dinosaur descendant.

Side Note: I didn't realize this at first but one of the eyes opened and closed. You can see that through the 3 pictures below. Very nice! 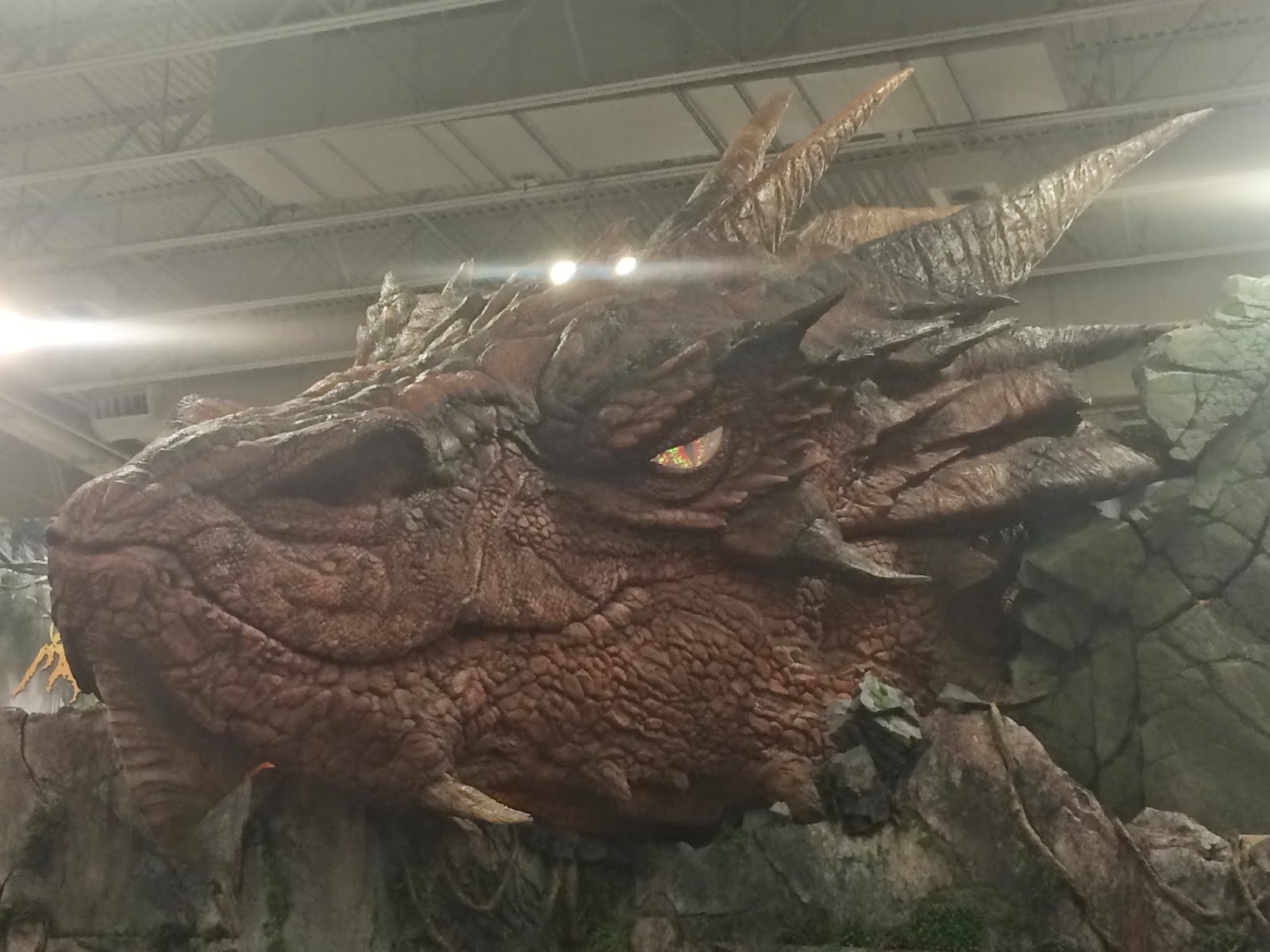 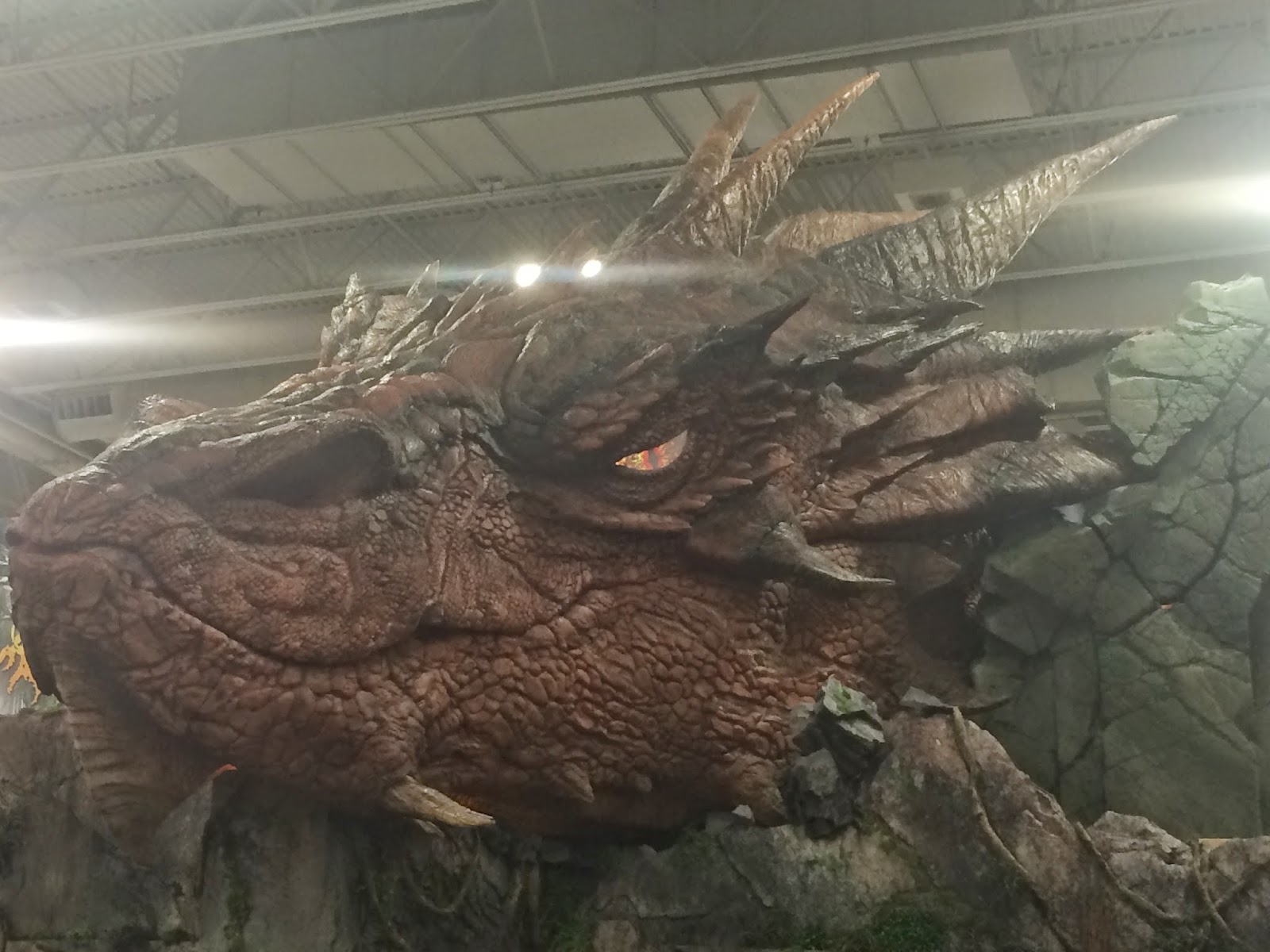 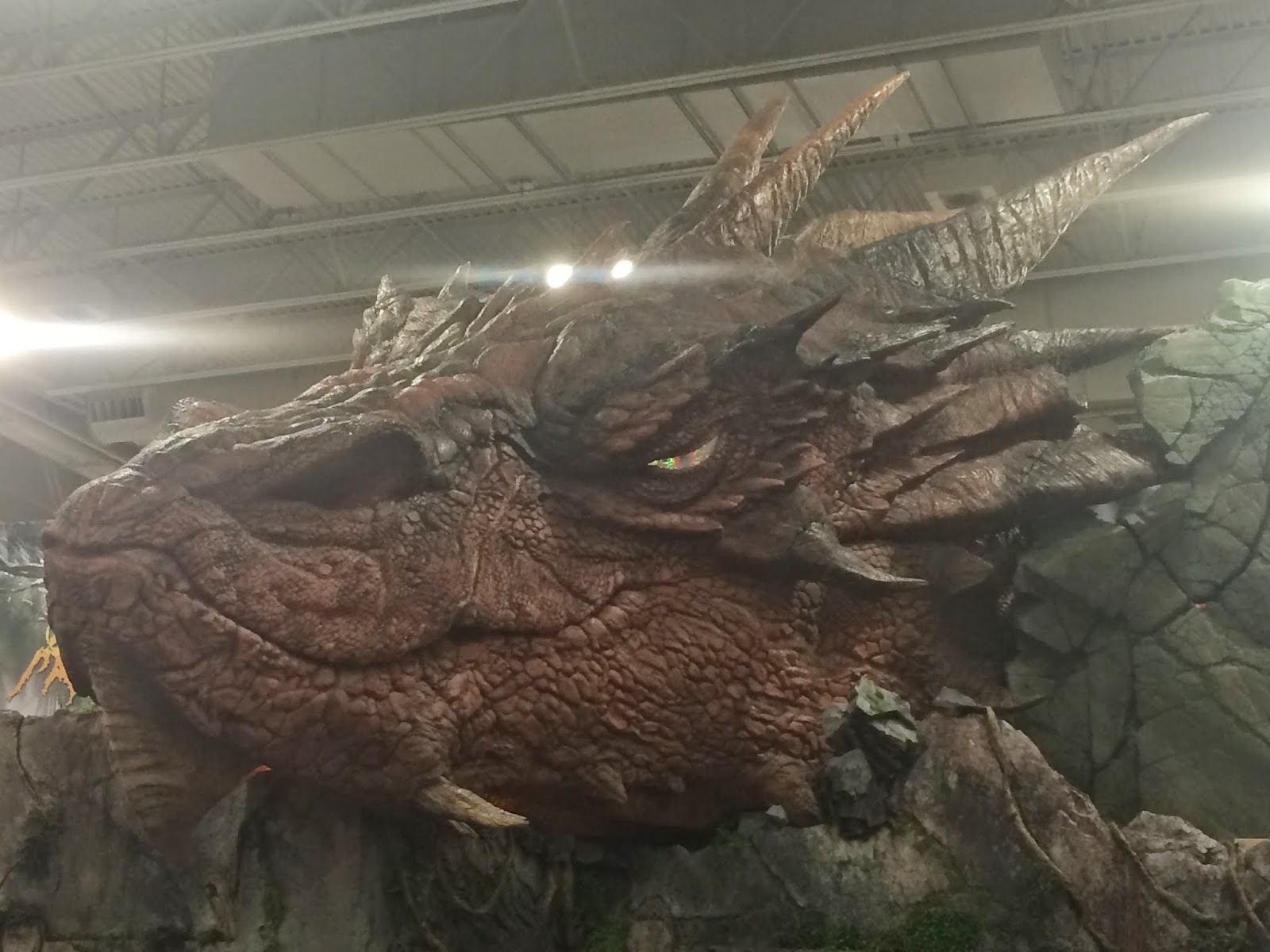