I have been wanting to write a post lately describing the search for the primary information in the literature. What I mean by this, is searching for where an idea originated. Frequently people will just cite the source where they read the information, not caring if that idea was cited from some previous source. The problem though lies in the fact that that information came from somewhere else, and your citation does not adequately represent the source of the information. But there is another problem. Perhaps they changed the purpose of that information a little, and the people they are citing changed it a little, and so on back to the source. It is like a game a telephone, where the original source of the information has very little in common with the final source.

Take for instance my search for the "Grey-weighted distance transform" which I used in my paper: Lehane and Ekdale, 2014, Analytical tools for quantifying the morphology of invertebrate trace fossils. The grey-weighted distance transform is a technique that I used in order to help determine Network Tortuosity of a trace fossil by calculating the tortuosity for each path through the trace.


When I was looking for a technique to do this, I stumbled upon Wu et al.'s (2006) paper on doing this type of network tortuosity measurements on fracture patterns. In the paper they state:


"The path length was determined using the ‘gray-weighted distance transform’ (Verbeek and Verwer, 1990). This algorithm calculates the path that results in the shortest traveling time when going from a set of predefined starting points to any other point in the image."

So clearly this appears to be a computer program set to calculate the length of the shortest paths across a surface. So I went to the article they cited, Verbeek and Verwer (1990). In that paper they state:


"Already in 1968 Rutovitz (1968) introduced the grey-weighted distance transform in which the  distance of a point to a set of reference points (the sources) is calculated as the lowest path sum of grey values (i.e. the lowest of the sums over all possible paths from that point to the sources)."

A couple of things are noticeable here. 1. Wu et al. (2006), changed the spelling of the "grey" to "gray" to match the language designations of where they were publishing, even though it was an already established title to an algorithm . 2. Even though the original idea for the process came from Rutovitz (1968), there is no citing of his paper anywhere in the Wu et al. (2006) paper.

And that is where part of my issue lies. This is not a slight against Wu et al. (they were a tremendous help to me on my dissertation) mainly because this is not an isolated incident. Should researchers be expected to find the primary source of  information or is the information cited far along in the game of telephone more relevant than the original source? Or should all of the links in the chain be cited?

To continue in our search backwards we go to Rutovitz (1968) who states under his section "Grey-weighted distance transform":


"Let S be a subset of the integer coordinate plane. The result of the pure distance transform of the characteristic function of S is a function d defined on S such that at each point (i,j) ϵ S, d(i,j) is the minimal path distance from (i,j) to S. Suppose though that we have a function g defined on S, and that we think of the values of g as heights of a surface above the (i,j)-plane. We want to set up a modified distance function on S, such that points accessible from outside of S via low-lying paths have lower values than points accessible only by higher paths of the same length. Of course, optimal relative weightings for the values of the function g in relation to the lengths of paths in the raster must be found."

So, how much relevance does this have, from a time before computers to the modern application, where the computers used would have been even beyond comprehension at the time the original algorithm was conceived.  The basic theory is generally similar, but the use and changes that it has undergone through the decades has changed it. Is the original even relevant anymore?

Personally, I feel all such applications should be cited. From the original source, up through the modern example, because they all had a hand in crafting what it had became so that I was able to use it in my research.

Would you like a prehistoric snack?
Well now you can munch on some dinosaurs with Jurassic World fruit flavored snacks. 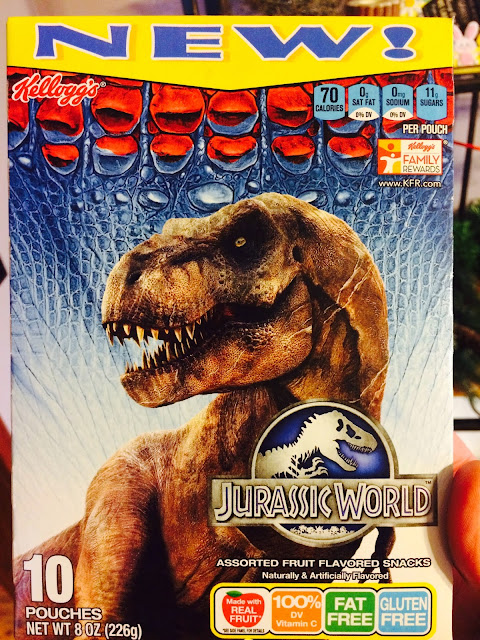 Truth be told, I am actually quite fond of fruit snacks and these taste like any others that you are going to find in the grocery aisle. 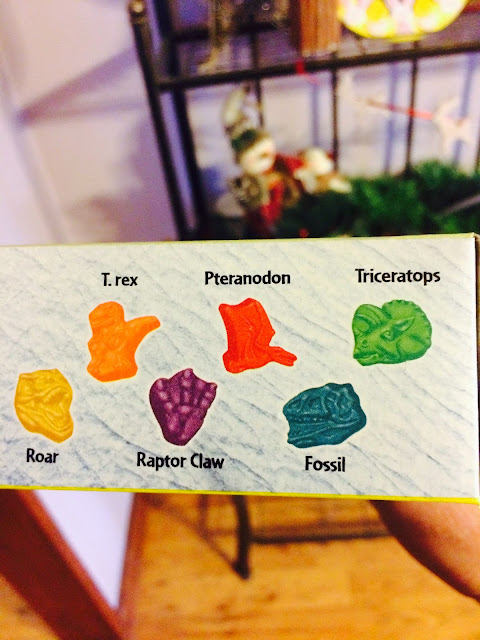 You can match the shapes up with what they had and the shapes were pretty cool. It was hard to get a picture showing the detail of the fruit snacks, but it's there if you look. The yellow one was the hardest to notice any detail on, even in person. 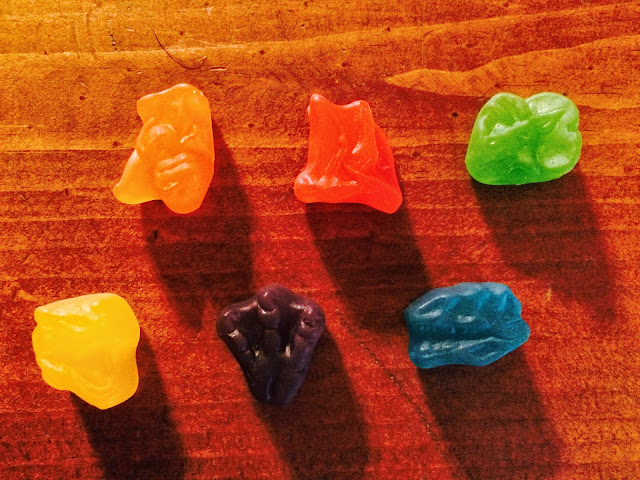