Geology of the National Parks Through Pictures - Death Valley

My next post about the Geology of the National Parks Through Pictures is...

Finishing our tour of the southwest's desert national parks was Death Valley. The hottest, driest, and lowest National Park. Also the lowest point in the Western Hemisphere. We entered the park at the southern entrance, which enabled us to hit up Badwater Basin on our way into the park, since that was the main thing I wanted to see. Unfortunately, we were getting there right at sunset so the sun is in a lot of the photos, since we were on the eastern side of the valley. 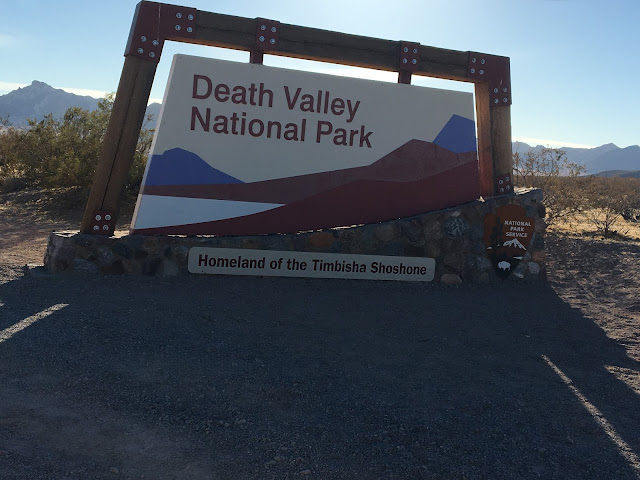 Our first view of valley known as Death Valley on our way towards Badwater Basin. The valley was formed during the expansion of the western United States creating the region known as the Basin and Range province. Initially the United States was being squeezed by a large plate off the west coast known as the Farallon Plate. This plate was slide beneath North America while also pushing up against North America. Eventually most of that plate complete subducted (went beneath) North America. At that point the pressure was off and North America began expanding outwards like a squeezed sponge. This outward expansion produced a series of linear mountains alternating with linear valleys, the Basin and Range. This region extends from mid-Utah, through Nevada, and into eastern California.

Distant view of Badwater Basin towards the north. 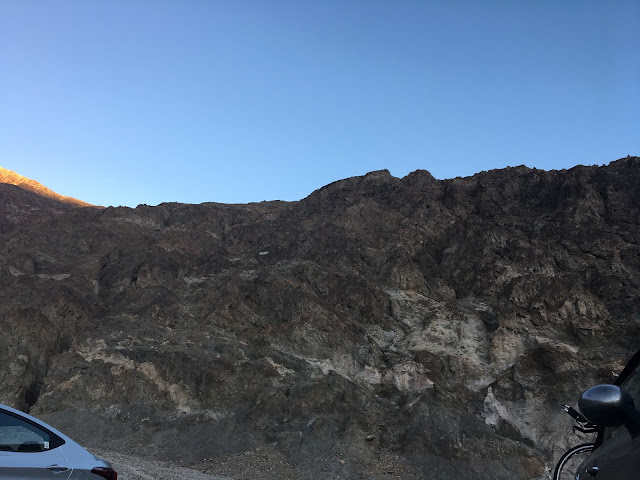 Here is a shot while standing in Badwater Basin, the lowest point in the Western Hemisphere (282 feet below sea level). This view is looking towards the east, up at the valley wall. If you look closely there is a little white box towards the center of the photo. The box says "Sea Level". 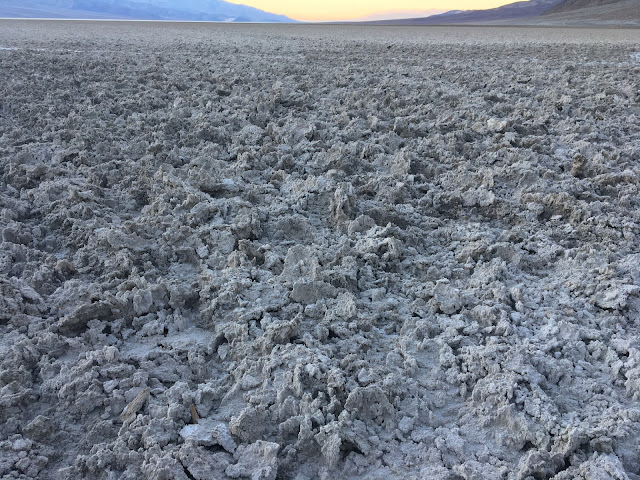 The salt that has accumulated at the bottom of Badwater Basin. Badwater Basin is a terminal basin, meaning that all of the water that flows into this basin, stays here, until it evaporates away. This means that all of the minerals from the surrounding landscape also get deposited here and stay here. This causes many end basins to have very, very high concentrations of minerals like halite (salt) and gypsum. A similar terminal basin is the Great Salt Lake, also with a very high salt content.

Looking out towards the basin along the salt walkway that the tourists are allowed on. You will notice all the holes. I'm positive these are people digging them, then going "Now I'm at the lowest point!". Please don't do do this. Those people are just jackasses and breaking the law.

Another view of Badwater Basin. 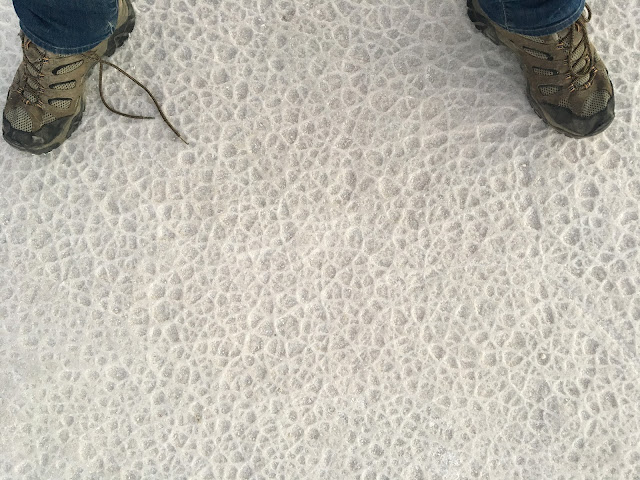 Close up shot of the salt flats. Love the designs in the salt. 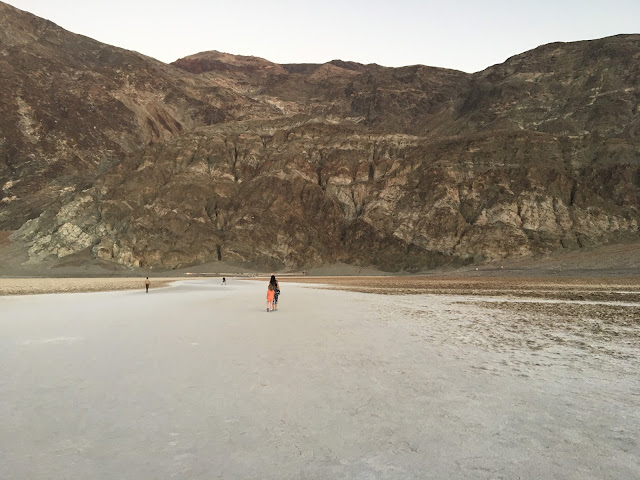 Looking back towards the "Sea Level" sign and the valley wall. 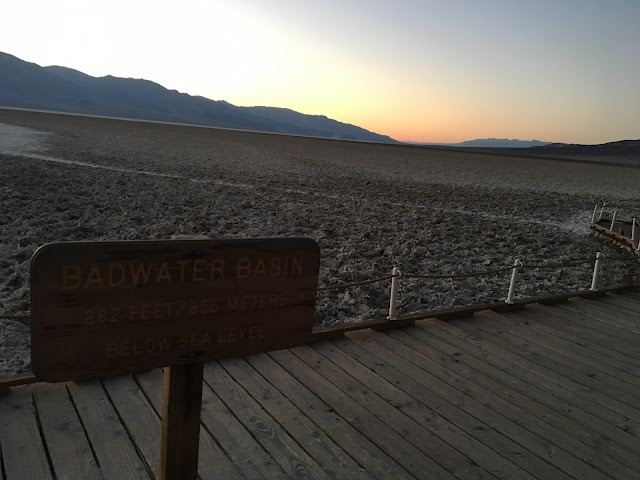 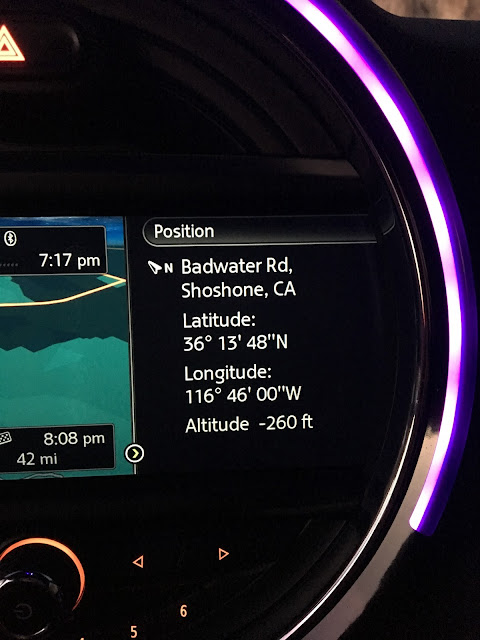 The car's altimeter was a little off, but it was still cool to see it say -260 ft. 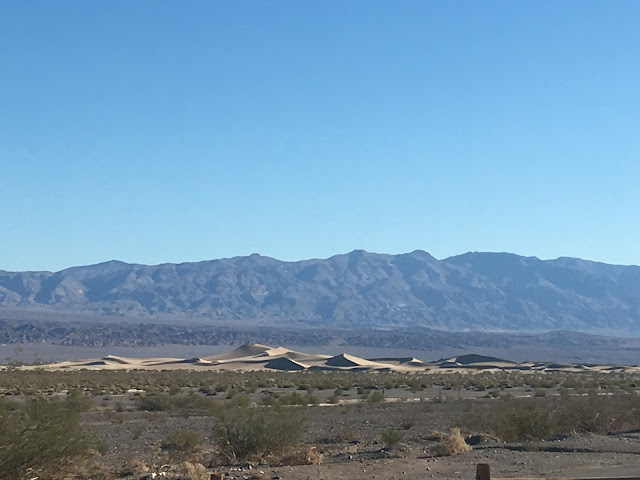 View from our room at the Stovepipe Wells Village looking at the Mesquite Flat Sand Dunes.

Got out and hiked around the dunes a little. 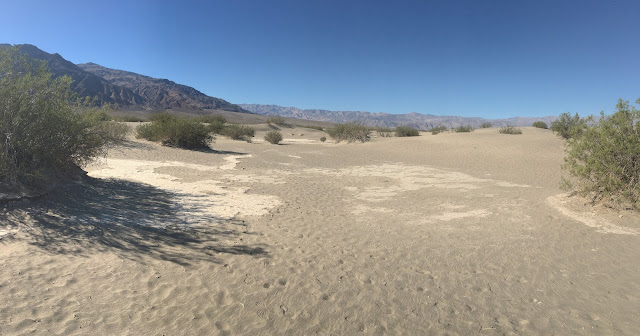 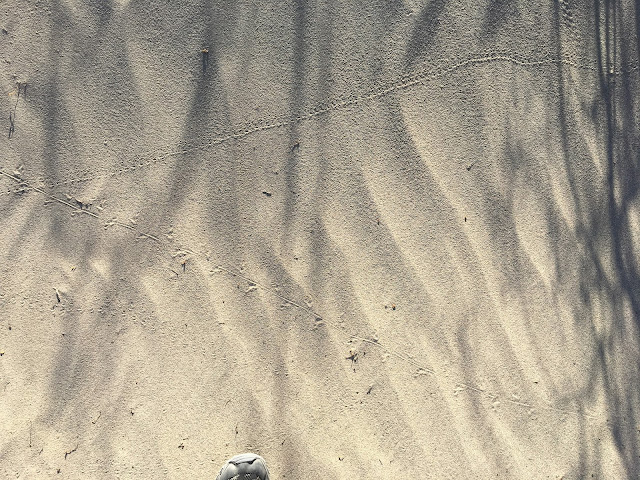 Traces of dune life. Looks like lizards and mice to me. 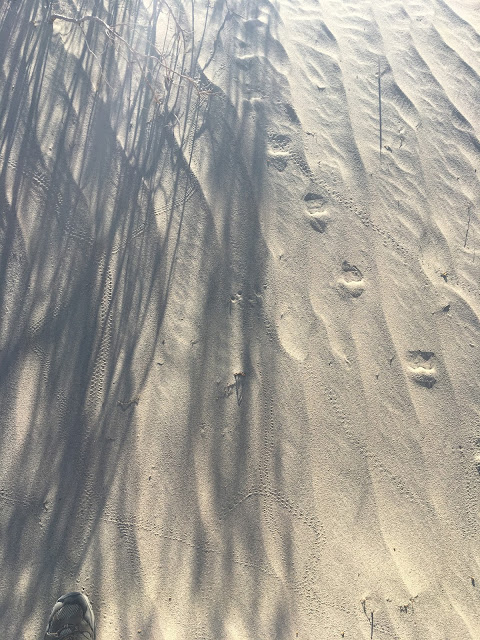 More tracks. Maybe a hare mixed in and I'm sure there were scorpion tracks in there somewhere. 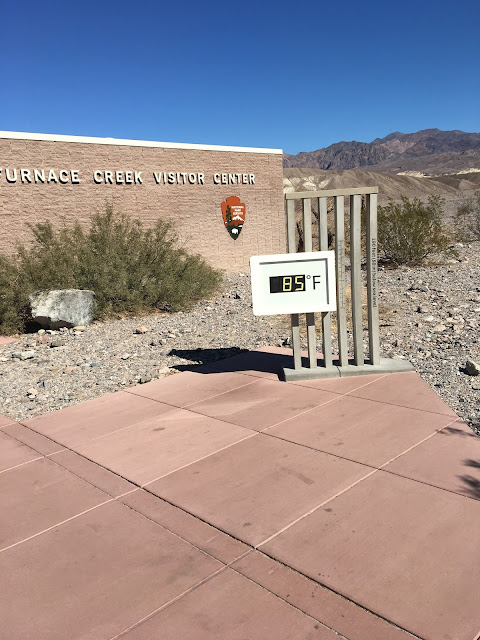 Furnace Creek visitor's center, which is the location for the hottest place on Earth. It was only 85 while we were there, so not too bad. The reason that Death Valley holds the record for being the hottest places on Earth, and is also one of the lowest places on Earth are not separate isolated instances. The valley floor is so low, and the surrounding mountains so high, that the air currents within the valley can't escape during the hot summer months. So as the sun heats up the valley it isn't able to cool down at night very much because the air is trapped in the valley. Come the daytime that slightly cooled air descends back down to the surface and heats up even more. It's a cyclical cycle that produces incredibly hot temperatures.

Went over to Artist's Drive. View of the valley wall. The expansion of the crust also thinned the crust. This thinning allowed magma to start leaking through and producing volcanoes in various places along the expansion region. These volcanoes eventually moved towards the east but not before producing volcanic eruptions including ash and lava. The rocks in this area specifically are heavily composed of that ash, which is rich in heavy minerals and elements like nickel and cobalt. When these heavy metal elements start to erode, they produce vibrant colors not typically seen in a normal sedimentary landscape.

Another view of the valley wall along Artist's Drive.

Looking out towards Death Valley from Artist's Drive.

Artist's Palette. This was an extremely colorful  ash and claystone deposit, made colorful by the various metals in the ash. The colors got a little washed out in the photo but they were rather striking in person.
at November 28, 2016