DINOSAURS: From Cultural to Pop Culture - 1300's and 1400's AD: Dragons in the late Medieval Ages

Continuing from last time, we are looking at dragons and how they evolved through the Middle Ages. I was recently having a conversation about dragons and I was asked if it could honestly be said that dragons evolved through local discoveries of dinosaur bones. And while, it can not be absolutely proven that dragons stem from dinosaurs (it's likely not even possible that scientists could prove one way or the other that they are linked), I think it is a safe assumption that there is some historical linkage between the two.

As mentioned before a good website to find information on Medieval beasts is The Medieval Bestiary though.  Another good source is the British Library, which has some crossover between the sources and is a good check on the sources. Images below can be found at this link: http://bestiary.ca/beasts/beastgallery262.htm# 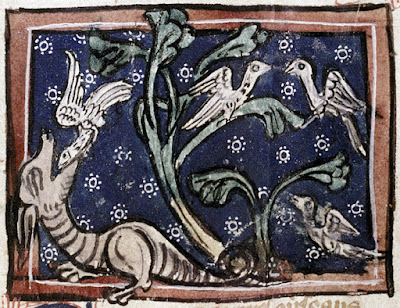 Dragon's in the 1300's continued along the very familiar lines of the 1200's. Here is depicted a dragon at the base of the Peridexion tree, with the same physical attributes as before. These include the large hind legs, big ears, and wings, although this particular example appears to not have any wings present. This image can be found in the Bodleian Library, MS. Bodley 912. 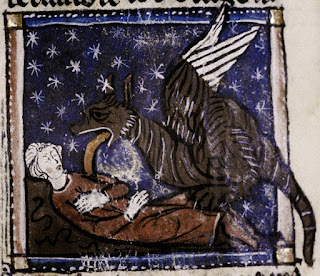 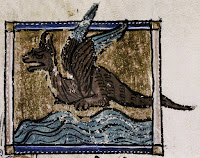 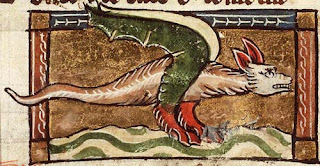 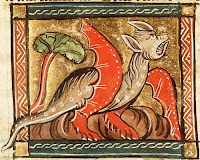 More images of dragons from the 1300's. These are interesting in that they appear to have feathers or fur of some variety. In the 1200's some of the dragons appeared to have some feathers on their wings but not to the degree that these show. Top row left image is of a dragon supposedly licking somebody, although to me it looks like it is vomiting. Both top row images with the feathery wings can found in Bodleian Library, MS. Douce 308.  Both bottom row images with the bat-like wings can be found in the Koninklijke Bibliotheek, KB, KA 16. 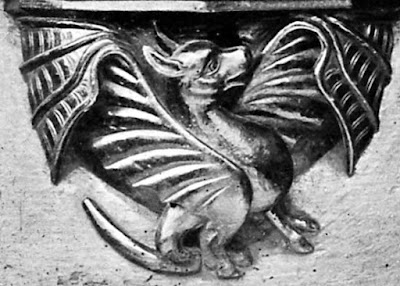 The above image is of a wood carving of a bat with four legs, which is rare but not unheard of from the 1200's. This bat also shows leathery bat wings instead of the bird like wings of the drawings. This carving is from the Cartmel Priory, from Cartmel, England and the image can be found in  Wood Carvings in English Churches: Misericords by Francis Bond (1910).

There is a continued stagnation of dragon development through the end of the Middle Ages, although the drawings do seem to get more detailed. 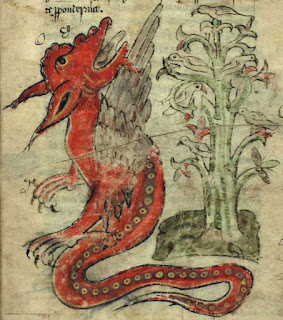 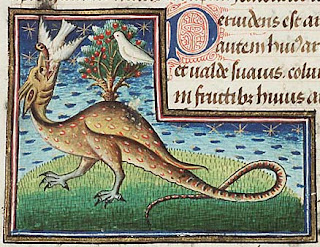 More dragons at the base of the Peridexion tree. The interesting item of note here, is that the dragon on the left appears to have something running down the midline of its back and tail. Hard to tell what they are supposed to represent although they do look like octopus suckers. Perhaps they supposed to be spikes? This isn't a one off occurrence either as can be seen in a dragon illustrated below with the same circle pattern. The image on the left is from the Kongelige Bibliotek, Gl. kgl. S. 1633 4º (Bestiarius - Bestiary of Ann Walsh). The image on the right is from the Museum Meermanno, MMW, 10 B 25. 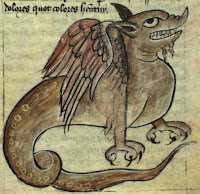 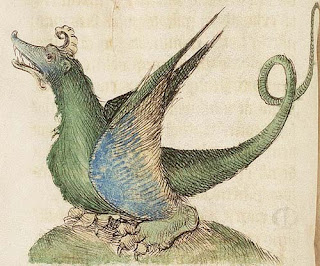 More of the same types of dragons as before. These often in more detail though. The top row dragon on the left does have that circular pattern running down its tail though. Perhaps it is no coincidence that both images are from the same book, the Kongelige Bibliotek, Gl. kgl. S. 1633 4º (Bestiarius - Bestiary of Ann Walsh). The well feather specimen on the top row, right is from the Koninklijke Bibliotheek, KB, 72 A 23 (Liber Floridus). The leathery bottom row dragon with the bat-like wings is from the Museum Meermanno, MMW, 10 B 25.

These carvings (also illustrated in the Wood Carvings in English Churches: Misericords by Francis Bond (1910) like the image above) can be found in the Carlisle Cathedral, Carlisle, England. As seen above, these dragons are pictured with more a bat wing appearance, however the other attributes remain the same.

I occasionally do a set of blogs called "What are...". Here is the next one in the series.

I was reading a book with my daughter, book 8 of the Magic Tree House series - Midnight on the Moon (her current favorite series of books to read) and I came across this passage that seemed off to me: 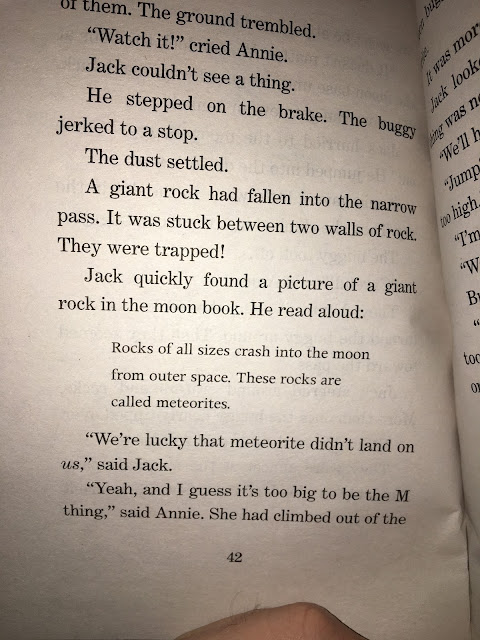 The main part I was stuck on was:


"Rocks of all sizes crash into the moon from outer space. These rocks are called meteorites."

So what would be an object that crashed into the moon?  Turns out that NASA scientists just refer to them as meteoroids, as can be seen in this story - A Meteoroid Hits the Moon.

So what are the differences between a meteor, meteorite, meteoroid, asteroid, and comet?

Meteoroid - These are chunks of rock that are floating in space that are smaller than a kilometer in diameter (Hubblesite.org).

Meteor - This is just the flash of light, a shooting star, that you see in the night sky as a meteoroid falls through the atmosphere and starts to burn up. This is not the physical object that is falling (Hubblesite.org).

Meteorite - A meteorite is a meteoroid that has survived entry through the Earth's atmosphere and has crash landed on the surface of the Earth (Hubblesite.org). This term seems to be exclusive to rocks found on Earth, since terms like "Martian meteorite" or "lunar meteorite" are for meteorites found on Earth that originated from Mars or the moon respectively.

Comet - A comet is a body of ice, rock, and organic compounds that can be up to several miles in diameter. "Comets are thought to originate from a region beyond the orbits of the outermost planets. Scientists believe that gravitational perturbations periodically jar comets out of this population, setting these "dirty snowballs" on orbital courses that bring them closer to the Sun. Some, called long-period comets, are in elliptical orbits of the Sun that take them far out beyond the planets and back. Others, called short-period comets, travel in shorter orbits nearer the Sun" (Nasa.gov).

Asteroid - "Most asteroids are made of rock, but some are composed of metal, mostly nickel and iron. They range in size from small boulders to objects that are hundreds of miles in diameter. A small portion of the asteroid population may be burned-out comets whose ices have evaporated away and been blown off into space. Almost all asteroids are part of the Main Asteroid Belt, with orbits in the vast region of space between Mars and Jupiter. In space, a large rocky body in orbit about the Sun is referred to as an asteroid or minor planet whereas much smaller particles in orbit about the Sun are referred to as meteoroids" (Nasa.gov).

Email ThisBlogThis!Share to TwitterShare to FacebookShare to Pinterest
Labels: meteorite, What are ...

DINOSAURS: From Cultural to Pop Culture - 1100's and 1200's AD: Dragons in the early Medieval Ages


Even though much writing and other information has been lost from the Medieval Ages, there is still some sources available about what people thought about dragons during that time. During this period it is unclear though if the myth of dragons had stemmed from the discovery of more dinosaurs, or had slowly been evolving on its own, building upon itself as time went by.

A good website to find information on Medieval beasts is The Medieval Bestiary though.  Another good source is the British Library, which has some crossover between the sources and is a good check on the sources. Images below can be found at this link: http://bestiary.ca/beasts/beastgallery262.htm#

I cannot find many examples of dragons in the 1100's or earlier. But the dragons during this time period are depicted in the one work I found to be rather small. They kind of have a dog appearance, however they only have hindlimbs (no front limbs) and large wings (compared to their body size). 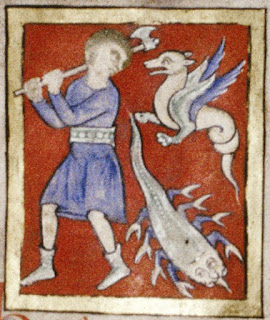 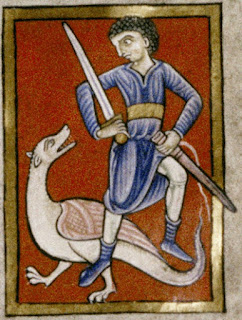 The images above were found in the Bodleian Library, MS. Ashmole 1462(De medicina ex animalibus).

As time continued into the 1200's, a feature of dragons that was common during this time was their morphological characteristics. More often than not, they were portrayed with large wings, large rear legs, no front limbs at all, and large ears. Their general body shape was elongate/worm like with enlarged torsos. The one thing that has evolved in them since the 1100's is that they are now depicted much larger, often depicted in association with elephants to emphasize this. Their ears and hind legs have also grown in proportion to the body, as compared to the previous century. 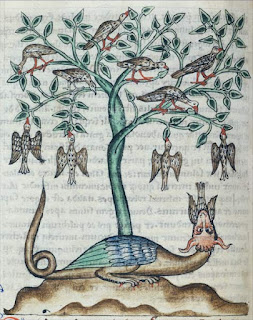 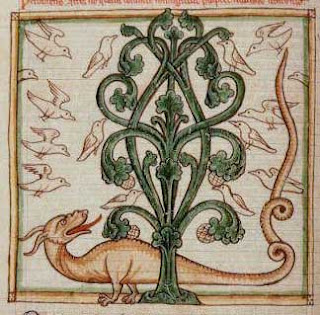 In some myths, the dragon took on the embodiment of Satan, where in this instance the doves are Christians trying to be protected from being devoured. The tree is referred to as a Peridexion tree and can be seen a few times in the literature. The image on the left can be found in the Bibliothèque Municipale de Douai, MS 711 (De Natura animalium) and the one on the right from the British Library, Harley MS 3244. 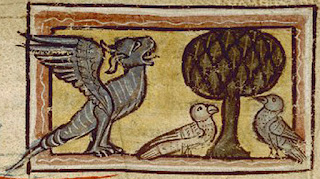 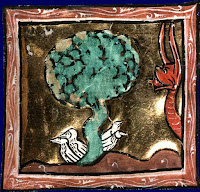 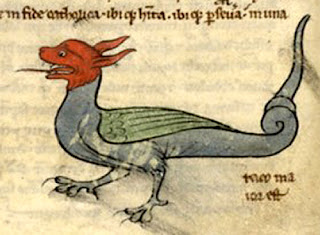 Another version of the dragon showing the "standard" Medieval morphological features. This image can be found in the Bibliothèque Nationale de France, lat. 6838B, 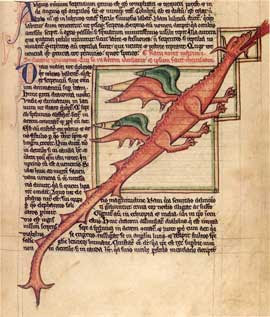 A different version of a dragon with two sets of wings and legs. I assume, based on the preponderance of only legged dragons during this time, that the front set it not meant to represent front limbs, rather another set of hind limbs. This image can be found in the British Library, Harley MS 3244. 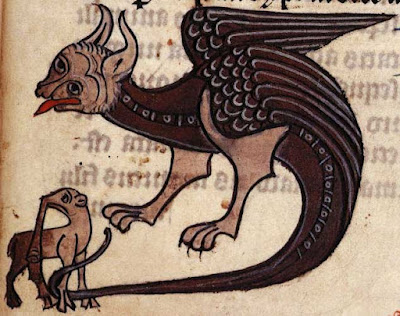 Another dragon, presented much the same as those above except this one is shown in comparison to an elephant to illustrate its size. This image can be found in the British Library, Sloane MS 278 (Aviarium / Dicta Chrysostomi) 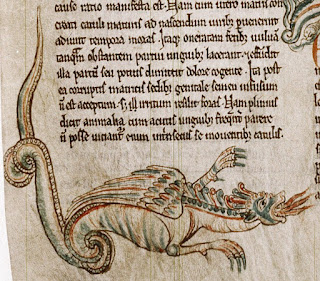 This image I found to be rather peculiar compared to the previous ones. The hind limbs have almost taken on a front limb characteristic, and the illustration seems to have much more detail and colors than the others. This image can be found in the Bodleian Library, MS. Douce 167.

Another random pic I had come across. Some modern dinosaur (bird) prints along Jones Beach on Long Island. These are likely seagull prints if I recall correctly. 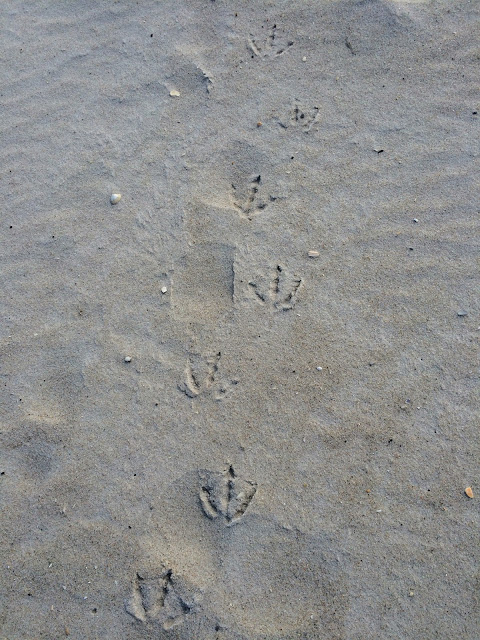 Going through some old photos, I came across these that I took as we were flying over the Great Salt Lake on my flight from Salt Lake City to Las Vegas. 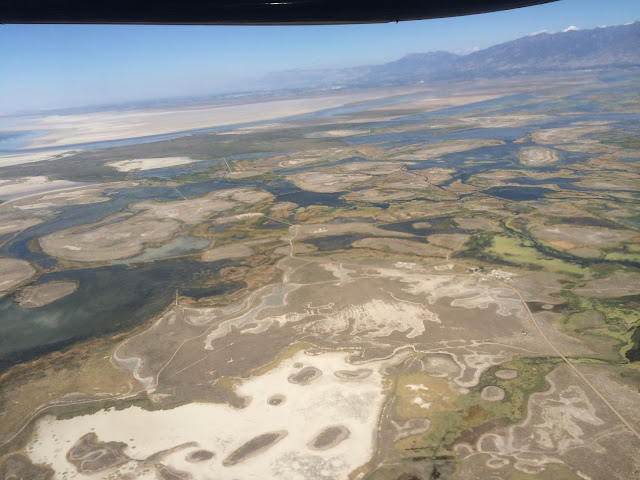 A view of the salt marshes to the east of the Great Salt Lake. 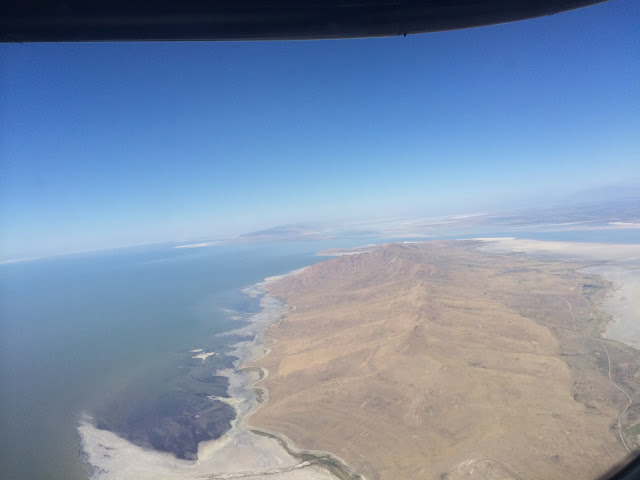 Antelope Island, which was formerly an island in the lake, however dropping water levels have exposed the land to the east of the island, no longer making this an island. 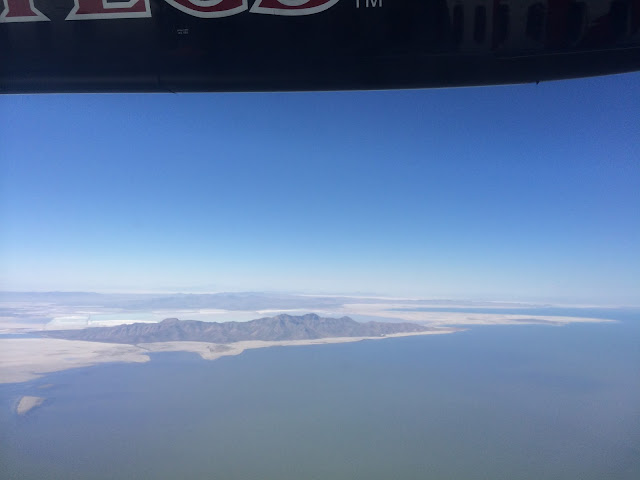 Another former island, Stansbury Island, which is further to the west. 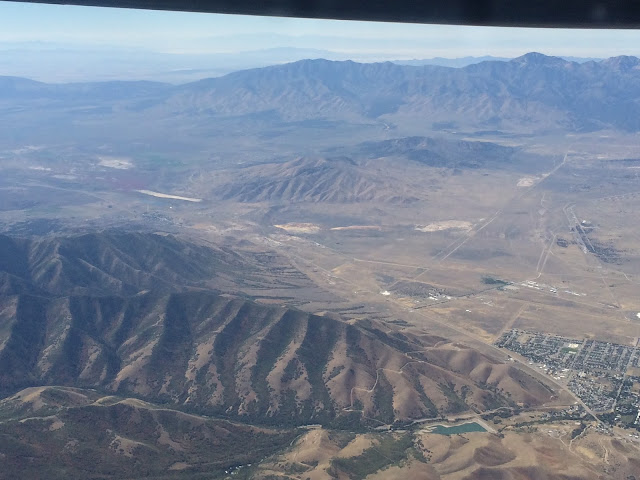 Not exactly of the Great Salt Lake, but in the middle of this photograph is what is called the "Stockton Bar". You can partially see it at the foot of the smaller mountain in the center of the picture. The Stockton Bar is a sandbar located in the Tooele Valley (the valley one over from the Salt Lake Valley) from the old Lake Bonneville. 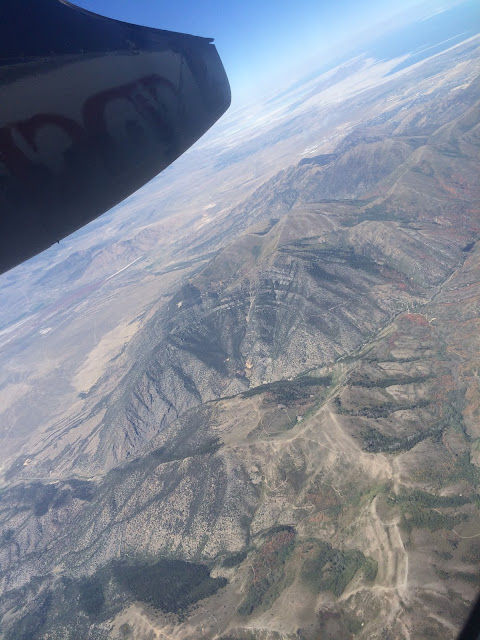 A view looking back at the Great Salt Lake from the south, where you can see some of the rock formations in the Oquirrh (pronounced o-ker) Mountains. This is the mountain range on the western edge of the Salt Lake Valley.