I was pointed out by my friend Erin a while ago about a blog talking about this website which sold a chocolate T. rex tooth and a chocolate "Megalodon" tooth. Since I wasn't able to do anything about it at the time, I saved the information. Well, I have come back around to it and lo and behold, there is so much more than I thought.

The website is called "The Edible Museum" and it is run by The Sarah Hardy Confectionary. And not only do they have those teeth. They have so much more. I went for the largest item they had, which included all of their available fossils (that I am aware of): The Chocolate Fossil Hamper Box. Which runs for £75.00, and is shipped out of England. Below I have a breakdown of what was included in the box. 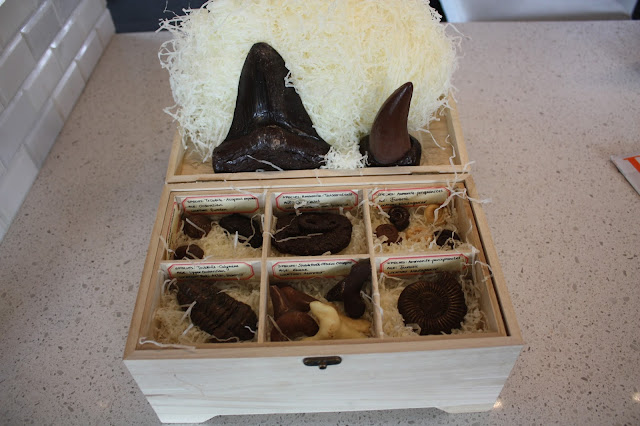 This is everything that came in the "case". It had about 18 individual "fossils" that ranged from white, milk, and dark chocolate to some with a combination of the milk and dark. 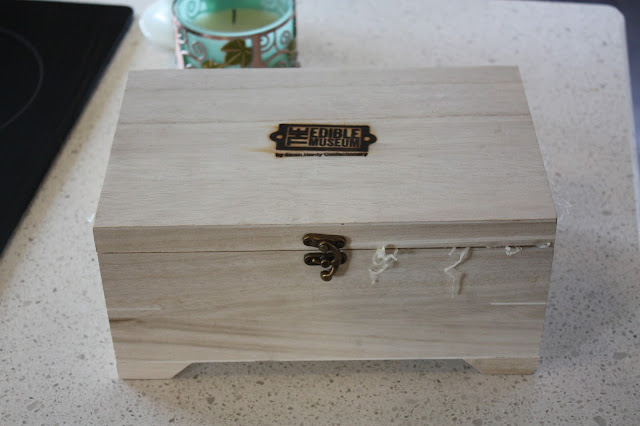 When it first arrived it came in a cardboard box, and inside was this awesome looking collector's item. I really never expected something like this. The papers are actually sticking out because I had opened it and mussed it up a little when I got it, but rest assured it was immaculate upon arrival. 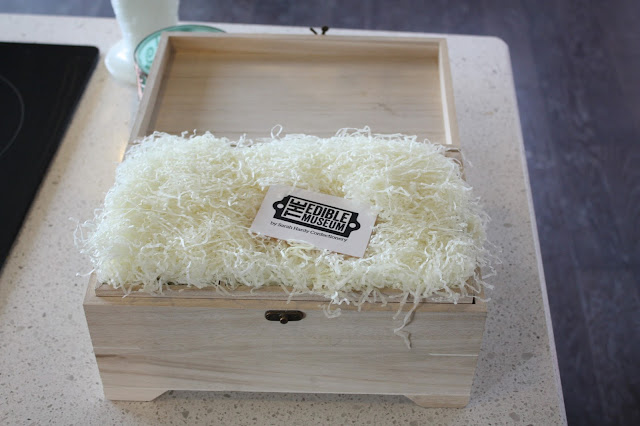 Opening it up, everything was neatly packed away with tons of padding to keep everything safe. 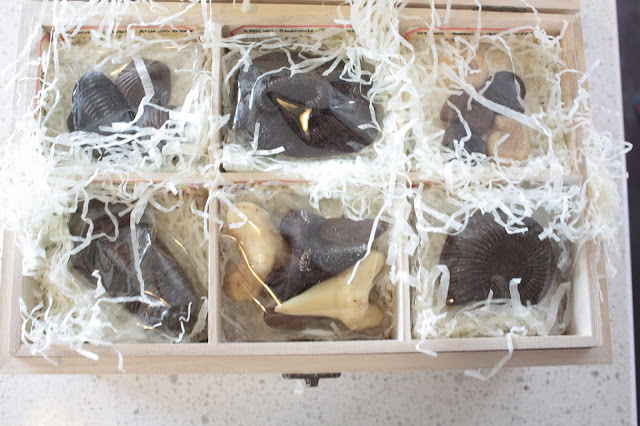 The first layer was the small fossils. Each set of chocolate was wrapped in plastic wrap to keep the chocolate fresh and each section had it's own pillow of bubble wrap below it.  But the best part is easier to see below. Each fossil includes a tag with the species, the age, and the location of the original fossil. This is a paleontologist's dream box for sure. 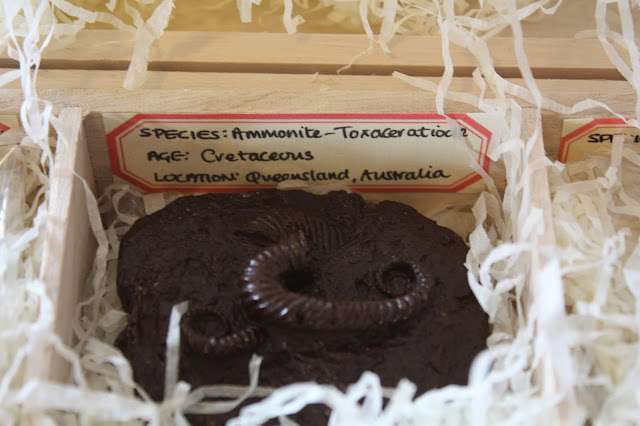 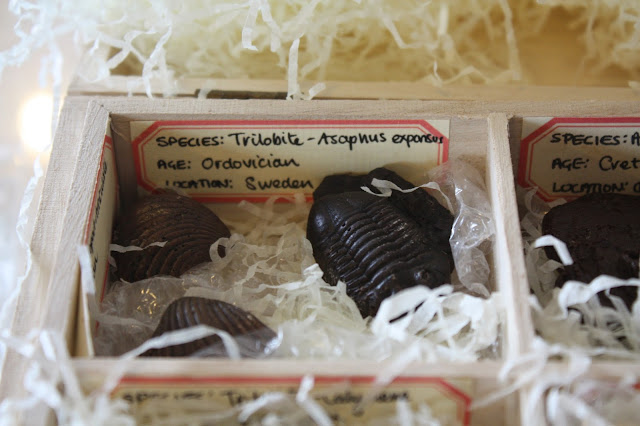 The next box to the left had two sets of fossils and two tags associated with it.
SPECIES: Trilobite - Asaphus exponsus
AGE: Ordovician
LOCATION: Sweden
CHOCOLATE: dark chocolate 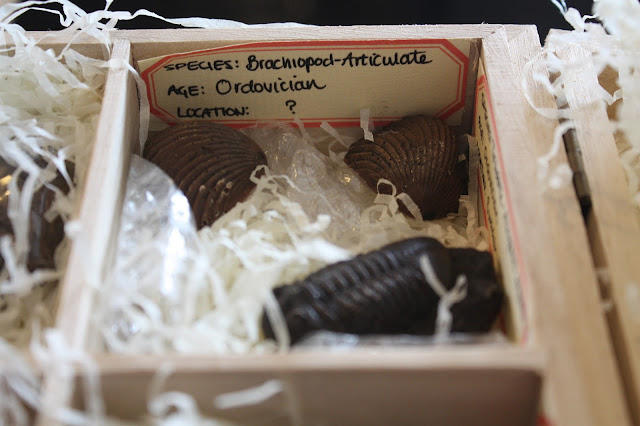 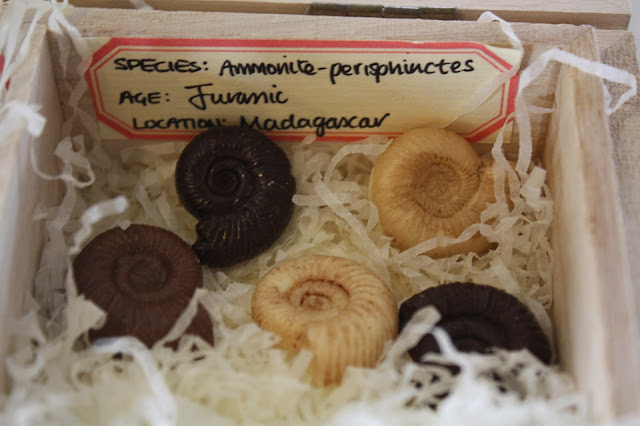 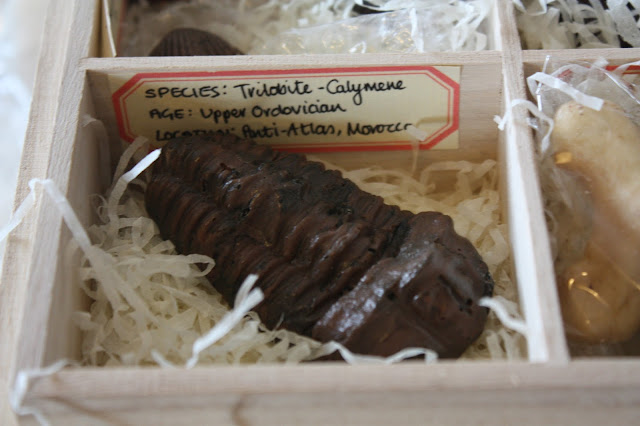 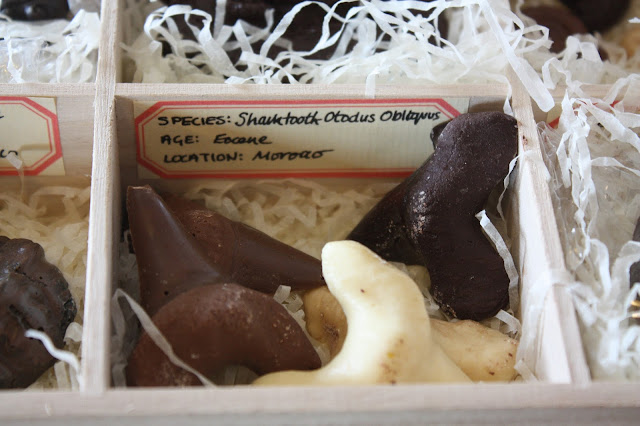 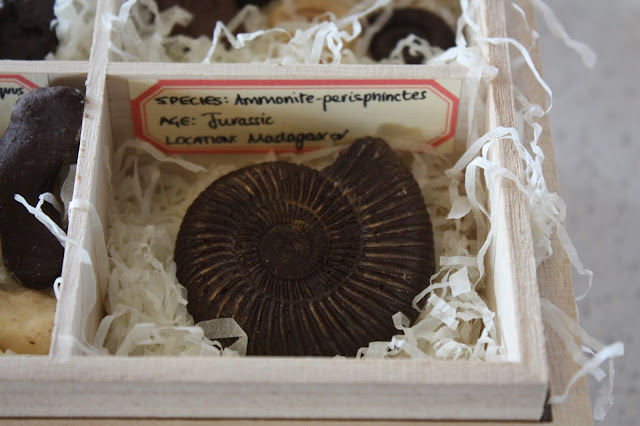 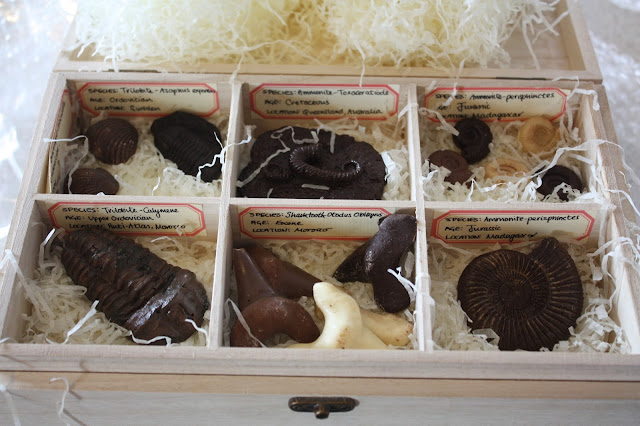 Here is a shot of the top drawer all cleaned up and unwrapped. Also the chocolates were delicious! 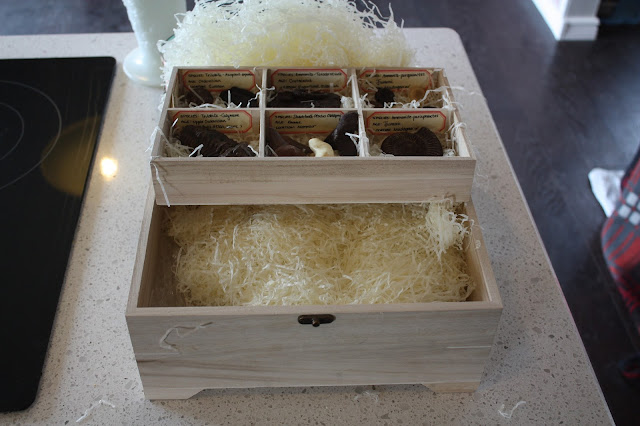 But that's not all! Like a tackle box, the top shelf comes out revealing a large open area below. 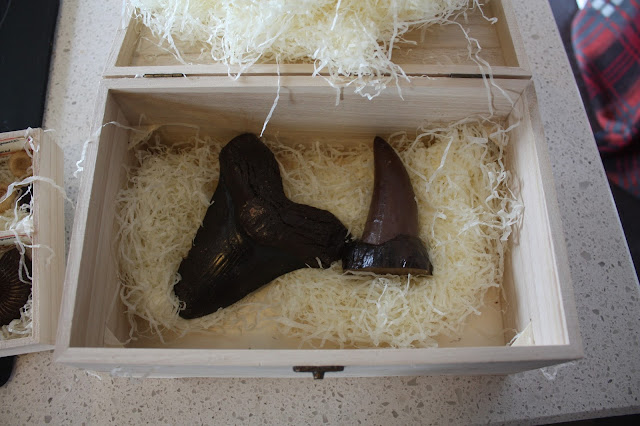 This bottom area contains the Tyrannosaurus rex tooth and the Carcharodon megalodon tooth (incorrectly labeled as "Megalodon" because that's the way everyone does it, even though you wouldn't call humans "Sapiens", you shouldn't call an animal by it's species name only but that's a side issue). My only gripe about the box is that there are no tags for the two bottom teeth anywhere in the box, trust me I looked. But if that is my only gripe, it is a very minor one.
SPECIES: Tyrannosaurus rex and Carcharodon megalodon
CHOCOLATE: mix of milk and dark chocolate

Overall this box gets an A+ from this paleontologist. I recommend this as a good birthday, valentines, or other holiday gift for that fossil lover in your life. The presentation is beyond awesome and the chocolates with definitely delicious. Many of the fossils even included special coatings to make them appear more genuine.
at February 21, 2017