Geology Through Literature - Idylls of the King

The next up on my Geology Through Literature thread is Idylls of the King by Alfred Lord Tennyson published between 1859 and 1885. You can get my complete thoughts on the book/story over at my blog - The Remnant, but for here I will just go into the geological or basic scientific aspects that are brought up in the story.

The story is an epic poem based on the life of King Arthur. There is only one geological instance worth noting in the story itself.

"In dewy grasses glistened; and the hair

All over glanced with dewdrop of with gem


Avanturine, more commonly spelled Aventurine, is a gemstone variety of quartz (SiO2). However, unlike the typical varieties of quartz like amethyst, smokey quartz, or milky quartz (to name a few), aventurine contains flecks of mica and other materials incorporated into the crystal. It is these flecks that give the crystal a "sparkle" as the poem states (geology.com). 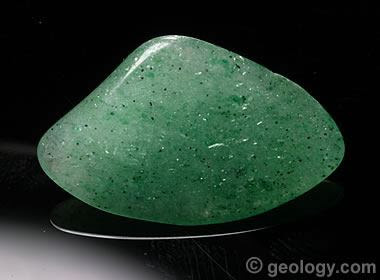 Aventurine was named after the Italian words "a ventura", meaning by chance. This is in reference to the chance creation of the artificial aventurine variety now referred to as goldstone where flecks of copper were incorporated into a bit of glass creating a similar, but much more dazzling, appearance (mindat.org).