The abundance of the elements in the solar system generally decreases with increasing atomic number. Looking at the Periodic Table, Hydrogen (1) has the highest abundance and Helium (2) has the second. However, the third highest abundance is Oxygen down at number 8. The reason for this jump is that there is a stability problem with elements 3-5 (Lithium, Beryllium, and Boron), which causes these elements to have extremely low abundances. Odd atomic numbers also, generally, have lower abundances than neighboring even numbered elements. The result is that Carbon (6) and Oxygen (8) both are pretty close in atomic abundance and are both greater than Nitrogen (7) in the middle of them. 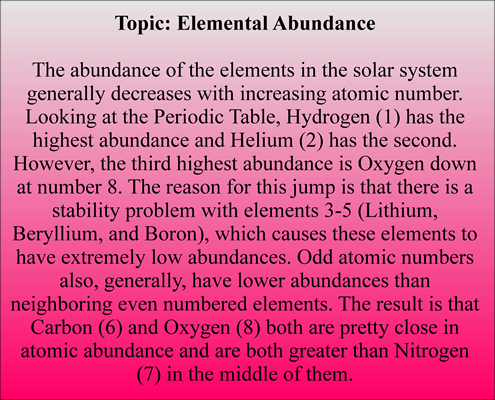