There has been a continuous debate over the pictures showing dinosaurs eating grass and scientists frequently stating that it didn't happen because grass didn't evolve yet, or grasses during the Mesozoic (the Age of the Dinosaurs) were primitive. However, recent research has shown that there were more advanced grasses during the Mesozoic, perhaps even as far back as 100 million years ago (Ma). Non-avian dinosaurs first appear ~230 Ma and went extinct about 65/66 Ma, so they had access to grasses for about ~20% of their existence. 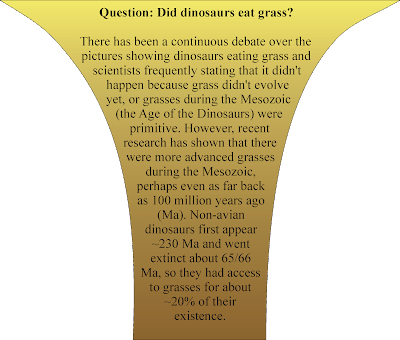