On our latest tour of the deserts of the southwest we started outside of Tuscon at Saguaro National Park. The National Park is divided into two distinct districts. One to the west of Tuscon (the Saguaro West Tuscon Mountain District), which I'll just refer to as the West District, and one to the east (the Tuscon East Rincon Mountain District), which I'll refer to as the East District. We started out in the West District and ended the day in the East District. 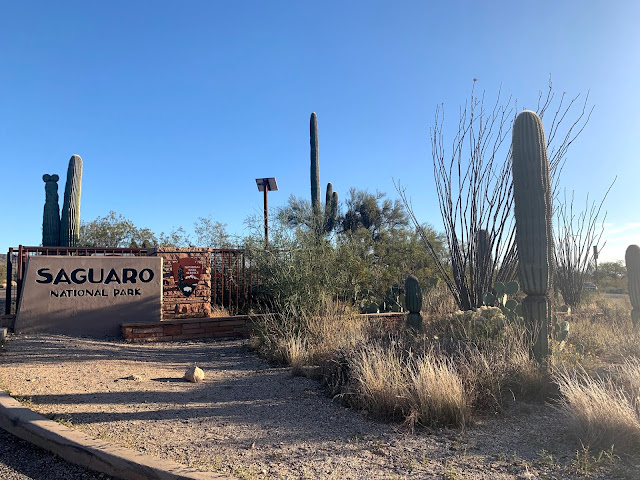 Although we started in the West District, the sign for Saguaro in the East District was far better, so I'm placing that as my entrance sign pic. 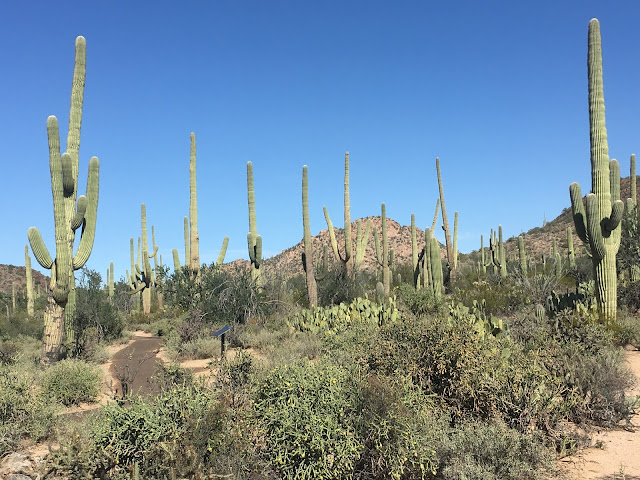 Here we started taking a hike through parts of the West District. Saguaro National Park is located within the Sonoran Desert, one of the largest deserts in North America. The Sonoran Desert is the second largest hot desert in North America, extending from Arizona into California and Mexico. It is also the hottest desert in Mexico, while the Mojave Desert holds the record for the hottest in the United States.

The soil of this region is formed from the easily eroded sedimentary rocks overlying the surrounding mountains. The desert environment of extreme heat during the day followed by freezing cold at night causes the softer sedimentary rocks to expand and contract, breaking them down over time. Heavy summer rains then move these broken up rocks into alluvial fans adjacent to the mountains and into the plains. The ground surface is then covered by a rock known as caliche, which is a calcium carbonate rock formed from the leaching of the calcium from nearby limestones. The caliche ends up forming a crust on the surface that slows water from entering the soil. Shallow root systems help absorb any available water before it is lost to evaporation or percolation through the rocky soil. Caliche is often misinterpreted as dinosaur bones due to the white, roundish quality of the rocks. 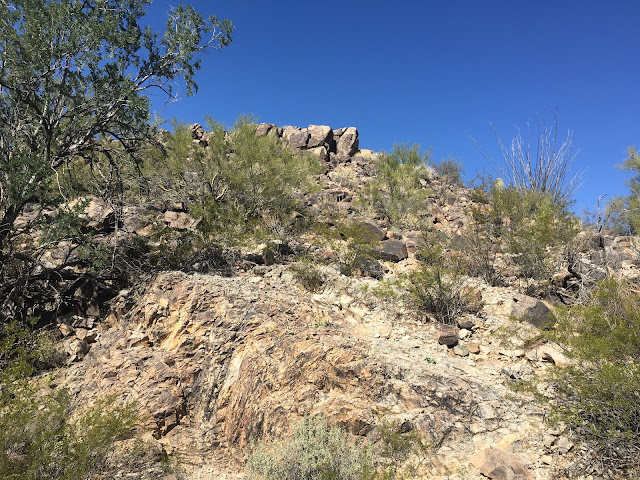 Although Saguaro is a rather large National Park, it has limited access by vehicles, only having one short road loop in each district. There are several short hikes along each loop though. Here we took a hike up Signal Hill, which had some terrific petroglyphs located at the top of the hill. 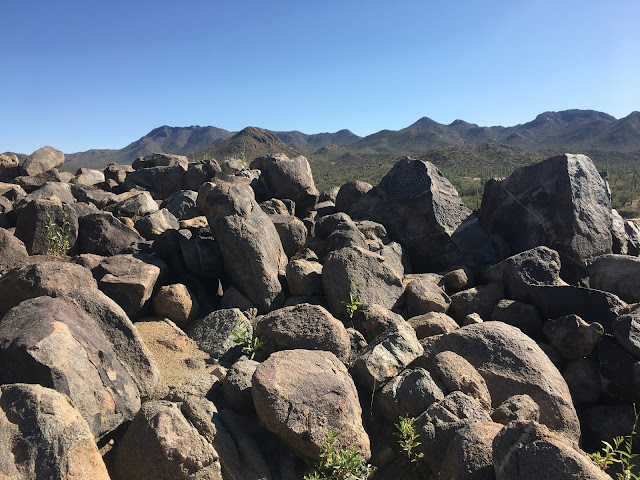 The rocks of Signal Hill and the surrounding country are a granodiorite from the Amole Pluton, which is an intermediate rock with a composition between the common igneous rock granite and its quartz poor cousin diorite. Granodiorite is a course grained rock (meaning we can easily see the mineral crystals) that initially formed deep in the earth from a magma body that slowly cooled at the end of the Cretaceous. This area used to be littered with active volcanoes and it is thought that the region looked similar to modern day Yellowstone. Later plate tectonic extension, a process that had formed the Basin and Range region of the American west, caused these deeply buried rocks to be raised to the surface in the Tuscon region. 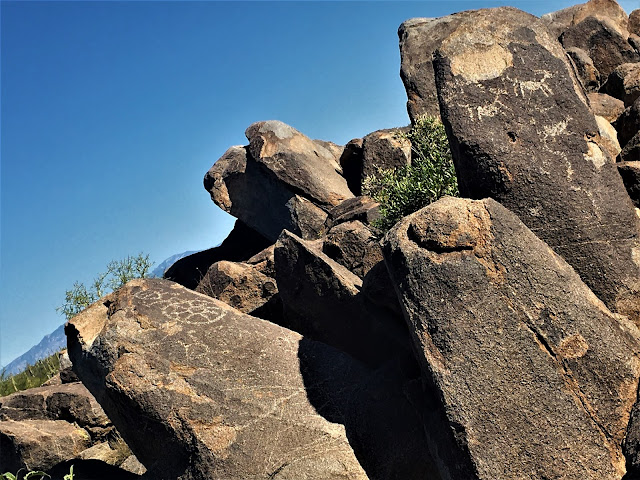 Although not directly geological, the petroglyphs are influenced by geology. These petroglyphs were created by people of the Hohokam culture between 450 and 1450 CE (in the common era). 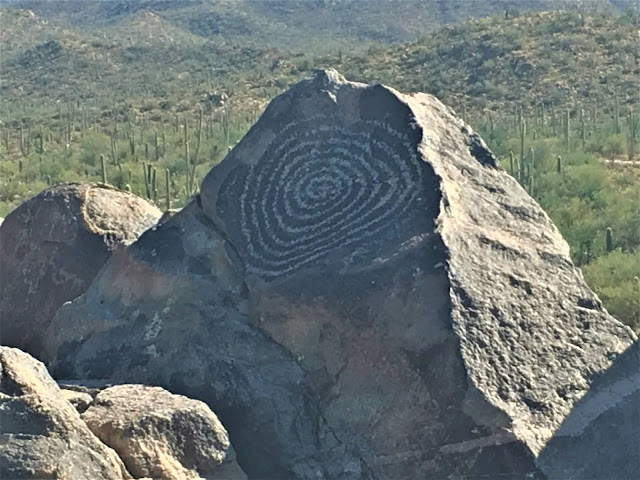 The petroglyphs were formed from engraving within the desert varnish on the surface of the rocks. Desert varnish forms on the surface of exposed rocks, frequently in the desert, from the accumulation of oxidized minerals of iron and manganese. These iron and manganese varnishes produce a darker, blackish rind to the rock. The minerals are accumulated on the surface by bacteria and lichen that live on the rock. The bacteria and lichens are anchored to the rock by clays particles in the atmosphere that precipitate out every time that it rains, taking with it manganese and iron particles. The bacteria and lichens then oxidize the iron and clay turning the varnish black. The more it rains, the more varnish is added to the rock. It is in this rind that the petroglyphs were carved. 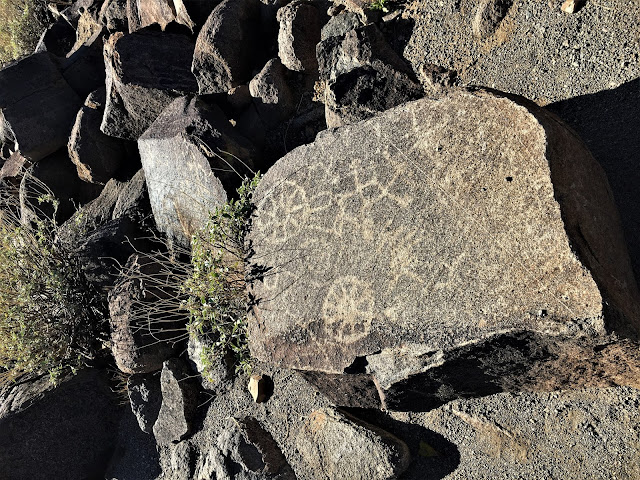 Unlike pictographs, which are painted on and can be washed away unless in a protected area, petroglyphs have the potential to be preserved for a long time after. Over time, the varnish layer will eventually cover over the pictographs when left to its natural processes. 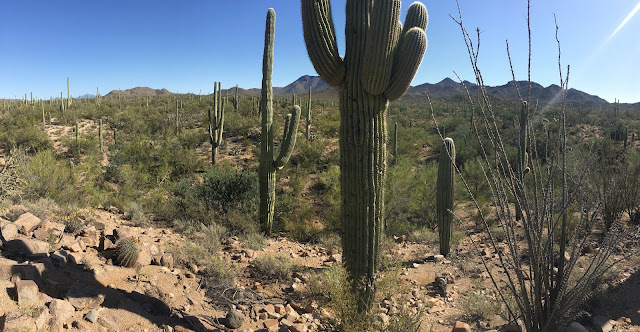 Within the desert, the landscape is dominated by rocks and water retaining plants because a desert, by definition, receives on average less than 10 inches of precipitation in an entire year. The Sonoran Desert averages between 3 and 15 inches per year, varying locally due to elevation differences and whether you are close to, or far away from the local mountains.

As we exit the park in the northeastern portion of the West District we come across the Safford Dacite seen here. This deposit is a gray to light-brown lava flow from the early Oligocene (with different flows aging ~40 to 26 million years ago).

Following our exit from the West District, we proceeded to the East District on the opposite side of Tucson. 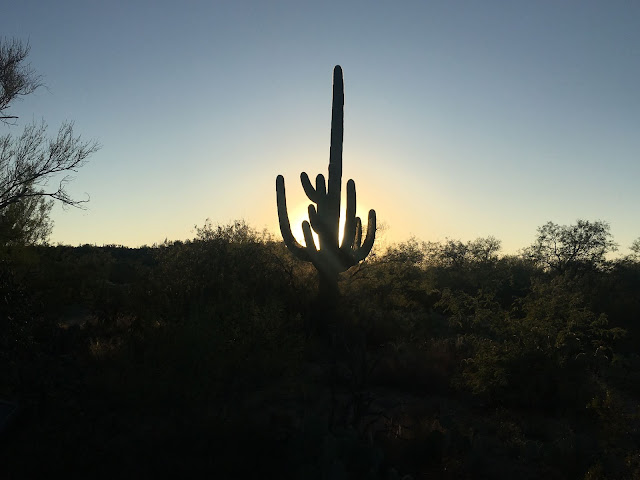 We entered the park towards sunset, so most of our photos were centered on the setting sun.

Although located fairly closely to the West District, the East District contains rocks that are much, much older. What we are looking at here are Precambrian granodiorite and quartz monzonite rocks from the Wrong Mountain Quartz Monzonite that are ~1.5 billion years old. Monzonites are igneous rocks with a lot of feldspar and relatively little quartz, however this rock has enough quartz to be termed a "quartz monzonite" (greater than 5%). With a large abundance of feldspar, that makes the monzonite relatively softer than other igneous rocks like granite and easier to erode over time. 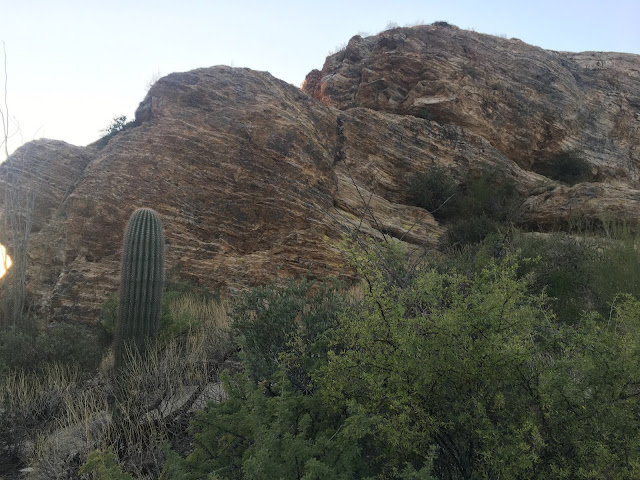 Within the igneous Wrong Mountain Quartz Monzonite are banded metamorphic rocks known at the Catalina Gneiss. This beautiful outcrop also has an age of ~1.5 billion years old and represents some higher amounts of metamorphism, altering the original monzonite, granodiorite, and other local igneous rocks. 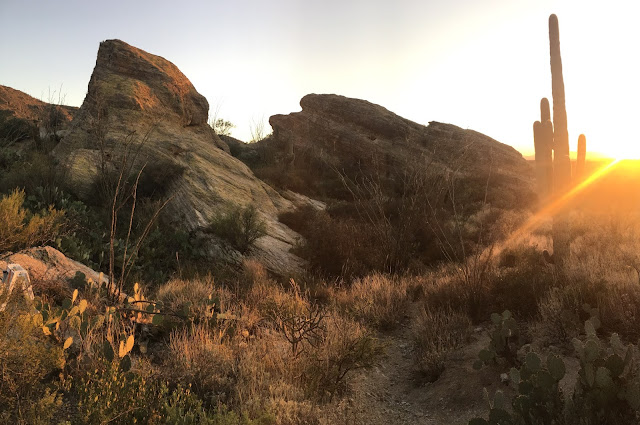 Another view of the Catalina Gneiss. 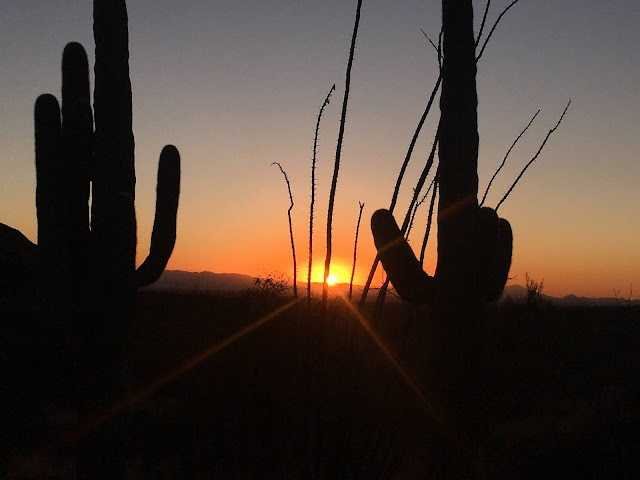 And we leave you with this view of the sun setting to the west.