Geology of the National Parks Through Pictures - Petrified Forest NP

Petrified Forest National Park
Following our visit to Tonto National Monument, we stayed the night in Winslow, AZ just as a massive snow storm struck the region. This forced us to change our plans a bit. The snow storm ended up closing most of Petrified Forest National Park, however we were able to at least hike along the Giant Logs Trail at the southern entrance while we waited for the gates to the rest of the park to be opened. They ended up never opening after several hours of waiting so we had to take the long way around the park without ever actually traveling through the park as planned. 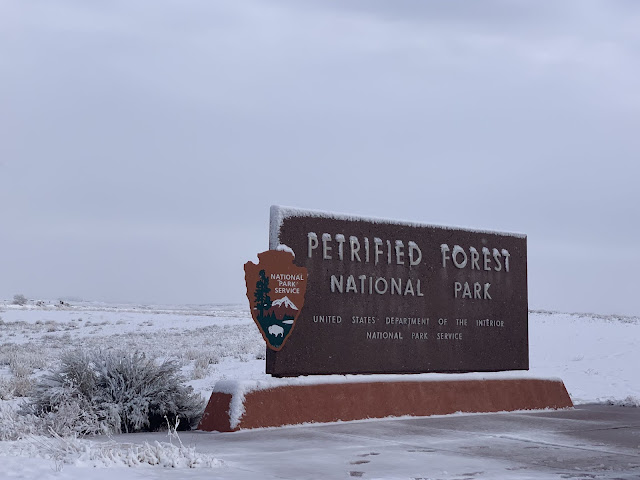 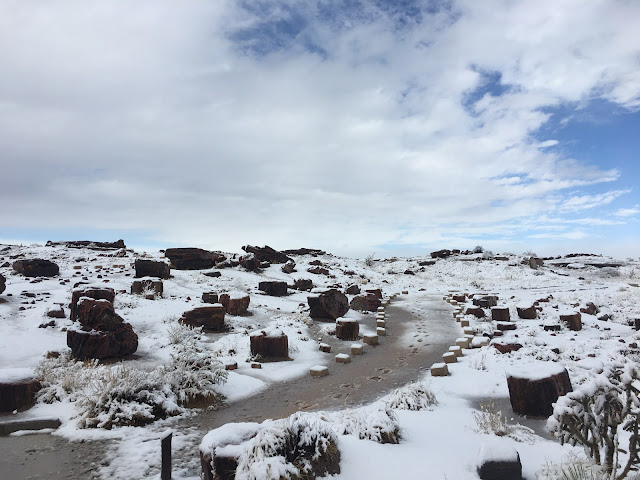 A view up the Giant Logs Trail, showing how many of the logs there really are. Each of those boulders is a part of a petrified tree. This area really is littered with the remains of the enormous petrified trees. The logs here are preserved within a rock unit called the Sonsela Member of the Chinle Formation, a rock unit that spreads throughout much of the Southwestern United States. 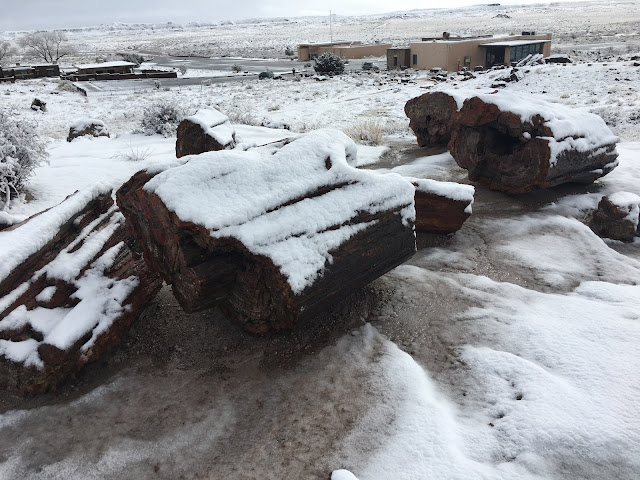 Here is a view from up on top of one of the hills, looking down towards the visitor's center. A petrified log, is really just a fossilized tree. These particular logs lived ~216 million years ago, during the Late Triassic Period. When they died, they fell into a river, becoming buried under sand, silt, mud, and volcanic ash. After they were buried the cells of the tree were eventually replaced with silica (quartz) that was within the groundwater. Over time all of the original organic material was replaced with the silica, leaving behind the fossils. 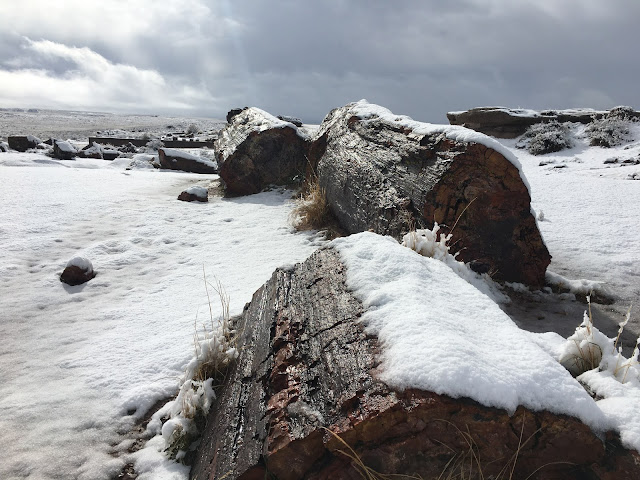 After fossilization, the petrified trees are no longer organic, they are essentially rocks completely composed of silica. Normal, organic trees, when broken will break into long splinters. However, these trees are broken as if someone came through with a chainsaw and neatly chopped up the trunks of the trees. This happens because when silica breaks, it will often break along these smooth surfaces, especially when it is in the elongated form that is in here. These trees are harder than the surrounding landscape so they resist weathering creating these mounds which the trees sit upon. But over time, the ground surfaces are eroded beneath the trees and as the trees start to feel the pressure of gravity they are pulled down, eventually breaking under the pressure. 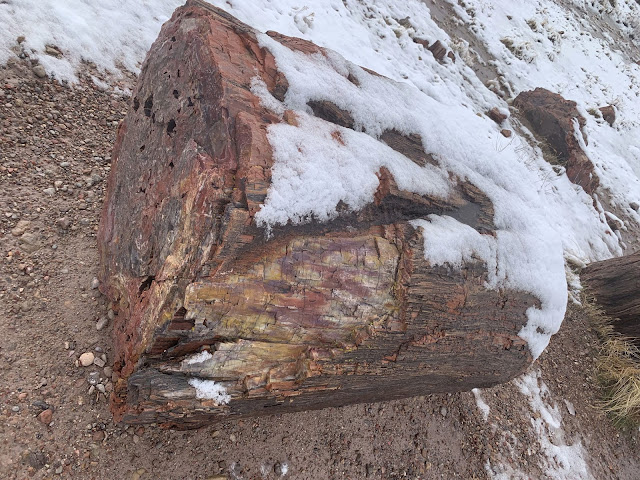 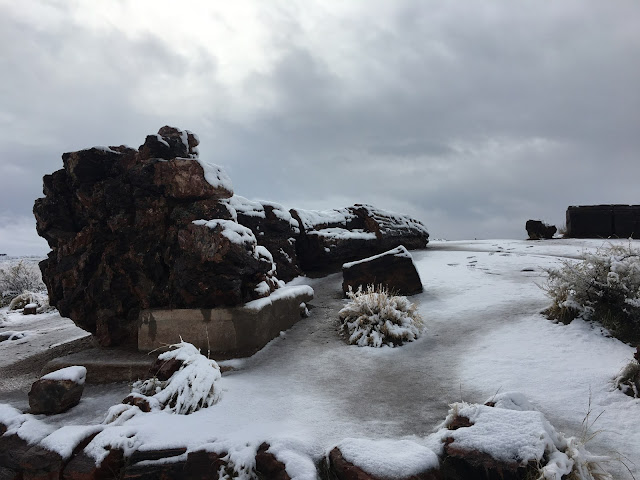 Some of these trees are truly massive in scale. The base of this tree, named Old Faithful, which still preserves some of the roots is around 5 feet across. Although, in today's park, the park would let these fossil succumb to the natural elements, back in the day that wasn't always the case. You can see here a concrete pad was placed under the tree to help prevent future collapsing of the base. 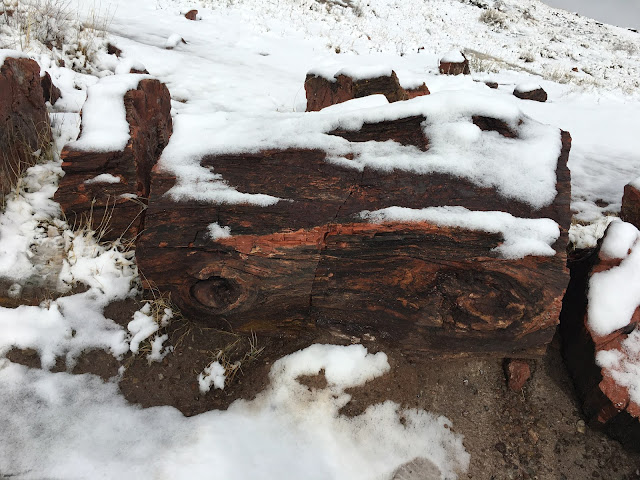 The amount of detail preserved in the trees in truly astounding as well. Here you can see several of the knots within the trunk still preserved. 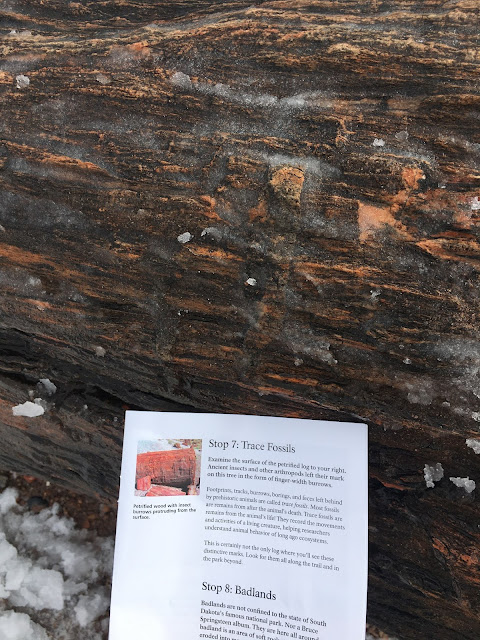 And here we have the traces of insect burrows through the wood preserved (the vertical lines here through the horizontal wood grains). 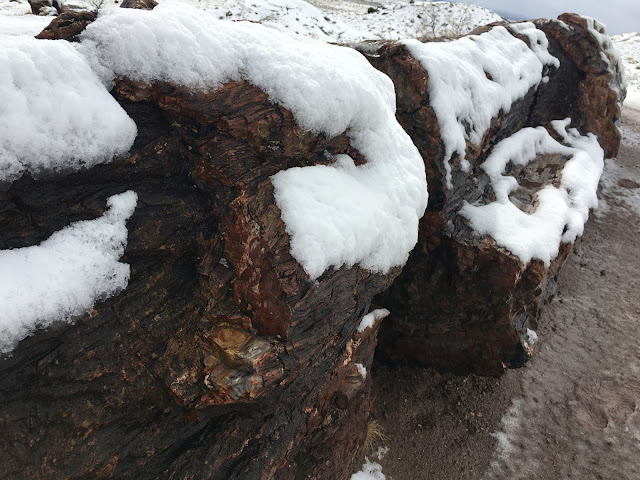 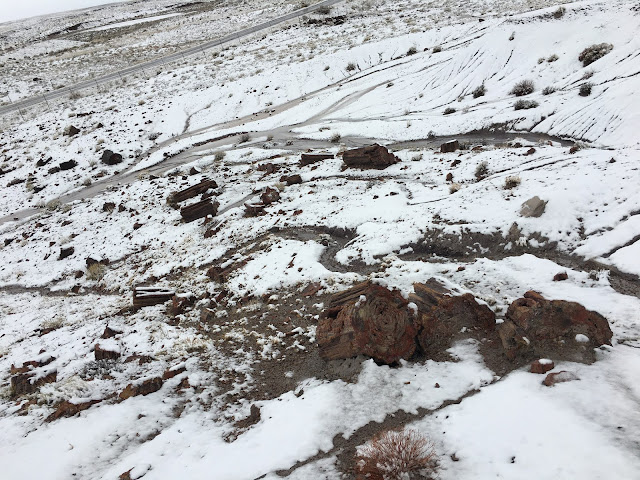 View down a slope with several of the petrified logs in view. 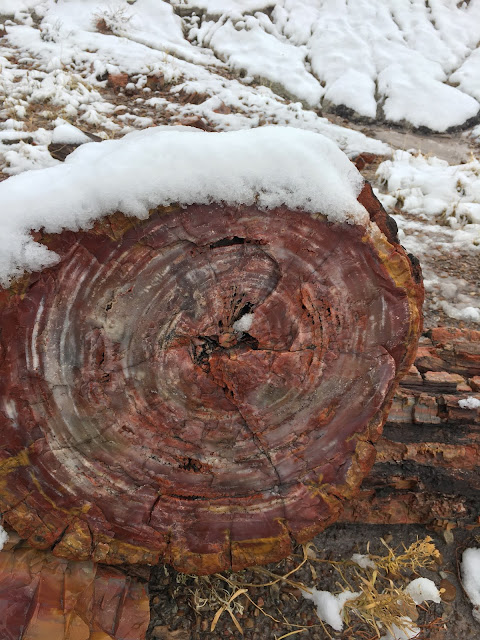 Cross section of one of the logs, highlighting the colors within the rock. The detail preserved within the petrified logs is so fine that often scientists can still count the tree rings from the original trees to determine the ages and environmental conditions within which these trees initially lived.