Canyon de Chelly National Monument
Our final park this trip, after a shortened visit to Petrified Forest and needing to skip another park entirely was Canyon de Chelly, which we ended up staying the night at the park hotel. Because of the snowstorm, the roads ended up being a bit hit or miss, with the lower elevation roads practically snowless and the higher elevation roads nearly impassable. 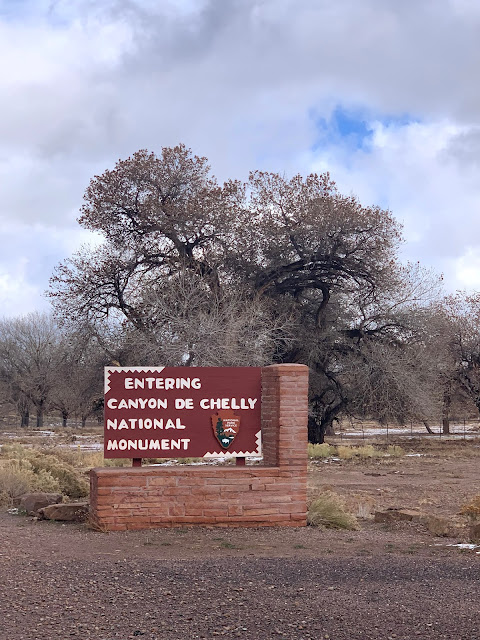 The entrance sign. The name of the canyon is a Spanish corruption of the Navajo word "Tsegi" meaning rock canyon. The pronunciation of "de Chelly" has slowly morphed over time from the Spanish "day shay-yee" to the modern day pronunciation of "d'SHAY". 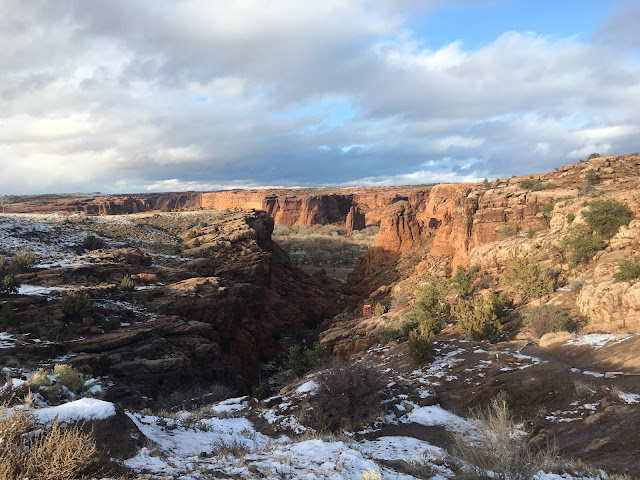 Canyon de Chelly is a unique park, since it is an actively lived in park. The park is run in conjunction with the Navajo Nation, where members of the Navajo Nation also live in the park and actively help preserve the ancient cliff dwellings within the walls of the canyon. The park is composed of several canyons, the primary two being Canyon de Chelly (the southern canyon with views from the road facing north) and the northern canyon, Canyon del Muerto, with views towards the south. The two canyons split off from each other towards the visitor's center.

A little bit further along the canyon, this is a view across the Canyon de Chelly from the Tsegi Overlook. 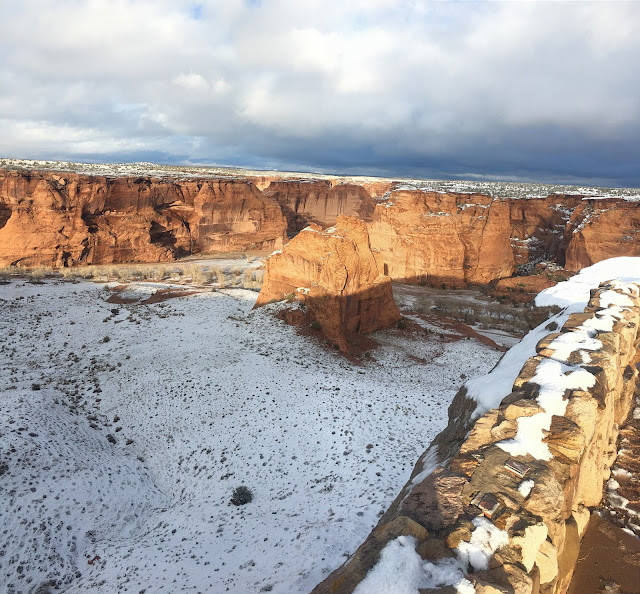 View from the next stop at Junction Overlook. The canyon is made up almost entirely of one rock unit, the De Chelly Sandstone, which is a Permian age (~200 million years old) aeolian sandstone. Aeolian means that it is formed by blowing wind, in particular sand dunes, or a desert environment. When sand dunes are frozen in time, such as when they become rocks, and eroded you can see features termed cross-bedding. These rock preserve an ancient desert that used to be located here. We will look a little bit more into cross-bedding in a later photograph below. A cross section of the Canyon de Chelly National Monument geology from the USGS. Although most of the canyon walls are composed of sandstone, there is a bit of the Triassic age Shinarump Conglomerate along the tops of the cliffs and the older Permian Organ Rock Formation along the base of the canyon. 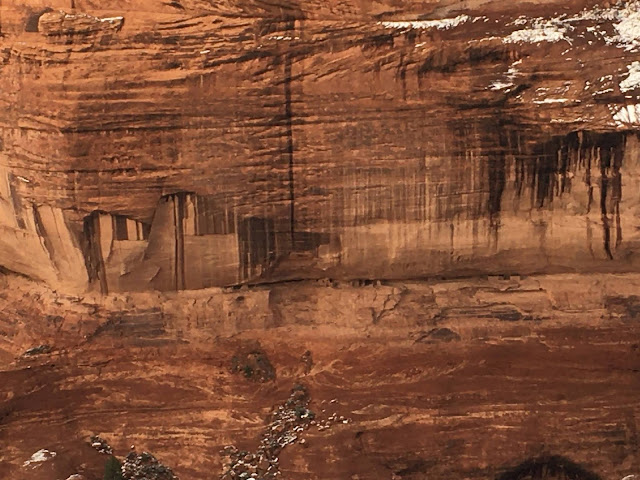 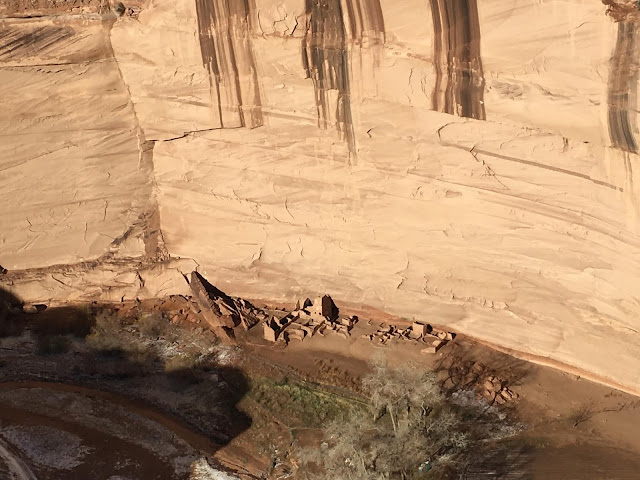 Here is a closer up view of Antelope house. The buildings were constructed using a combination of the De Chelly Sandstone as building blocks and adobe bricks that were created from the mud and baked.

View from the Mummy Cave overlook. The cliff dwellings are located along the left side of the photo. 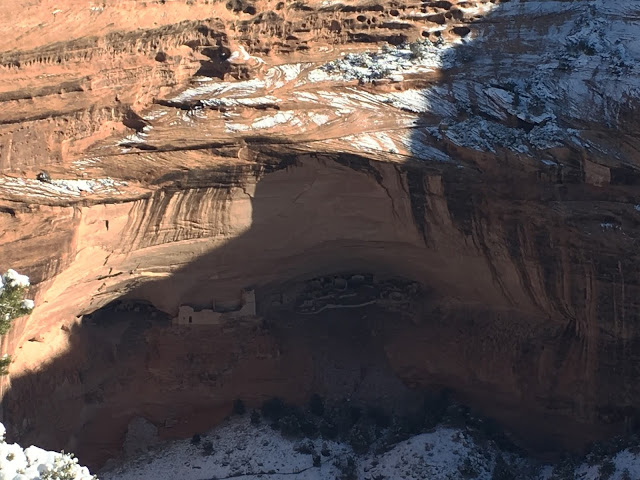 Close up view of the Mummy Cave cliff dwelling. 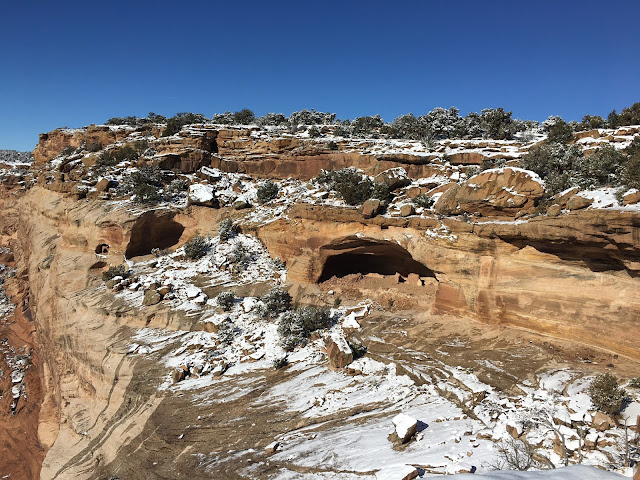 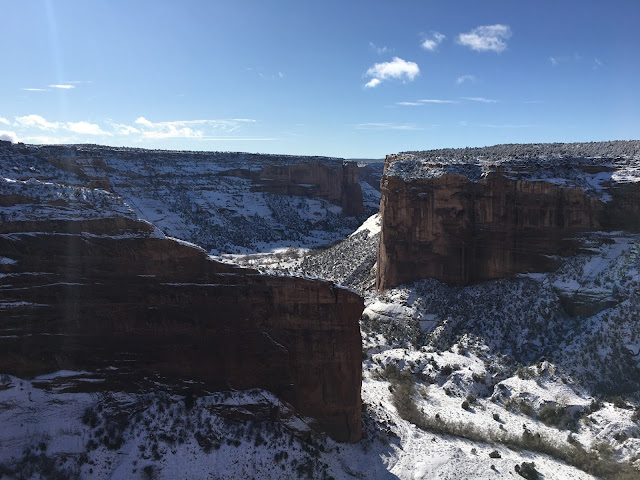 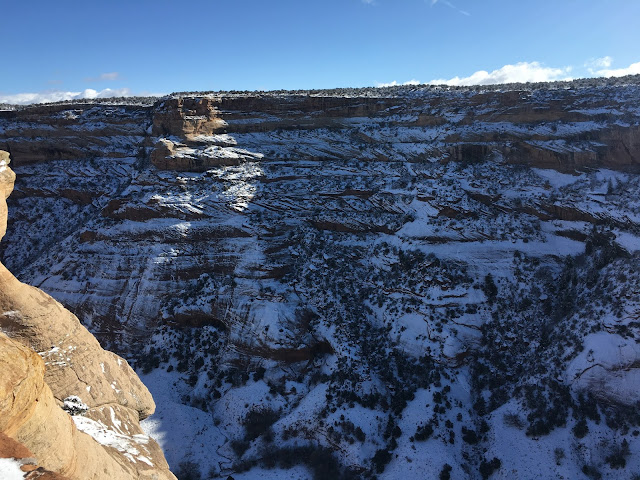 As sand is pushes up over a dune by the wind, the sand grains form parallel lines on the slipface of the dune. These parallel lines of the grains are what we see preserved within the rock. Image from Carleton.edu.