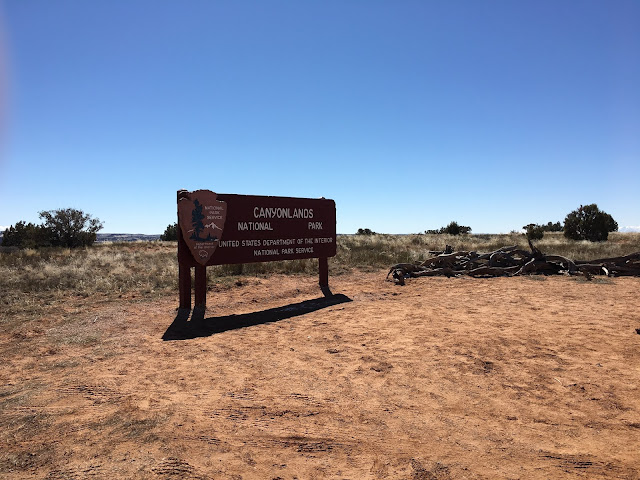 The first stop was the Island in the Sky district and here is the entrance sign from there. 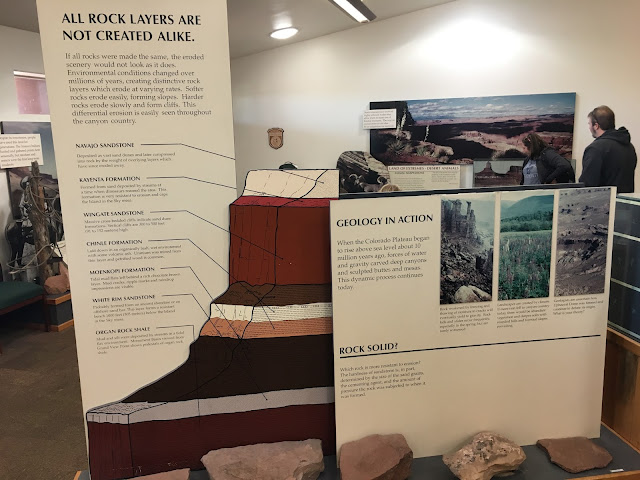 Here is a great display from the Island in the Sky Visitor's Center showing the rock units across the canyons and some information from each rock unit. Canyonlands, like its neighbor parks, sits within the Colorado Plateau. This is an area of the United States encompassing the Four Corners region, and surrounding areas, where the ground is being pushed upwards. This causes a great increase in elevation of the land surface, and when the land surface is being pushed up, rivers erode downwards at an increased rate. The area has rocks that cover a tremendous range of ages and these pictured here are only a small portion of everything in the region. At the bottom and the top, the Organ Rock Shale is Permian in age, ~270 million years old, to the Navajo Sandstone, which is Jurassic in age, ~180 million years old. 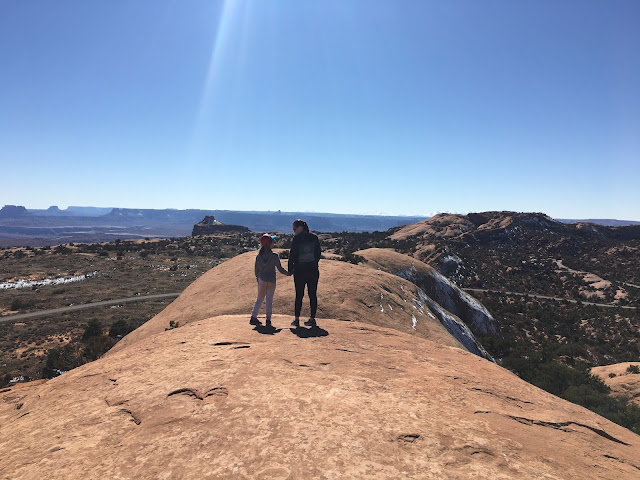 We are usually limited to one relatively easy hike per day, due to physical limitations, and for this trip we decided on Whale Rock. Whale rock is a dome of Navajo Sandstone. The Navajo Sandstone is a preserved prehistoric desert that used to cover large parts of the American west. The reason that geologists know that the Navajo Sandstone was a prehistoric dune is because of the prominent cross bedding located within the beds. Cross bedding preserves the internal structures of sand dunes. Whale Rock is the rock we are currently standing on top of, after having completed the hike, looking towards the southwest. 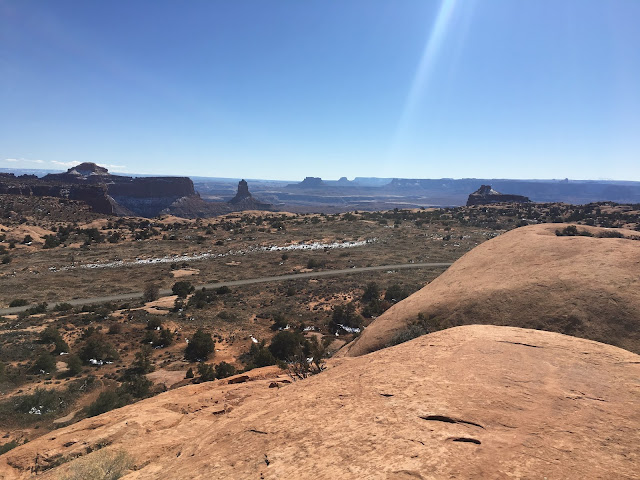 View from the top of Whale Rock looking towards the south, a bit to the left of the above photo.

A panorama to the right of the above shots looking more to the southwest. This is a long distance shot of what is known as Upheaval Dome.

After leaving Whale Rock we traveled down the road to get a closer look at Upheaval Dome. Here is a close up view looking down into the eroded dome from the same direction as the picture above, only much closer. Upheaval Dome is a mystery. Here all of the rocks are bent upwards towards a peak, that has since been eroded away. This is what is known as a dome. But how did it form? There are two theories. One is that there used to be a layer of salt under the ground from a prehistoric basin (like the Bonneville Salt Flats). Then other rocks were deposited on top of the salt layer. Over time the salt got squished upwards into the mushroom shape, distorting the rocks around it.

Another, and the more popular theory, is that this is the site of a prehistoric meteorite impact. When the meteorite struck the surface everything was forced downward initially, but then the rocks rebounded from the impact, causing everything to be pointed upwards. The reason the dome is now a "basin" is because as the rocks are bent, the rocks at the top portion of the dome crack. These cracks consolidate the water, restricting the erosion to these areas. Eventually the dome becomes a basin as the rocks are washed away.

What is known, though, is that this is a mishmash of rocks at the base of the dome with the White Rim Sandstone, a Permian desert deposit, is mixed up and faulted with the overlying Moenkopi Formation, a series of interbedded sandstones, siltstones, and shales from a Triassic tidal flat environment. The upper cliff edge is the Wingate Sandstone, another Jurassic desert sandstone, a little older than the overlying Navajo Formation, with the Chinle Formation in between, forming the slopes of the canyon walls. The Chinle Formation is also Triassic in age and represents a wide variety of interbedded rock units (sandstone, conglomerate, siltstone, shale) from river and lake deposits. 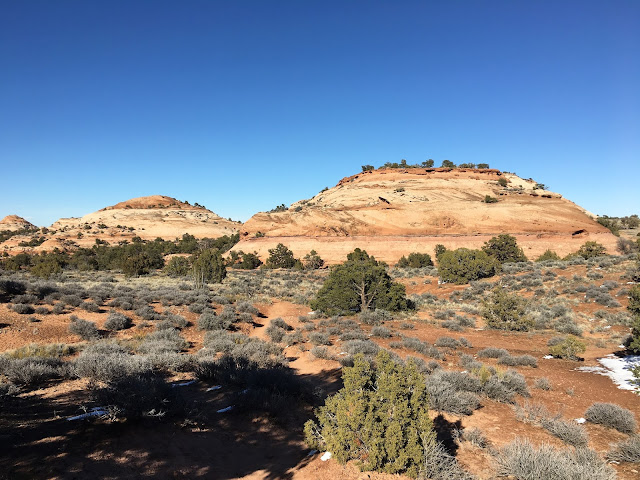 View of the Wingate Sandstone (I believe), showing the cross bedding in the distance. The rock units themselves are deposited horizontally here, while the cross bedding is the angled lines through the units. These are formed from sand, as it is pushed over the dune crest and rolls down the leeward side, or slipface. This creates an ordered layer of sand on the slipface side of the dune and that is what is preserved as cross bedding. This rock unit is topped by the Kayenta Formation, which divides the Navajo Sandstone from the Wingate Sandstone. The Kayenta Formation is a Jurassic age series of sandstones, shales, and limestones from a meandering river environment that frequently preserves dinosaur tracks. 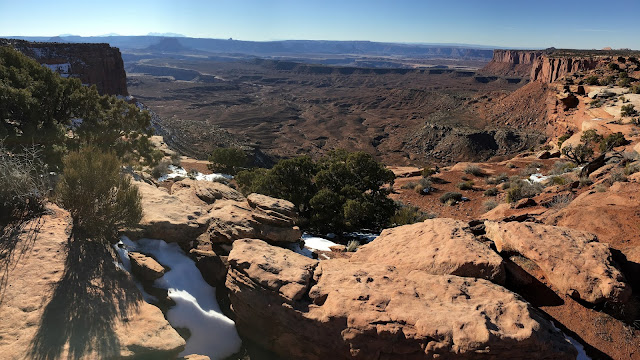 A bit further to the south is the Grand View Point, here looking towards the west. Off in the distance is the Green River canyon, which eventually joins up with the Colorado River to the left of this picture. 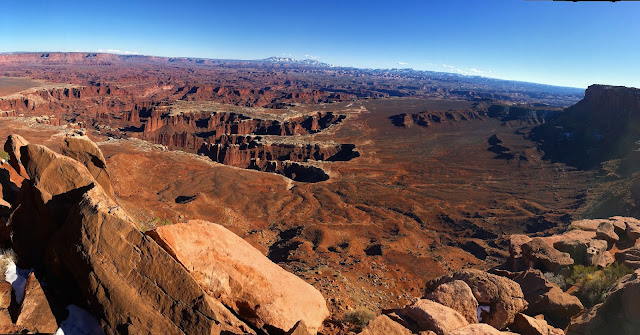 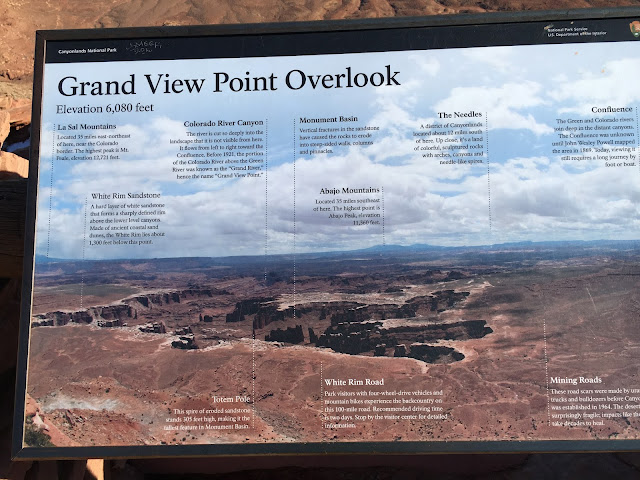 This is a display showing the features from the above picture. The cliff edges are created from more resistance rock overlying softer rock. Typically in this region that means sandstones are the more resistant rocks. Currently, I am standing on a sandstone layer within the Kayenta Formation, while the edge and flatter region before the main canyon down below is the White Rim Sandstone. 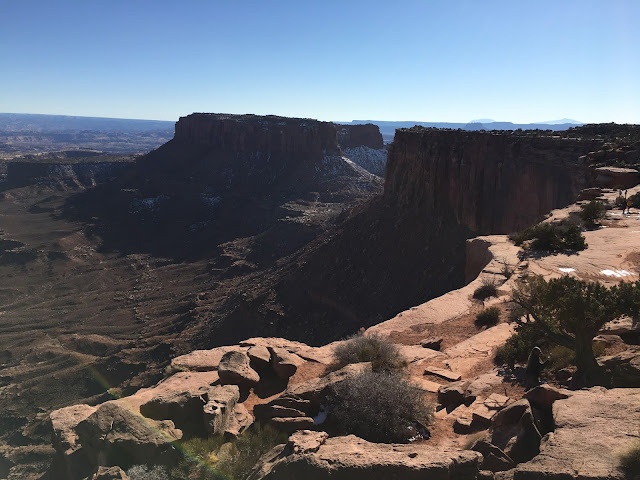 View from Grant View Point looking towards the Confluence of the Green and Colorado Rivers. The steep cliff faces here are made up of the Wingate Sandstone. 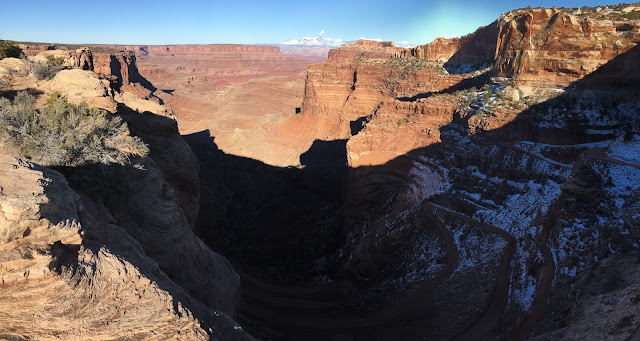 On the way out of the Island in the Sky district we stopped at the Shafer Canyon Overlook. Here is a view of Shafer Canyon looking down on the rather steep Shafer Trail Road switchbacking down the canyon walls. From here we headed to Arches during the 2019 trip but we came back to Canyonlands in 2020 to hit up the Needles district to the south. 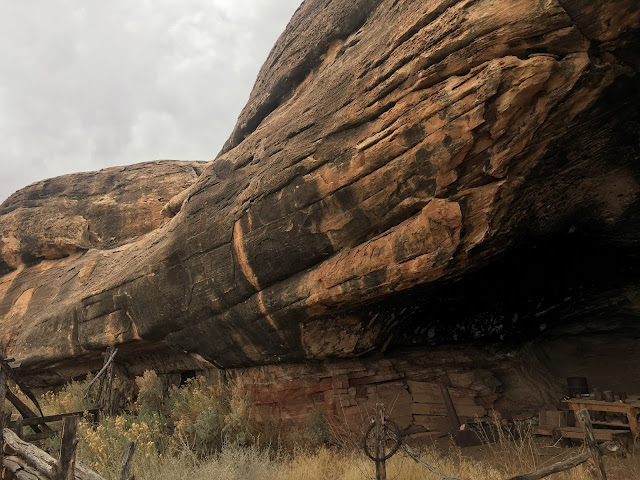 While within the Needles district we decided to take a hike on a rather rainy day at Cave Spring, which is a historic cowboy camp. The hike took us up and around the sandstone ledge seen here. The sandstone unit here is the Permian age Cedar Mesa Sandstone (~286 million years old), which is just slightly older than the formations seen above in the Island in the Sky district. The Cedar Mesa Sandstone is a near-shore sand dune deposit (the whiter, more resistant layers) which has frequent river and lake deposits (the redder, softer layers seen on the picture as the bottom layer). 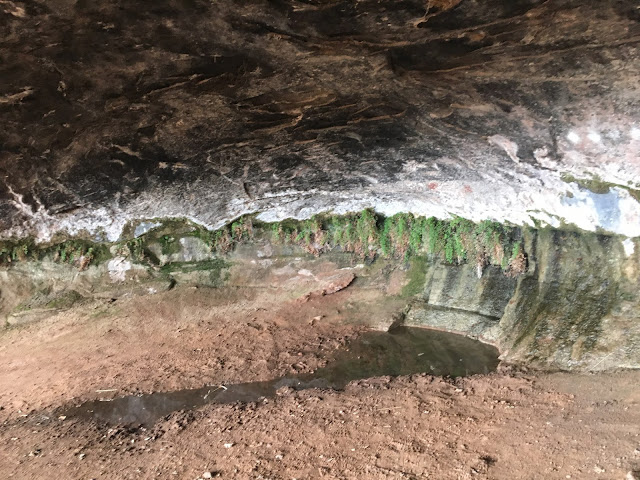 The Cedar Mesa Sandstone is known to be a fantastic aquifer, and that is because water soaks up easily into the gaps between the sand in the sandstone. Many aquifers nationwide are actually within sandstones because of the porous nature of the rock. Here we have the actual Cave Spring, where the water that had soaked into the overlying sandstone is seeping out on top of a more water resistant layer below. And although we are in the desert with very little water nearby, this cave/alcove has abundant water and plant life just stemming from the cave walls. These caves were not only the location of a fairly recent cowboy camp, but also housed many Native American settlements throughout its history. 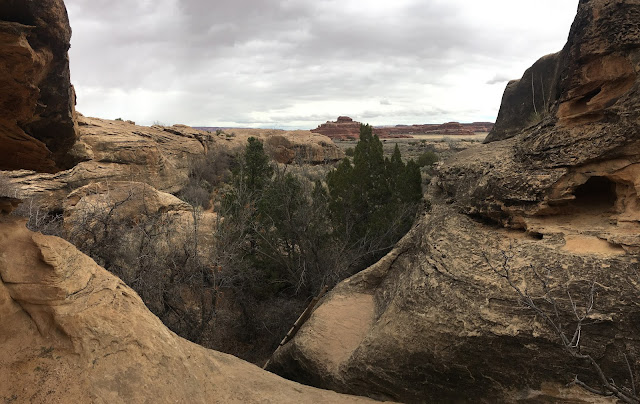 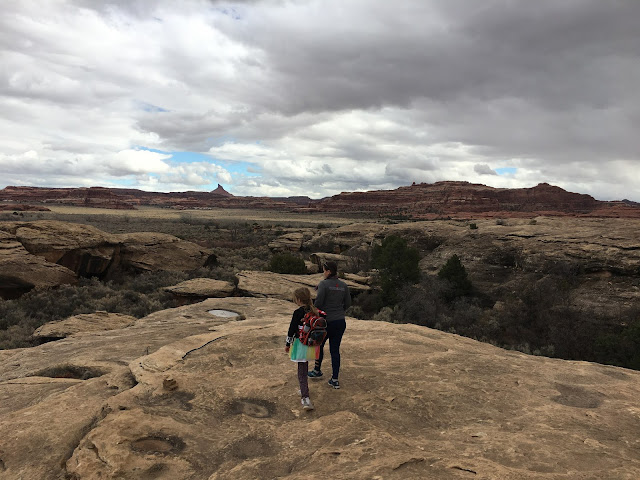 A view on top of the Cedar Mesa Sandstone within this area looking towards the southwest. 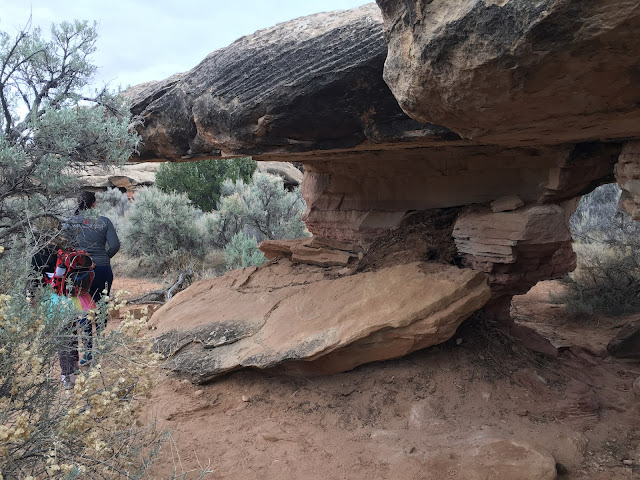 Back down below the local cap of the Cedar Mesa, looking at the lower sandstone/siltstone beds that the spring was flowing along on top of. You can see the cross bedding of the overlying sandstone pretty well from this angle.

Further to the west is a road that nearly gets to the Confluence of the Colorado and Green Rivers. Here is a view from as close as you can drive, the Big Spring Canyon Overlook, looking towards the confluence towards the west. The Needles District is named for the features seen here which are throughout the district. These are vertical spires composed of the Cedar Mesa Sandstone, the same as at the Cave Spring above. The spires are formed from erosion along cracks, or joints, that naturally form a checkerboard pattern within the Cedar Mesa Formation. The cracks then consolidate the water, causing more erosion in these areas, further widening the cracks until only individual spires are left. The valley of the canyon here is the Elephant Canyon Formation, also Permian in age, formed from shallow coastal marine deposits.