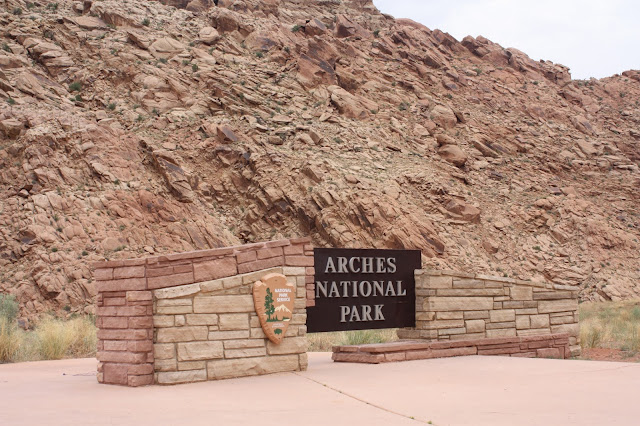 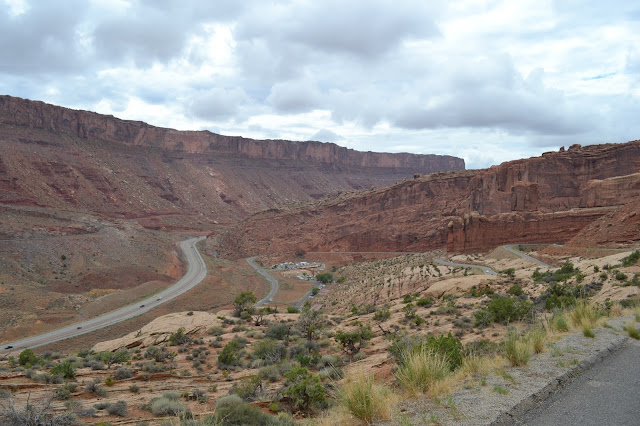 In order to get into Arches, you must switchback up this rather steep road initially from the main entrance. Here is a shot from the top of the entrance road looking down on the main entrance/visitor's center. 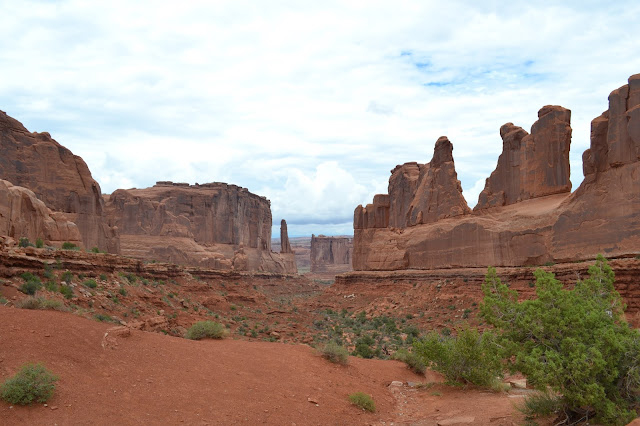 Arches National Park is another park within the Colorado Plateau region of North America, where the ground has been forced upwards. Because of this the upper layer of rocks have a tendency to have a lot of erosion and cracking within the rock layers. Within Arches, the dominant rock formation is known as the Entrada Sandstone, a Jurassic age (~150 million years old) sandstone, formed from a coastal dune environment. There are a ton of geological erosional features throughout the park and I will highlight  few of them. Here is an area shortly upon entering the park known as Park Avenue. 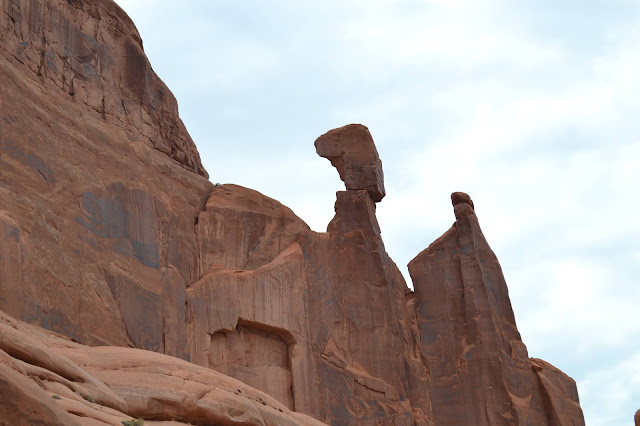 Here is a precariously balanced rock within the Park Avenue area. 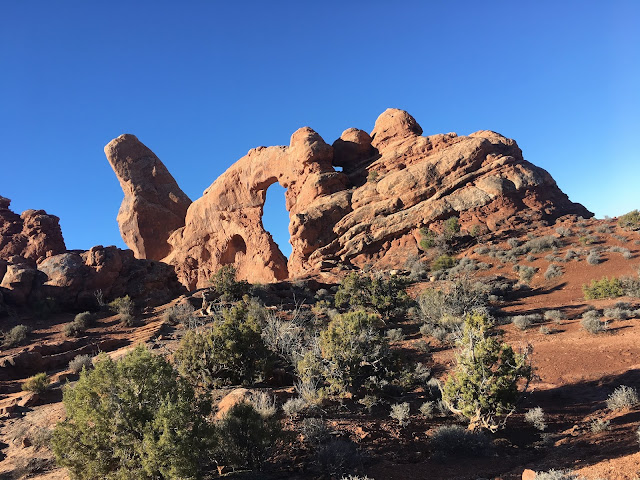 Within the central part of the park is a fantastic congregation of arches, all within a very short hike. Here are two arches attached to each other with the larger arch known as Turret Arch. The structures in Arches National Park formed from the process of erosion. Over time, erosion widened the cracks that had formed during the uplift of the region. These cracks, or joints, created long, parallel breaks in the rocks called fins. 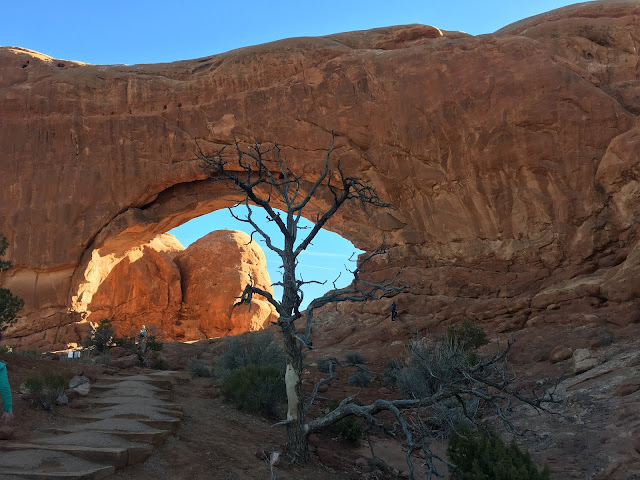 Turing around from Turret Arch are two very large arches, known as the Window Arches. This is the South Window, with the North Window to the right out of frame. Not only does water erode the outside of the rock but water soaks into the rock itself. The Entrada Sandstone is very porous, allowing for the rain water to easily soak into the rock. As the water filters its way down into the sandstone it eventually reaches the base of the sandstone at the contact with the lower rock unit, the Carmel Formation. The Carmel Formation is a slightly older, Jurassic age, series of mudstones, siltstones, and sandstones, formed in a tidal flat environment. The much higher percentage of mud prevents water from flowing through it, so as the water flows through the Entrada, it eventually pools at the base of the sandstone on top of the Carmel Formation.

The cement in the Entrada Sandstone is one of the key ingredients. Many sandstones are cemented by silica, which is basically a dissolved type of quartz, a very hard mineral. Those types of sandstones are incredibly difficult to erode. The Entrada Sandstone, however, is cemented with calcite, a mineral that easily dissolves in slightly acidic water, such as the calcite in caves. As the water sits at the base of the Entrada, it slowly dissolves away the calcite cement. Then as the water freezes and thaws over the winter months, the expansion and contraction of the water breaks apart the rocks and carries away the sand. Leaving an ever widening hole at the base of the rock formation.

Within the same area we have my favorite set of arches in the whole park, Double Arch. Here is a view across the parking lot. Eventually, as more material erodes away, these holes are widened over time, creating thinner and thinner pieces of overarching rocks, that will eventually erode away all together. 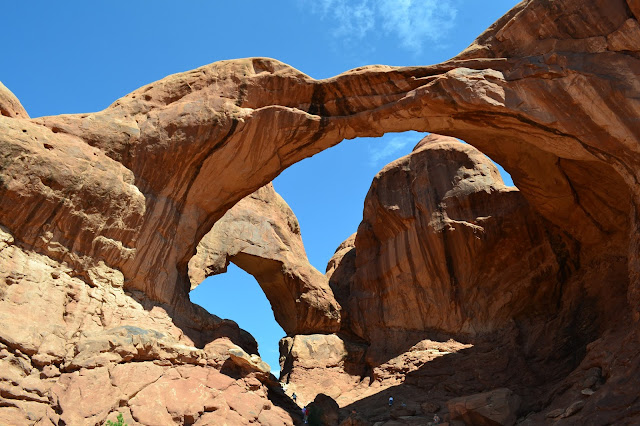 Here is a view of the Double Arch from underneath. The formation of these arches is a precarious balance between too much and not enough water though. Even though you want water to dissolve the cement and carry away the sand, too much rain would erode these formations way too quickly. This region only gets 8-10 inches of rain a year, making this a desert, and also providing just enough water to slowly break down the rocks. The erosion of the arches is so fantastic that it can leave behind these thin bands of stone, until eventually erosion will make the stone too thin to support itself and eventually will collapse. 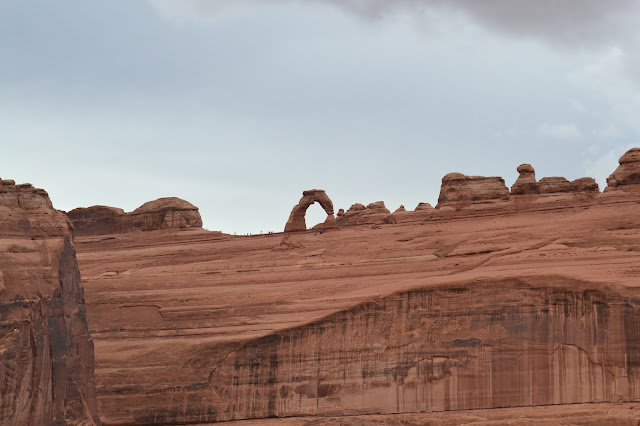 Perhaps the most famous arch in the park is Delicate Arch. There are two ways to see Delicate Arch. Either you can do the harder, and longer, hike to the arch itself. Unfortunately, we were unable to do that, so we opted for the shorter and easier hike to the overlook. 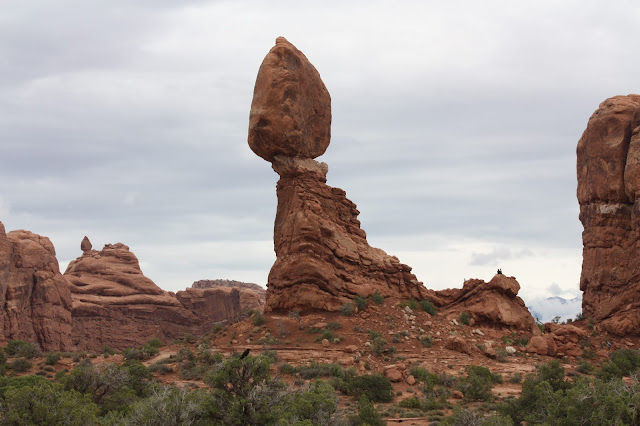 Here is one of the more famous formations, Balanced Rock. Besides just the arches there are other geological erosional features such as this. Here more resistant rocks overly softer rocks. The Entrada Sandstone is the large bolder sitting upon a pedestal of the softer Carmel Formation, described above. Since the Carmel Formation is a softer rock, it erodes away easier than the Entrada Sandstone, creating features like this. 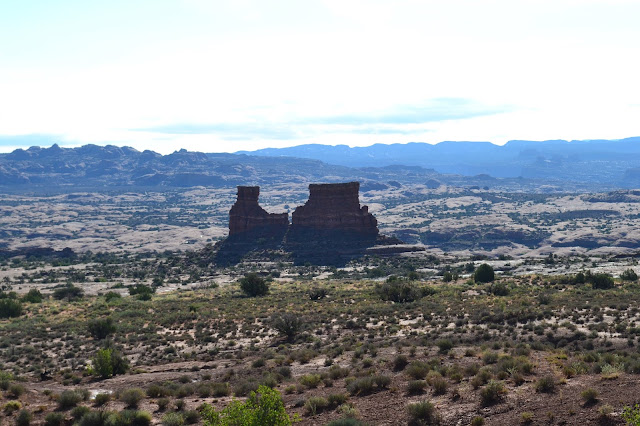 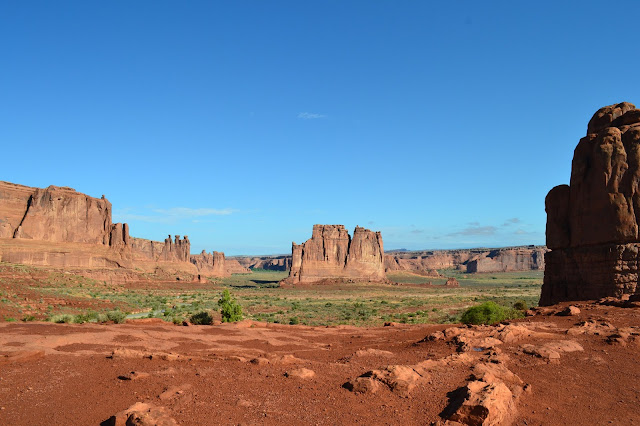 View of the Courthouse Towers.