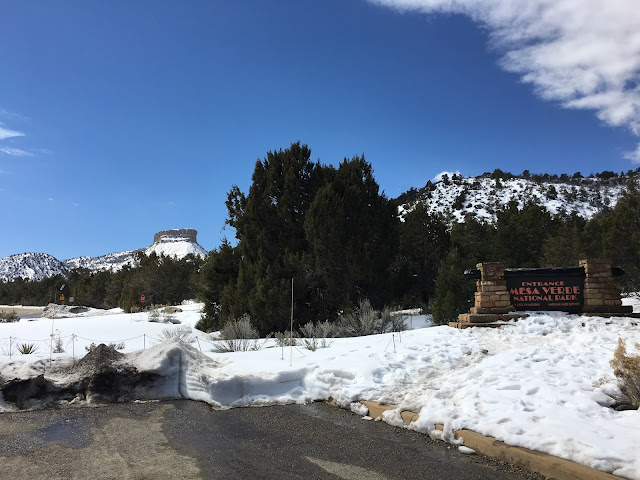 Mesa Verde National Park entrance sign within the glory of winter snow. In the background on the left you can see Point Lookout mesa. There are four main rock units within the park. The oldest rock unit is the Mancos Shale, located at the base of the mesa. The Mancos Shale is Cretaceous in age (~86 million years old) and was deposited within the deep waters of the Cretaceous Western Interior Seaway that covered a large portion of North America across the middle of the continent. Because of the deep waters, the Mancos is mostly gray shale. On top of the Mancos, and capping the mesa, is the very hard Point Lookout Sandstone. The Point Lookout Sandstone is a Cretaceous age (~81 million year old) rock unit composed mostly of sandstone but it does have some layers of shale, that was deposited along the shore of the Cretaceous Western Interior Seaway as the seaway was retreating. 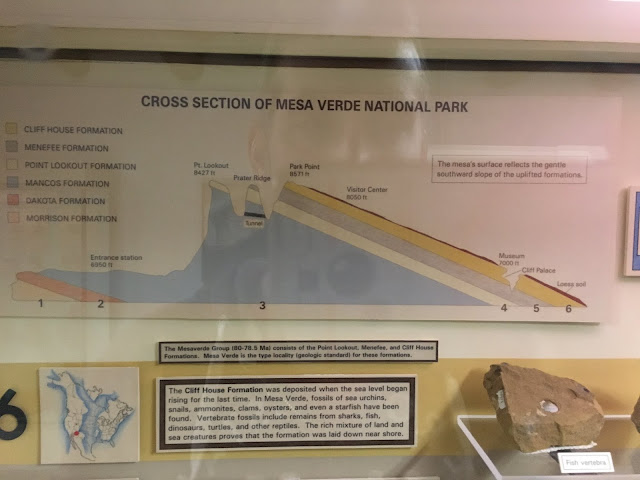 Here's a good breakdown of the rock units from Mesa Verde's Archaeological Museum. You can see here that Mesa Verde is tilted towards the south, with all of the rock units similarly tilted, at a 7 degree angle. This actually makes Mesa Verde not a mesa, but a cuesta instead, which by definition is a tilted mesa. The very high Point Lookout Sandstone in the previous picture ends up being below ground by the time we get to the cliff houses further into the park, and below the other two rock units in the park, the Menefee Formation and the Cliff House Sandstone.

Here is a view towards the north from the Visitor's Center. Even though we are fairly high up here, we are still at a fairly low spot compared to Point Lookout because of the tilt of the "mesa" (cuesta). 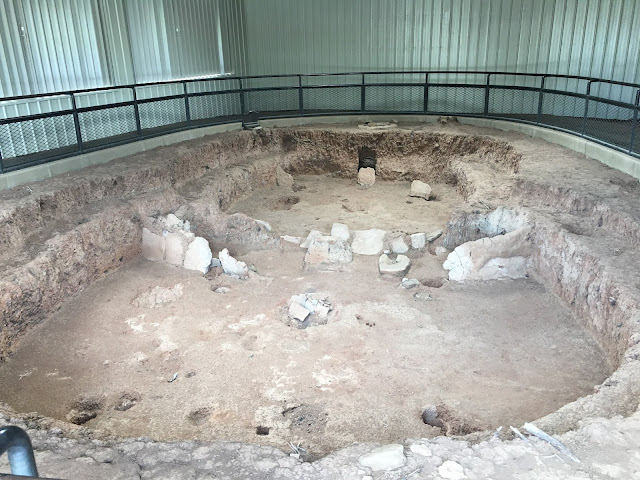 Before the fantastic cliff houses were built, there are several pit houses excavated and preserved within buildings across the "mesa".  The pit houses were constructed of mud plaster and adobe on top of a wooden frame between 550 to 750 CE. It is because of that wooden frame that scientists were able to accurately date the houses through a process known as dendrochronology. I'll go more into dendrochronology below.

Eventually, as we travel far enough to the south, we are able to travel up onto the Mesa and look down onto the cliff dwellings. From the overlooks you can get a great view of the Cliff House Sandstone, as well as the underlying and slightly older, Menefee Formation. The Menefee Formation is series of thin sandstone beds, shales, and coal that were laid down 78 million years ago and is what separates the Point Lookout Sandstone below from the Cliff House Sandstone above. During the deposition of the Menefee Formation, the Western Interior Seaway was completely gone and a coastal plain was here with swamps scattered about. Within this view, if you zoom in, you can see Cliff Top Palace on the left and Sunset House on the right. 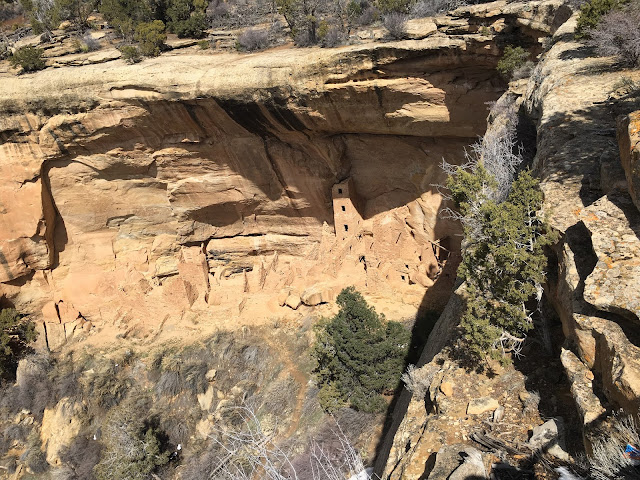 The cliff dwellings were built between the 1190s to late 1270s CE. The cliff houses are both built within and built from the Cliff House Sandstone. This is a Cretaceous age (~75 million year old) sandstone that was deposited when the Cretaceous Western Interior Seaway again advanced across North America. With the advance of the sea, large amounts of sand were deposited, much of it with ripple marks indicating a shoreline. Here we are looking at the Square Tower House. 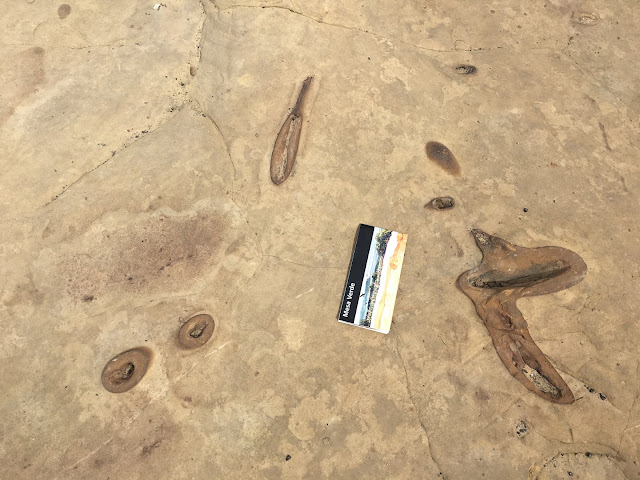 Although fossils are far from common within the Cliff House Sandstone, there are some examples of something that may be confused for a fossil, however these are what are known as concretions. As harder, iron-rich minerals, flow through the sandstone, the minerals will often consolidate around objects within the sandstone such as shells and other fossils, forming these erosion resistant tubes or balls. 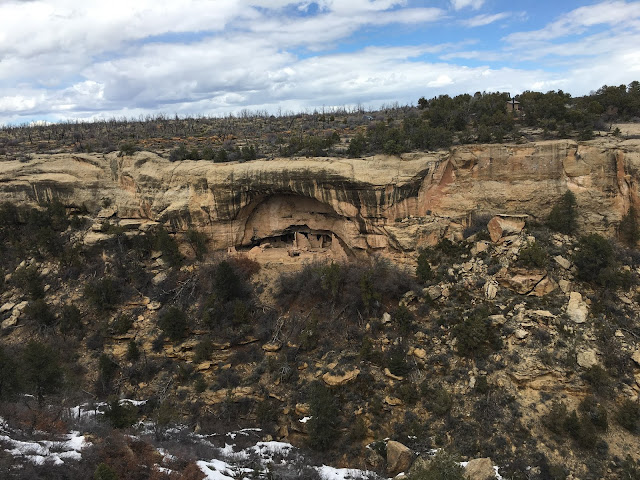 Here is a view of the Oak Tree House cliff dwellings. You can see here the alcove that had naturally been created within the rock, as erosion breaks off the outer rocks into the valley below due to the softer Menefee Formation not supporting the upper Cliff House Sandstone. You can also see quite a bit of desert varnish, AKA manganese staining, located above the cliff house. The desert varnish is created when manganese and iron particles are brought to the rocks by the wind and cemented in place by bacteria and water on the rocks. 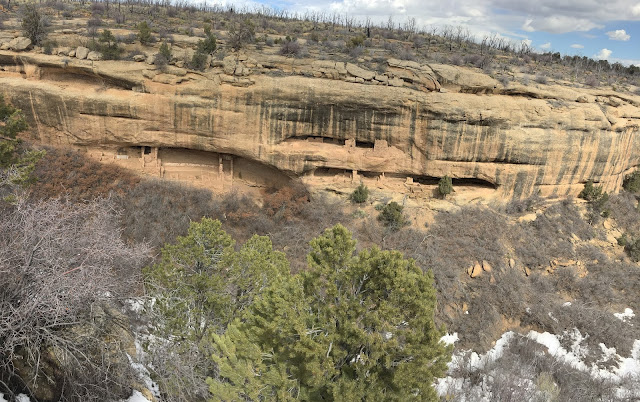 Here are some more cliff dwelling further down from the Oak Tree House (located to the right in this picture). These are known as Fire Temple and New Fire House. 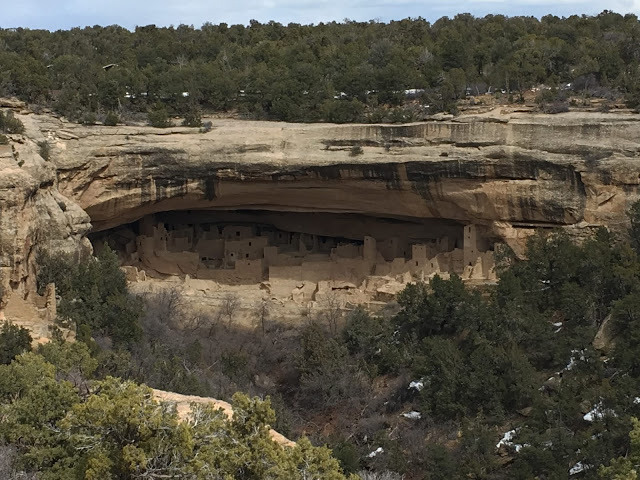 One of the most remarkable overlooks in the entire park is from the Sun Temple overlook, looking down on the Cliff Palace. An absolutely gorgeous construction feat.

A zoomed out view from the Spruce Tree House overlook showing the weathering along horizontal cracks within the rock, which end up creating ledges along the edge of the canyon by water erosion over time. 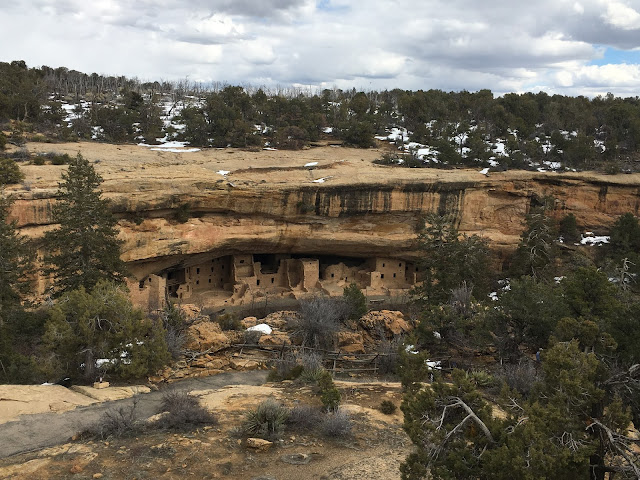 Here is the Spruce Tree House, the best preserved cliff dwelling according to the park brochure. From this overlook you can a truly spectacular view of the cliff house itself without even going on the trail to the house (which was closed at the time we visited). 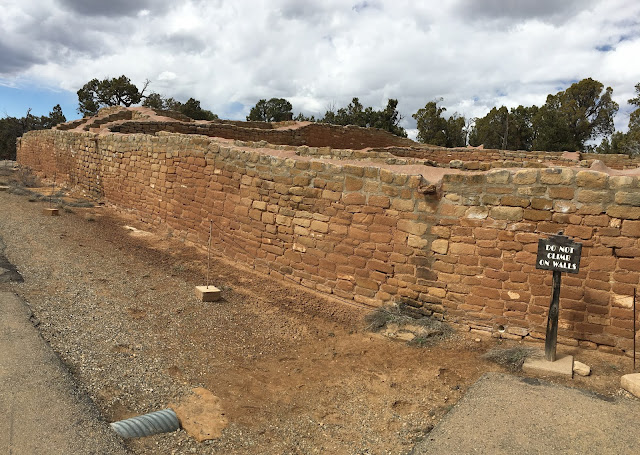 On the top of the surface of the "mesa" are several buildings as well, including the massive Sun Temple, the remains of which only show partially how big it really was with estimated 11 to 14 foot high walls. The entire building was built from the readily available Cliff House Sandstone, on which the building sits. 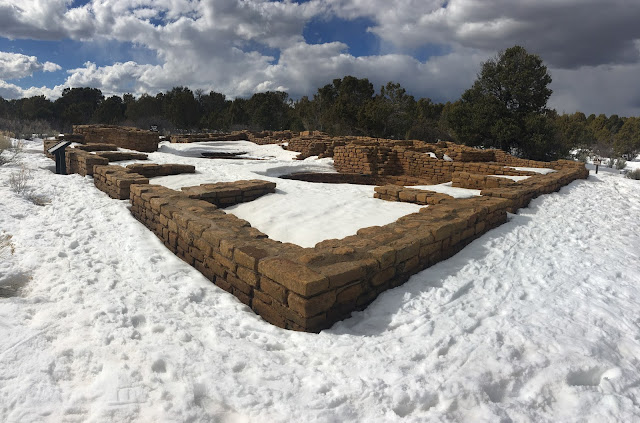 Due to the snow some of the surface buildings were a little more difficult to get to, but that didn't stop me. Here are two of the buildings from the Far View sites, also using the Cliff House Sandstone. 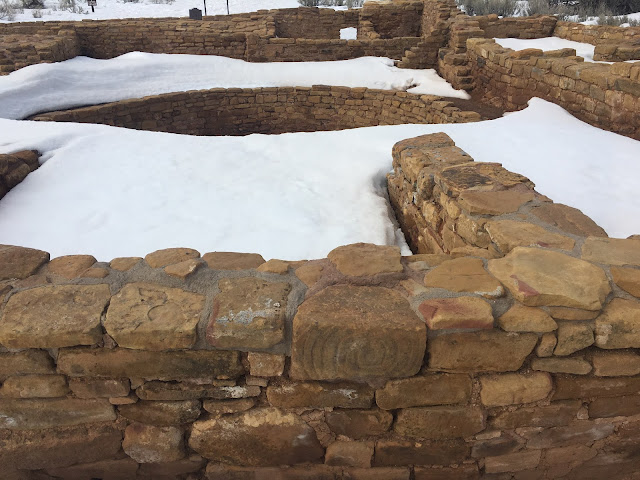 Here is another of the Far View Sites building. This building was interesting because of the carved spiral within the central block on the building. 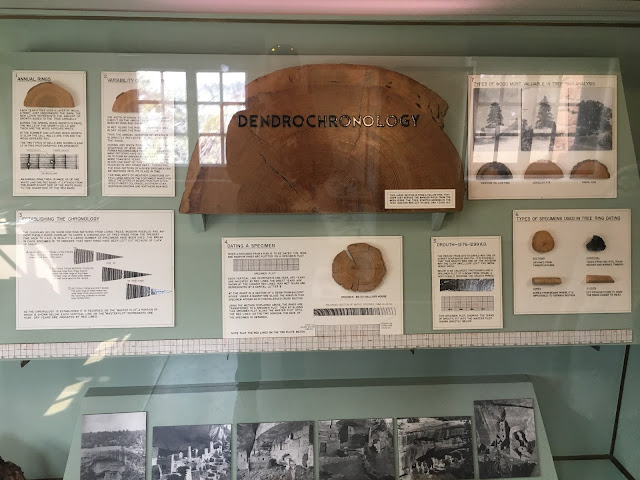 As discussed above, dendrochronology was used to date many of the buildings within the park. Dendrochronology is the process of counting tree rings and using the various thicknesses to match them up to known tree ring thickness. Every year a tree, when alive, creates a ring, so it is possible to date how old a tree is by counting the rings. But it doesn't stop there, trees also create rings of various thicknesses depending on wet vs dry years, so they are able to provide a local climate report for each year it was alive. You can use the different thicknesses to then compare modern trees to older cut down logs and slowly piece together a timeline for a specific region. Using this technique, scientists were then able to date the buildings based on when the tree was chopped down. 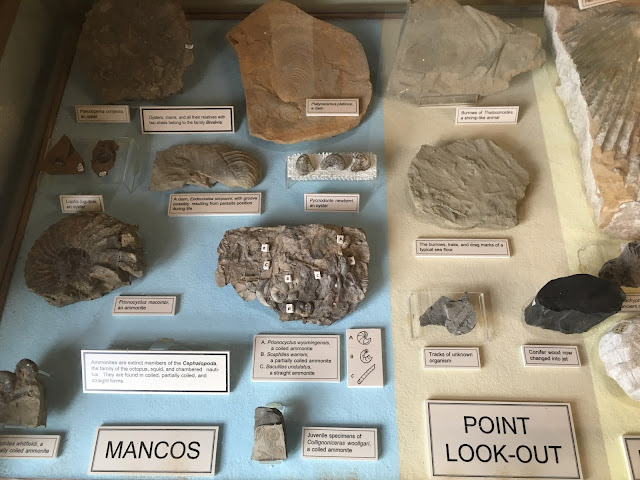 Within the archaeology museum there is a nice display of the various fossils found throughout the park within each rock unit. Here are the Mancos Shale and Point Lookout Sandstone fossils. 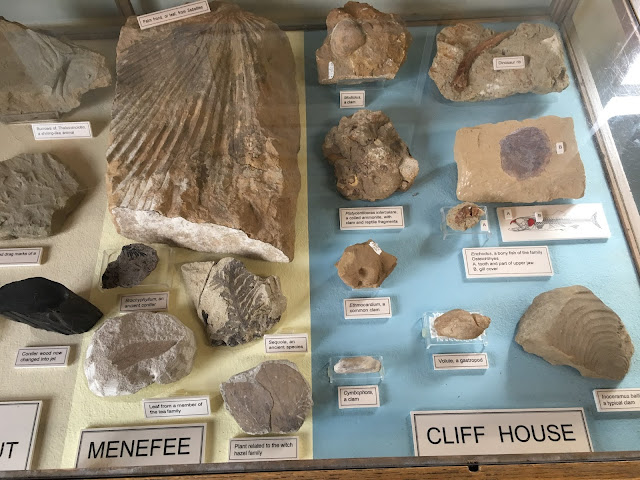 And here are the fossils from the Menefee Formation and the Cliff House Sandstone.