While playing with my daughter at a local park, I came across this hidden dinosaur, that brought up a couple of questions in mind. First off, what was this model based on? And why was the dinosaur positioned the way it was? I had my thoughts based on previous research I had done but I figured I would delve into it deeper. 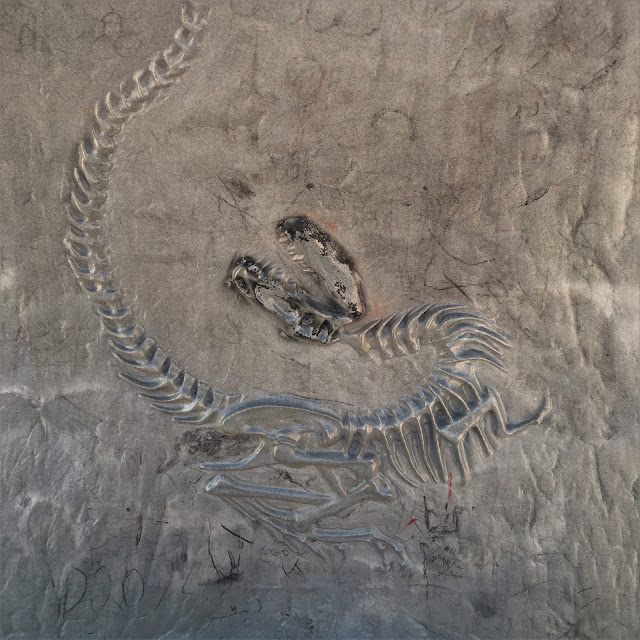 The dinosaur in question could be found on the back side of this rock climbing wall. 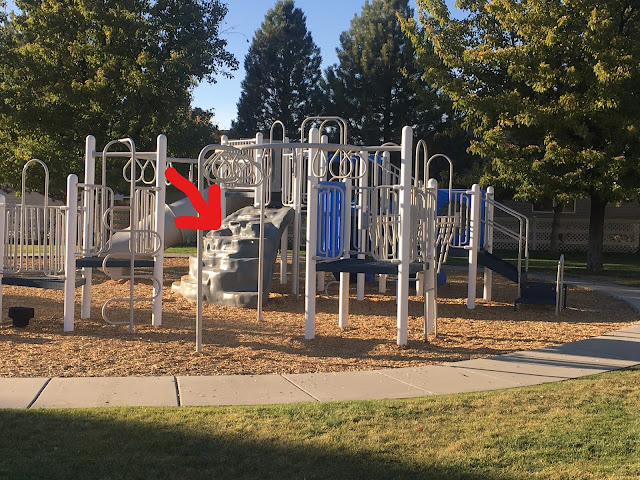 To answer the first question, the mold appears to be modeled on the Gorgosaurus specimen at the Royal Tyrell Museum in Alberta, Canada. Gorgosaurus is a tyrannosaurid that is most closely related to Albertosaurus (hence the original identification of the below fossil as an Albertosaurus). It lived during the Late Cretaceous time period between 76.6 and 75.1 million years ago in Alberta, Canada and potentially Montana, USA.
The first thing that is noticeable about the playground mold is that it is not an exact match for the museum specimen though. The mold skull is far smaller, the neck has many fewer vertebrae, and the curve of the neck isn't as pronounced, among a host of other issues. But the general feel of the playground dino is the same as the actual fossil. The location of the limb bones is near exact as well as the general posture of the dinosaur. It's as if someone tried to create a simplified image of the real dinosaur to the point of being wrong but "close enough".
Death Pose
Another noticeable thing about the dinosaur (in both cases), is the position of the body. This position is frequently referred to as the "death pose" (technically called the "opisthotonic posture"), and this is far from the only fossil to be found in a similar situation. Typically, what you see with this posture is that the head is curled backwards towards the tail and the tail is curled forward (as much as possible) towards the head. But why are so many fossils found this way?
Upon initial discovery, it was thought that the animals lived like this while they were alive. However, that has proven to be false, so something must of happened to their bodies between the time that they were healthy and alive to the time that they were locked in stone (i.e. fossilized) forever. There are a couple of theories on what can cause this body position, but they can be boiled down to two:
Scientists have been debating this for decades but it likely comes down to both sides are potentially correct. There are things that can cause the animal to be posed like this during life and after death.
In life, this posture is possible by severe neurological (brain) damage, which would result in a curved spine while pulling the head and heels backwards. This situation can be produced by multiple causes including meningitis, tetanus, poisoning, asphyxiation, as well as a host of other diseases. While these causes have most notably been recorded in humans, animals are not immune from them either, specifically brain damage from drowning or asphyxiation and/or poisoning. These are instances where the "death throes" that produce this posture could be created in life, or more accurately called "perimortem", or near death.
There is also research that shows this posture can be created after death (postmortem). The bend of the spine is most naturally backwards. In most animals bending the neck downwards takes a lot of force, while upwards is quite natural.  But after death, although the muscles initially relax, ligaments and tendons start to contract, forcing the spine around as they shrink. Desiccation of the corpse has also been attributed as a cause of post-mortem spinal curve.
As a side note: The tail on a dinosaur does not typically curl backwards as it does in mammals. You can actually see this in the Gorgosaurus fossil above, where the tail, even though it is bent upwards, does not actually curve towards the end. Dinosaurs have vertically stiff tails that stick out to counterbalance their heads. This stiff tail is not capable of bending up or down, but can sway side to side. This stiffness is preserved in death.
References
https://paleontologyworld.com/dinosaurs-%E2%80%93-species-encycolpedia/gorgosaurus
https://tyrrellmuseum.com/whats_on/exhibits/foundations
https://www.medicalnewstoday.com/articles/318868#what-is-opisthotonos
https://bioone.org/journals/paleobiology/volume-33/issue-2/06015.1/The-opisthotonic-posture-of-vertebrate-skeletons--postmortem-contraction-or/10.1666/06015.1.short
https://link.springer.com/article/10.1007/s12549-011-0068-y
at October 26, 2020