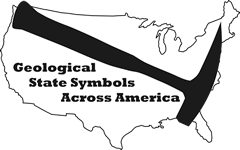 Garnet is typically thought of as one specific mineral, however garnet is actually a series of very similar minerals. This mineral series varies in chemical composition, resulting in different mineral names, however the chemical composition of all of the garnets share a generalized chemical composition: X3Y2(SiO4)3, where "X" can be Ca, Mg, Fe2+, or Mn2+, and "Y" can be Al, Fe3+, Mn3+, V3+, or Cr3+. Along with the different chemical compositions, there are different colors and hardnesses associated with each one as well. Crystals of garnet typically form in 12-sided "balls", that can be easy to identify within the rocks that they are found in. The name "garnet" comes from the Latin, "granatus" meaning "like a grain" because of this ball-crystal habit. Garnet is formed from the metamorphism of shale minerals, and can be found in most foliated metamorphic rocks such as schist and gneiss. Garnets can also be found in some igneous rocks including granites and granitic pegmatites. Garnet has been used as a gemstone since ancient Egypt, however recently garnet has obtained significant usage as an abrasive. Since garnet is a rather hard mineral and has no cleavage, it typically breaks into sharp edged fragments, and therefore produces a good grit for water-jet cutting or sandblasting. Garnet is a very common mineral and even high grade gemstone quality specimens can be fairly cheap.

The Star Garnets are a rare variety of garnet which contain an "asterism", which is the star effect across the surface of the gem. This feature is more commonly seen in sapphires and rubys as well as other minerals. The star effect is caused by the inclusion of the mineral rutile within the garnet crystal. Star garnets are typically a deep brownish-red or reddish-black, producing almost a purplish hue. After careful polishing, the alignment of the rutile produces a reflection of light that produces a 3-dimensional star light pattern. The most common stars are the 4-rayed star (as pictured), however a 6-rayed star is possible, although very rare. The Star Garnet has most commonly been found in India and Idaho, however small amounts have also been found in Russia, Brazil, and North Carolina. Within Idaho, Star Garnets are found in the northern parts of the state near St. Maries, an area known as the Emerald Creek Garnet Area. The public is allowed to collect here for a small permit fee.

67-4507. STATE FOSSIL DESIGNATED. The Hagerman Horse Fossil (species Equus simplicidens originally described as Plesippus shoshonensis) is hereby designated and declared to be the state fossil of the state of Idaho.

Horses are one of the modern day species that has a remarkable fossil history. One of the earliest known relatives to modern day horses is the species Hyracotherium, more commonly known as eohippus or the "Dawn Horse" (although there is some scientific debate about whether Hyracotherium and Eohippus are two distinct species are just different examples of the same species). Hyracotherium lived around 55 million years ago and was about the size of a modern dog, much smaller than modern day horses. Evolutionarily, horses are within the order Perissodactyla, which are the odd-toes ungulates. This means that horses and their relatives, tapirs and rhinoceroses, typically have one or three toes. Hyracotherium was initially adapted for tropical forests, however as the landscape slowly dried and cooled over time, new horse species evolved to be adapted for the dryer, prairie habitat. With the development of the prairies approximately 20 million years ago, the new horse species had evolved larger and more adapted for grazing. Over the last 55 million years, over 50 species of horses evolved, with lineages often branching and living coevally, however the only horse genus left alive today is Equus, which includes not only horses but zebras and donkeys as well.

Among the myriad of horse species that have evolved was the species known as the Hagerman horse, Equus simplicidens. The Hagerman horse, first named in 1892 by Edward Drinker Cope, is the oldest known species of Equus. Equus simplicidens lived during the Ice Age, specifically the Pliocene and Pleistocene epochs, approximately 1.8 to 3.5 million years ago. Despite the name, the Hagerman horse is actually closely related to a modern day zebra, Grevy's Zebra (Equus grevyi). It is known from fossils all over North America, however the densest concentration of fossils is in Idaho where over 200 individuals had been found at Hagerman Fossil Beds National Monument. The fossil beds are comprised of two distinct bone beds, one of which was thought to be a periodically dried up river. There is some debate about how the horses died, but one theory is that the horses came here to drink, but upon finding the water not there died of thirst. Seasonal rains then came in, swept the horses up, and piled them upon a riverbank, where they were then covered over with sediment and eventually fossilized. Another theory is that the horses were killed during a flood while trying to cross the river. However, because so many of the horses were found within one location, it has helped scientists to determine that these horses were likely herd animals.