My next series of posts about the Geology of the National Parks Through Pictures is for a set a parks we hit up while visiting the Big Island of Hawaii at the end of March in 2018. We were able to visit all four parks across the big island. Many of them are going to have similar geological features, since they are all located on the same volcanic island, so we will start with the big one.

Since Kilauea is a VERY active volcano, there are going to be volcanic features found within the surrounding landscape. Our first volcanic feature we found upon entering the park are the Steam Vents near the visitor's center. Here is an overview shot of the line of vents that you can actually walk up to. 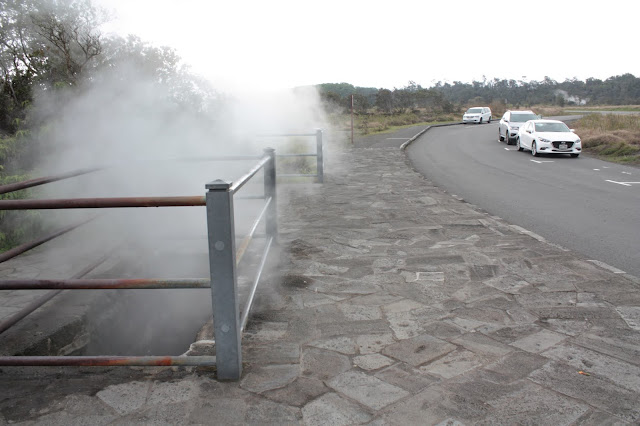 This is a close up shot of a couple of steam vents adjacent to the road. What happens is that groundwater is moving through the ground, and as it comes into contact with the magma is heated up and creates steam. The steam follow cracks within the rocks, which are fairly stable over time, hence the reason they are able to create fences around the vents. However an earthquake could easily shift the direction of the cracks, should it be large enough, altering where the steam is vented out of the rocks.

As you drive up towards the main vent of Kilauea, you come across an overlook, looking down into the Kilauea Caldera. A caldera is a volcanic feature that is kind of like a bowl. As the magma within the volcano erupts, the magma chamber ends up being an empty space within the ground. Frequently this empty space will collapse down upon itself, creating an indented area known as the caldera. The caldera forms around the primary vent or crater, which is the area where the magma leaves the magma chamber to the surface. Once magma erupts onto the surface, it is then considered lava. In the image above you can make out the main Kilauea crater within the caldera on the right (west) side. This main crater is known as the Halema'uma'u Crater. 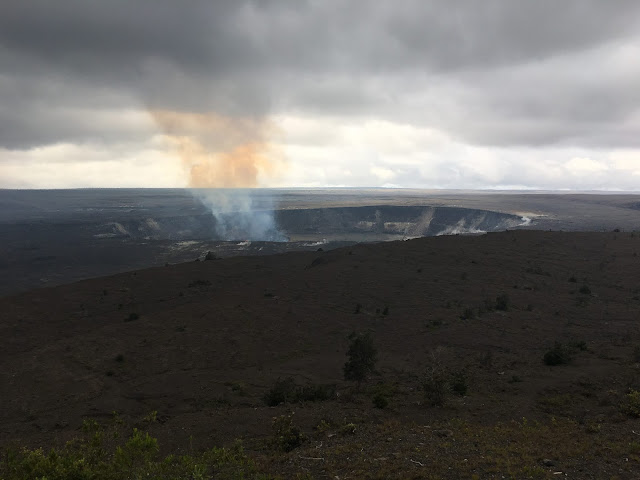 Here is a zoomed in view of the Halema'uma'u Crater. You can see the steam rising up off of the actively erupting lava. Even though Kilauea was actively erupting here, there was not enough of an eruption to flow outside of the crater. This eventually changed when a couple of weeks after our visit Kilauea started to have massive eruptions further to the southeast. 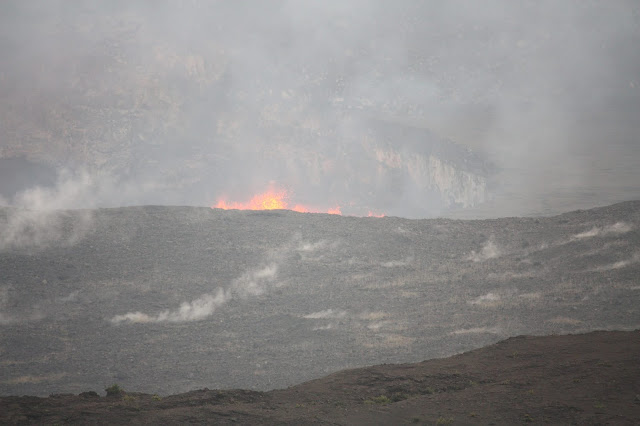 Even though the Crater Rim Drive was closed, we could still get a pretty good view of the lava erupting out of Halema'uma'u Crater from the overlook. 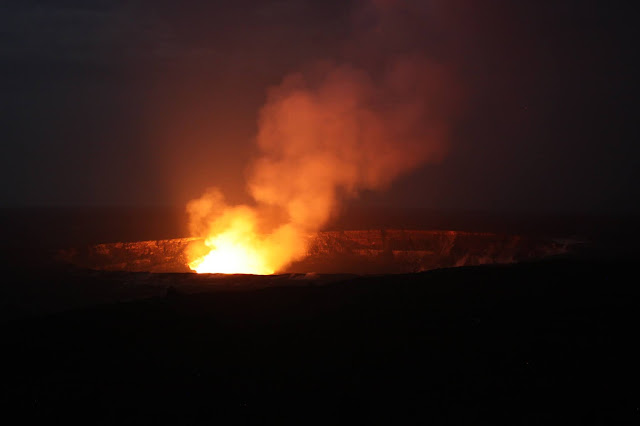 We were at the park for so long, we were able to circle back to Halema'uma'u Crater and get this absolutely awesome shot of the crater all lit up by the lava at night. 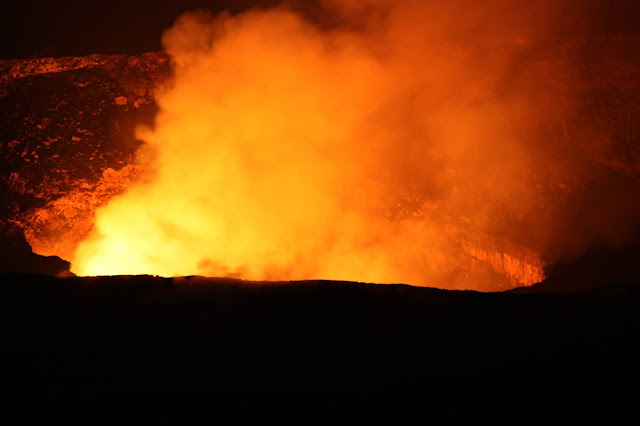 Here is a zoomed in view of the night eruption. The amount of light given off shows how much of the lava that is present but we couldn't see from our vantage point on the edge of the caldera. 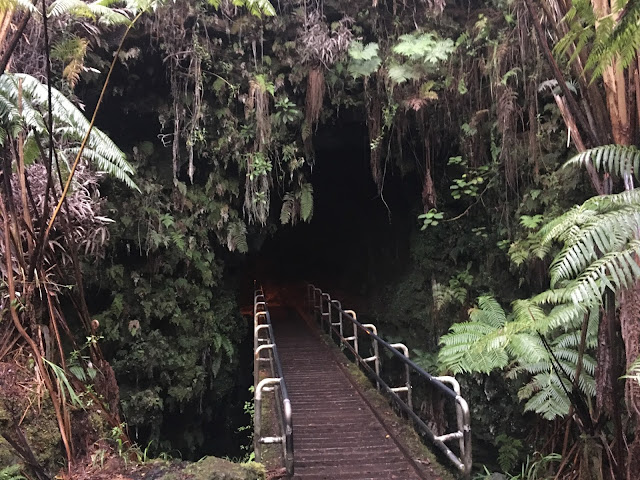 Despite Halema'uma'u Crater being the most awesomest thing ever and me never wanting to leave, there are tons of other features that we wanted to visit within the park. The hike we were able to do was for the Thurston Lava Tube. The entrance to the lava tube is pictured above. There are multiple types of lava flows and volcanoes depending mainly on the silica (quartz) content of the lava/magma. Kilauea is known as a shield volcano because the lava/magma that makes up the volcano is basaltic, meaning that it has a very low silica content. Silica makes a lava viscous, so this low silica lava is very thin and runny (low viscosity). It is also very dark in color due to the mineral makeup of the lava which generally has darker minerals and less lighter minerals (like quartz). A shield volcano is created when low viscosity lava continually erupts creating a volcano with a very low curve, like a shield. Although not pointed like a stereotypical volcano, shield volcanoes are among the largest volcanoes on earth. Mauna Kea, another of the six volcanoes on the Big Island, is considered the tallest mountain on Earth, when measure from the base of the mountain (which in this instance is below water). 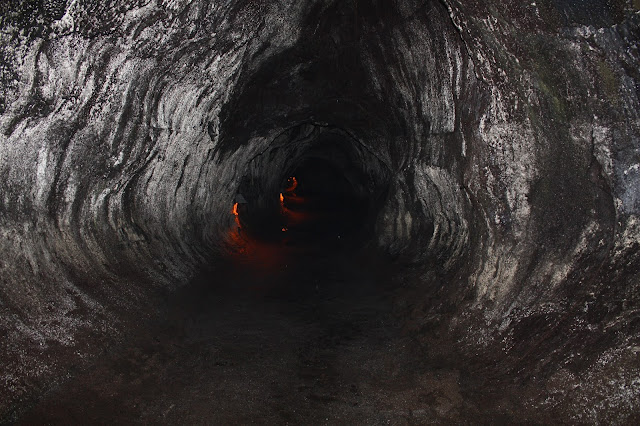 Above is a shot from within the lava tube. A lava tube forms when a stream of lava erupts from a volcano, typically only possible with the thinner, runny basaltic lavas, and as the stream is running the air cools and solidifies the surface of the stream. As the stream crusts over, the lava within the stream keeps running, as if through a pipe now. Eventually the lava will stop when the eruption stops and will flow out of the tube to solidify further downstream, leaving behind a lava tube. 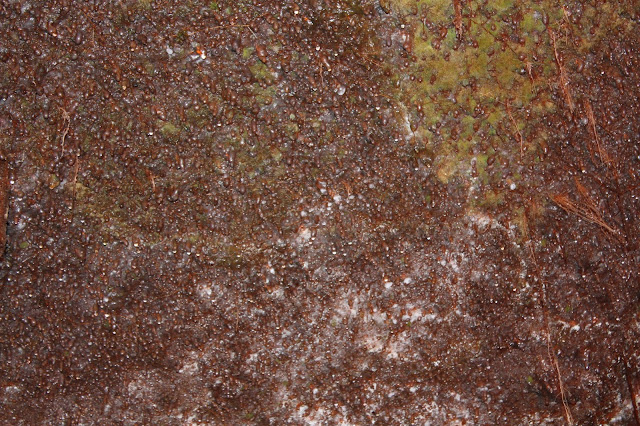 Here is a closeup view of the walls of the lava tube. Unlike limestone caves, a lava tube generally has nice smooth surfaces and lacks most of the ornamental features of a limestone cave like stalactites and stalagmites.

Chain of Craters Road within the national park heads right to the shore, with stops along the way at a bunch of different volcanic features. Here is Pauahi Crater on the road. The three most recent eruptions at this crater were in May of 1973, November of 1973, and November of 1979.

The road then crosses the 1969 Mauna Ulu eruption. There are two main types of basaltic lava flows based on how the lava erupts and the resulting solidified lava. The first type, and the one that is seen in the picture below and in the forefront of the image above, is pahoehoe lava. This lava ends up looks like ropey bands of smooth basaltic rocks once it is solidified. The other type of basaltic lava flow is a'a (pronounced "ah ah"). This basaltic lava flow is full of sharp, blocky pieces. It was literally named for the noise people made walking across it barefoot. 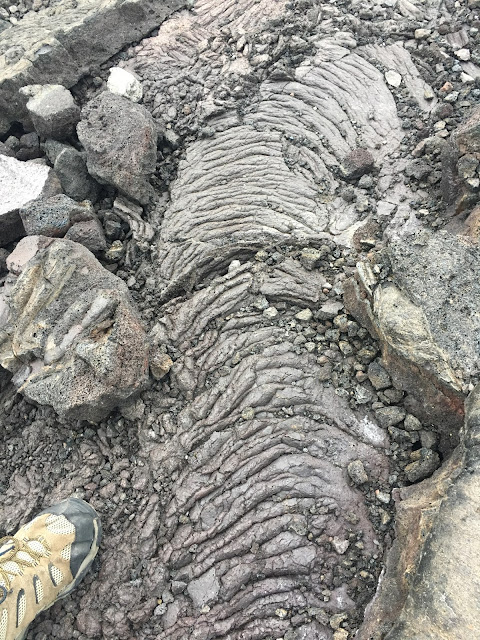 A close up view of some of the pahoehoe lava flows.

Another view of the 1969 Mauna Ulu lava flow. This time facing the ocean to the south. 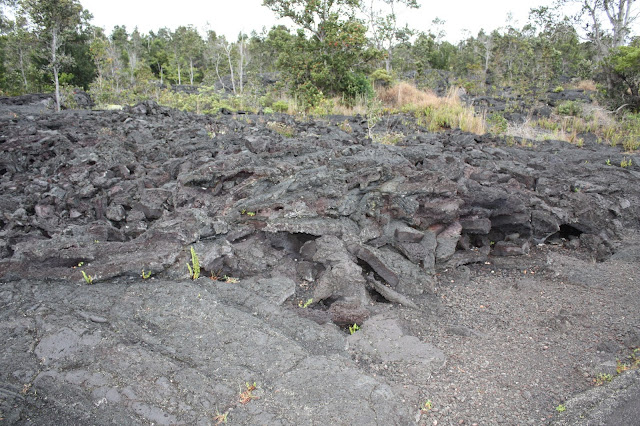 As the lava flows get older and start to break down, it becomes rather crumbly. Here you can see the remains of some smaller lava tubes as they collapsed down from time and erosion. 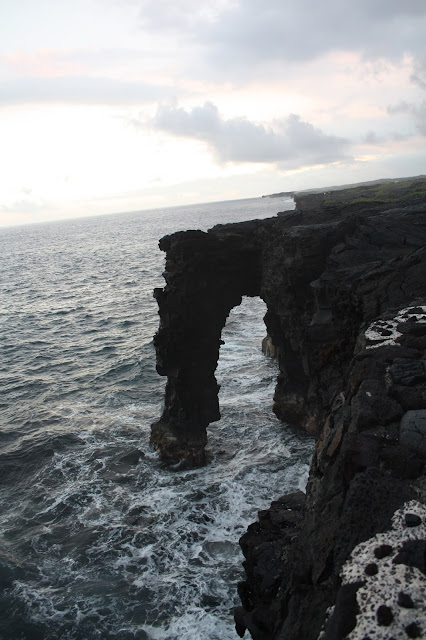 Once you get down to the seashore you can a 550 year old lava flow wave cut by the ocean. Within the lava flow is a structure known as the Hōlei Sea Arch. The arch was carved out because of differing hardnesses of the lava created differential erosion, where some layers were softer and eroded faster than other layers. 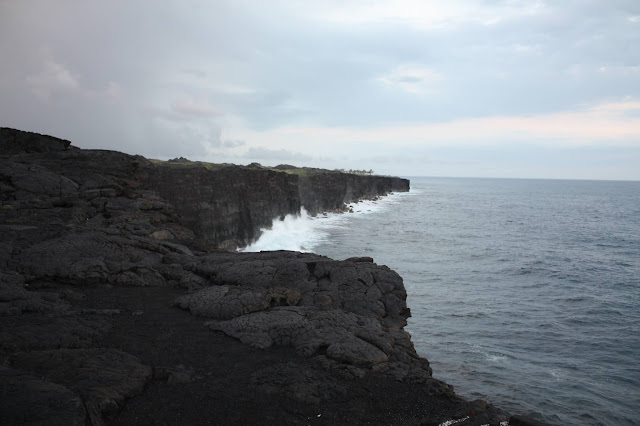 From the overlook, here is looking in the opposite direction with the Hōlei Sea Arch to our backs. Again you can see the wave cut action of the Pacific Ocean eroding away the 550 year old lava flow. 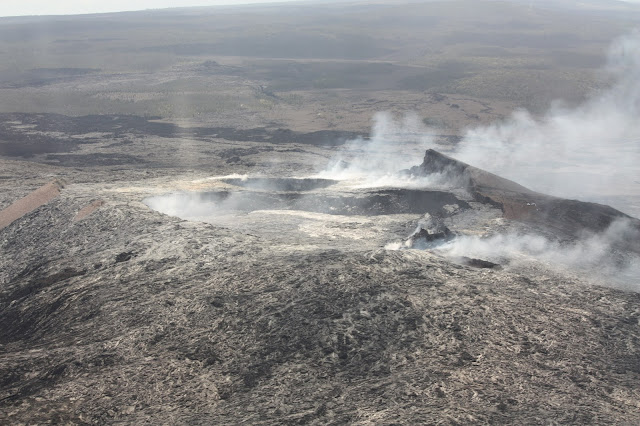 While we were in Hawaii, my mother gifted me a helicopter tour of the volcanoes through Blue Hawaiian Helicopter Tours. During the tour I was able to get a fantastic look inside one of the active craters. This time it was Pu‘U ‘Ō‘Ō crater, which ranks as the longest and most voluminous know outpouring of lava from Kilauea Volcano's East Rift Zone in more than 500 years. 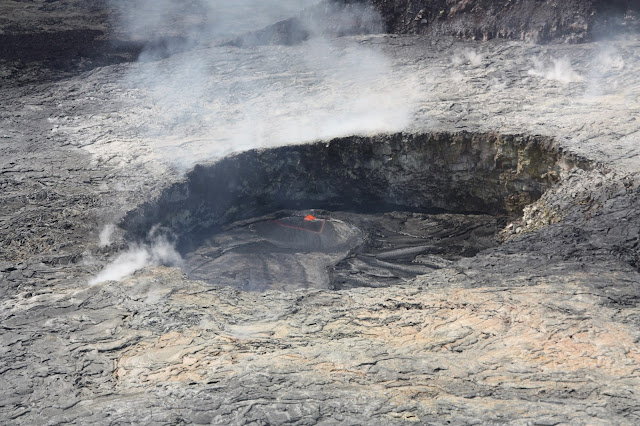 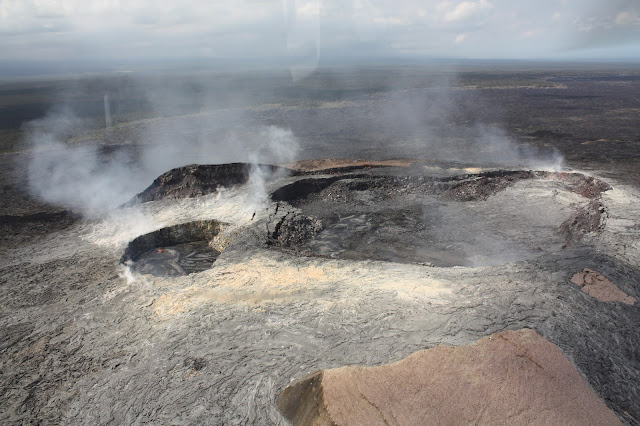 Zoomed out shot of Pu‘U ‘Ō‘Ō crater. The active lava crater is the one on the left side of the image above.
at October 14, 2020