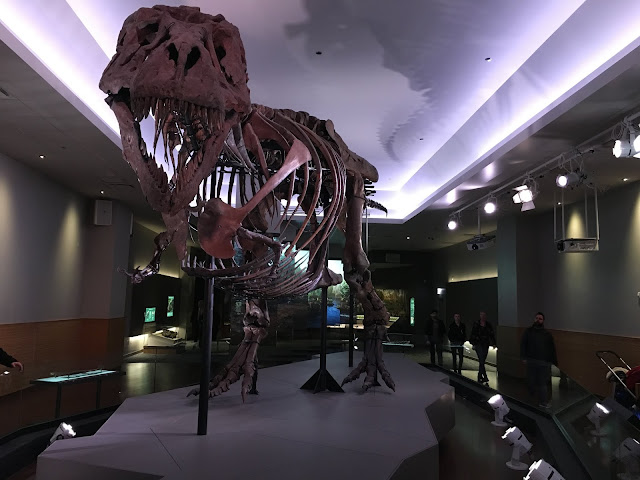 I don't know if all paleontologists have this, but I know I certainly do: a Paleo Bucket List. A list of fossils, localities, or rock units that are so famous and revolutionary to the field of paleontology, geology, and/or biology that one must gaze upon them just once to full appreciate them. I was finally able to hit up one of my bucket list items when I was in Chicago in 2016, and then again to see the updated mount in 2019:

SUE (AKA FMNH PR 2081) is a difficult fossil to sum up quickly because so much has happened to her since she was discovered. And that's one of the reasons she has become a bucket list item, for her storied history.

SUE the T. rex was initially discovered by Sue Henderson, and named after her. After excavation, the fossil was determined to be 90% complete, far more complete than any other T. rex at the time and is still one of the most complete fossil T. rexes ever discovered. SUE was contentious because of where she was discovered and who owned the land that she was discovered on. In short, the Black Hills Institute (BHI) in South Dakota, of which Sue Hendrickson was a part of, discovered the T. rex on a ranch on the Cheyenne River Sioux reservation. A dispute erupted over the ownership of the fossil between the BHI, the rancher Maurice Williams, and the Cheyenne River Sioux tribe.
This prompted the federal government to step in and claimed the fossil. Eventually, it was determined that the land under which the fossil was found on was tribal land, held in trust by the US Government. So the land owner, Maurice Williams, ended up with the fossil, under trust from the US Government. Williams was then granted leave by the US Government to sell the fossil through auction. The fossil was shipped to Sotheby's in NY and sold in 1997 for $8.36 million. The purchasing winner was the Chicago Field Museum with significant funding from the Walt Disney Company and McDonalds. SUE remains the most expensive fossil ever sold to this day. There have been several books, journal articles, and documentaries about the controversy surrounding SUE. Dinosaur 13 was one of the more popular recent documentaries from 2014, although after watching it, I had a sour taste in my mouth from the blatant bias against the US government.
So, coming back to SUE. Back in August of 2016 when I visited the Field Museum, she was housed in the main Stanley Field Hall of the Field Museum. In this shot below you can see the reconstruction painting of SUE in the background up on the balcony. SUE's original skull was originally housed just below the painting.

Then in 2018, SUE got a new home within the museum. She now has her own special exhibit. I was able to visit the new home in April of 2019.

SUE was discovered within the Hell Creek Formation and has been dated to being about 67 million years old. This makes her one of the last dinosaurs of the Mesozoic. She is 40.5 feet and 13 feet tall, has been determined to be ~28 years old when she died, and is estimated to have weighed around 9 tons. Besides being nearly complete, one of the really cool things about SUE is the entire reconstruction of the skull. When discovered and pieced back together, the skull of SUE was essentially squished (all of which happened after death and burial). The skull itself also weighs over 600 pounds, so a reconstruction was needed in order to just display the skull. Luckily the original skull is also displayed nearby in the current exhibit as well.

There is also, to my immense delight, a SUE store!
In exchange for putting up the cash to buy SUE, McDonalds and the Walt Disney Corporation both received models of SUE. You can see Disney's SUE model, down in Animal Kingdom at Walt Disney World.