We opted to do one of the Red Bus tours in order to get the full Glacier NP experience and it was the best idea ever. Not only didn't I have to worry about driving in traffic but the busses were great and we could just sit back and enjoy the scenery. We did the Big Sky Circle Tour, which is the most inclusive tour of the park, driving around the entire park then through the middle from west to east, up the world famous Going-to-the-Sun Road. One of the first stops on the tour was this geological mountain view along the southern edge of the park. Here you can see the Little Dog Mountain (the left peak) and Summit Mountain (the right peak) as well as the Lewis Overthrust Fault through the middle of the mountain which is a low angle fault. It runs left to right at about the elevation where the green vegetation stops. This thrust fault ended up placing the rocks "out of order". Normally when rocks are deposited the oldest is on the bottom and the youngest is on top. However here, the rocks on top are Precambrian in age (~1,600 to 800 million years old), and are mostly sedimentary rocks with a few igneous intrusions.  These older Precambrian rocks were thrusted ~65-70 million years ago on top of the much younger Cretaceous age rocks (~70 to 100 million years old). The Cretaceous rocks are mainly comprised of shales from a marine environment. Most of the rocks within the park are the much older Precambrian rocks.

After driving around the southern edge of the park we stopped at one of the major lakes on the trip, Lake McDonald. Here is a view of the lake from the southernmost extent. Lake McDonald is a moraine dammed lake, where a previous glacier estimated to have been 2,000 feet thick came through and eroded down the valley. Afterwards, at the foot of the glacier a moraine was built. This is a feature where the glacier acts like a conveyor belt, transporting sediment along in the ice and at the end where the glacier is melting deposits all of that eroded material (called till) into this giant pile of debris. In this case the giant pile of debris, aka the moraine, was deposited right on top of McDonald Creek, allowing the water to build up behind it in the already carved out lake. 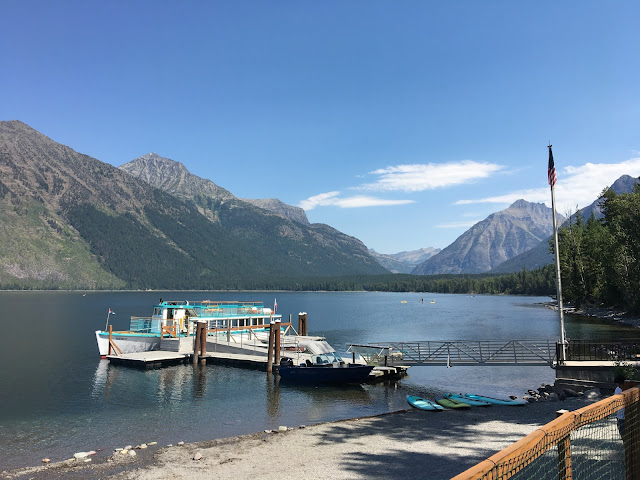 We continued along the road, stopping at the Lake McDonald Lodge for lunch. Here is a view from the boat dock outside the lodge looking north at the mountains. As glaciers grind down the landscape, it pick up rocks that get embedded within the ice. These are dragged along beneath the glacier and help to erode the ground over which the glacier rides. Eventually all of the loose soil and other material is carried away and the glaciers start to grind down the bedrock. This grinding action produces powdered rock known as glacial flour. The glacial flower will then become suspended within the lakes producing the famous turquoise color that glacial lakes are so well known for. 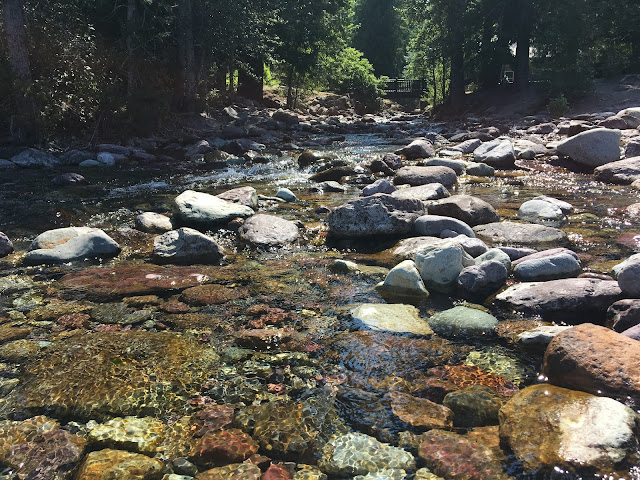 When you look at glacial till it is characterized of containing a wide range of grain sizes. Glaciers don't care what rocks they carry so moraines will have a mishmash of anything from sand and clay up to boulders the size of houses. They also pick up rocks from wherever the glacier starts from and can transport it many hundreds of miles away, all depending on the size and length of the glacier. Afterwards, water action starts to sort out the rocks, transporting the smaller fragments away while leaving behind the larger boulders and cobbles. Here we can see the cobbles and boulders left behind along Snyder Creek that flows into Lake McDonald. When submerged you can see the beautiful array of colors from all the various rocks that had been brought to this place. 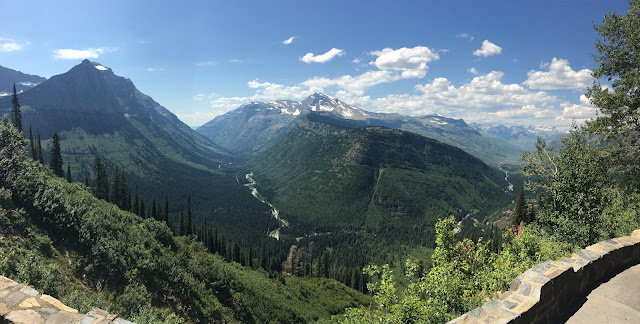 After traveling up McDonald creek, the Going-to-the-Sun Road really lives up to it's name as we then drive upwards along the edge of the glacial valley, called the Garden Wall, until we emerge at the top rim at Logan Pass. When a valley is eroded by a river or a stream it is constantly eroded by the water at the lowest part of the valley where the water is cutting into the ground. This forms a "V" shaped valley. However, when a glacier then comes into the valley, the ice of the glacier often fills the valley. This means that the glacier will then erode in all directions carving out a smoother walled valley in the shape of a "U". Here I am looking back down across the McDonald Creek valley towards where we came from to the west. You can see a textbook example of the U-shaped valley. McDonald Creek comes from the north before making this turn to the west. You can see the upstream portion of McDonald creek in the right of the photo. The Going-to-the-Sun Road follows McDonald Creek then turns to travel up the Logan Creek valley at that bend in the McDonald Creek. 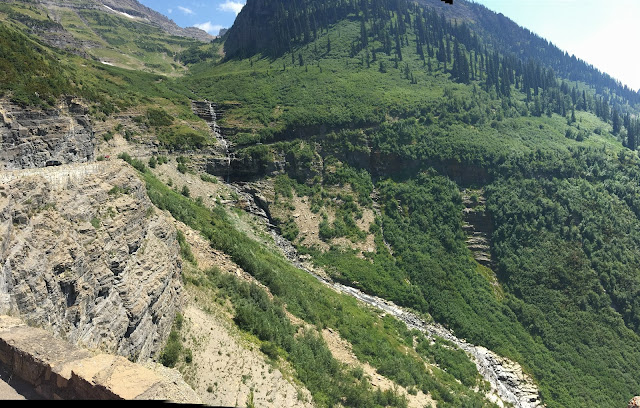 As we traveled up the rim of the valley along the Going-to-the-Sun Road, not only could we see over the valley that we were leaving behind but also the walls of the valley had many geological wonders. Since glaciers fill up the valleys, they don't erode the valleys in the same logical pattern that rivers would. Sometimes deeper valleys are cut where larger glacier are and are intercepted by much smaller glaciers. When these glaciers melt away the much smaller glacier wouldn't have cut nearly as deep as the larger glacier leaving what is called a "hanging valley" where the streams exiting out of the hanging valley would often form some sort of waterfall. Here is the Weeping Wall, coming down off the aptly named Garden Wall of Logan Creek valley. The rocks that the stream are traveling down is known as the Siyeh Limestone, a 1.1 billion year old (Proterozoic) limestone rich with early fossils such as stromatolites (algal mounds from a tidal environment). 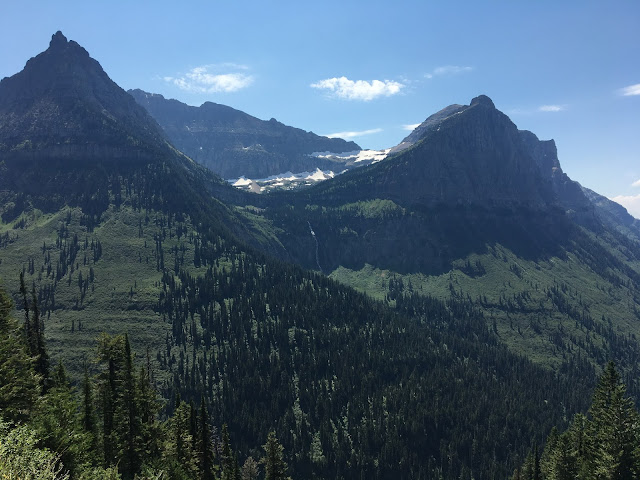 View of the nearby Mount Oberlin from the Going-to-the-Sun Road. You can see the remnants of the glaciers up among the peaks, however as far as I am aware these are not active glaciers but snowfields. A snowfield remains during the entire year, while a glacier is a snowfield that slowly compacts into ice and eventually flows down the side of the mountain. As a glacier melts away, this process happens in reverse, where the glacier eventually turns into a snowfield. 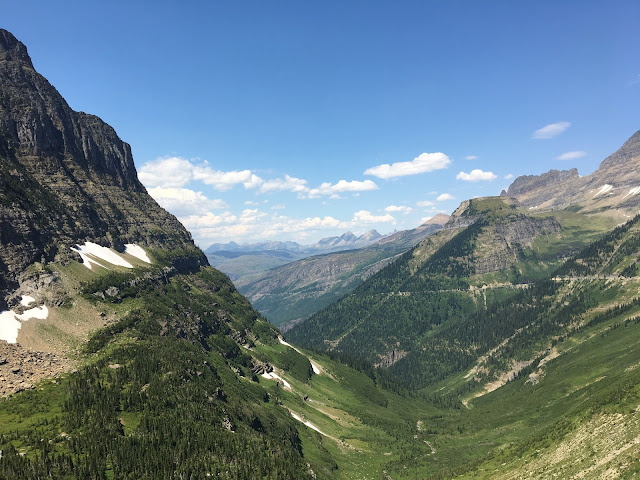 Here is a view from near the top of Logan Creek looking west down the upper Logan Creek U-shaped valley. 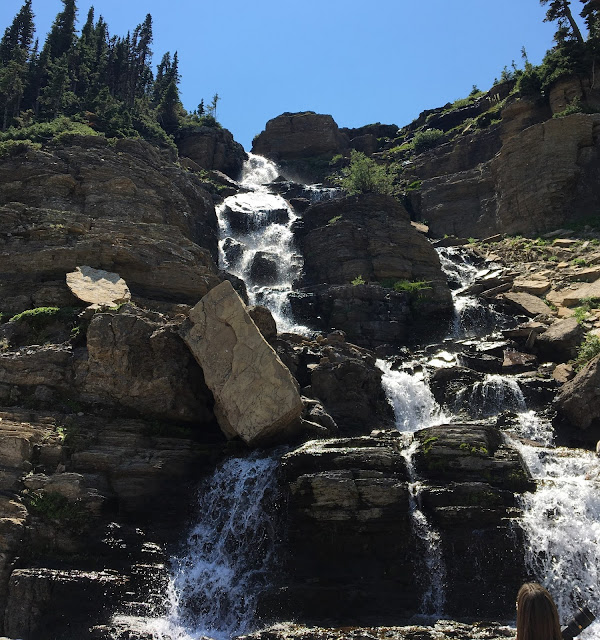 Here is the upper part of Oberlin Falls, aka Bird Woman Falls, which is part of the upper reaches of Logan Creek, falling down the Proterozoic Siyeh Limestone. These falls come from Oberlin Mountain up over the edge here, fall down this cliff face from the hanging valley, then continue on as seen in the picture above in the Logan Creek valley.

View of Reynolds Mountain in the distance at the Hidden Lake Nature Trail at the summit of the Going-to-the-Sun Road at Logan Pass. 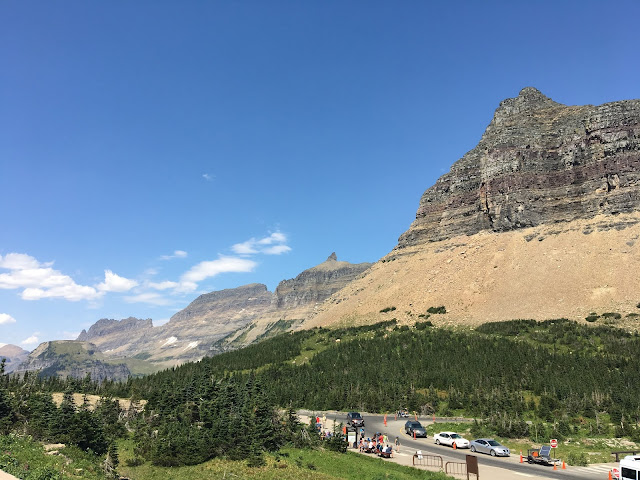 A view back towards the Garden Wall at its peak from Logan Pass. More of the Siyah Limestone is represented here. 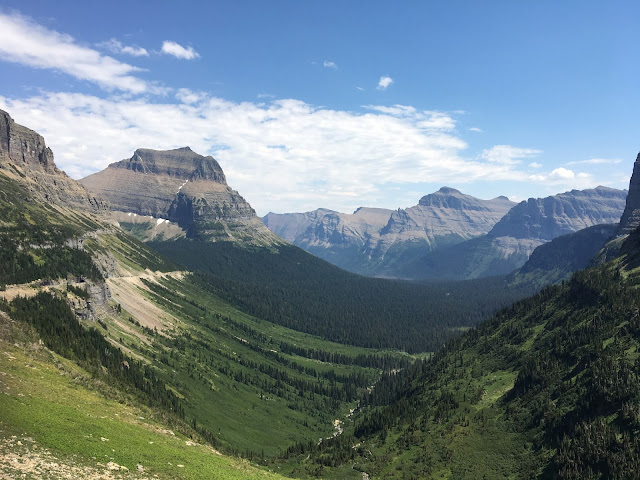 After coming over Logan Pass we are back to descending through the park towards the east. Here is another textbook U-shaped valley, the Reynolds Creek valley. Most of the rocks are still the Siyeh Limestone. The Going-to-the-Sun Mountain, the namesake of the road, is the peak standing out on the left side of the photo.  A dark band is noticeable across the upper part of the mountain, as well as across the valley. This dark band is an igneous rock known as a sill. A sill is when some magma squeezes itself between horizontal beds of rocks. This means that it ends up being younger then the surrounding rocks. This black band of rock is known as the Purcell Sill and is a diorite that is ~100 feet thick. The input of the magma 750 million years ago into the Siyeh Limestone caused the limestone immediately surrounding the sill to melt and form a thin rind of marble. 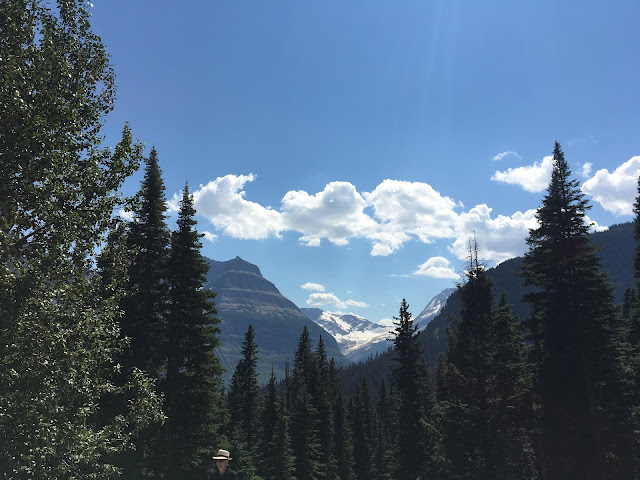 One of the few glaciers still currently visible from the Going-to-the-Sun Road, Jackson Glacier. Within the park there were ~80 glaciers within the current park confines in 1850. That has since drastically decreased to 35 in 1966, and then down to the current number of 26 as of 2015, the last year with satellite imagery available. 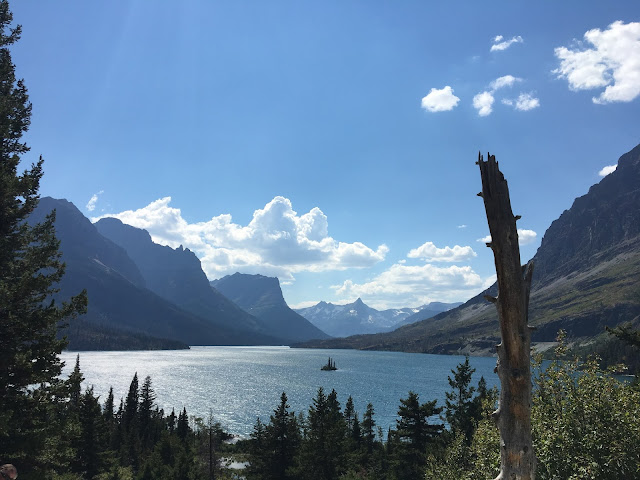 Coming down off the mountains on the eastern side of the park is Saint Mary Lake, another moraine dammed lake formed from a glacier carving out a valley and being dammed at the end by the glacial debris moraine. 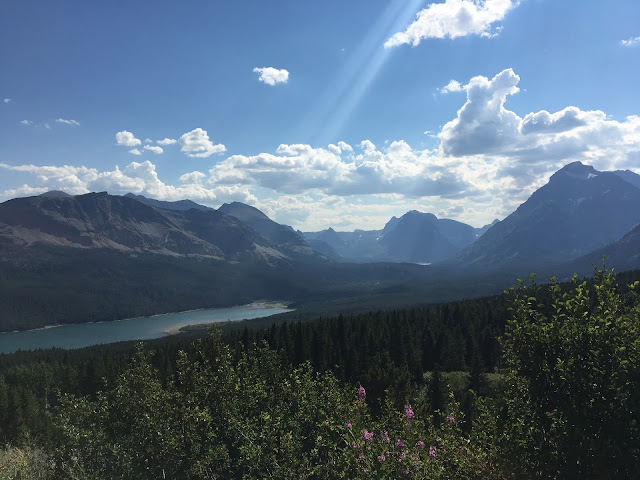 Continuing our trip back towards our starting point we come to the overlook for Lower Two Medicine Lake, another glacial moraine dammed lake.

And the final stop along the way was as Two Medicine Lake, also a glacial moraine dammed lake. 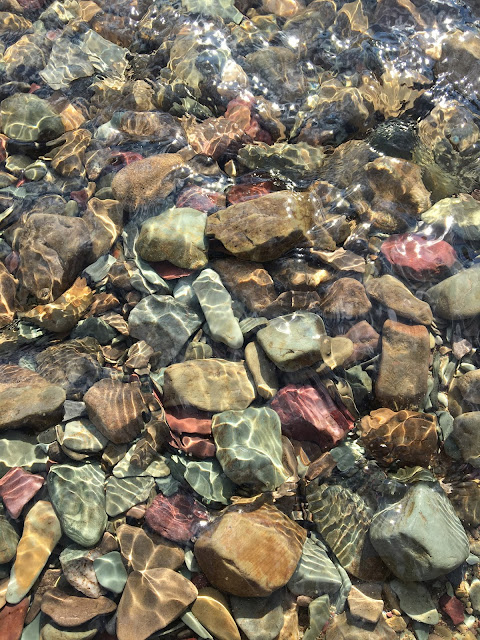 The rocks within Two Medicine Lake are much like the ones in McDonald lake, leaving these absolutely gorgeous array of colors when they are wet.
References
https://pubs.usgs.gov/pp/0294k/report.pdf
https://www.sciencedirect.com/science/article/abs/pii/0301926876900164
https://scenicusa.net/081406.html
https://www.glaciernationalparklodges.com/red-bus-tours/east-side-tours/
https://www.nps.gov/parkhistory/online_books/glac/3/sec4.htm
https://www.nps.gov/glac/learn/nature/geologicformations.htm
at November 11, 2020