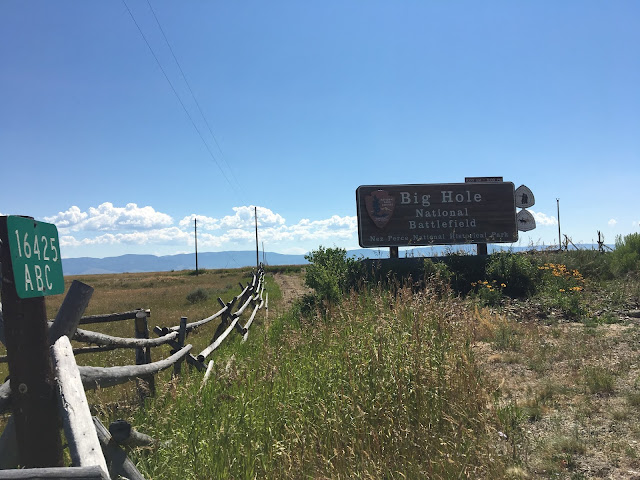 Our entrance sign shot. Big Hole National Battlefield sits in the aptly named Big Hole Valley, named because this is the largest valley in the region. Big Hole National Battlefield is set up to remember the ambush and essentially a massacre of the Nez Perce as they were fleeing away from the US Military during what is called the Flight of 1877. The Nez Perce were subsequently ambushed here by the US military and many of them were killed during the resulting battle.

On a geological note, the Big Hole Valley sits in a very similar position as the Grant-Kohrs Ranch NHS a little to the northeast. As can be seen on the map below, on the west sits the Anaconda Range and the Anaconda Detachment Fault. These mountains are composed of Proterozoic, Paleozoic, and Mesozoic sedimentary rocks intruded by Cretaceous and Eocene intrusive and extrusive (volcanic) igneous rocks. To the east sits the Pioneer Range, composed of the Pioneer Batholith (PB on the map below). The Pioneer Batholith is very similar to the larger nearby Boulder Batholith, being emplaced ~70 million years ago during the Late Cretaceous. The batholith was formed from magma that intruded into the area during the mountain building that resulted from the compression of the North American plate by the Farallon Plate off the west coast of the US squeezing the western portion of North America (called the Laramide Orogeny). One of the largest plutons (a smaller body of rock formed from magma within the batholith) within the Pioneer Batholith is the Late Cretaceous age Uphill Creek Granodiorite, which covers much of the Pioneer Range.
The valley was formed from similar circumstances as the Basin and Range province to the southwest of here. Following the almost complete subduction of the Farallon Plate off the west coast of the US, the compressional forces on North America were mostly relieved, allowing for the North American plate to expand outwards like a compressed sponge slowly allowed to expand. This expansion process was most noticeable in the Basin and Range province where there are linear mountain ranges alternating with valleys. While most of the extensional activity was fairly recent in the Basin and Range province, extensional along the Anaconda Detachment Fault was much older, taking place from 53 to 39 million years ago.
This extensional activity forced the Big Hole Valley floor downwards, while the adjacent mountain ranges moved upwards (in relation). After the extensional activity, there was several volcanic episodes that layered the newly created valley floor with volcanic rocks. Afterwards, erosion of the surrounding mountains started to fill the valley with sand, mud, and gravel. It has been determined that the amount of sediment that eventually filled the valley reach a total thickness of ~14,000 feet.