My next post about the Geology of the National Parks Through Pictures is from a trip I took with my father back in 1997 out to Montana from New York. 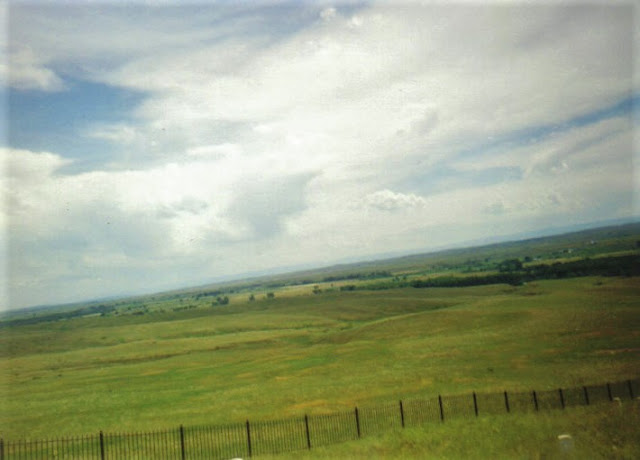 The Battle of Little Bighorn lies along the Little Bighorn River, which is within the western edge of the Great Plains region of the US. The ground surface is an undulating terrain created by ridges of the underlying bedrock, ravines, and coulees (small, intermittent streams). The bedrock exposed within the park includes the Upper Cretaceous Age Judith River (~80 to 76 million years old) and Bearpaw Formations (~75 to 70 million years old). The Judith River Formation was deposited along the shoreline of the Western Interior Seaway, which was a body of water that covered much of the middle of North America from the Gulf of Mexico up into Canada during the Cretaceous time period. The Judith River Formation is comprised of sandstones and shales deposited along the shoreline and is one of the major dinosaur fossil bonebeds in the US.
The subsequent Bearpaw Formation (AKA Bearpaw Shale), is a shale layer deposited within the depths of the Western Interior Seaway, when that body of water covered the area. Many ammonites have been found within the Bearpaw Formation as well as a notable plesiosaur within the park. Back in 1977, a routine grave excavation was occurring in Custer National Cemetery and a NPS maintenance employee exhumed pieces of the plesiosaur Dolichorhynchops osborni. After six days of work, a nearly complete vertebral column, a complete pectoral girdle, and complete pelvic girdles were collected by after-hours volunteers and local paleontologists Russell King and Alan Tabrum. 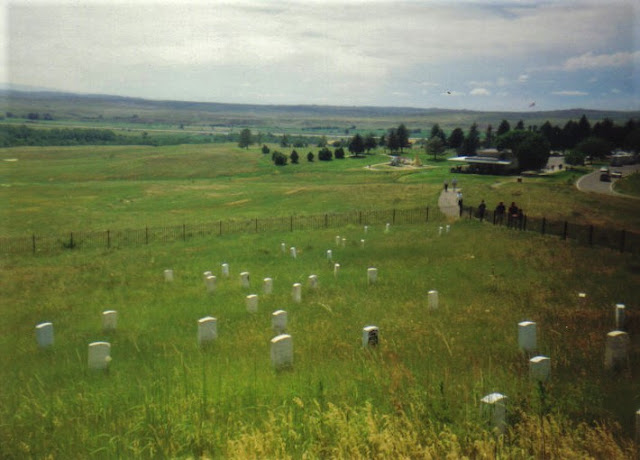 Here is a view from Last Stand Hill that overlooks the floodplain of the Little Bighorn River. The meandering Little Bighorn River floodplain dominates the southwestern edge of the battlefield. The terrain of the battlefield was highly influential in the progression of the battle. The ridges within the landscape offered defensible high grounds for the soldiers of the 7th Cavalry, while the coulees and ravines provided shelter for the advancing Lakota Sioux and Cheyenne warriors.
The markers here, and elsewhere within the park, denote the locations where people had fallen during the battle. The white, marble stones obtained from Italy denote places where Custer's soldiers fell. Where the Native American warriors fell are markers of red granite, although I am not entirely sure of the source of the granite. NPS sources denote it as "Radiant Red" granite from Cold Spring, Montana. However Radiant Red granite comes from Fredericksburg, Texas, while I can't find any granites that are quarried near the town of Cold Spring, Montana. Looking at Radiant Red granite, there are a bazillion names that it can be found under, however the proper geological name is the Town Mountain Granite, that is Proterozoic in age. It is coarse grained, pink to red in color, and contains abundant quartz, plagioclase feldspar, and microcline. The feldspar is what gives the rock its pinkish red hue. 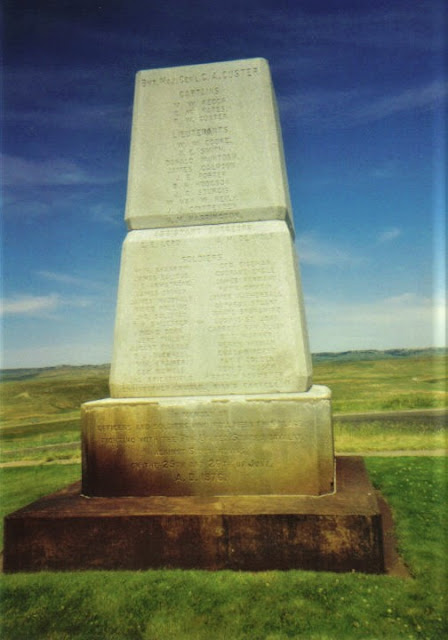 On top of Last Stand Hill is the 7th Calvary Memorial, a monument to all of those who fell during the battle was erected in 1881. The names of all of the soldiers, Indian scouts, and attached personnel who fell on the battlefield are carved into the stone. The monument is composed of granite of unknown type from the Mount Auburn Marble and Granite Works of Cambridge, Massachusetts. Interesting note, an iron fence was added two years after the memorial was erected to keep people from chipping off "souvenirs" of the memorial. The edges were later beveled in 1890 to hide the vandalism and later the fence was removed.
References
https://mrdata.usgs.gov/geology/state/sgmc-unit.php?unit=MTKjr%3B0
https://irma.nps.gov/DataStore/DownloadFile/431897
https://pubs.usgs.gov/wsp/1487/report.pdf
https://www.nps.gov/libi/learn/nature/geology.htm
https://www.nps.gov/libi/learn/nature/fossils.htm
https://pubs.usgs.gov/pp/1561/report.pdf
https://www.history.com/topics/native-american-history/battle-of-the-little-bighorn
https://quarriesandbeyond.org/name_and_origion/r.html
https://commons.wikimedia.org/wiki/File:Dolichorhynchops.jpg
at November 16, 2020