My next post about the Geology of the National Parks Through Pictures is from a park that we had visited almost on a yearly basis for the last few years and is the park I had easily been to the most. 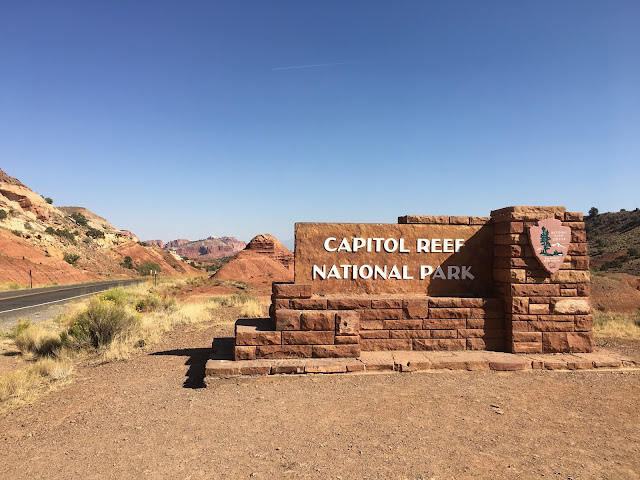 Despite all these years of going to the park, I only just grabbed an entrance sign shot the last time we went in 2020.

The most characteristic features of Capitol Reef is the way that the rocks have been folded across the park. With an axis running nearly 100 miles north to south, is a feature called the Waterpocket Fold. There are several different types of folds when we look at rocks. When rocks are folded in a "U" shape, this is called an syncline. When rocks are folded the opposite way, essentially an "A" shape, this is called an anticline. However, when you have a stair-step fold, where one side of the fold is generally horizonal, then its comes down to another horizonal layer, you have what is called a monocline, and that is what the Waterpocket Fold is. You can essentially see this fold in the way that the rocks dip towards the east through much of the park, such as in the image above looking towards the south.
Folded approximately 50 to 70 million years ago, the rocks within the park mainly range in age from the Early Permian age White Rim Sandstone (~280 million years old) to the Late Jurassic Age Morrison Formation (~150 million years old). Because of the Waterpocket Fold, the older rocks are easier to see in the western portion of the park and the younger rocks are more exposed in the eastern portion of the park.

Along the western part of the park is the Goosenecks Overlook, where you can look down into the oldest rocks at the park. The canyon was created by the Sulphur Creek cutting down into the rock units as the rocks were being uplifted. At the base of the canyon can be found the Early Permian White Sandstone. The White Rim is a ~280 million year old coastal sand dune deposit that had been bleached white by hydrocarbons flowing through the rock picking up the iron oxide within the sandstone. On top of the White Rim within the canyon here, and taking up most of the middle of it, is the Early Permian Kaibab Limestone, a ~270 million year old shallow marine shelf deposit that preserves the ancient Kaibab Sea that once flooded most of Utah. 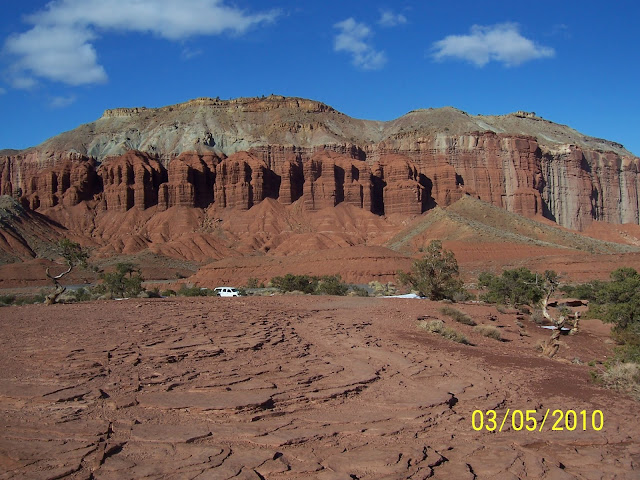 On top of the Kaibab Limestone is the Lower Triassic age Moenkopi Formation (~245 million years old). The Moenkopi Formation is predominantly made up of the reddish-brown shale that is found throughout the western part of the park. This was deposited within an intertidal environment, with alternating sea levels producing thinly bedded layers of mud (shale) and sand (sandstone). 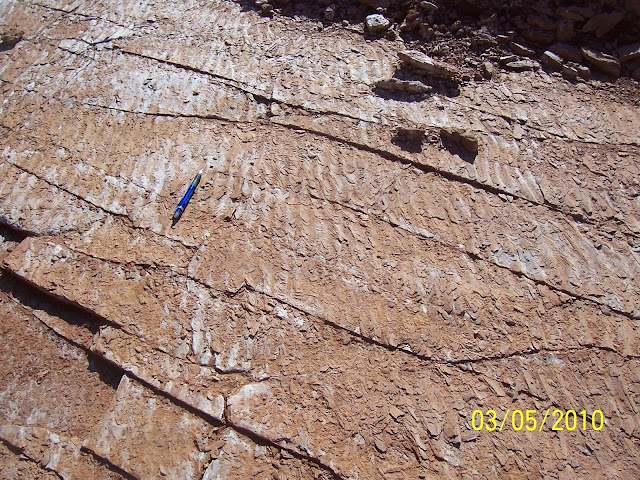 Due to the low water levels within the Moenkopi, it preserves many shoreline features such as ripple marks and... 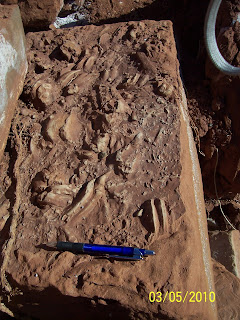 ...animal swimming traces. Here is where a small reptile was swimming along in fairly shallow water and its claws scraped the mud at the bottom. These features can be seen within the gully, just on the south side of the road near the Goosenecks  Overlook. 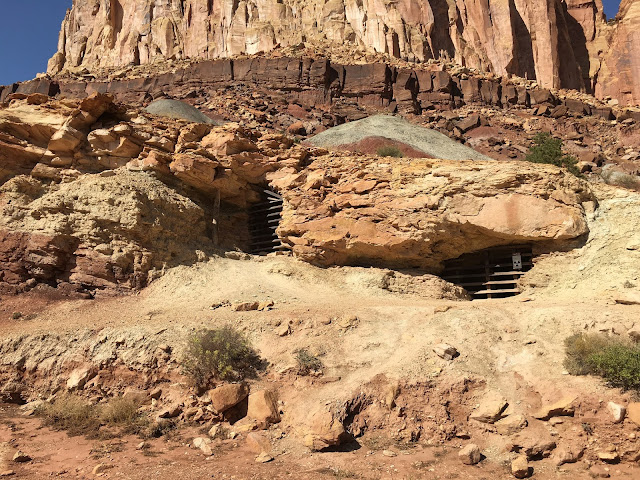 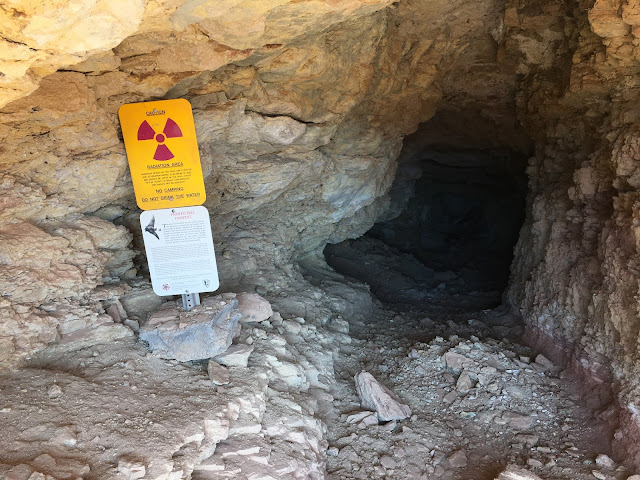 These uranium deposits were often mined in the early 1900's for medicinal uses and the 1950's for its nuclear properties. Eventually, the amount of uranium within the mines wasn't worth the cost of extracting it and the mines were abandoned. 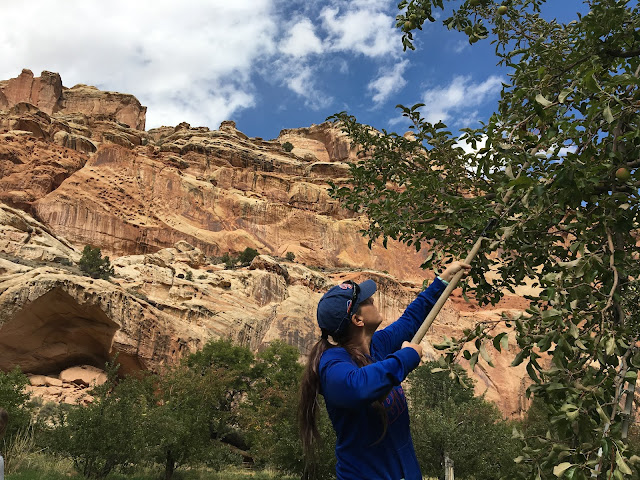 On top of the Chinle Formation is the Wingate Sandstone. Like I mentioned, the primary reason that we headed to Capitol Reef was for the apple picking in the fall. The orchards are located mostly around the "town" of Fruita within the park. This is where the campground and the Visitor's Center are located. They can also be found extending east to west along the main highway, and the Fremont River, that cuts across the park. But from these you can get some gorgeous shots with the red rocks in the background. The rocks in the background are the Early Jurassic age Wingate Sandstone. The Wingate is a eolian sandstone, meaning that these rocks formed as part a desert ~200 million years ago. 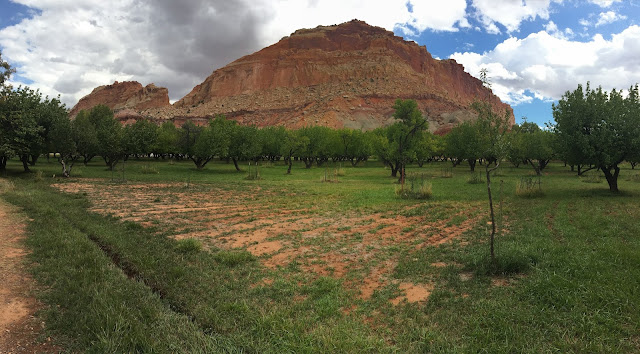 Here is another orchard with the Wingate Sandstone in the background. The Wingate is characterized by those shear vertical cliffs and the red tint to the rock caused by the oxidation of iron coating the sand grains (rust). 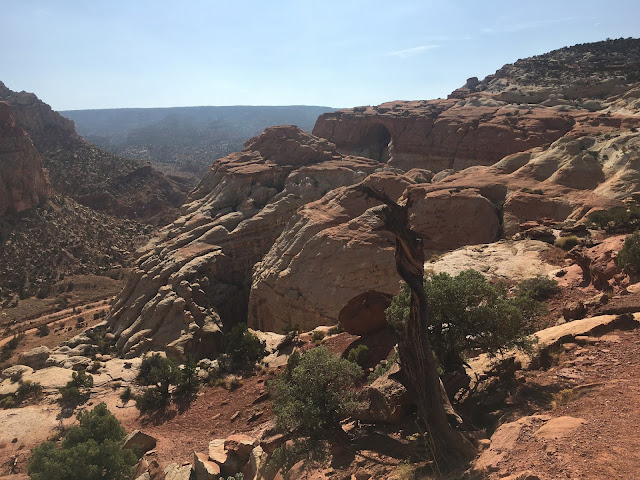 One of the notable geologic features within the Wingate is Cassidy Arch, seen here just above the dead tree in the foreground.

Here is Cassidy Arch from the top, looking down into the arch.

On top of the Wingate is the Early Jurassic age Kayenta Formation (~190 million years old). The Kayenta is a mix of reddish-brown sandstones, siltstones, and conglomerates that interbed with each other. The Castle seen here on the left side of the photo from the Visitor's Center, is the vertically jointed Wingate Sandstone, while the Kayenta Formation is more horizontally jointed directly above it to the right. 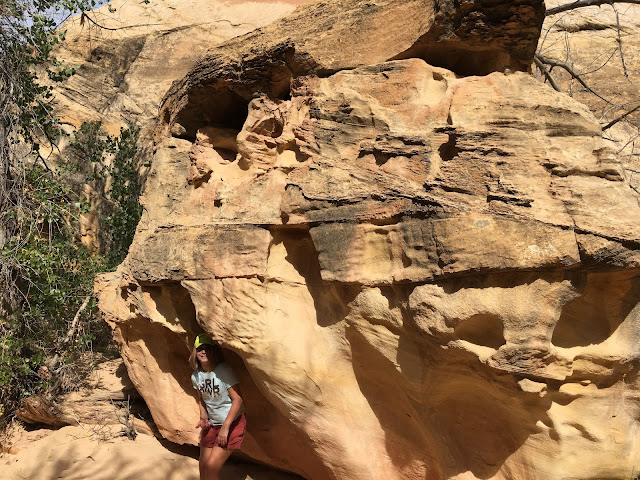 Like the Navajo Sandstone above it, the sandstone layers within the Kayenta Formation are notable by the eolian formed cross beds, which are angular deposits created as sand dunes move across the desert. Wind blows the sand up one side of the dune, up over the crest of the dune, and then the sand falls down the slipface. The crossbeds are then the preserved record of the slipface side of the dunes locked into place by cement, often calcite or silica. 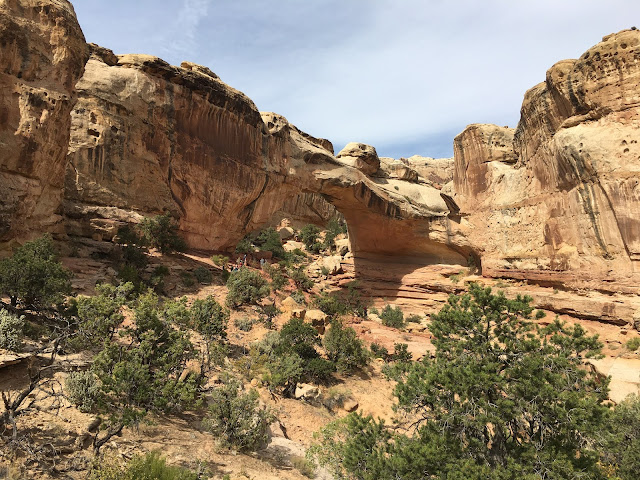 The Kayenta Formation also contains the Hickman Bridge, a natural bridge carved out of one of the sandstone layers within the formation by the stream flowing beneath it through the softer layers below. 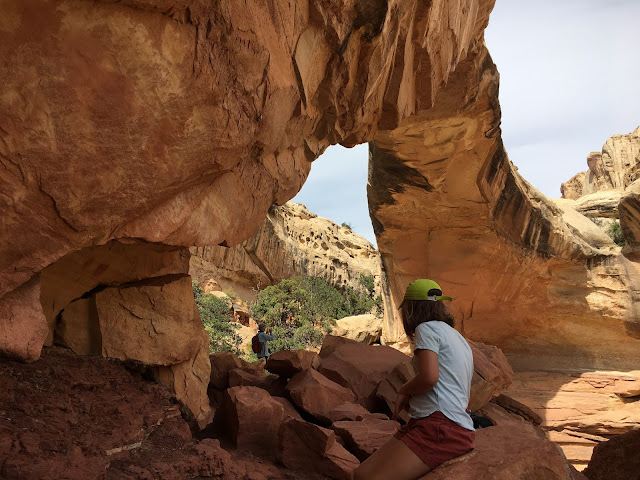 View from underneath the bridge, hoping to get a good angle emphasizing the "bridge aspect of it. 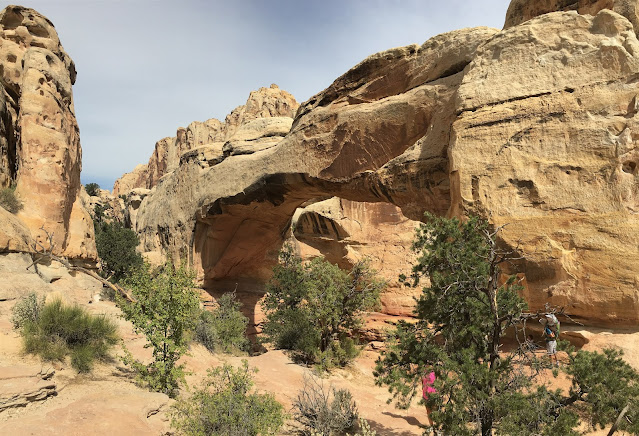 View from the western side of the bridge.

Looking west off the Cohab Canyon Overlook  you can see the dip of the beds towards the east as well as most of the rock units we talked about.

Turning around, here is the view to the east from the Cohab Canyon Overlook. On top of the Kayenta Formation is the Early Jurassic Navajo Sandstone (~180 million years old). The Navajo is a very thick (~1000 feet) eolian sandstone from an ancient sand sea known as an erg. The Navajo is notable by its whiter appearance than the reddish Wingate Sandstone and erodes more rounded features, unlike the Wingate which has more vertical jointing. The Navajo also has abundant cross beds throughout the formation. 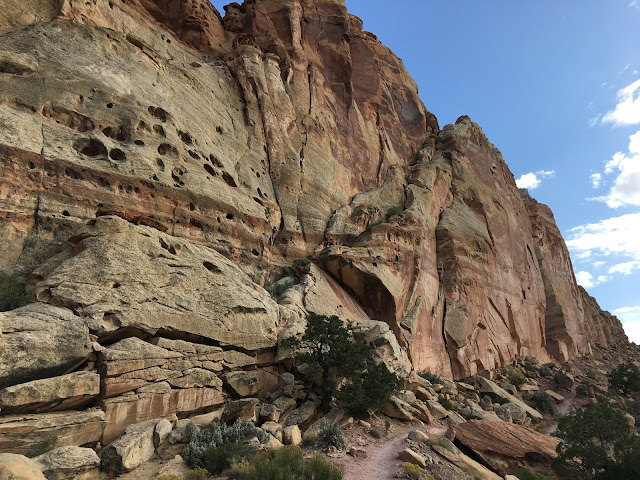 The Navajo also has a type of weathering called honeycomb weathering, where these pockmarked patterns occur along the surface of the rock. This is produced as water wicks into the porous rock and dissolves the calcite cement holding the grains together. 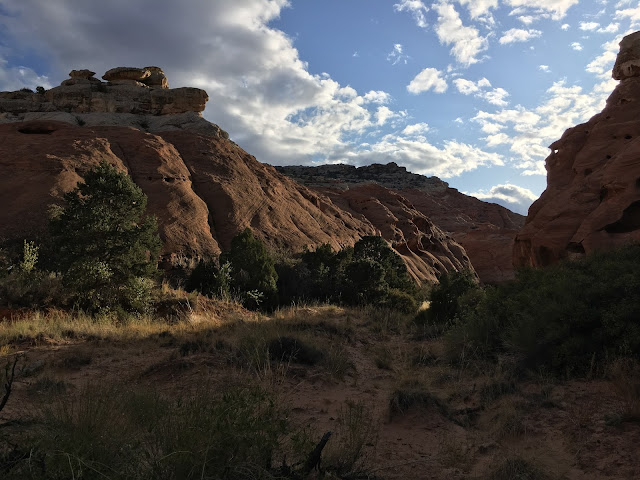 Although the last major rock unit within the park, there are several rock units located above the Navajo Sandstone within the eastern parts of the main highway. These include rocks of the Jurassic age San Rafael Group and the Morrison Formation. 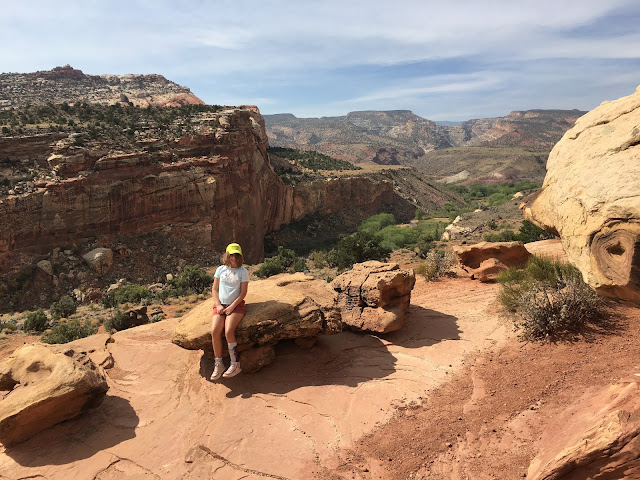