Geology of the National Parks in Pictures - Antietam National Battlefield

My next post about the Geology of the National Parks Through Pictures is a park we visited back in 2002 on a Spring Break trip. 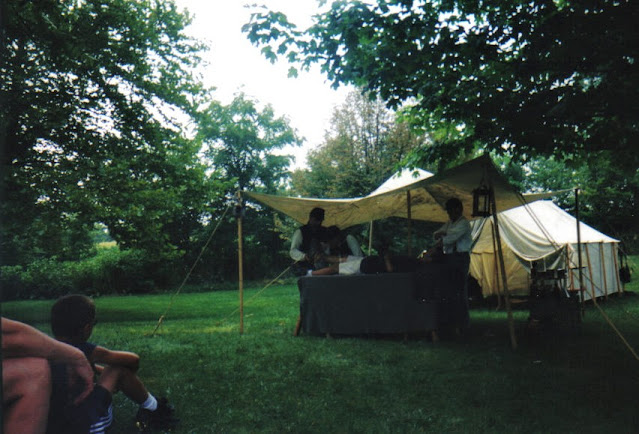 To simulate Civil War war medicine, here I am having my leg amputated ("bite down on this"). This is because Civil War battlefields are notorious for quick and dirty surgeries, but can that be tied to the geology of the region? Battlefields, are often difficult to ascertain the geology of because, typically they are open, flat lying areas where the rocks are located below layers of soil. But that, in and of itself, is because of the geology.
Antietam is identified as the bloodiest battle in American history with over 12,000 American casualties over 3 hours of fighting. This is because the landscape of the area is made up of primary two types of bedrock, limestone and dolomite. These are represented by the Chambersburg Limestone (Ordovician age), New Market Limestone (Ordovician age), Pinesburg Station Dolomite (early Ordovician age), Rockdale Run Formation (early Ordovician age), Stonehenge Limestone (Ordovician age), and Tomstown Formation (Early Cambrian age).
Due to the erodibility of the limestone versus the dolomite, the limestone areas are often much flatter than the dolomite areas. This has a tendency to divert the fighting towards the limestone terrain. It has actually been shown that Civil War battles have a tendency to occur on limestone bedrock because of the flatter, open areas that they represent. And although limestone is known for its ability to dissolve in contact with water over time, without a caprock to prevent continuous dissolution, the area has a tendency to erode more evenly.
References
https://www.smithsonianmag.com/history/civil-war-geology-123489220/
https://irma.nps.gov/DataStore/DownloadFile/426451
Posted by Jim L. at 1:59 PM