My next post about the Geology of the National Parks Through Pictures is a park we visited in 2005 as I moved from Texas to New York. 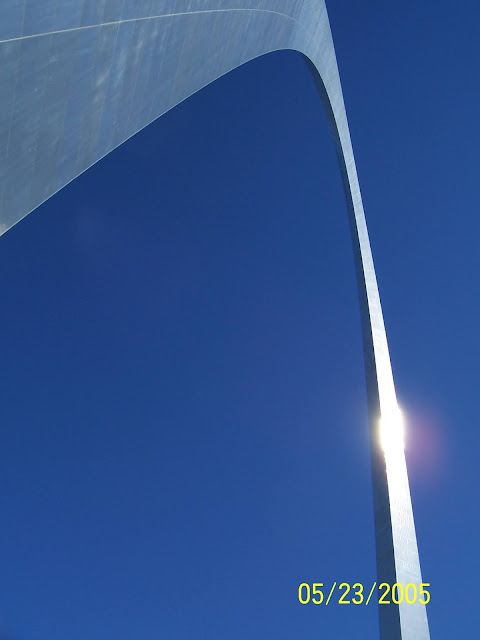 The Gateway Arch is clearly the centerpiece of the park, hence the name change. The Arch itself is 630 feet tall, 630 feet wide, and goes 60 feet into the ground. It is composed of steel and concrete. The outside skin is 1/4-inch stainless steel, followed by a layer of concrete, then 3/8-inch structural steel on the inside. The shape of the Arch is termed a catenary arch, which is the shape of a free-hanging chain when held at both ends. 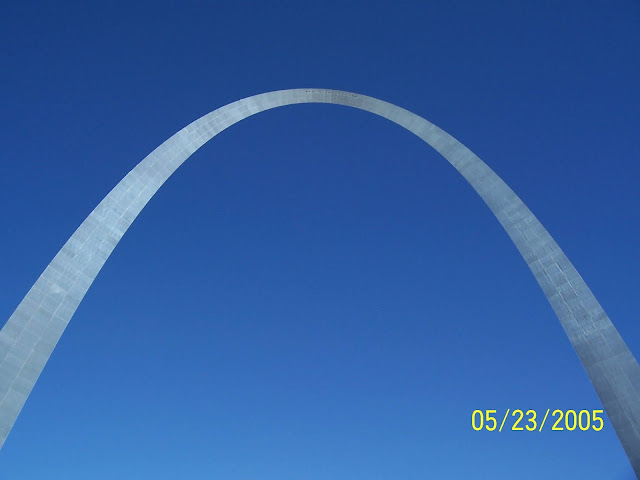 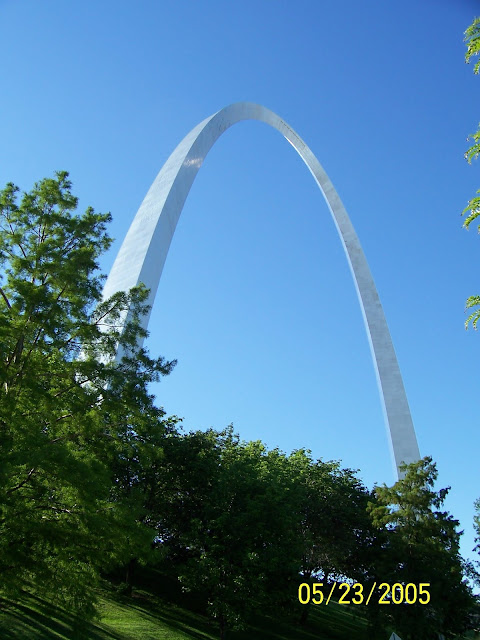 The Arch sits within the floodplain of the Mississippi River, where the floodplain is 6 to 10 miles wide. After the river front bluff of St. Louis Limestone was quarried away, construction began on levee in 1835. This enabled the waterfront to be used as a port where the goods on the larger ships from the lower Mississippi could be transferred to smaller ships for transport up the smaller upper Mississippi, Illinois, and Missouri Rivers. The original levee, made of mud, eventually was replaced with a levee made from the locally quarried St. Louis Limestone. 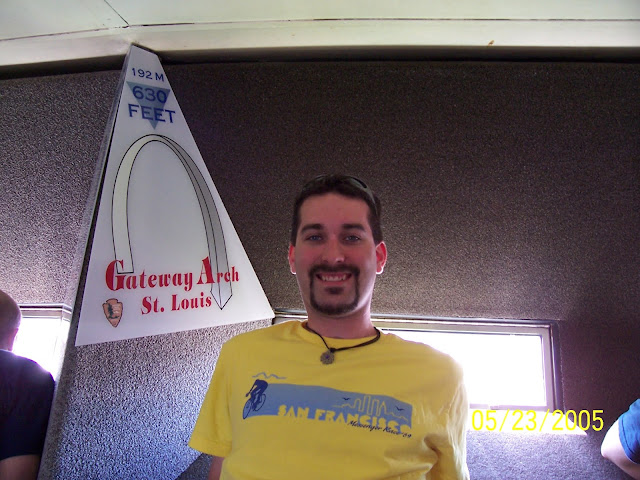 They have trams that can take you to the top of the Arch where you can hang out as long as you want, however the lack of bathrooms deems that eventually you will need to leave. 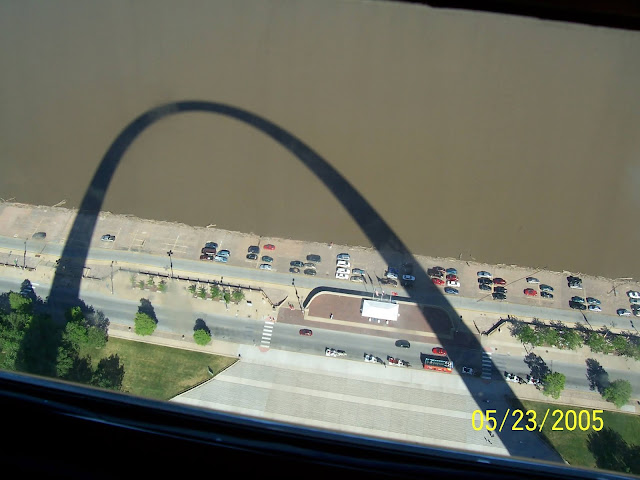 Here is the view looking east, towards the Mississippi River. The sun was also at the perfect angle to capture the shadow of the Arch as well. 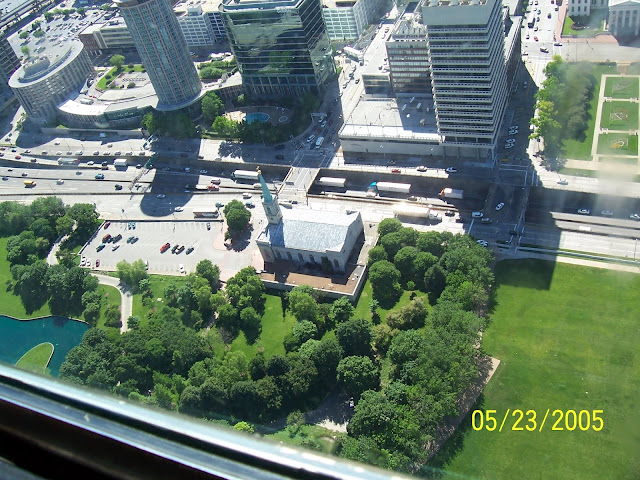 Looking west you can see the other two main buildings of the Gateway Arch National Park. Here is the  Old Cathedral. From up close there are actually several building stones that are used in abundance in the building from the surrounding region. Started in 1831, the Cathedral took 3 years to complete, with new stones being added during later renovations. The sides and rear walls of the Cathedral are composed of the same St. Louis Limestone that the Arch is anchored in. These blocks were likely quarried from the nearby riverfront. The front wall and columns are of an unknown dolomite, however it is likely the Joliet limestone, a Silurian age (~430 million year old) massive, very fine-grained, tan colored stone. Windowsills throughout the cathedral are made from Mississippian age Salem Limestone (~335 million years old). These were stone products sold as "Indiana Stone" and were likely installed during renovations in the early 1960's. The steps leading up to the cathedral are crystalline pink Precambrian granite from the nearby St. Francois Mountains. These steps replaced the original sandstone steps back in the 1880's. 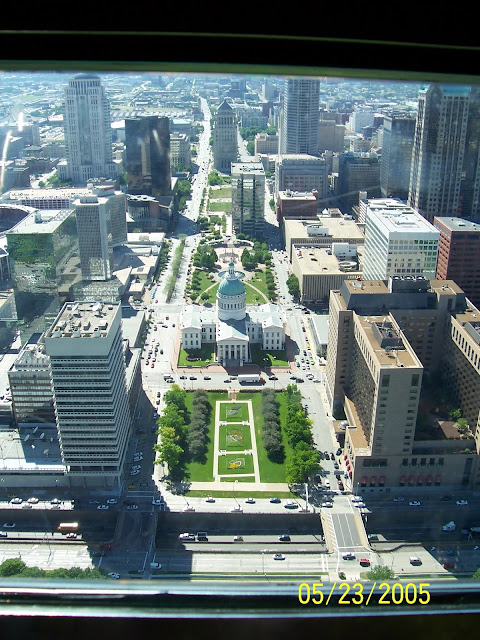 Looking west down on the old Courthouse from the top of the Arch. The Courthouse also contains several different types of local building stones. Construction of the Courthouse began in 1839, however after many hiccups and delays during construction, it was not completed until 1862. Like the Cathedral, St. Louis Limestone is used extensively within the building. However, since the building has several coats of paint on it to hide variations in building stones, it is difficult to determine what other building stones had been used. One of the buildings stones was noted by NPS renovators was a crystalline fossiliferous Mississippian limestone, containing numerous unconsolidated fossil shell fragments. The above noted Salem Limestone was also used during renovations here to replace damaged to deteriorating cornice and floor elements. The columns are comprised of Ordovician age Kimmswick Limestone (~465 million years old). This is a massive, white to light grey, fossiliferous limestone. The steps are Precambrian granite porphyry from Cold Springs, Minnesota, installed during renovations in the 1950's. And lastly, the flooring throughout the Courthouse is from a variety of stones including the St. Louis Limestone, the Ordovician Plattin Limestone, sometimes called the McPhereson "marble", the Mississippian Warsaw Limestone, sometimes called the Carthage "marble", and the Cambrian Taum Sauk Limestone.
References
https://www.gatewayarch.com/experience/about/#fun-facts
https://wonderopolis.org/wonder/how-was-the-st-louis-arch-built
https://share.mo.gov/nr/mgs/MGSData/Books/Special%20Publications/The%20Geologic%20Story%20of%20the%20St.%20Louis%20Riverfront%20-%20A%20Walking%20Tour/SP-006.pdf
https://pubs.geoscienceworld.org/sepm/jsedres/article-abstract/51/1/7/113665/Dedolomitization-in-the-Taum-Sauk-Limestone-Upper?redirectedFrom=fulltext
Posted by Jim L. at 10:02 AM