What are...Groups, Formations, and Members

For the next entry into my What are ...? series, I am looking at what exactly do geologists mean when they use terms like Group, Formation, and Members. Although the term "Formation" is used as the primary formal unit of classification, there are many different terms used to identify different bodies of rocks, and they can get a little confusing if you aren't used to it. Rock units can be broken down or combined together into varying degrees of resolution. How closely are you looking at the rocks and how closely related had they been formed will influence how a geologist groups them together. To help illustrate my point I put together this graphic. 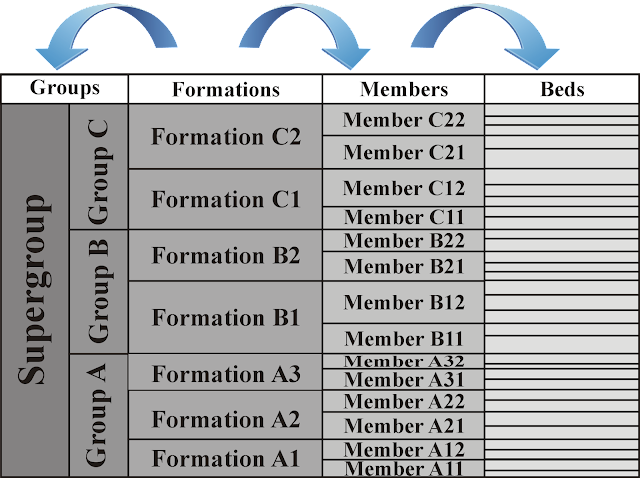 When naming rock units, geologists look at the environments that the beds were formed in, the time period in which they formed, how long it took to form the beds, and how different are each of the units compared to those around them. All of the above provide different resolutions of rock units.

Lithostratigraphic Unit (AKA, rock unit) - A body of rock that consists dominantly of a certain lithologic type or combination of types, or has other unifying lithologic features. It may be igneous, sedimentary, or metamorphic, and it may or may not be consolidated.

Lithostratigraphic units start at the formation level and can be broken down into smaller units, such as members or beds, or can be combined together into larger units, such as groups or supergroups.

Bed - The smallest lithostratigraphic unit, commonly ranging in thickness from a centimeter to a meter or two and distinguishable from the beds above and below. They are rarely given individual names unless they are distinctive for some reason, such as a dated ash layer.

Member - A lithostratigraphic unit comprising of some specially developed part of a formation. It may be formally defined and named, informally named, or unnamed. A member does not necessarily need to be mappable. A formation also does not need to be divided up into members, or could even have only parts of it seperated out into members, specifically if it is useful to do so.

Formation - The fundamental lithostratigraphic unit that consists dominantly of a certain lithologic type or combination of types. A formation is a lithologically distinct, mappable body of rocks. Being lithologically distinct means that there must be a notable and identifiable contrast between the units of rocks to justify their division into two different formations. There is no limit to how thick, thin, or widespread a formation needs to be.

Group - A stratigraphic unit that includes two or more associated formations that are usually contiguous or associated and contain significant features in common. Formations though do not need to aggregated into groups unless there is a useful reason to do so.

Email ThisBlogThis!Share to TwitterShare to FacebookShare to Pinterest
Labels: What are ...