Beaches come in all shapes and sizes, however the vast majority of beach sands are made up of quartz. These are the beaches where the sand is the color of, well, sand. It is that light orangish hue that sometimes grades towards white. It is a hue so common in the world that the name "desert sand" was even adopted as an official palette color.

This "typical" sand is made up of quartz grains that had been eroded down into "sand-sized" grains, coated frequently in a microscopically thin layer of iron-oxide, giving it its unique hue. The reason why sand is frequently comprised of quartz is that quartz is one of the most abundant minerals on the surface of the earth, making up a large majority of the rocks on the surface such as granite and sandstones. It is also extremely hard compared to other minerals (a 7 out of 10 on Moh's hardness scale), it has a fairly simple crystal structure comprised of only two elements (SiO2), and it doesn't have cleavage, the ability to break along plains of weakness in the mineral. This means that as it erodes, it erodes down into a small ball, instead of breaking down along flat edged blocks.

With granite being one of the most abundant rock in mountains, and beaches composed of sand from the breakdown of mountain rocks, then that being the case, it is rather rare to have a beach NOT comprised of quartz sand. Beaches get their sand from rivers that carry eroded sediment from local or distant mountain ranges. Over the course of the river, the rocks from the mountains are broken down into smaller and smaller pieces, until all that is left is the most resistant mineral grains.

However, sometimes you can get beaches comprised of different minerals or chunks of rock than quartz. There are a few ways this can happen. One way is that these minerals and rock chunks can come from sources closer and more local to the beach, so that they haven't had the distance and time to erode down all the way. Or you can have an instance where quartz is not present in the source rock at all, or much less abundant than other minerals. Both of these occurrences are what we have in Hawaii.

The Geological Context of Hawaii

Hawaii is a volcanic island made up from the volcanic eruptions of a hotspot deep within the mantle. A hotspot is a non-moving plume within the mantle that melts the crust on top of it. However, the Earth's crust moves around on top of these hotspots. As the Pacific plate moves over the Hawaiian hotspot, it melts the crust and creates a series of volcanoes as it passes over. That is the string of Hawaiian Island, where the only active volcanoes are located on the Big Island, where the hotspot is currently located.

Hawaii's volcanic rocks are composed of Basalt. This is a silica-poor rock, meaning that it lacks any quartz in it whatsoever. Basalt is also very black in color. And being located nearly in the center of the Pacific Ocean, away from any other sources of rocks, all of the sand on Hawaii needs to come from the islands themselves. So since Hawaii doesn't have quartz, what is the sand comprised of? Well, that depends heavily on which island you are on and where you are located on that island. 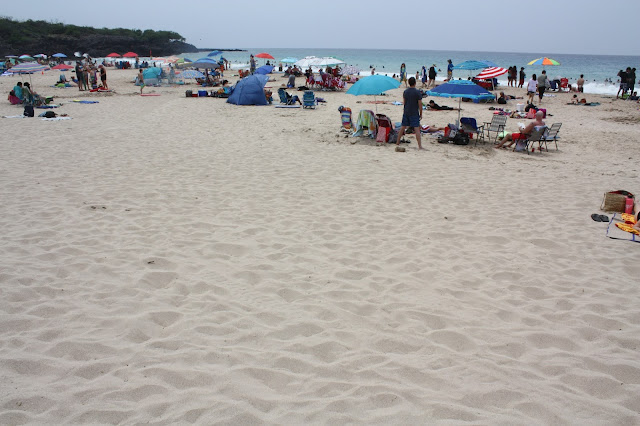 This is a shot of Magic Sands Beach Park on the western shore of the Big Island. Looks like quartz sand, doesn't it? But I just said there was no quartz in the volcanic eruptions, and the basalt, which is the primary rock type, is black. But this isn't black. Let's take a closer look. 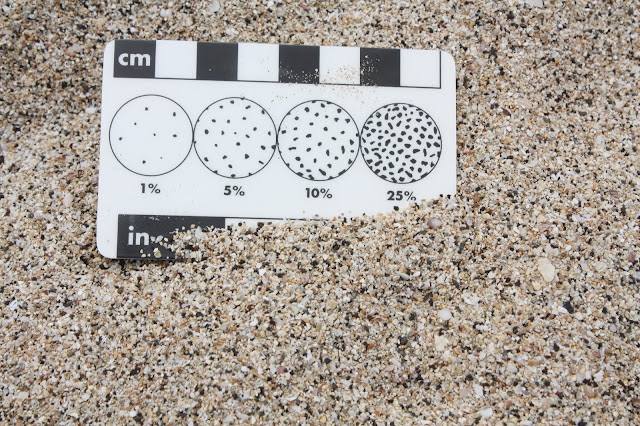 When you look real close at the sand, not only are there chunks of black, like predicted, but all of that white and tan colored stuff isn't quartz. Quartz beach sand typically has a polished glass look to it when you look at it real close, however here, this sand looks opaque and generally has an angular appearance to it. This is because the sand is made up of animal shells and broken up pieces of coral reefs, which are both composed of calcite. So the majority of this beach is calcite sand, not quartz. And calcite is a much softer mineral than quartz (which has a Mohs Hardness of 3, about as hard as copper), allowing it to break down much faster than quartz but also be softer on to feet than quartz sand. These grains of coral sand are generally produced as poop from the parrotfish, which ingests the calcite while eating algae off of the corals and other rocks but can't digest it.

So that's the white sand beaches, but since Hawaii in composed mostly of black rocks, shouldn't there be "black sand" beaches. And indeed there are. One of the most famous is Punalu'u Black Sands Beach on the southeastern shore.

At Punalu'u Black Sands Beach, the sands really are black. You can even see many of the lava flows that formed this part of the island still on place along the shores that aren't covered in sand. 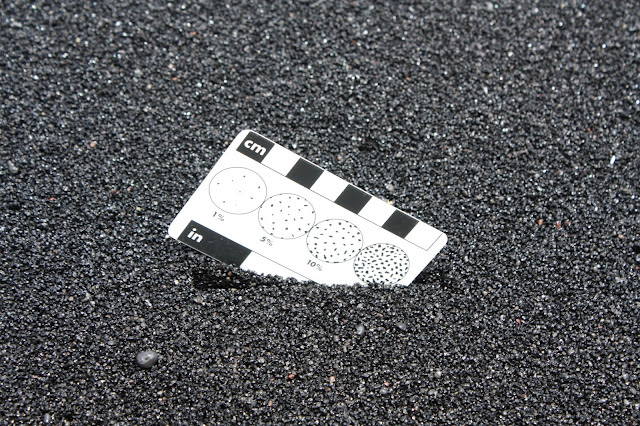 Here the sand is made up of tiny eroded pieces of basalt that when looked at closely really resemble that chocolate rock candy a lot. 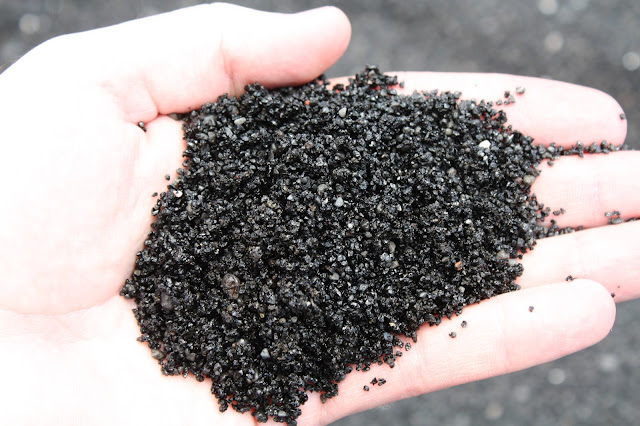 When looking at the location of Punalu'u, it sits almost exactly at the junction of the Kilauea and Mauna Loa volcanic eruptions as see on the map above. 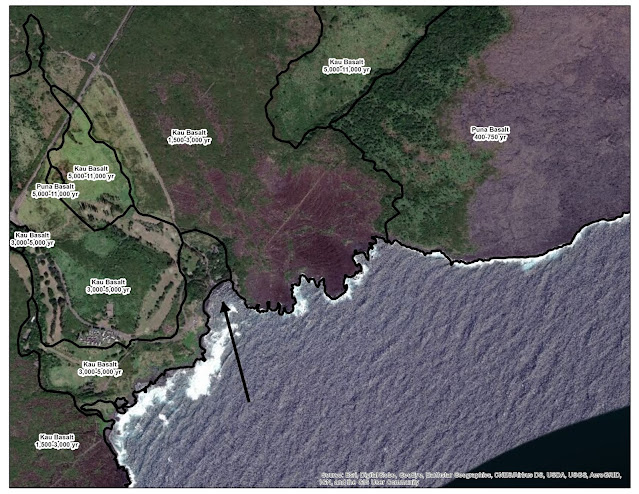 Taking a zoomed in look at the area. The arrow is pointing to Punalu'u Beach. Here we can see that the Kau Basalts surround the beach area. Kau Basalts are the ones erupted by Mauna Loa. The lava flows on the beach, inland of the beach, and to the southwest of the beach are all lava flows dated from 3,000 to 5,000 years old. Directly across the inlet on the northeastern shore of the inlet contains much younger lava flows from Mauna Loa dating from 1,500 to 3,000 years old.

Here is a view of the beach from a little higher in elevation and back from the shore a bit. These lava flows are the 3 to 5K Kau Basalt lava flows. Looking out across the water, where a lot of the greenery is located, are the 1.5 to 3K Kua Basalt Lava flows. 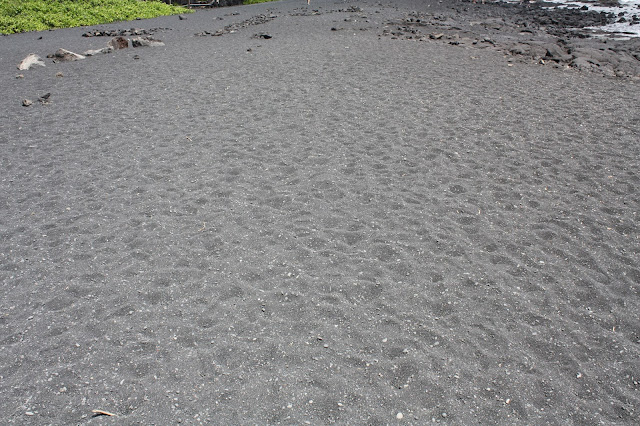 But since the sand on a beach doesn't just come from the sand in the local environment, there is likely to be other basalt sources in this sand, and that's where the Kilauea Volcano comes in. It is actually very close to this beach, just around the point across the water. On the the geologic map, all Kilauea volcanic eruptions are identified as Puna Basalts. With the large land mass around the point dating from 400 to 750 years old. And there is an even older, covered over lava flow directly uphill, and upstream, from hear on the geologic map dated from 5,000 to 11,000 years old. 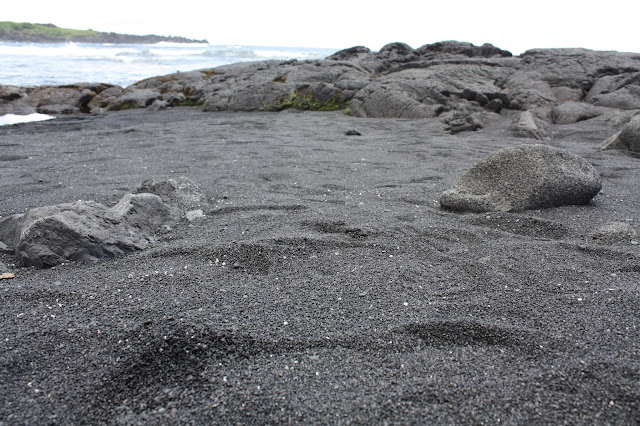 Both of these volcanoes contributed greatly to these black sands beaches. And you even have the small assortment of coral and shell pieces mixed in, just as at the Magic Sands beach above, but to a much smaller percent. 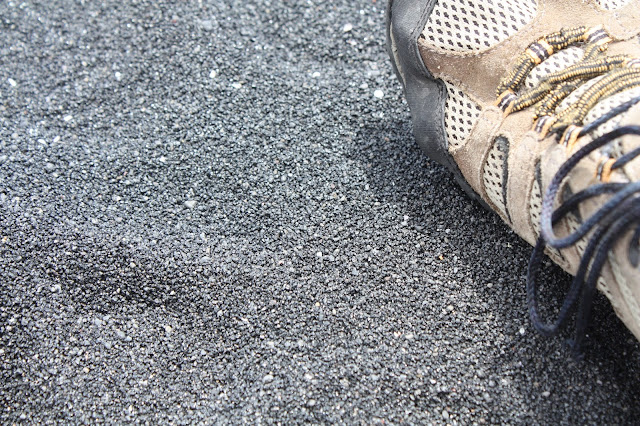 The differences in the beaches can be attributed to the directions of the winds, and therefore the ocean currents around the islands. The wind patterns generally blow from east to west across the island. This is what creates very rainy weather in Hilo (on the eastern shore), while you get dryer weather in Kona (on the western shore). These winds and ocean currents then create a haven for coral reefs along the western shore, while the southern shore is much more limited of coral life. 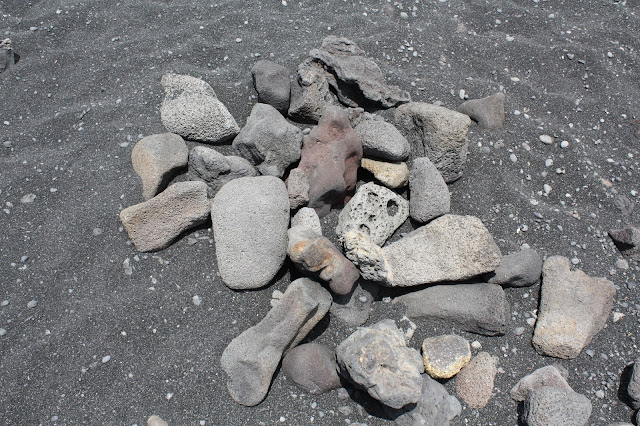 Due to the short transportation distance from mountain (volcano) to beach, the sand grains don't have the ability to be sorted out by size as much as much more mature landscapes do. This is the reason North American east coast beaches tend to have beaches completely composed of the same sized sand grains. Water is a marvelous sifter, both river water and ocean/wave currents. But here, the rivers and streams are much shorter to the beach, so you have a much wider variety of rock and sand sizes founds. Where large cobble sized rocks are mixed in with the smaller sand size grains. 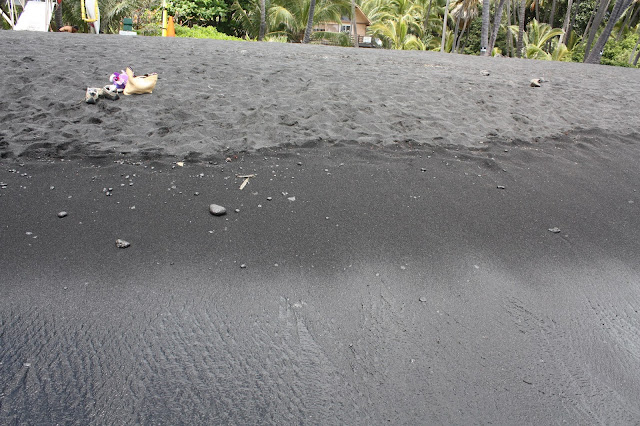 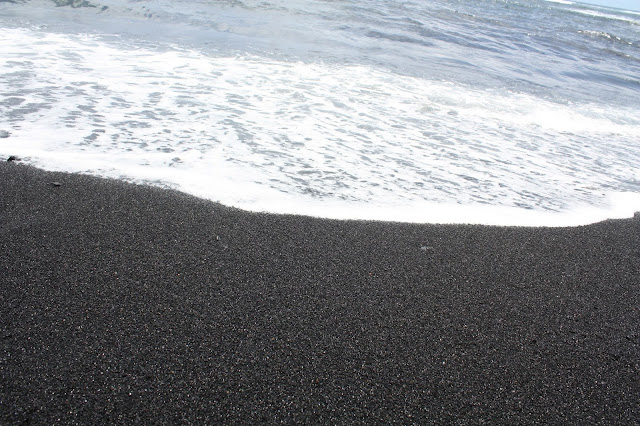 But regardless of the geological context, the Black Sands beach is a marvel to behold and well worth the trip to see it. Nearby here, there is also the Green Sands beach, which has a high concentration of a basaltic mineral known as olivine. However, I wasn't able to visit that beach on this trip. Perhaps next time.
at December 14, 2020