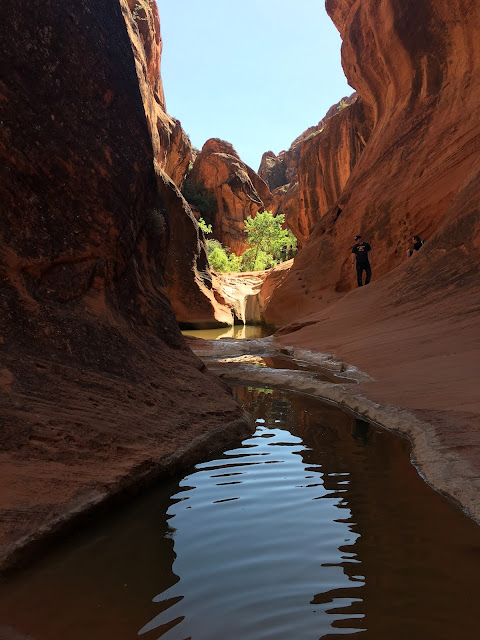 One the great things about Utah is that even when not going to the National Parks, there's literally countless little geological oases that one can find themselves in. One of my favorites is a little campsite/park called the Red Cliffs Recreation Area just outside of St. George, Utah. The park straddles the line between two geological formations, the Kayenta Formation and the Navajo Sandstone, with the boundary between the two running right through the middle of the campground. 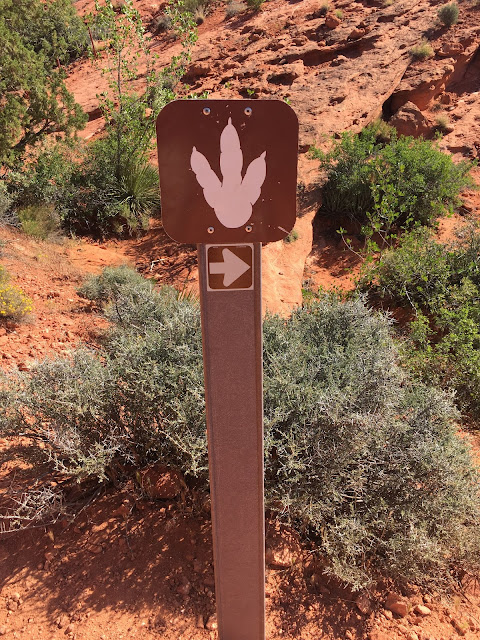 Starting within the campground, the Silver Reef Trail almost immediately takes you to one of the paleontological highpoints of the area, the Dinosaur Track Site! These dinosaur tracks are located in the uppermost reaches of the Kayenta Formation. The Kayenta Formation is an Early Jurassic (~190 million years old) mix of reddish-brown sandstones, siltstones, and conglomerates that interbed with each other. These were deposited within a meandering river environment and one of the notable features within the deposits are … dinosaur tracks. 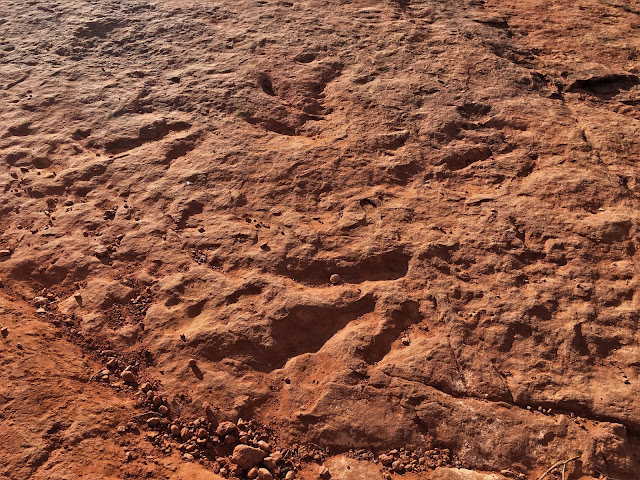 The lighting on these at the time wasn't fantastic but you can still make them out. I also tried to adjust the contrast and lighting on the picture to emphasize them. Dinosaur tracks are a type of trace fossil. Trace fossils, which I go over HERE, are evidences of behavior of animals without the actual animals being preserved; things like worm burrows or fossilized poop or footprints. Trace fossils are also named like regular fossils but instead of being a genus and species, they are named with an ichnogenus and an ichnospecies (ichno meaning trace). The dinosaur tracks found within this park are identified as Grallator and Eubrontes. It should be noted that the makers of any trace fossils is often up to conjecture. Very rarely do scientists find the animal associated with the trace but often it can be narrowed down by the size and build of the animals around at the time compared to the trace morphology. 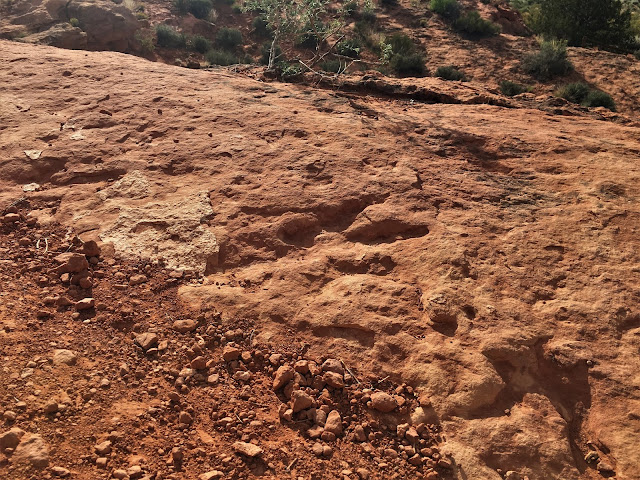 A great place to learn about dinosaur tracks is the nearby St. George Dinosaur Discovery site, which has tons of footprints with many of them preserved in place (in situ) and the building is literally built right on top of them. Of the tracks found at Red Cliffs, Grallator is a 4- to 8-inch-long, three-toed print, that probably belonged to a slender, meat-eating dinosaur such as the 10-foot-long Megapnosaurus. Eubrontes (seen in the center of the picture above) is a larger 13- to 18-inch-long, three-toed print, which is thought to be made by a large meat-eating dinosaur such as the crested Dilophosaurus (think the original Jurassic Park but much, much bigger). 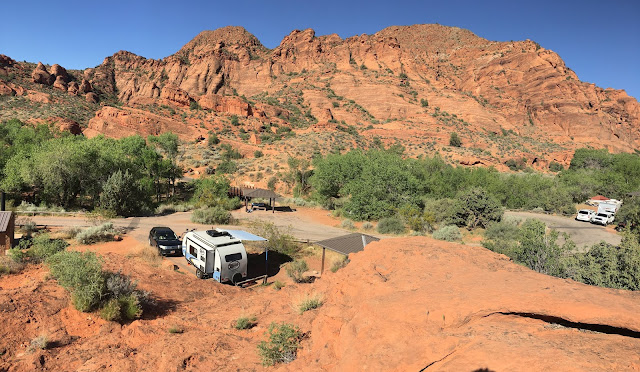 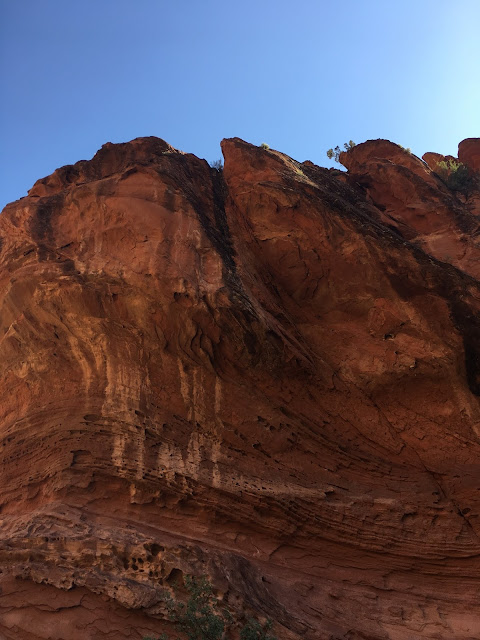 The Navajo Sandstone is a rather famous sandstone, being found in many of the national parks in southern Utah creating fantastic geological outcrops, such as those seen here. The Navajo Sandstone is a very thick (~1000 feet) eolian sandstone from an ancient sand sea known as an erg that formed during the Early Jurassic (just slightly younger then the Kayenta Formation at ~180 million years old). This sand sea was larger than the present day Sahara Desert. 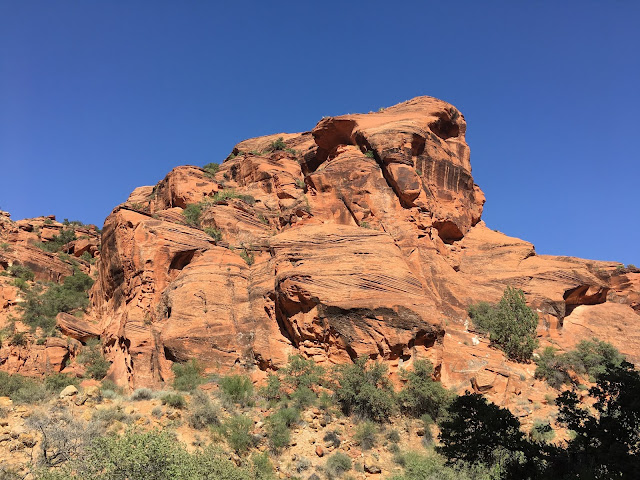 The Navajo is very well known because of the desert features that are so well preserved in it. The most notable is the cross bedding, which is seen in the pictures above and below. Cross-bedding is a depositional feature of sand that forms during the creation of sand dunes. When wind blows sand, the sand bounces along the ground rolling up the side of a dune (the windward side of the dune). Eventually, it reaches the crest of the dune, and falls over the crest of the dune (the slipface or leeward side of the dune). On the slipface, the grains of sand all form into little parallel rows that curve down at the base. These curved lines are what we see when we are looking at cross beds.
The different sets of curved lines represent different generations of sand dunes that passed through this area. As winds change, frequently with different seasons, the sand dune migrate in different directions along with the wind. These changing sand dune migrations cause the erosion of previous sand dunes, however the bases of some of the sand dunes may be left behind, which is what is then preserved into rock. Then future sand dunes travel over the old dunes, creating new cross beds. 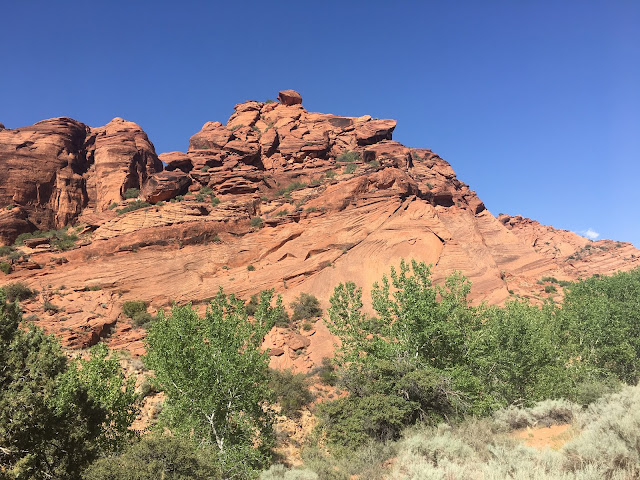 These sand grains are cemented with other minerals, often calcite or silica (quartz), creating the rock known as sandstone. Because of the nature of these rocks, the cement will often not fill all, or even most, or the pore spaces, creating a very porous rock. This is one of the reasons that sandstone is a popular water or oil/gas repository known as an aquifer. 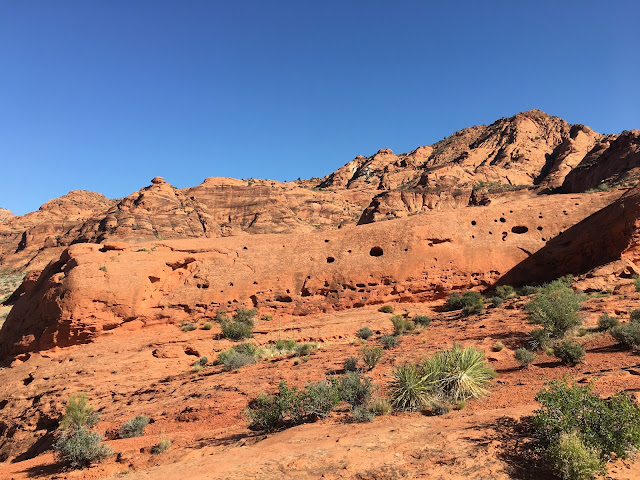 The Navajo Sandstone is also known for these pockmark features along it's surface. This is a type of weathering known as honeycomb weathering. Honeycomb weather is produced as water wicks into the porous rock and dissolves the calcite cement holding the grains together. Eventually the dissolution of the cement allows for the grains to be washed away with future rain events. 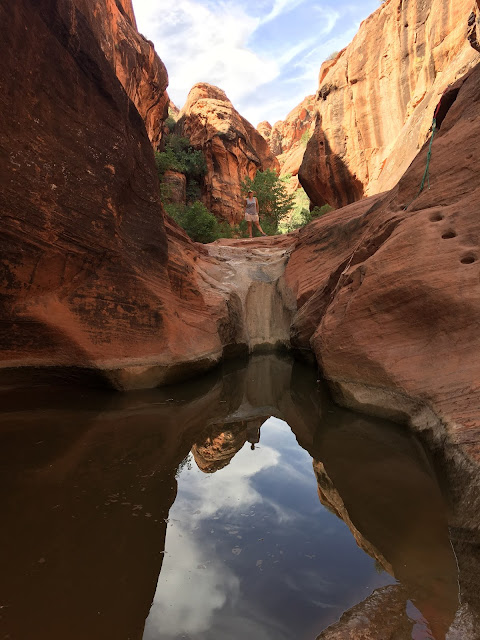 One of the cool features of southern Utah is the ability to hike these gorgeous rock units that have remained mostly intact due to the low amounts of precipitation that the area gets. This low amount of precipitation also produces such gorgeous features such as these slot canyons which are a small hike towards the north of the campgrounds called the Red Cliffs hiking trail. The hike continues up the canyon, however it gets a bit harder from here as evidenced by the hand and footholds carved into the rock on the right and the rope used to get up to the top of this little waterfall. 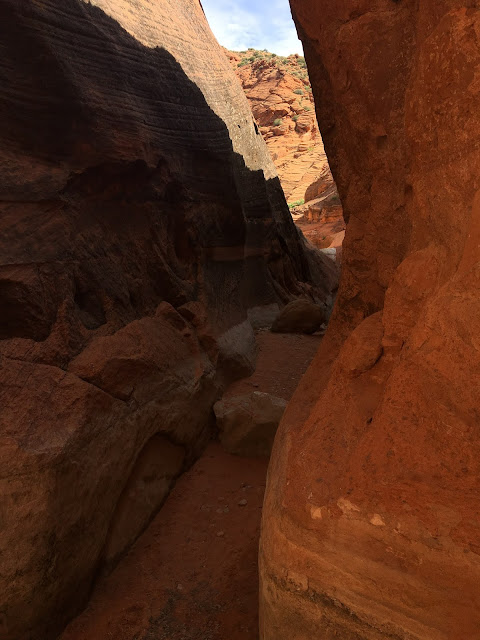 But as the hike continues it is a gorgeous way to soak in the geology. And generally I have noticed that the crowds are fairly small, especially due to the small size of the campgrounds. Sandstone has a tendency to fracture along naturally occurring joints in the rocks. The joints are then further widened by streams flowing through the area creating the slot canyons as they are seen today.

A little bit of a ways to the south of the Red Cliffs Recreation Area is the Quail Creek Reservoir, which is a great place to spend the afternoon. They allow boating and swimming, but what I want to focus on is this great anticline across the water. We are looking towards the northeast but the anticline cuts right through the middle of the reservoir basically towards where I am standing. These are Triassic age rocks of the Moenkopi Formation and the Chinle Formation, which are older than the rocks found just to the north in Red Cliff Recreation Area and would be located below those rocks.