Anyone who has been to the Big Island of Hawaii can attest to this as well, but the shear number of lava flows all over the island is simply breathtaking. As a geologist I may have pulled the car over an exorbitant number of times to get random photos of lava flows everywhere we went.

And with all of the lava flows dating from today to back thousands, tens of thousands, and millions of years, Hawaii offers a spectacular opportunity to see how basalt and lava flows age over time. Although Hawaii is a tropical paradise, in places, it also has a wide variety of environments, especially on the Big Island. Due to the rain shadow effect, the eastern portion of the Big Island has a tendency to see a lot more rain with the western portion of the island being more akin to a desert. Therefore the breakdown of the lava flows on the western portion of the island takes a lot longer and we can see the individual stages of breakdown much clearer.
The lava flow pictured above is located on the northwestern part of the island along the coast where the Mauna Loa lava flows sneak through Mauna Kea and Hualalai. 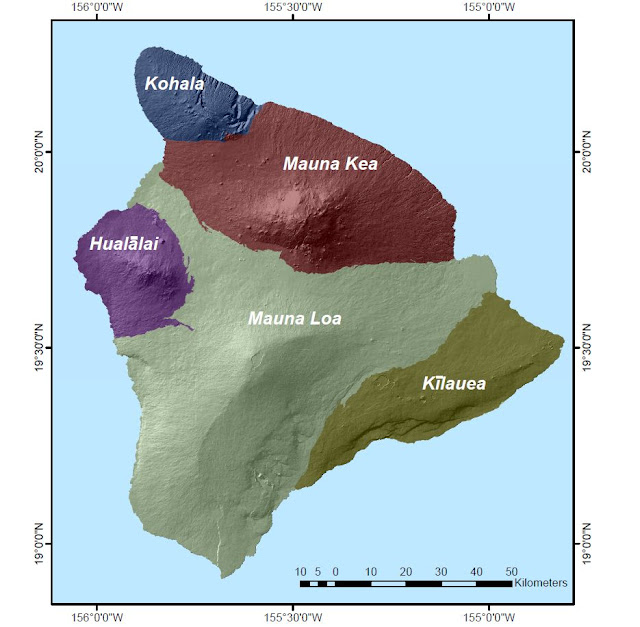 Look closer at the geological map of the area (below) we can see the above lava flow at Location A. Here we have two generations of Kau Basalts. The Kau Basalts are the geological name of the lava flows from Mauna Loa. The "fresh" looking lava flows are dated to 1859 CE (AKA AD 1859), meaning these really are fresh. And you can see the fantastic contact with the older lava flows beneath it, dated from 11,000 to 30,000 years ago. Even though the older lava flows date to the Ice Age, you can see that they have really only have sparse vegetation growing within them.
Here is another view of the 1859 lava flow. Here the lava flow is basaltic and consists of 'a'a lava, which is a blocky, sharp edged type of volcanic eruption. Mostly all of the lava on Hawaii is basaltic, meaning that it has a low silica content (quartz), is dark in color, has a high iron and manganese content, and has a low viscosity, meaning it flows really well. So many of the lava flows on the island are rather thin, which gives you an impression of how many lava flows it takes to makes an island this big. When you have basaltic lava flows constantly piling up on top of each other you create a type of volcano known as a shield volcano, named for the slight curve to the peak, similar to a shield.
The older lava flow is a type of lava flow known as pahoehow. Pahoehoe lava has a smoother, ropier texture than the 'a'a. The two types of lava flows (pahoehoe and 'a'a) do not differ chemically at all, they are formed during variations in the eruption process. But these two lava's do weather remarkably differently. The older pahoehoe lava seems to still be intact in many places near the contact with the fresher 1859 lava flow.

Comparing the much older Kua Basalt to the nearby Hualalai Volcanics at site B, just to the south, gives us a clear view as to how much that difference in eruption can impact it in the long term. Pictured above is the 5,000 to 10,000 year old 'a'a Hualalai Volcanics from the Hualalai Volcano. These lava flows are aged in between the two lava flows above and have started to "rust". This is because of the high iron content within basaltic lava flows that over time the can turn red if exposed to the elements for a long time. This breakdown also allows for the soil to begin to develop. This breakdown process seems to have completely destroyed the original lava flow texture here, while the much older pahoehoe lava are still relatively intact, although with plants growing through cracks in the surface. 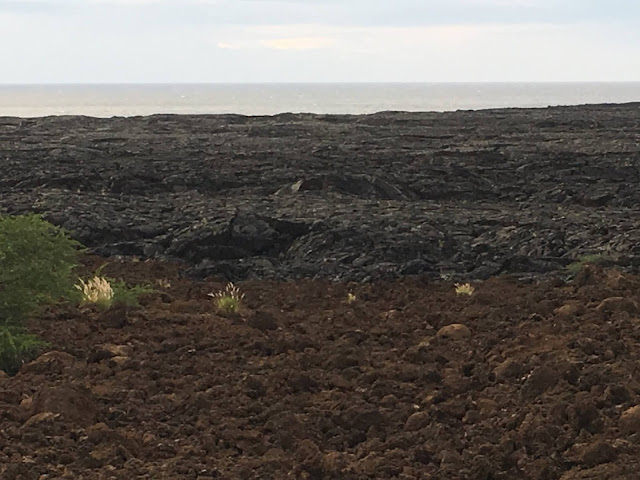 Here we can see the reddish Hualalai Volcanics with the southern extent of the Kua Basalt 1859 CE overlapping on top of it. This location is where the Mauna Loa lava flows are wrapping around the backside of the much smaller Hualalai Volcano before hitting the coast.
As you can see above, the island is a mishmash of lava flows stemming from five different volcanos that have been ongoing for thousands and millions of years. And it's super awesome to get to experience that in person. 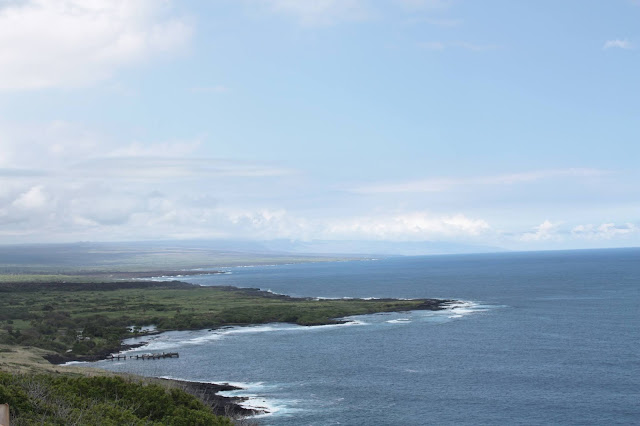 And I'll leave this post with one last lava flow. This one is along the southeastern shore of the island, nearby to Punalu'u Black Sand Beach. Here we are looking at a 3,000 to 5,000 years old Kua Basalt from Mauna Loa sticking out into the Pacific Ocean.
at December 15, 2020