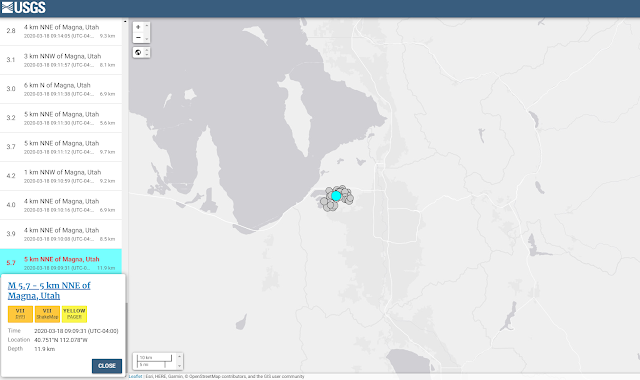 On the morning of March 18th, 2020 at 7:09 am local (MST) time, western Salt Lake County was hit with a 5.7 magnitude earthquake. At the time we lived in the valley to the west, not 13 miles from the epicenter of the earthquake. The epicenter is the spot on the surface directly above where the fault moved (known as the focus). Earthquakes occur due to energy that is released after a slip occurs along a fault. This energy produces shaking in the ground, both up and down, side to side, and back and forth. This motion of the ground is what we feel on the surface. 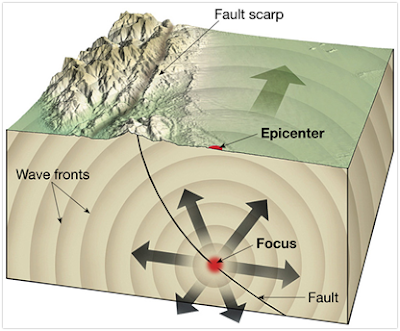 Upon the start of the earthquake we were getting ready for our day. The wife was getting ready for work, the child, having off of school that week for spring break, was playing in her room, and I was still in bed. Upon the start of shaking I jumped out of bed and grabbed her from her room into the doorframe of my bedroom since our bedrooms were directly across the hall from each other.
The doorframe is one of the safest locations in a home during an earthquake because structurally it is one of the strongest spots. Lights, parts of ceiling, pictures, and stuff on shelves are less likely to fall on you in a door frame. Walls are also less likely to collapse there. Under a desk or table is also another safe location for the same reason, the structure will provide protection from falling objects. Running outside is actually a terrible idea because the initial shaking of an earthquake only lasts a couple of minutes at most, and in that time you won't get very far and around the outside of a building is the most dangerous place to be since things like bricks can fall off a building and glass can break from windows. So, stay put in a safe location, if possible. 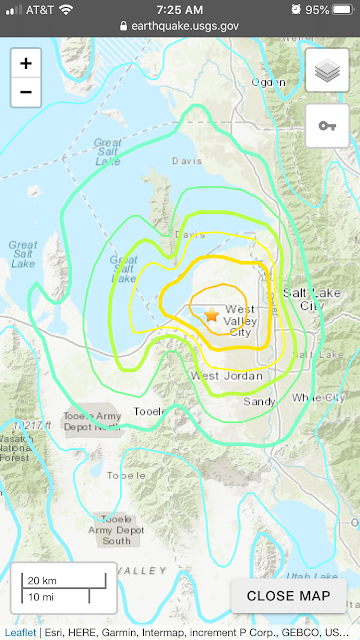 Above is the initial shake map from the earthquake from the USGS. Earthquake.usgs.gov is my favorite website for quickly identifying earthquakes and their sizes and locations. The website is updated within about 5 minutes of an earthquake. This is also helpful during the numerous aftershocks we felt to wonder if they were an actual aftershock or just a passing truck. The shake map tells you the location and the size of the earthquake, as well as how far away it was likely felt. This information will get refined over the coming hours and days as more information is obtained.
One of the things about an earthquake that I never realized is that I was constantly feeling aftershocks for months afterwards, regardless if we actually had them or not. Having never been in an earthquake, I thought it would be super cool as a geologist to be part of one. I was wrong. It was terrifying. And still is, because there is no warning and no way to really get mentally prepared except to have everything you need in the event that one happens and your home or place of work to be structurally prepared. 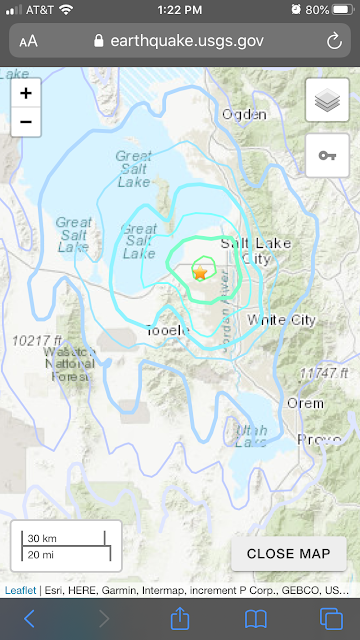 Within a few hours the area was inundated with aftershocks including four of a magnitude 4.0 or greater. The above map represents the shake map of the 4.6 aftershock that hit in the afternoon of March 18th. 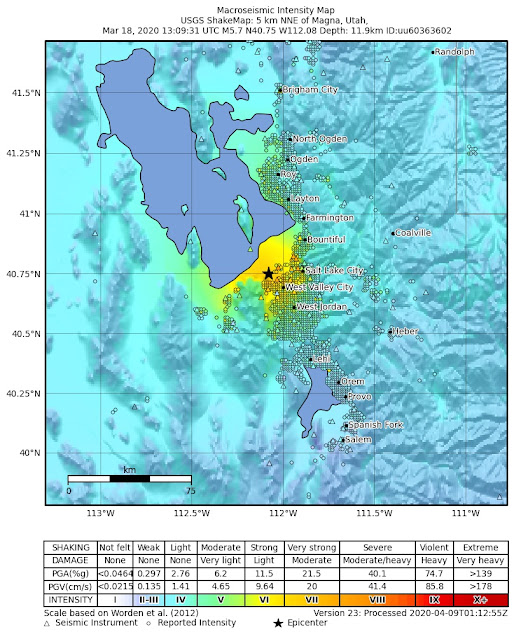 Above is the most up to date shake map of the main, 5.7 Magnitude earthquake. This is what is called a Modified Mercalli Map, which uses people's real life experiences to help shape the impact of the event. If something fell of a shelf in your house you would have felt a different different level of intensity than if your entire house fell down. Each of those dots represent points of data where someone contributed to the map. If you are a part of an earthquake, this is a great way for everyday citizens to participate in citizen science at USGS's Did You Feel It.
As identified by the University of Utah Seismographic Station, there were over 2,500 earthquakes that took place in the same area from March 18th through the following year.
Of all those 2,500+ earthquakes, all but one was identified as an aftershock, the one being the main event earthquake. An aftershock is an earthquake along the same fault line that occurs after the main earthquake and is always lower in intensity. If for some reason we had an earthquake that was a 6.0 after the 5.7, the 6.0 would not be considered an aftershock. At that point the 5.7 would be renamed a foreshock (taking place before the main earthquake) and the 6.0 would become the main earthquake. So in actuality, aftershocks are only identifiable as such as long as they are smaller than the main earthquake and to understand the entire picture of an earthquake, some time has to progress until we see all of the impacted fault movement and earthquakes.
Geologically speaking, Utah is located along the eastern edge of what is called the Basin and Range Province. This is an area that is actively undergoing extension. Meaning the the plate is essentially being stretched apart here. The result of which is what we see, a series of parallel, north-south running mountain ranges with valleys in between. Intermixed with all of this is a series of volcanic eruptions occurring all over the region due to the thinning crust. I had covered a bunch of Utah's volcanic legacy in a previous post HERE.
The types of faults most commonly associated with this type of extensional activity is known as a Normal Fault.

A Normal Fault is where the overriding block (the hanging wall or head wall) moves downward in relation to the under-riding block (the footwall).
Along the eastern edge of the Salt Lake Valley is the Wasatch Fault, the largest fault in the region, and also a Normal Fault. Generally it is considered a "fault zone" because of all of the offshoots and short segments of the fault, especially since scientists are not 100% sure about where exactly the fault is located in all locations.
Where the fault does hit the surface in a fairly well identified area is in the eastern edge of Salt Lake City, where a fault scarp can plainly be seen. A fault scarp is the cliff or surface disruption along the surface rupture of the fault where the two blocks can easily be identified, as in the picture above, because the one block juts up compared to the other block. But a fault isn't likely to cause an earthquake just where it surfaces. The fault also extends many miles below ground. And as can be seen in the diagram above and below, the Wasatch Fault curves towards the west, below the Salt Lake Valley.
And that is where the earthquake of March 18th occurred on. The movement occurred on the Wasatch Fault, but it occurred 6 miles (10 km)  below the surface. This is the reason why although the fault lies along the eastern part of the Salt Lake Valley on the surface, the earthquake occurred almost on the western edge of the valley on the same fault.
Right now it is estimated that an earthquake of a 7.0 to a 7.6 will occur sometime in the future along the Wasatch Fault Zone. This is based on historical estimates of the previous earthquakes along the fault and size estimates based on the size of the fault. Earthquakes are only able to generate energy based on the size of the fault. The larger the fault, the larger the potential earthquake. So, based on the size of the Wasatch Fault, a 7.6 would be the maximum size that an earthquake could be. However, that would be detrimental to the region because many buildings and other infrastructure are not built to withstand an earthquake of that magnitude.
The odds of a 7.0 earthquake occurring within our lifetimes is generally on the low side, though. So, although there is no reason to constantly live in fear, there is reason to build our community with earthquake resiliency in mind. Especially since our buildings will hopefully far outlast us.
at November 11, 2021