Geology in the Wild - The Thistle Landslide

Landslides are unfortunately a common problem around the globe, especially in areas of growth where humans alter the landscape. But landslides can happen even when there isn't human activity to artificially steepen slopes or reduce the cohesiveness of the land surface. One such landslide was the Thistle Landslide, that ended up destroying the town of Thistle, Utah. 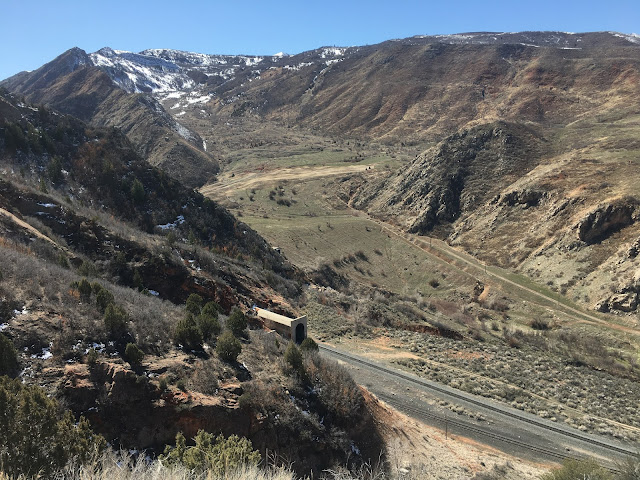 The picture above is overlooking the landslide itself, which came down the valley in the center of the picture. The landslide filled the Spanish Fork River valley, which is located down below the train tracks as seen here. Fall of 1982 and winter/spring of 1983 had been extra wet, and a late snowfall in April along with a quick thaw caused 15 million cubic meters of earth to start sliding down the slope. The valley was populated with eroded debris from the North Horn and Ankareh Formations (a mixture of shales, silstones, and sandstones) that were nestled in a "trough-shaped depression", AKA a paleovalley.

The slide started on April 13th, causing the Denver and Rio Grande Western Railroad tracks to start shifting over a few inches (the railroad was previously located further downslope than it is located today). By the 15th, the railroad had been shut down and the surface of the road, Highway 6, (also located along the valley floor) started to buckle. By the 17th, despite attempts at dredging the river, it was deemed impossible and the town of Thistle, located around the mountain towards the left of the photo, was abandoned. The landslide drowned the houses of Thistle and the entire town was left as a ghost town. At top speed the landslide reached speeds of 3.5 feet per hour and was 1000 feet wide, 200 feet thick, and over a mile long. The part of the landslide that dammed the Spanish Fork River edned up being about 220 feet high.
After the landslide, the railroad and river had to be rerouted through the mountain as seen in the image above and the highway was rerouted to just behind where I took the picture. In total, direct damage cost over $200 million (in 1983 dollars) and remains one of the costliest landslide in US history.
References
https://www.wunderground.com/blog/weatherhistorian/worst-landslides-in-us-history.html
https://www.utahhumanities.org/stories/items/show/94#:~:text=A%20giant%20landslide%20in%20April,Salt%20Lake%20City%20with%20Denver.&text=By%20Sunday%2C%20Thistle's%20fate%20was%20sealed
https://geology.utah.gov/map-pub/survey-notes/geosights/thistle-landslide/
http://luirig.altervista.org/pics/index4.php?search=Thistle,+Utah,+landslide+April+1983.+Lake+Thistle+was+created...&page=1
at December 05, 2021

Email ThisBlogThis!Share to TwitterShare to FacebookShare to Pinterest
Labels: Geology in the Wild, Landslide