Geology of the National Parks Through Pictures - Lincoln Memorial 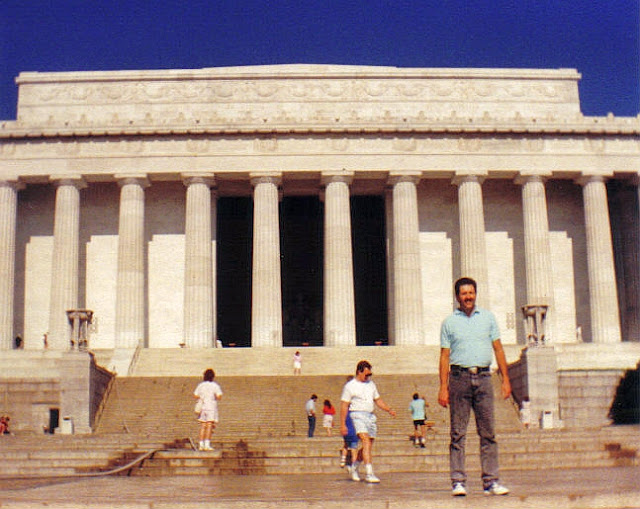 1. The terrace walls and lower steps are comprised of the Milford Pink Granite from Massachusetts. Granite is the state building stone of Massachusetts. The granite is a 630 million year old, Proterozoic igneous rock located in and around Milford, MA, covering an area of ~100 km2. The granite was initially discovered in the 1870's and was noted for its pink quality, although there is variation within the body. The colors range from light-gray to pale orange-pink. 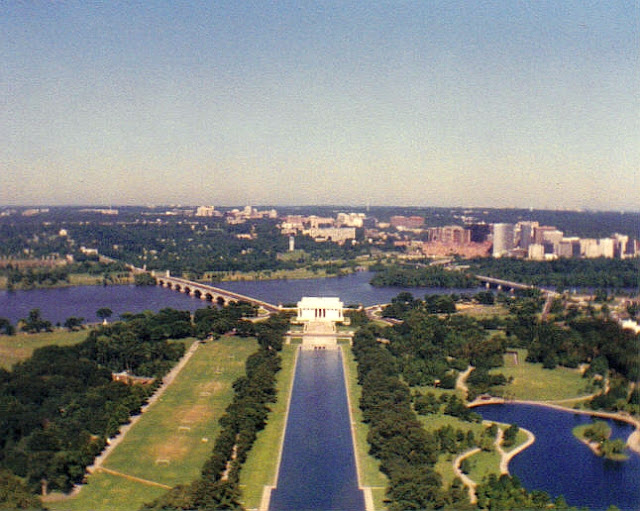 View of the Lincoln Memorial from the top of the Washington Monument.

3. The floor is pink Tennessee Marble. The Tennessee Pink Marble is interesting in that it actually isn't marble, it is a limestone, meaning it was never metamorphosed like the Yule Marble. Limestone is the state rock of Tennessee as well. The "marble" even includes such sedimentary structures as cross bedding, bryozoan fossils, crinoid fossils, and stylolites. The rock is part of the Holston Formation, which formed 460 million years ago during the Middle Ordovician, along the continental shelf of Laurentia (the northern continent). The Tennessee Pink Marble has been quarried along the eastern part of Tennessee, near Knoxville.

4. The interior walls and columns are made from Indiana Limestone, also known as the Salem Formation. The Salem Formation is a Middle Mississippian age (335-340 million year old) light-grey to bluish-grey pure calcarenite limestone that crops out between Bloomington and Bedford in the south-central portion of Indiana. Quarrying of the stone began in 1827 and has continued up to the present day with nine different quarries all mining the same formation. Indiana Limestone is a "freestone", which means that there is no preferential cracking, jointing, or splitting. This also means that blocks of the limestone can be planed, hand-worked, or otherwise manipulated without fear of the rock breaking in a preferential direction. The limestone is 97% pure calcite with microscopic foraminifera and bryozoan fossils found throughout. 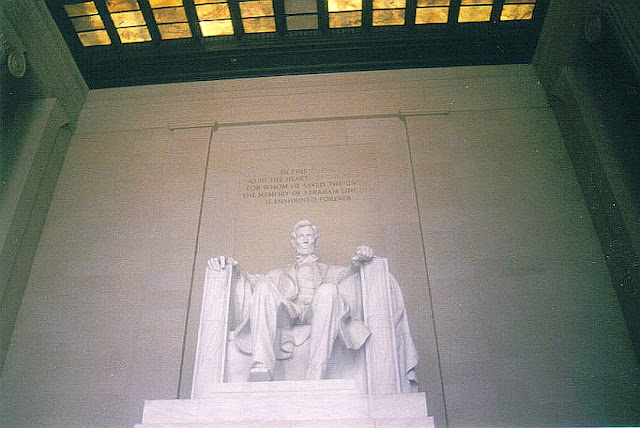 5. The ceiling tiles are Alabama Marble. Marble also happens to be the state rock of Alabama. Alabama Marble, also known as Sylacauga Marble, is named for the town Sylacauga and has been called the "whitest marble in the world" for its purity. The marble formed during metamorphism associated with the Appalachian orogen (mountain building) and is approximately Cambrian to Ordovician in age. Besides the pure white sections of the marble, there are also sections that have green, pink, gray, black, and gold veins in the ~5.5 cubic mile deposit. Official descriptions of the marble state it as "white and pale-blue to light-gray calcite marble, locally containing interlayered dolomite marble and thin phyllite layers".

6. The statue of Lincoln is composed of 28 pieces of Georgia Marble. Although there are several different "varieties" of marble within Georgia, they all seem to be variations of the same marble deposit, Murphy Marble. The Murphy Marble Belt runs from North Carolina down through Georgia and centers on Tate, Georgia, where the Georgia Marble Company mines the marble. It is the Georgia Mining Company that provided the marble for the Lincoln statue. The specific variety of marble for the Lincoln statue comes from the Cherokee White Quarry, which is mixed in among folded gneisses and schists within the Murphy Marble Belt. The Cherokee White Marble is a partly dolominitic but nearly pure calcite marble. These marbles have been extensively quarried since 1840. The Murphy Marble started off as a Lower Cambrian limestone that was eventually metamorphosed and folded numerous times during the lower Paleozoic from the Middle Ordovician through the Early Mississippian.