Geology of the National Parks Through Pictures - Russell Cave

Unfortunately this is the only National Park I have visited in Alabama but eventually there will be more.


Russell Cave National Monument
During a trip to Chattanooga for my wife's Ironman race, we took a tour of some of the nearby National Parks. This included a brief foray into Alabama to see the small, but cool Russell Cave. 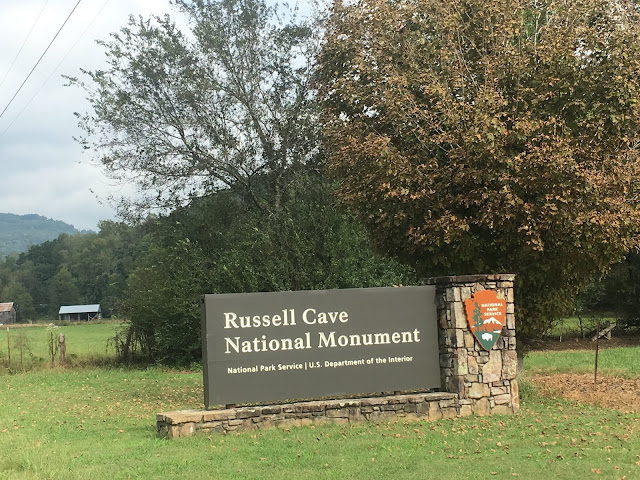 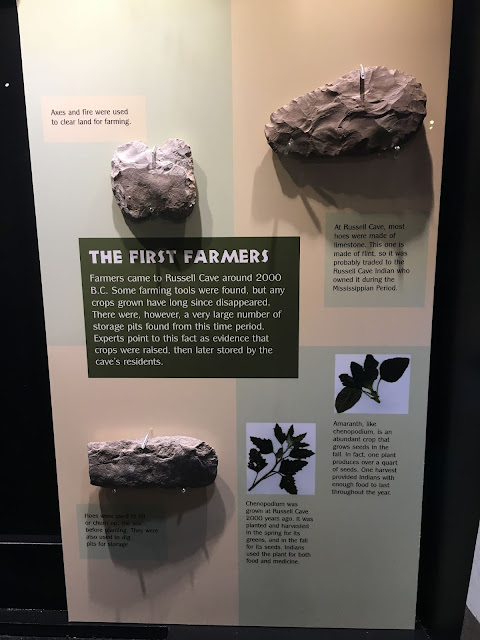 Within the museum and visitor's center there are several panels of artifacts explaining about the Native People who used to live in the caves and how geology was related to their lives. Here the first farmers are mentioned who used nearby flint (a silica/quartz based rock that is very hard and can be broken to have very thin and sharp edges) and limestone (the rock the caves were formed within) as materials to make tools. 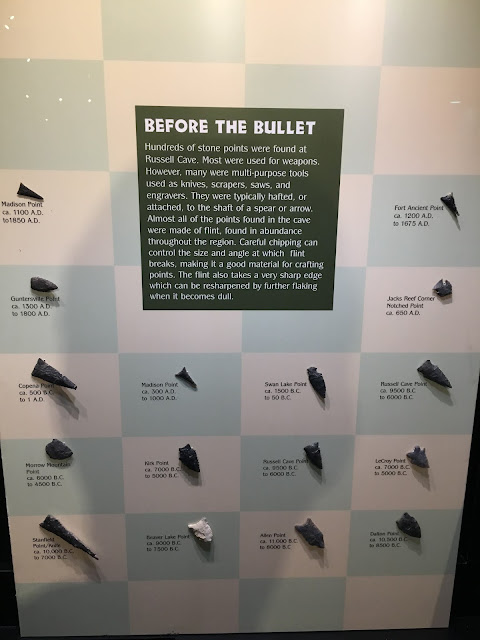 More use of geology, this time for of weapons and more tools. These were also used from nearby flint deposits. 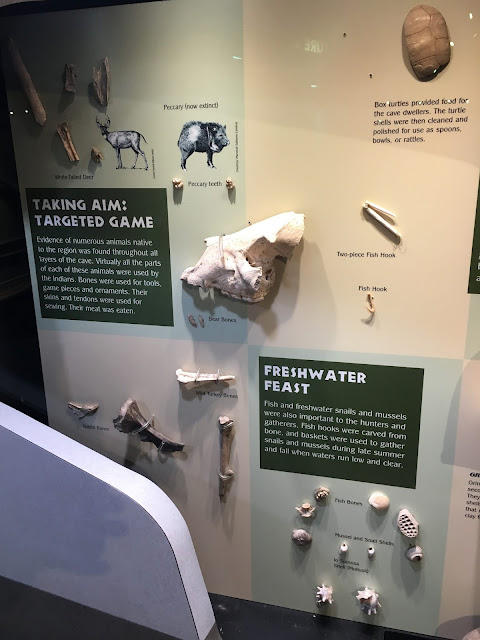 Here are the remains of many of the animals found within the caves that the Native People used for food. 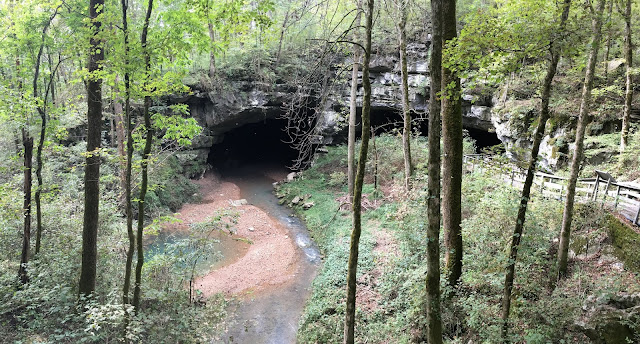 Here is the main mouth of Russell Cave as you walk up to it from the trail. The entrance has a very large cave mouth and was primarily the place where the Native People resided. Despite Russell Cave being the 19th longest cave in the US, most to nearly all of the activity was at the mouth. 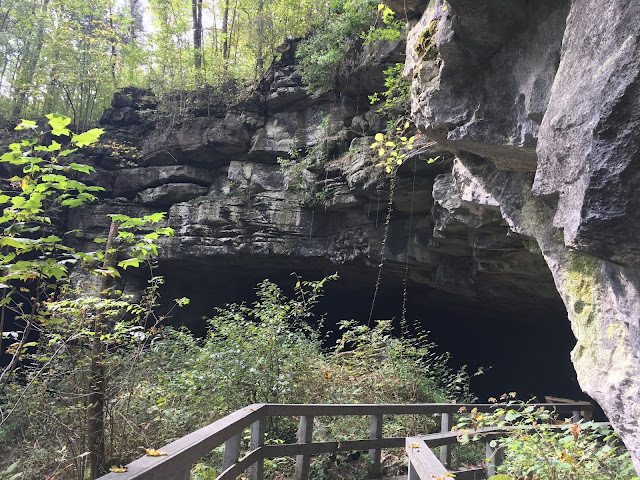 Here is another shot of the cave right before going in.

View from the edge of the cave. Most caves are formed by the dissolution of limestone from running water. In this instance the creek is visible in the previous photo which caused the dissolution. The limestone here can be broken up into three different rock units: the Monteagle Limestone, the Bangor Limestone, and the Pennington Formation. All of these units are Mississippian in age (over 300 million years old). The overlying rock is a sandstone. The overlying rock is a very important part of cave formation because without a sturdy roof rock that resists fracturing, the dissolution of the cave would just cause the entire ground to collapse and no cave could be form. The sandstone is younger than the limestone (hence it being on top) and is Pennsylvanian in age and called the Pottsville Formation (npshistory.com) 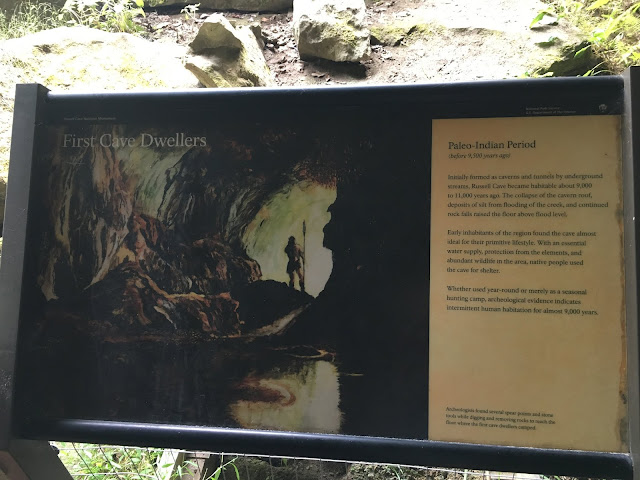 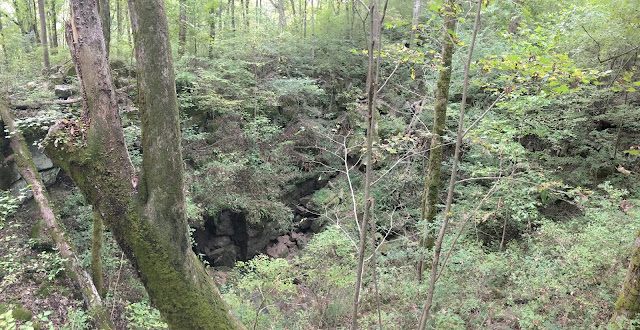 A couple of hundred feet away from the main entrance is this sinkhole that you can see within the forested area. Here the cave roof, the sandstone, was not strong enough to hold itself up over the dissolved rock and collapsed into the hole below. 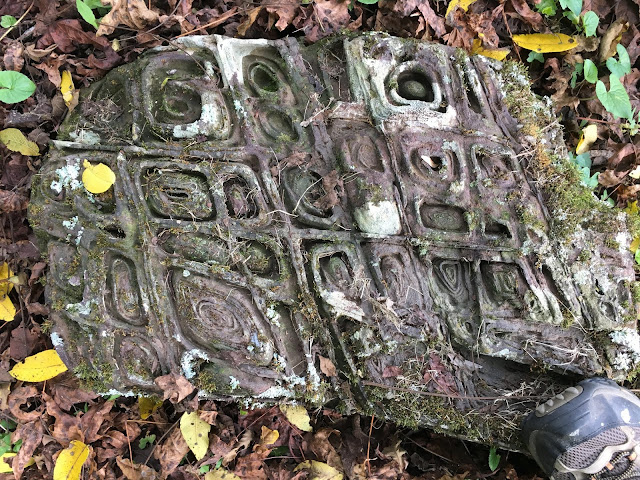 Now this is an interesting rock that was just outside the visitor's center. The park service people placed it here on purpose right near a sign explaining it. It is a rock filled with these features called septarian concretions. Concretions are blocks of rock that form from the continued precipitation of minerals along the outer surface of the rock. They often form from hard minerals in softer rocks (such as calcite in a shale) and then when the softer rocks erode away, it leaves behind the concretion. Septarian concretions form in a similar manner, except that they have periods of contractions and expansions which produced cracks or stress fractures within the concretions themselves. These fractures will also fill with the precipitated minerals, producing these banded concretions of different minerals. As these minerals erode, they will erode at different rates all in relation to the hardness of the mineral being eroded producing this onion effect in the rock.