Geology of the National Parks Through Pictures - Colorado National Monument

My next post about the Geology of the National Parks Through Pictures is a park we decided to go to during the quarantine when we wanted to get out but were limited on our social distancing options for Father's Day weekend. Turns out Colorado National Monument was the perfect location.

Colorado National Monument
Colorado National Monument is a park we had driven near a few times but never actually gone to before now, not realizing how truly beautiful it was. The overlooks are simply astounding and everything about the park screams geology. It is directly outside Grand Junction and Fruita, Colorado and is a quick jump from either of those cities in SW Colorado. 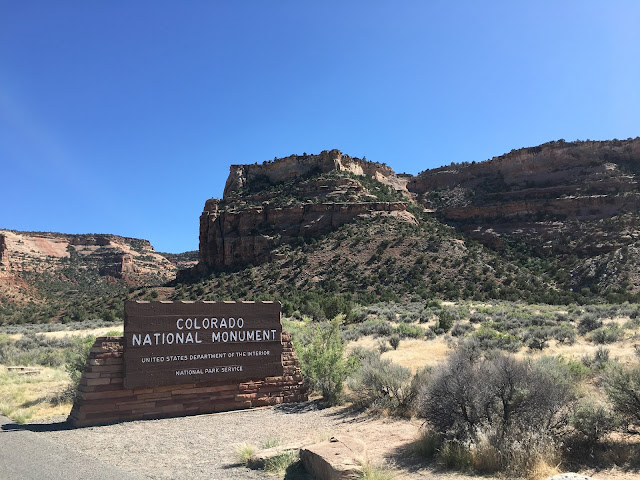 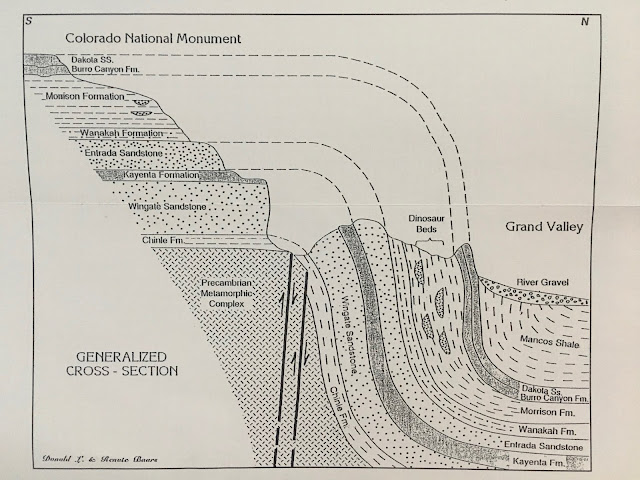 Colorado National Monument is an interesting park. Most of the park is located on top of a high cliff that looks out over the Grand Valley where Fruita and Grand Junction are located. The reason for the high cliff is that the park resides on the upturned side of a giant fold. Within geology as a whole, there are several different types of folds within rock units. The most common folds are the syncline, when the rocks are bent like a "U", and the anticline, where the rocks are bent the other way like an "A". The Colorado National Monument fold is a different type of fold though, known as a monocline, where only one edge of the fold is bent. It's like an anticline with only half of the "A" is bent. You can see the cross section of rocks within the fold and the park. The oldest rocks of the fold are those located near the valley floors, which are the Upper Triassic age Chinle Formation (~200 million years old). The rock units progressively get younger until you get to the top layer of the fold, represented by the Cretaceous age Dakota Sandstone (~100 million years old). You can see the rocks in this park cover a large span of time. Image from the Rock Layers of the Monument brochure from the NPS.

View of Independence Rock from Otto's Trail. Within these large formations here we have a series of rocks. The base of the valleys are the really old rocks. Below the Chinle Formation described above is some Precambrian metamorphic rocks called the Black Canyon Group. These include gneiss, dark schists, and light pegmatites, which are all extremely hard, erosion resistant rocks. The Black Canyon Group is estimated to be 1.7 billion years old. The erosion resistance of these rocks are what caused the erosion of the valleys to essentially stall once it reached this level, unable to erode very quickly through the metamorphic layer. 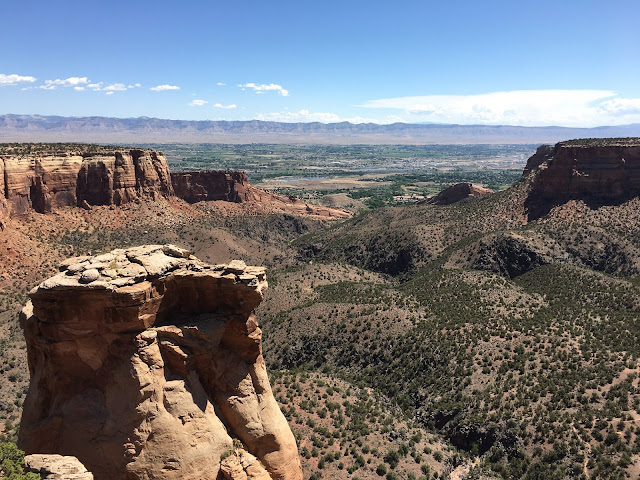 Here is a view from a little further down the main road at Grand View. I love these types of stops because they provide a display with the geology overlaid on the rocks as you see them. A picture of the geology sign is directly below to compare. Directly above the Chinle Formation is where the cliffs start. This is the Wingate Sandstone. The Wingate is a very thick bed of dune sandstone from a prehistoric desert deposited during the Lower Jurassic. Most of the geologic formations within this park are located within the Wingate. 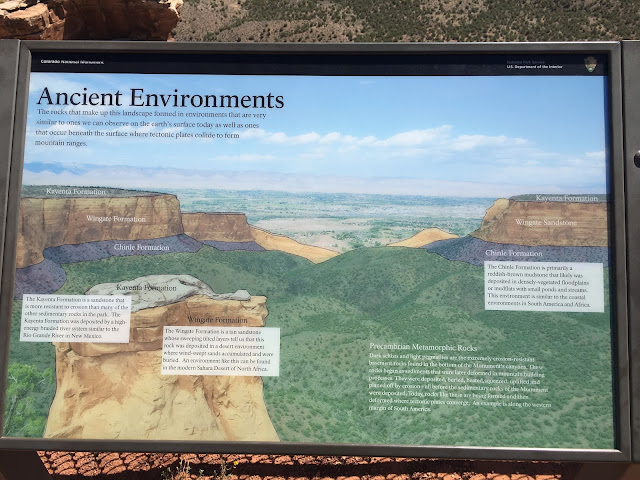 The Wingate continues up until a slight color change in the rocks can be seen near the top of the cliff. The rocks on the very top here are more grey in color than the yellow of the Wingate. This is the Kayenta Formation, another sandstone but with more shale and conglomerate mixed in. The Kayenta Formation represents a period of time when the environment started to bounce back from the Wingate desert and rains started to fall a bit more.

Here is a view from the Grand View looking back towards the cliff edge. You can see here the next series of rock units above the Kayenta Formation. This is the Entrada Sandstone, seen here most clearly on the right hand portion of the photograph as the smooth yellow sandstone cliff face just below a thin strip of green plants at the top of the rock series. The Entrada Sandstone is a Middle Jurassic aged sandstone (~150 million years old) that was deposited from the dunes of a nearby sea. This is the same rock formation that the arches are from at Arches National Park. 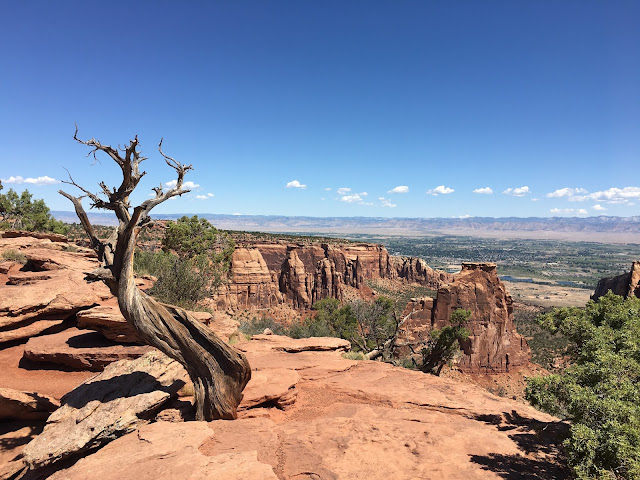 View from the Grand View looking towards the north at Fruita. 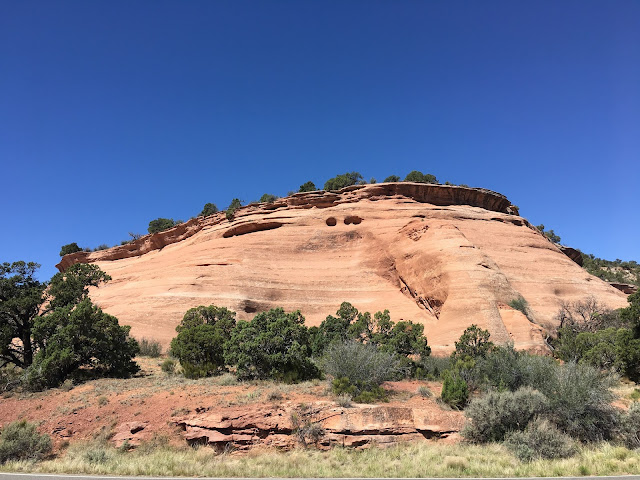 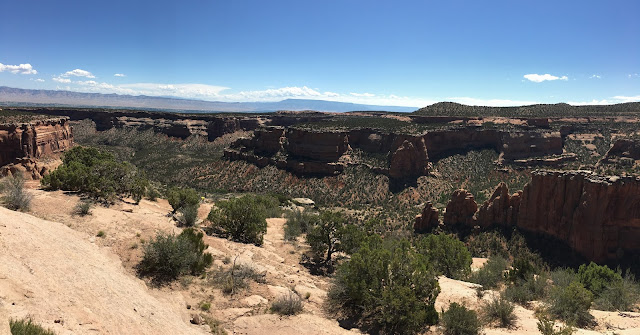 View of the canyon from Artist's Point looking down on the Wingate erosional features.

View of the canyon wall from Upper Ute Canyon overlook. Here we get a great shot of the Wingate Sandstone (large orangy yellow sandstone on the bottom) with the Entrada Sandstone (thinner orangy yellow sandstone on top (after a break of green plants and grey rocks, which are the Kayenta Formation). On top of the Entrada is the Wanakah, and on top of the Wanakah is the highest rock formation we can see within this portion of the park, the Morrison Formation. The Morrison Formation is an Upper Jurassic age (~155 million year old) series of mudstones and occasional sandstone lenses that is world famous for its dinosaur fossils. The Morrison Formation  ranged through several terrestrial environments including lake, river, and floodplain deposits. 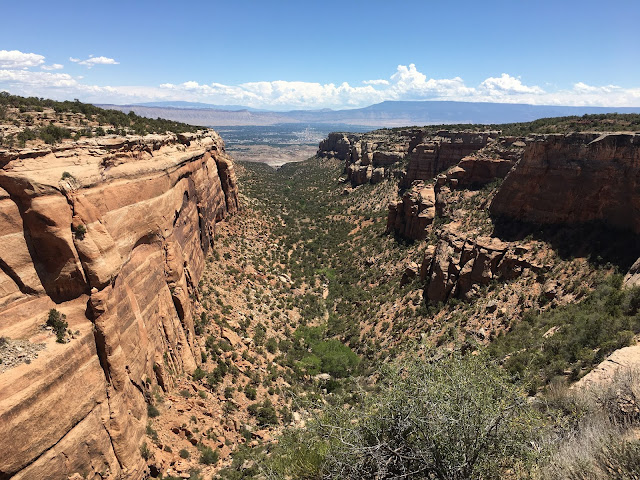 Here is another geological overlay view with the geology sign below. This area shows the Black Canyon Group, small bits of the Chinle Formation, the thick Wingate Sandstone, and topped with the Kayenta Formation. We have moved far enough to the southeast of the monument now that we are looking out onto Grand Junction instead of Fruita. 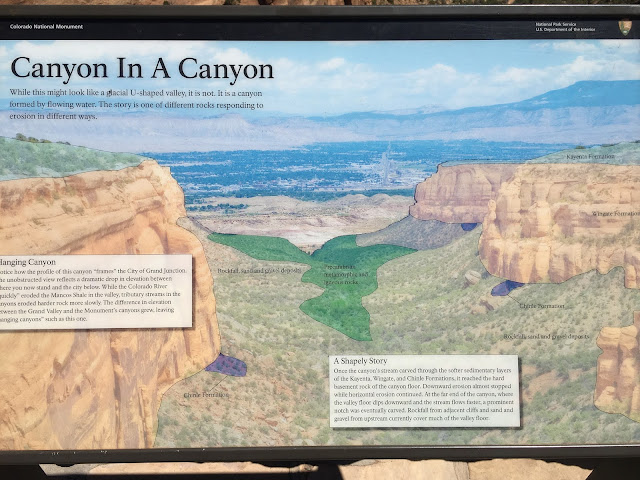 Geological overlay of the above image. 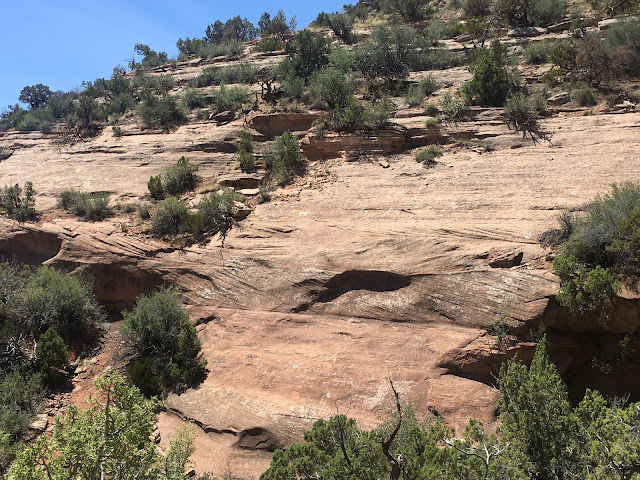 Here we get a closer look at some of the cross bedding within the Wingate Sandstone, the curved lines going through the rock unit. Cross-beds indicate that these rocks formed from sand that were once sand dunes that were eventually cemented together.

Below we will look at some of  the several fantastic erosional features throughout the park. 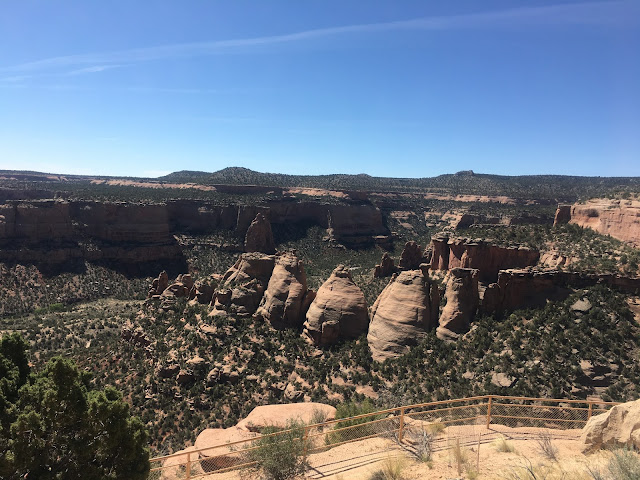 View of the Coke Ovens, which are geological erosional features that are reminiscent of the old coke ovens. Coke ovens are often beehive shaped structures that process coal by burning the impurities out of coal producing a product known as "coking coal" or just "coke". These features are within the Wingate Sandstone. 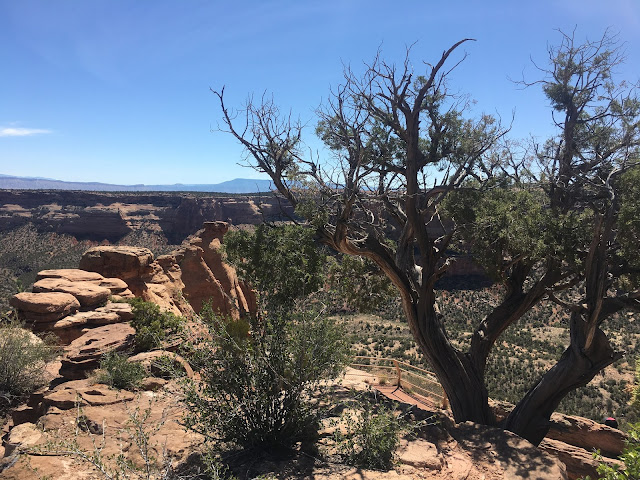 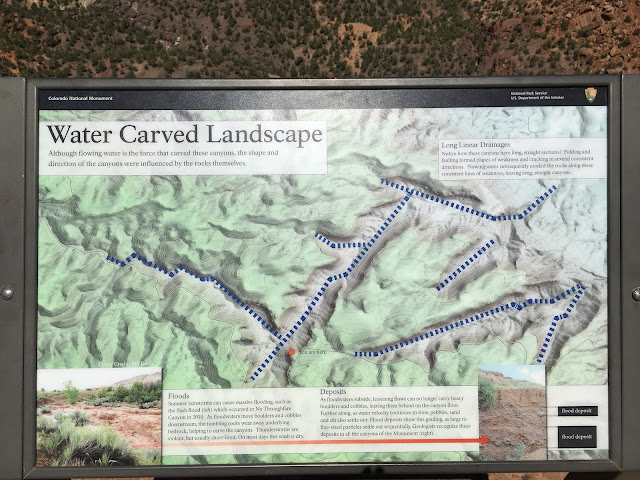 Within the rock units, the faulting and joints that formed as a result of the folding create areas where erosion is able to get a foothold. Once water then starts to consolidate within those cracks, valleys begin to form, further enhancing the cracks that were there. Sandstones, and other very hard rocks, have a tendency to fracture in a grid formation. This grid formation leads to erosion that follows that pattern, as seen here with river valleys forming a right angle to one another.

A physical view of the valleys seen in the image above. Once erosion proceeded vertically low enough, it hit the resistant Precambrian Black Canyon Group, and the erosion slowed drastically. Afterwards, erosion proceeded in a more horizontal direction, widening and lengthening the already existing valleys and canyons. 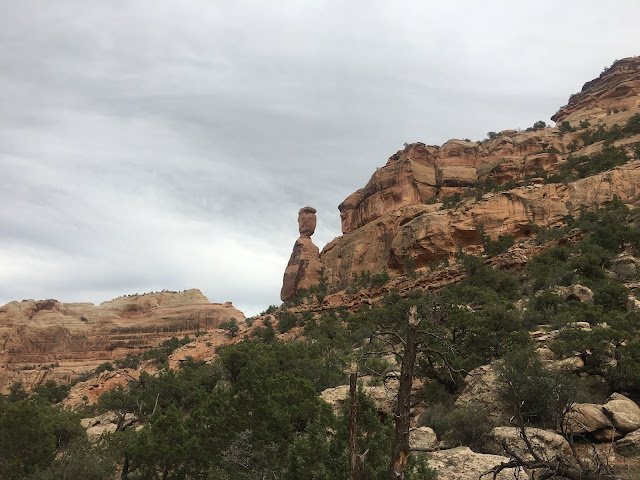 Natural joints and fractures within the rock allow erosion to slowly create spectacular features such as Balance Rock, located within the Wingate Sandstone. Water and wind erosion slowly expanded a fracture that was located between the rock and the main cliff face, leaving behind this precariously balance protrusion.

And the last of the erosional features that I'll highlight is Window Rock, an arch within the Wingate Sandstone, seen here on the left side of the photo. The trail to Window Rock leads you right up to the top of it, however since you are basically on top of the arch (the actual arch is off limits by a fence), it is difficult to get a nice photo of it. This is another instance of erosion removing material along a preexisting crack in the rock, widening it until an arch was formed.